Takuma Miyazono has come through to win the Asia-Oceania (ASOC) Regional Final in the 2020 FIA Gran Turismo Online Championship, to retain a remarkable 100% winning record in 2020.

The Japanese driver had won the only World Tour event this year, in Sydney back in February — already qualifying for the World Final as a result — and picked up where he left off with a pole position in the first race at the ASOC regional event ahead of Ryota Kokubun. Given that the race involved Group B race cars at Red Bull Ring, chaos seemed to be a sure thing.

However, the driving mainly proved respectful; in fact the biggest issue was the pre-race disconnection of Tomoaki Yamanaka, himself a world champion in 2019 with Toyota in the Manufacturer Series. Meanwhile, on the track, front Miyazono and 2018 regional champion Kokubun pulled out a handy gap to Cody Latkovski in third.

The Japanese duo largely maintained position until the closing stages. Kokubun, who’d barely been further than 0.3s behind Miyazono all race, made his move going into turn three on the final lap. The overtake last right the way through to turn nine before being settled in Kokubun’s favor. 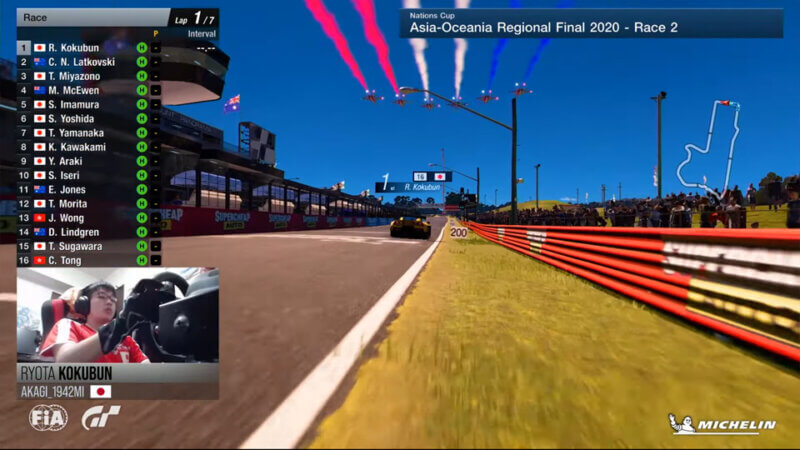 Kokubun took that form into the second race, a Gr.3 event at Mount Panorama. This time it was him on pole, with Latkovski in second and Miyazono back in third. However, it didn’t take long for Miyazono to sneak past Latkovski, taking advantage of a mistake on the exit of Hell corner and powering his Aston past before Griffins.

With overtaking at a premium around Mount Panorama — most opportunities coming at the top of the mountain, where there’s little space to capitalize on them — Latkovski was the head of quite the train in his Volkswagen Vision Gr.3 car. One man on the move though was Tomoaki Yamanaka, able to race this time round and slipping past Matthew McEwen through The Chase up into fifth.

Up front it was still the Kokubun/Miyazono show, with the duo finishing some three seconds up the road from Latkovski. Shunsuke Imamura, who’d spent several laps tucked under the VW’s rear wing in fourth, attempted a full send at The Chase but left it too late for his slipstream-enhanced speed and took to the grass to recover.

That all meant that the same three drivers finished in the top three in the same order in both of the opening races, with McEwen and Imamura tied for the fourth and final qualifying spot. 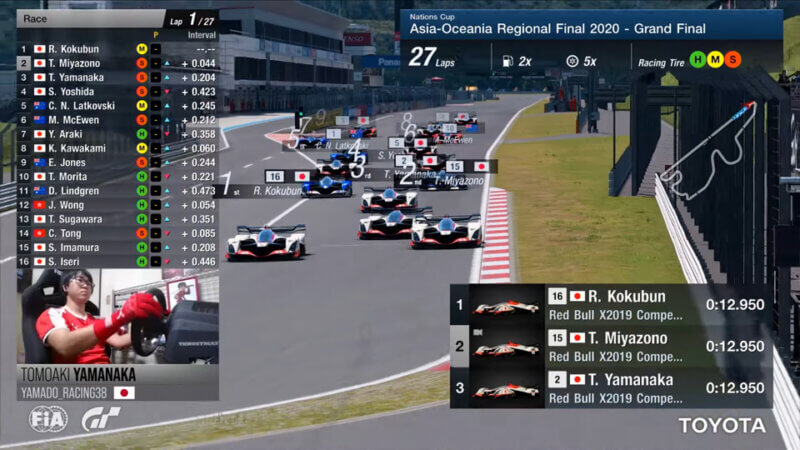 With Kokubun on fine form, it was little surprise that he managed pole position yet again for the final race. Also unsurprising was that Miyazono lined up behind him, but the recovering Yamanaka was in third and Shogo Yoshida completed the top-four Japanese lockout, ahead of fifth-place Latkovski.

Tire strategy plays a major role in these X2019 races, and Kokubun’s lead didn’t last for long. He’d chosen to go with the medium tires initially, and this allowed Yamanaka on the softs to hit the front leaving turn one, with Miyazono stuck on the outside of the corner behind Kokubun.

As expected, the soft-runners were queueing up to pass Kokubun, with Yoshida following Kokubun on the next lap, McEwen — who’d also got past medium-shod Latkovski — the lap after, and then Emily Jones on lap six.

The race took a curious turn as the pit stops started. Firstly Dylan Lindgren, then McEwen, then Jones, and finally Latkovski all picked up penalties from the stewards for ignoring the pit lane entry lines. That accounted for all of the Oceania drivers, and all picked up this penalty repeatedly through the race. The only one caught on the stream itself — Latkovski on lap 16 — looked for all the world like lag rather than deliberate cut, but the stewards seemed to disagree. 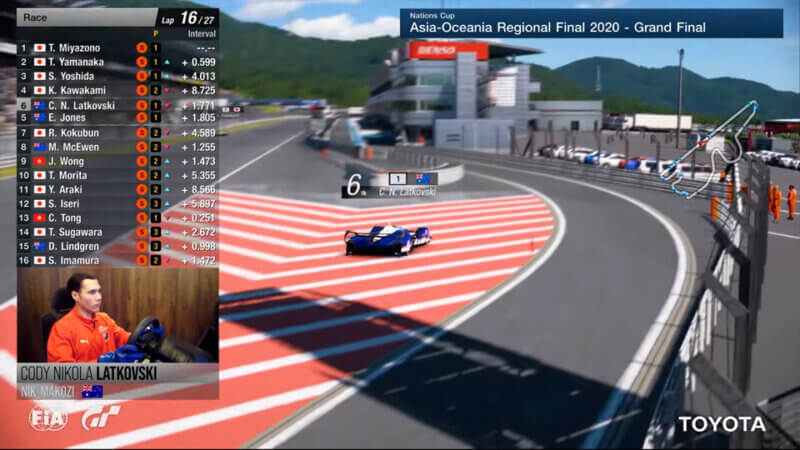 One driver not having pit lane troubles was Miyazono. Pitting a lap earlier than Yamanaka, he was able to put in a quick out-lap to jump past his countryman and into the race — and event — lead.

That was the cue for the middle section of the race, which traditionally quietens down somewhat as the various strategies create gaps throughout the field. However, it did give us a memorable moment as Jones, making a quick stop for her hard tires, hit the front to become the first female leader in Gran Turismo finals competition history, albeit for a few corners.

With a lap left to go, Yamanaka and Yoshida both pitted for their mandatory hard tire, promoting Miyazono back up into the lead. Both came out ahead of a charging Kokubun, running soft tires, and while he was able to clear Yoshida, Yamanaka proved harder to crack. Having missed the first race through disconnection, Yamanaka was able to keep hold of his second place, and qualify for the World Final.

The race win and overall victory went to Miyazono, with Kokubun third on the road and second overall. Yamanaka’s battling second place saw him leap into third. Despite finishing fourth and fifth, Yoshida and Kawakami couldn’t overhaul Latkovski, who placed sixth in the final race and, tied on points with Yamanaka, fourth overall.

The full list of ASOC qualifiers for December’s final is as follows:

All that remains now is the World Final itself. The online races for that are taking place right now, but we won’t get to find out the results until the broadcast. PD hasn’t yet revealed when that will take place, and we’ll bring you that news as soon as we have it.