If there is anything that we’ve learned in the past 100 years or so, it’s that cars play a large role in creating a priceless bond between a father and son, a couple of brothers or a group of friends. It could be something as simple as a clapped out Mustang or something as wild as a Bonneville car, but the shared interest among family members is what keeps this car lifestyle going for generations. One of the most solid representations of this philosophy is Ray Portman and his 1957 Chevrolet Del Ray drag car. Sure, it’s one of many in a resurgence of drag car survivors, but it offered an excellent benefit to the Portman family, and it certainly has a story worth telling.

Ray is a long time resident of Louisville, Kentucky and he has owned the car for more than 40 years. It was originally based out of the Columbus, Ohio area and raced at National Trail Raceway in the late 1960’s and early 1970’s. The car ran in the Super Stock ranks, and it came up for sale when it became outdated and uncompetitive. Ray’s best friend, Bobby Jones worked at National Trail and took notice of the car, which was Sierra Gold at the time. Bobby jumped at the chance to buy the car that he had admired for years, and of course, made a few changes to make it his own. When Bobby moved back to Louisville, he and Ray became partners on the car. They ran at tracks like Ohio Valley, Beech Bend Raceway Park, US60 and other tracks in the area. 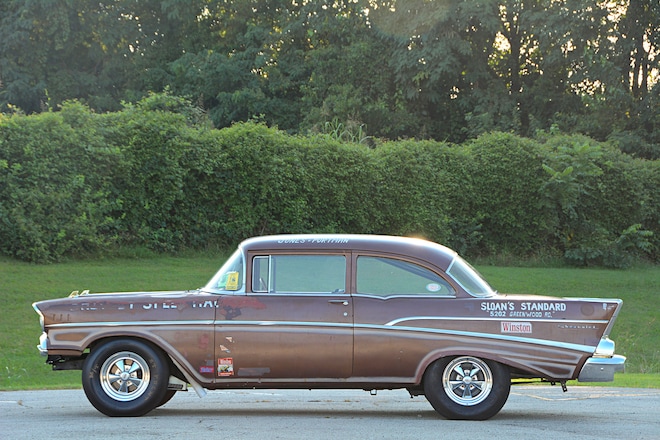 During those years, it wasn’t a high-buck operation, but it was a lot of fun for the two friends, who grew even closer because of the drag racing fever. Unfortunately, Bobby passed away unexpectedly, and Ray became sole owner of the car. He continued to successfully bracket race the car, but hung up his helmet at the end of the 1984 drag racing season. As local tracks began to suffer and eventually close, Ray’s interests began to transition into street rods and customs. At this time, Ray and Gayle’s sons, Mark (better known as Meatball) and Steve (better known as Weasel) were already crazy about cars, but this old Chevrolet is partially responsible for their addiction to hot rods.

Meatball and Weasel spent their teenage years seeing this car on the drag strip, and then watched it get pushed into the back of the garage. They saw it on a regular basis, and shared stories about it with their friends. Luckily, it stayed inside during those dormant years, but the trio of car guys always had ideas for it, while countless other projects seemed to take priority. During the height of the pro street era, it was nearly placed on the chopping block for a narrowed rear end and fat tires, but it survived through the temptation, despite getting some of its original lettering sanded off in the process. 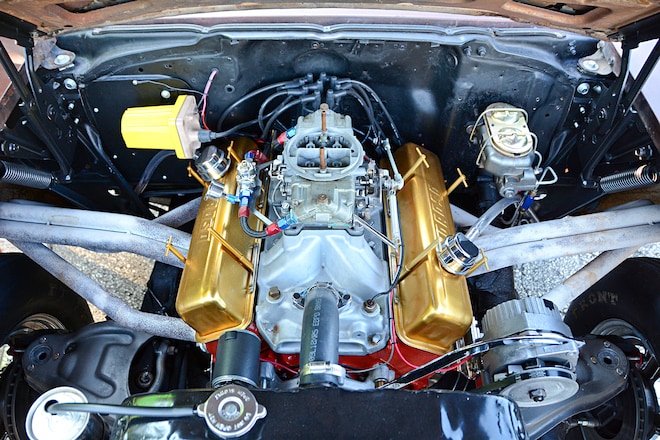 Fast forward to 2014, Ray and the boys had always talked about resurrecting the old car, but it was a push from local car guy and friend, Jeremy Thompson that sent them over the edge. Jeremy pitched in to get the car going again, and it turned into a big group effort with car guys from the area turning wrenches. The end result is a car that beats the ground with authority and still sports a crazy steep rear end gear, just in case some action comes its way. Of course, Meatball and Weasel played a part in the car’s resurrection, which was part preservation and part restoration.

The car is still working with most of the same components it had in the 1970’s and 1980’s, but it was back-dated just a little to have the right old school look. The two-inch ball joint spacers, Moroso trick springs and Moroso 90/10 shocks that Ray and Bobby installed are still in place. Ray updated the braking system to a dual reservoir master cylinder and disc brakes up front, but stayed with vintage style wheels and bias ply race tires. The stock rear end housing is in place, but it’s packing a set of 6.17:1 gears, as it was set up for eighth-mile racing. The original leaf springs were re-arched and Ray added a set of homemade slapper bars back in the day. 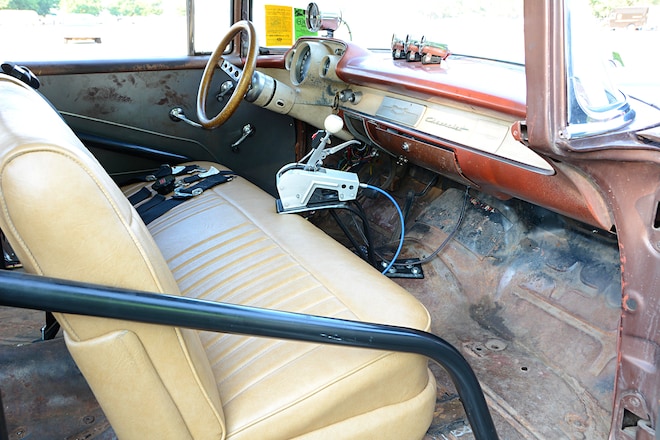 Many components in the engine are the same as the original setup. Shively Speed Machine was responsible for the engine build back in the day, and they had a great representation on the car, with large lettering on the doors and front fenders. The engine is a 327ci small block that was bored 0.030-inch, and assembled with a forged steel crankshaft, pink connecting rods, and Arias dome pistons. In combination with the 461 “double hump” cylinder heads, the engine has an 11.0:1 compression ratio, and Bobby Jones’ port work from more than 40 years ago still works well in the modern age. The stout small block runs a Cam Dynamics mechanical camshaft, with 0.595-inch lift and 305 degrees of duration. Up top are a few updates, with an Edelbrock Victor Jr. intake manifold, a 650-cfm Holley carburetor, and an MSD distributor. Wayne Bilbrey built a Powerglide transmission to handle some serious abuse, and Ray plans to pour the coals to it.

Aesthetically, the car hasn’t changed a lot in the last 40 years. Ray and Bobby did the bodywork and paint job in the 1970’s, and the Claret Brown lacquer paint, with tan fogged panels is still intact after all this time. Most of the hand-lettering and decals survived and add to the car’s character. Inside, the car has a few updates, including a Hurst Quarter Stick shifter, five-point harnesses and a six-point roll bar, but you’ll find a lot of vintage equipment in plain sight as well.

When the car reached completion, the Portman boys were itching to take it to the drag strip to let dear old dad take it down the eighth mile for the first time since 1984. The car ran a 7.35 at 95 miles per hour, and it was turning some serious rpm’s at the big end. Since then, Ray has been driving the car to local events, like the NSRA Street Rod Nationals in Louisville. He also makes the trip to Bowling Green, Kentucky for the Holley national Hot Rod Reunion and the Danchuk Tri-Five Nationals.

Ray is fortunate to have experienced many years of car-related fun with his sons, but heartbreak struck in March 2017, as he lost Steve (Weasel) to cancer. The emptiness left behind after such a tragic loss is hard for any father, brother or child to imagine, but the Portmans continue their family tradition in honor of Weasel. Only two years later, Meatball was victim to an aggressive cancer that ended his life in April 2019. Meatball was well known in the car community—he was a friend to many drag racers, hot rodders and truck enthusiasts across the country, and when he passed away, the outpouring of love was astonishing. Meatball had the ability to turn a passing conversation into a friendship, and then nurture that friendship into a relationship that felt like family. He was a brother to many and his passing left a void in his giant network of friends.

Despite the loss of his two sons, Ray Portman plans to continue the family tradition of drag racing, car shows and hanging out with the multitude of friends that his family has acquired over the years. While this 1957 Chevrolet drag car may not be the only reason that the Portman family bond is so strong, it has certainly offered a lot of good times and will continue to serve as a rolling memorial for Weasel and Meatball for years to come. 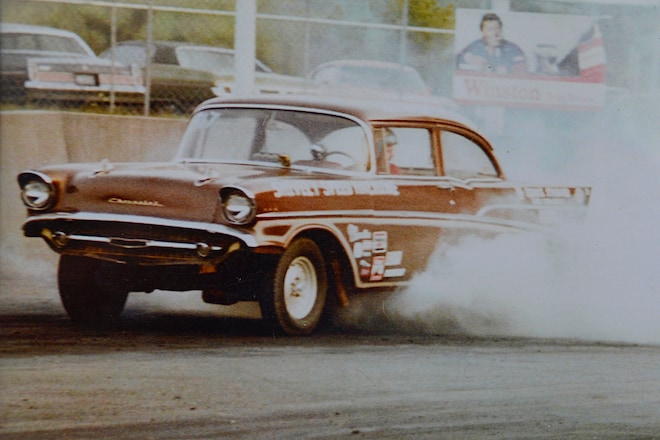