The evening of Friday, June 28, roughly 1,000 people—some from as far away as Georgia, California, and even Australia—turned up in Harvard Square in Cambridge, Massachusetts, for the unveiling of a plaque honoring the late Tom Magliozzi, perhaps better known as Click Tappet of public radio’s long-running Car Talk.

Also featuring Tom’s brother Ray (Clack), Car Talk‘s nominal brief was to provide over-the-phone diagnostics and decent car-repair advice, and so it did. But the show connected more broadly, becoming public radio’s most popular and most profitable offering, because it ranged further afield. Basically, it went to anywhere Tommy and his brother Ray felt like going, with cars serving as a stepping-off point. Taking maximum advantage of the call-in format, the Tappet Brothers dealt in family and human relations, mathematics, puzzles, and philosophy, with equal parts sarcasm and joy, their trademark cackling leading the way. 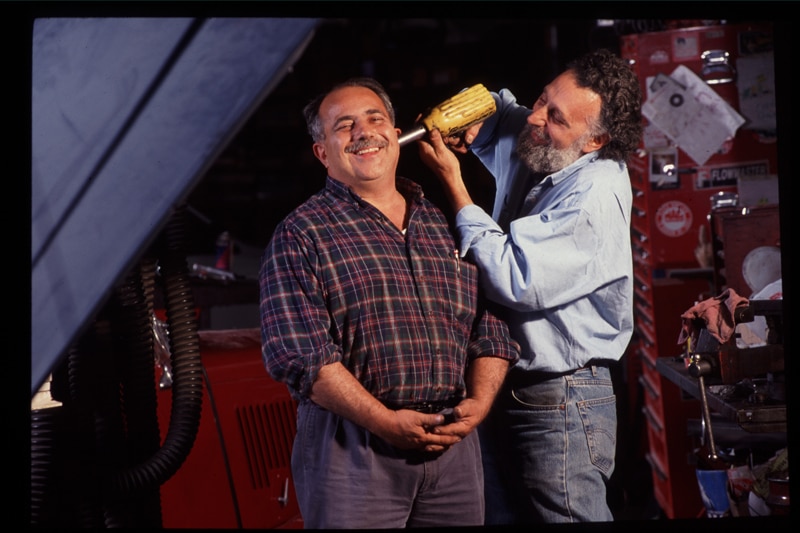 Behind the regular “Giuseppe from working-class East Cambridge” diction, there was insight and erudition that belied the Magliozzis’ street-corner affect. MIT-trained both, Tom was an engineer and college professor before he left to set up Hacker’s Haven, a garage where customers would pay a low hourly fee and be given the lifts and tools needed to fix their own car, with the brothers on hand to give advice.

From this sinkhole grew their more traditional Good News Garage, which performed work for customers at regular rates, and then, accidentally, a radio show on Boston’s WBUR. Launched in 1977, it was picked up by National Public Radio 10 years later.

A bona fide hit, new episodes were recorded until 2012, when Tom Magliozzi’s health began to fail. The show continued airing in reruns, however, even after his death in 2014, with encore broadcasts on occasion garnering higher ratings than they got as new programming. Though references to 1982 Honda Civics and the talismanic significance of Dodge Darts grow more obscure every day, the show continues to air on over 100 stations nationally. It’s also available as a free podcast.

So it was on a steamy summer evening in Cambridge, far-flung fans, dedicated local celebrants, and random passersby, as well as former staffers and the extended Magliozzi clan, congregated. 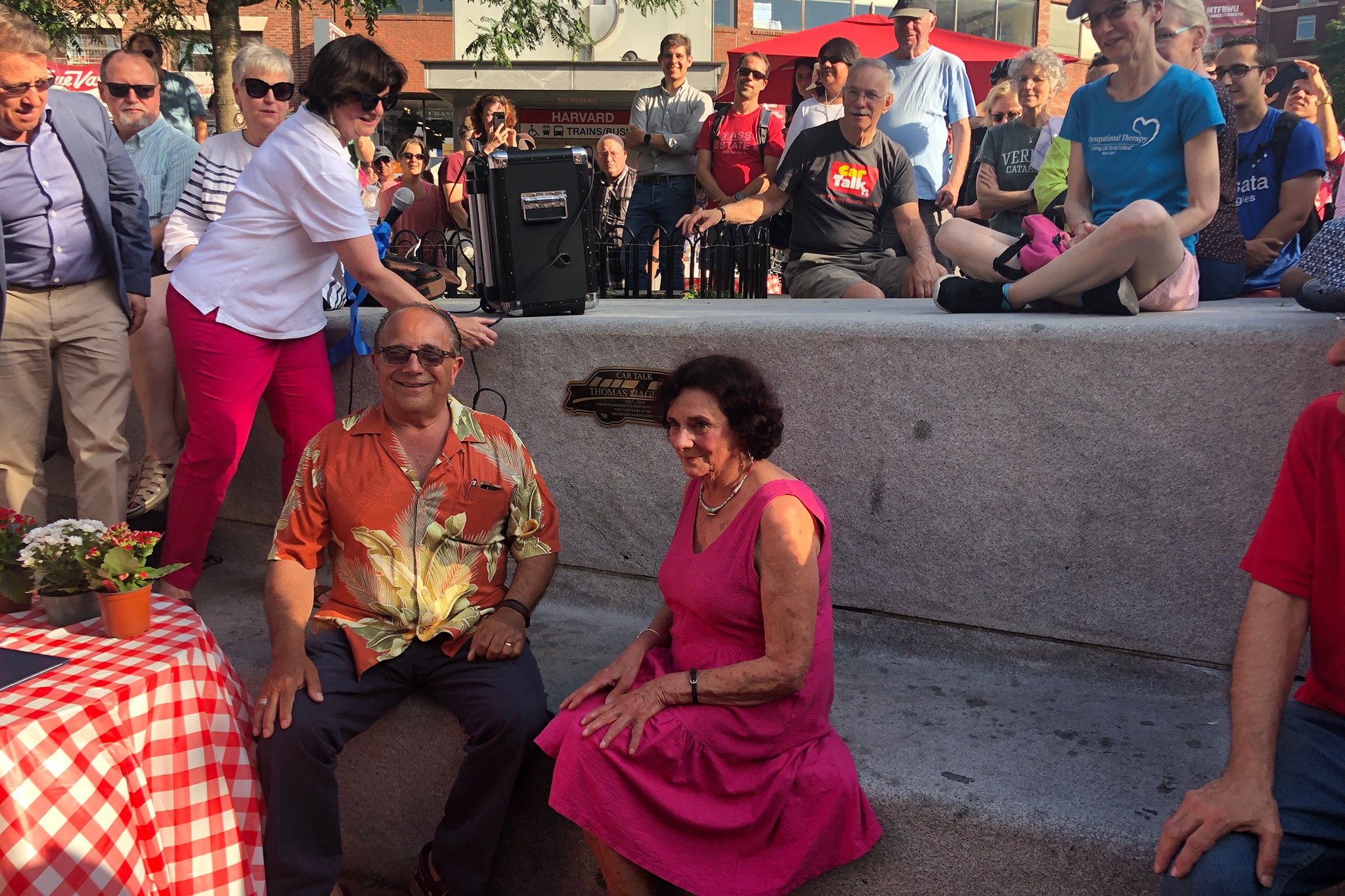 For decades, the program promoted Harvard Square far and wide and the Square was prepared to return the favor. The brothers referred regularly on air to a mock white-shoe law firm called Dewey, Cheetham & Howe. Actually the name of their production company, the pseudo blue-blood name was painted on the window of their Cambridge office in the Abbot Building, facing Harvard Square. Coincident with the celebration, the building’s re-developers pledged to keep the window sign there in perpetuity. Meanwhile, a memorial bronze plaque was placed in the square, across from a coffee shop the brothers frequented daily, honoring the elder Tappet brother and featuring an engraved 1956 Chevy Nomad wagon Tommy had once owned and always remembered fondly.

A beer garden, tacos, and a band were there for fun, and a real ’56 Nomad—red and white like the one Tommy owned—was on hand for photo ops. (That’s it up top, with its owner and Ray Magliozzi.) The mayor couldn’t make it, but the deputy mayor could. The Harvard Square Business Association’s Denise Jillson shared a few words.

Then, Doug Berman, the show’s longtime producer and one of its creators, rose to introduce Ray Magliozzi. Berman spoke movingly of how the Tom you heard on the radio was the Tom you’d talk to if you met him on the street: “One of the fears of people is when there’s a celebrity or known media person, you’re concerned that you might be disappointed if you met them in real life, that they wouldn’t be what they seem to be. The truth is Tom was everything he seemed to be, and no one was ever disappointed to meet him.” After a pause, he added, “I want to say the same thing about Ray.”

To which Ray replied, with his signature laugh, “You can’t, though, you really can’t.”

Berman agreed. “He’s no better than what he seems on the show,” he said, turning over the microphone to Ray, whose complete remarks follow.

“You never know how many friends you have until you throw a party. Everybody shows up. I was eager to get to the beer and the meatballs—I mean, who would not want to get to the beer and the meatballs, right?—but I will share a little bit about my brother that maybe you don’t know, you didn’t know, but you’re going to find out. You know, Tom was 12 years my senior, and he worked very hard. Well, he said he was an engineer and a long-range economic forecaster for some company which we never, never saw. I don’t know if it exists. I don’t know what he did. But he labored extremely hard. Are you ready for this? He got up every morning, five days a week, put on a jacket and tie, and went to work for 10 years in a row. Can you imagine the indignity of that?” 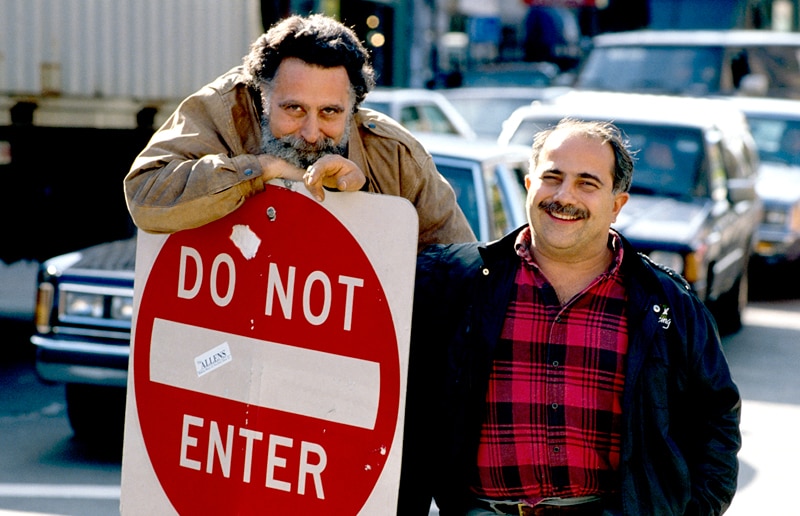 “He couldn’t take it anymore, and he decided to quit. He decided to quit on this very spot. Fifty years ago when he quit that job, he was hatching a plan for the rest of his life, and that plan centered around his not having to work for a living. And he didn’t.

“But he needed an accomplice, he needed somebody else that he could partner up with. I don’t have any hard evidence, so I’ll go back. In 1972, I was married, I was living in Vermont, I was warping—I mean ‘educating’—young minds. I get a call from our mother, and she says, ‘Your brother has quit his job. He’s becoming a vagrant. He’s in Harvard Square every day, and I’m afraid he’s going to just slip under. We don’t know what’s going to happen to him. Your father and I are very worried. You have to come home and save him.’ I said, ‘Oh, no.’ I was having a nice life up there. I didn’t want to come home.

“But he then follows up and calls me. He says, ‘I had this great idea. We’re going to start a do-it-yourself auto-repair shop. We’re going to lure in customers with the promise of $2.50 an hour and tools and our expertise that they can use to fix their own cars, and the only problem we’re going to have is how to get the wheelbarrows full of money out the door.’ I mean, who could resist that, right? How could you say no to that?

“So I left bucolic and beautiful Vermont, and I come to Cambridge. My wife and I crashed in his apartment, that’s the least he could do for us. We opened Hacker’s Haven, which was this do-it-yourself repair shop. Not only did we not make money, we didn’t even have money to buy a wheelbarrow, let alone money to put in the wheelbarrow. But then by some luck, Car Talk comes along. It fit perfectly into Tommy’s scheme, because he had to work not one day a week but one hour a week! Are you kidding? He couldn’t have planned that. When it happened, he knew enough to seize on it. 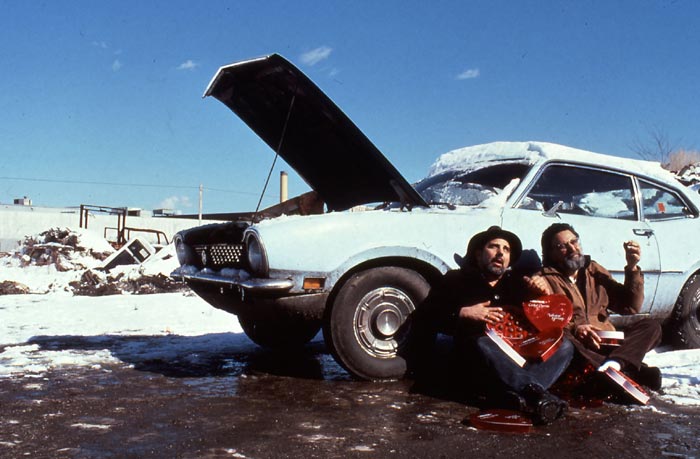 “I’ll tell you one quick little story, and then we’ll go to the spaghetti and meatballs. Tom decided at one point he was going to get a PhD. I mean, what could be better than being a college professor if you really want to goof off, right? So he gets a job at Boston University, and they’re paying him well.

“We’re visiting the folks one day at their house, and Tommy and Dad and I are sitting in the living room. Tom says, ‘I think I’m going to quit my job at BU’ My father says, ‘Well, what’s the matter? Are they not paying you enough?’ Tom says, ‘Oh, no, they’re paying me plenty, but they’re working me to death. You know, it’s the meetings and the classes and the preparation. I just have to quit.’ My father said, ‘Well, how much are they paying you a year?’ Tom said, ‘I don’t know. A hundred thousand bucks a year.’

“Dad never made more than 20 grand a year. So the idea that his son would quit a job paying five times that amount was preposterous. He says to Tom, ‘Lookit. Why don’t you go to the head of the department and ask if they can reduce your workload from five days a week down to four?’ Tom looks at him and says, ‘But I’m only working two now.’

“So, that pretty much says everything about Tom. But I’ll tell you in closing, Tom and I had more fun than any two people deserve to have in their lives. We sat out here, we drank coffee, we laughed at everything, and we had as much fun just hanging around with each other as we did on the show.

“Thanks to all of you for coming today. It’s a great tribute to my brother. Thank you.”