After the ID.3 hatchback and the ID.4 through ID.6 SUVs, Volkswagen diversified its lineup of dedicated electric vehicles with the much-hyped ID. Buzz van. Knowing that variety is the spice of life, the peeps from Wolfsburg are working on a sedan. It was originally teased in March 2018 at the Geneva Auto Show by the ID Vizzion concept before an equivalent wagon dubbed ID. Space Vizzion was presented in November 2019 at the Los Angeles Auto Show.

Since then, we’ve seen our fair share of spy shots depicting the midsize EV undergoing testing on public roads with clever camouflage. Fast forward to today, VW CEO Herbert Diess briefly spoke about the new MEB-based vehicle. During the Annual Media Conference 2022, the head honcho confirmed the Aero B will go on sale in 2023. 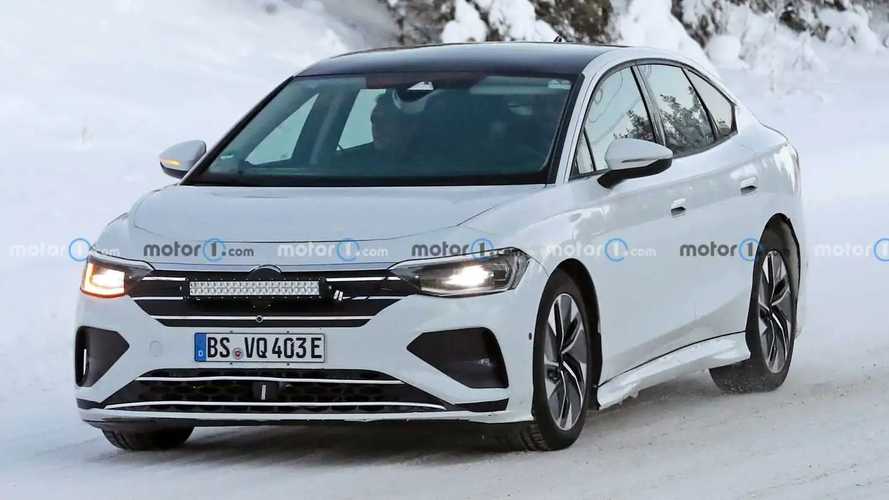 It’s unclear whether Aero B will be its final name or it’s going to be called ID. Aero. We do know Herbert Diess referred to it as the electric alternative for the Passat. It will follow the ID.3 / Golf, ID.4 / Tiguan, and the ID. Buzz / T7 pairs. While speaking about the upcoming zero-emissions model, a teeny-tiny teaser image was shown in the background.

We’ve blown it up here, and although we’ll admit the quality is less than ideal, it is an official teaser of the ID. Aero. The EV’s arrival next year won’t spell the end for the Passat in Europe since the important nameplate will soldier on. The next-gen model with gasoline and diesel engines is going to be produced in Bratislava, Slovakia alongside its sister model, the Skoda Superb. It is believed the Passat will be sold strictly as a wagon whereas the Superb has been confirmed to continue in both liftback and estate body styles.

Speaking of a liftback, the Aero B could also have a five-door layout since the prototypes had a short rear section in the same vein as the Arteon. That would make the EV more practical even before a potential wagon arrives in the coming years to echo the ID. Space Vizzion. Come 2026, the Trinity sedan will serve as the VW core brand’s flagship model and the first car to ride on the SSP architecture.

In the long run, the Scalable Systems Platform will go on to underpin all VW Group cars in the electric era.