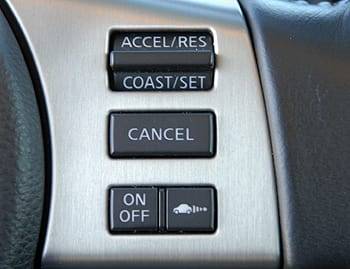 Like regular cruise control systems that have been around for decades, adaptive cruise control keeps a vehicle cruising at a set speed selected by the driver. The system also maintains a set distance from the car ahead and can slow or, in some models, stop a vehicle.

Adaptive cruise control first appeared in the U.S. in the 1999 Mercedes-Benz S-Class and now is widely available on lower-priced vehicles as well as luxury models.

Related: Which Cars Have Self-Driving Features for 2021?

Carmakers identify their systems with different names such as Distronic, Dynamic Cruise Control, Smart Cruise Control and Intelligent Cruise Control, but all of the systems use radar and cameras to monitor the road ahead. With ACC, the driver can select a cruising speed and a distance to be maintained from a vehicle ahead in the same lane, usually with a choice of short, medium or long intervals.

If the road ahead is clear, the vehicle will cruise at the selected speed, but if a vehicle comes within the set range, ACC will reduce engine power and, in some cases, apply the brakes to maintain the set distance. ACC will accelerate back to the set speed once the vehicle ahead speeds up or moves out of the way.

More advanced ACC systems offered by some manufacturers include a stop-and-go feature that can bring the vehicle to a stop without canceling the cruise control. Some will then accelerate automatically if traffic ahead starts moving in less than three seconds, though that can vary by automaker. If the vehicle remains stopped for more than three seconds, the driver typically has to tap the accelerator or press the cruise control resume switch to get going.

Other ACC systems will cancel the settings if the vehicle drops below a certain speed, and the driver will have to manually accelerate and reset the ACC.

The speed at which ACC can be engaged also varies by manufacturer, with some allowing it to operate at less than 15 mph and others requiring 25 mph or faster. (Information on how a specific system operates can be found in a vehicle’s owner’s manual.)

Like regular cruise control, ACC can typically be canceled by tapping the brake pedal or the cancel switch on the steering-wheel controls. The driver also can operate in regular cruise without using the distance setting.

When paired with lane keep assist, which keeps the vehicle centered in the lanes, a vehicle with ACC is in Level 2 of the autonomous driving protocols because the vehicle can control some acceleration, braking and steering functions.

The Insurance Institute for Highway Safety and others, including vehicle manufacturers, warn that ACC has limitations and that drivers should always keep their hands on the steering wheel and eyes on the road at all times when using ACC.

Among the limitations are reduced capability in rain and snow or if the cameras or sensors are obscured. Also, the sensors don’t recognize stop signs or traffic signals; they may not be able to detect motorcycles, bicycles, animals or stopped vehicles; and they are less capable on winding roads.

Researchers have found that using ACC and lane keep assist can lull drivers into a false sense of security and reduce attentiveness, which can lead to accidents. However, an IIHS study of 2013-2017 BMW models found that vehicles equipped with ACC and other so-called advanced driver-assistance systems had significantly fewer insurance claims for property damage and injuries. Collision claims were lower by 6%, property damage claims by 27% and bodily injury claims by 37%. The study did not say how much of the reductions were due to ACC, however.