Monterey car week auctions saw plenty of six- and seven-figure bids this year, despite the pandemic, with one of the most talked-about sales of the weekend being the record price paid for a 1995 McLaren F1 at Gooding & Co.’s Pebble Beach auction. The 1990s legend had been on a upward trajectory for some time, but the example offered in Monterey this week was special even among the already-valuable examples of the F1, only 64 of which were built as road cars, selling for $20,465,000.

Finished in a Creighton Brown color—the only F1 to receive this hue—over light tan and Brazilian Brown upholstery, this 1995 F1 was originally supplied to Japan and at the time of the Pebble Beach auction displayed fewer than 390 kilometers on the odometer, or about 240 miles. Chassis 029, the 25th example built at McLaren’s facility at Woking, was completed on December 23, 1994, being the last car finished during the year. The F1 was sold new to a Japanese collector, and stayed in the country for the next 17 years in a static display, and is believed to have accumulated most of its mileage during a promotional filming session near Tsukuba, Japan, while also receiving occasional exercise miles over the years. Chassis 029 also received preventative maintenance in 1998 in Japan, and also annual services from 2003 to 2006, with the last official service dated 2008. In 2010, the car’s odometer read 297 kilometers, Gooding & Co. notes.

“The F1 remained in the hands of its original owner until 2012, when it was sold via well-known Japanese exotic car dealer Art Sports, to Shinji Takei of Tokyo. Photos taken at the time of his acquisition show the F1 in pristine original condition, complete with its factory-delivered accessories,” the auction house adds.

The next year the car changed hands for the first time, with Mr. Takei selling it to an American collector, with the car entering the country displaying 316 kilometers. The F1 had to be imported under the Show and Display rules, and was federalized by JK Technologies of Baltimore. The car has covered only minimal miles since being federalized, with the consigning owner reportedly idling it once a month up to operating temperature, and changing the fluids on a regular basis. 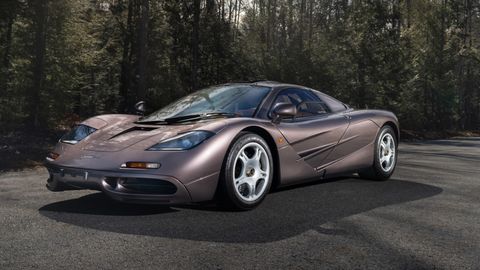 “A credit to the foresight of its three private owners, 029 is presented today in exceptional original condition,” the auction house notes. “In all respects, this is a benchmark, time capsule example of the definitive modern-day supercar. Not only does this McLaren retain its factory-applied paint and interior finishes, its various identification plates and labels also remain intact. Even its Goodyear Eagle tires, specially designed for the F1, are the original ones supplied with the car when new, as confirmed by their 1994 date codes. Similarly, the F1 still retains its January 1995-dated Premier fuel cell manufacturer’s label and the original McLaren Track Record plaque, with the last line acknowledging the team’s 104 Grand Prix wins in 1993.”

The auction house estimated prior to the auction itself that the McLaren F1 would bring somewhere north of $15 million, and given some of the prices paid for other F1s this actually seemed like a very conservative estimate, especially given the low kilometrage of the car. In 2017 Bonhams sold another federalized McLaren F1 at the Quail Lodge sale for $15,620,000—a one-owner example that had been the first federalized car imported into the U.S. Two years later, in 2019, another F1 ended up changing hands at RM Sotheby’s Monterey sale for $19,805,000, a LM-spec example that actually landed a bit south of the estimate range predicted by the auction house, which spanned from $21 million to $23 million. In that context, this weekend’s hammer price was perhaps overdue, especially given the original, gently-used condition (if not mechanical details) of the car.

Also, compare this result to values half a decade ago, when an F1 GTR Longtail that sold for just $5.28 million at Gooding & Co.’s own Monterey sale in 2014. Values were merely in the seven-figure range six or seven years ago.

Curiously enough, since the F1 is now within the 25-year window, the whole song and dance with the federalization process is now moot, and we’ll expect to see at least one more example of the F1 during next year’s Monterey week auctions, now that this venue has proven itself capable of generating even record sums for the F1, in addition to somehow outperforming 2019 auction totals.

That’s right—this year’s Monterey week sales have eclipsed the pre-pandemic 2019 totals by 37%—adding up to $343 million though Saturday, according to Hagerty. A much higher sell-through rate of 80% is credited for helping bring about this result, Hagerty notes, compared to just 59% in 2019.

So if there is economic uncertainty in the world related to the pandemic, it clearly doesn’t apply to the bidding at Monterey week auctions.

Will McLaren F1 values continue to grow over the next five years, or have their values reached a plateau? Let us know in the comments below.