There are few limousines from the past 50 years with any significant investment potential, or are treated as blue chip investments by the classic car market, but the Mercedes-Benz 600 Pullman is certainly one of them. Often hailed as the car of royalty, celebrities and more than a few general secretaries and strongmen, the 600 Pullman has avoided the fate of some of its contemporaries and remains one of the few revered limousines of the post-war era.

In a few days one of these rare Pullman models will roll across the auction block when Historics Auctioneers offers a 1971 four-door example claimed to have been restored to a very high standard in 2016, and now shows just 29,139 miles.

The 600 Pullman itself is based on the 600 sedan, which debuted in 1963, succeeding the “Adenauer” model as the top Mercedes-Benz sedan. Codenamed W100, the 600 sedan featured a generous interior, impeccable craftsmanship and a 6.3-liter V8 engine underhood with Bosch mechanical fuel injection. The 600 sedan debuted at the 1963 Frankfurt Motor Show, wowing crowds with its air suspension, plenty of powered items for the interior, two air conditioning systems, interior materials, curb weight and price. 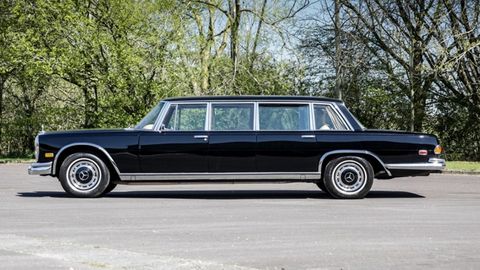 As lavish as the 600 sedan was, the only version that topped it soon thereafter was the Pullman limousine, measuring more than 20 feet in length and offering even more luxury inside. Several different versions of the Pullman were offered, some with three forward-facing rows with six doors, some with a middle row of fold-away seats and four doors such as this one, as well as different types of Landaulet roofs. Just under 500 examples of the Pullman limousine were made, and an even smaller number of Landaulets numbering 57 by most accounts. The 600 sedan wasn’t a mass-market item either, with less than 2,200 examples leaving the factory over a relatively long period.

The car that Historics will offer later this month is a 1971 four-door limousine with a rear-facing middle row of conference-style fold-away seats, preferred by heads of state and other dignitaries. The auction house reports that this is one of just 304 examples built to this configuration (as opposed to a six-door or other layout), and featured a powered glass partition. This car is said to have received an extensive restoration, including a reworking of the interior in the original OEM style with tan leather and a refinishing of all the wood elements and chrome pieces. The car has also been resprayed in the (obligatory) Raven Black. 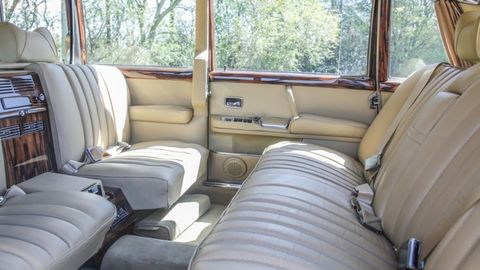 The auction house is silent about the ownership history of this particular example, which is a bit of a surprise as it’s bound to have been a famous (or infamous) individual, and such details are often part of the appeal of these cars.

When it comes to any version of the Mercedes 600, it’s always best to buy a car that has already been restored, as it’s possible to spend this entire estimated sum just to restore a neglected example. The Pullman model, in particular, has acres of interior materials to attend to during a factory-correct restoration, and plenty of tricky systems under the skin. Beyond that, there are also countless interior and exterior pieces that you’d hope you won’t have to manufacture from scratch, and there are simply hundreds of small trim pieces that you can just see with your eyes, and hundreds more under the skin that you can’t see. That’s why it’s best to start with as complete an example as possible, if at all, because it’s not unusual to spend a mid-six figure sum to end up with a car that may or may not return that exact amount at auction. 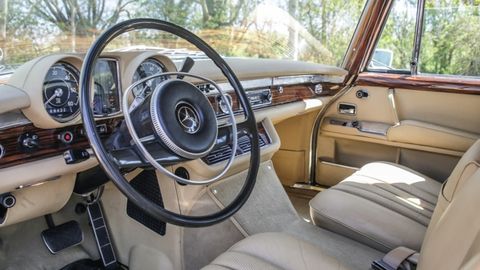 The estimate here represents just about the top of the market at the moment, which is a lot more than it was a decade ago when relatively average example would trade under the $100,000 mark. The growth in values of the past decade has made six-figure restorations more palatable to owners on the fence about restoring one, which is why this particular example was restored in 2016. The undisclosed ownership history of this example is a little puzzling, as there are really no such things as “no-story” cars when it comes to the Pullman, but hopefully there is ample documentation from its early years.

We’ll have to wait and see if this example will top the $400,000 mark later this week, but this is strange time in the market in many ways, and examples of the Pullman do not come up for auction all that often. So every result at a major auction tends to be unique.

Visit the auction website to view the full list of lots from the upcoming sale, as well as a detailed auction schedule.