In the 1990s, the U.S. may have gotten Volvo’s executive cars in the form of the 960 and S90, but it didn’t get all of them. In addition to the standard-wheelbase models, Volvo also produced a small number of sedans with a stretched wheelbase, in addition to the three-row Pullman limousines. Most of the stretched sedans ended up in Europe or with Sweden’s diplomatic corps in overseas embassies, and a quarter of a century later very few of them survive.

But in a few days a Volvo S90 Royal—a factory-stretched sedan that was exported to Japan when it was new—will roll across the auction block in the U.K. when Historics Auctioneers offers it at its Ascot Racecourse auction.

Despite the new name, the S90 and V90, having originated from the 700 series, were effectively the oldest models in the lineup by the second half of the 1990s, right before Peter Horbury’s reVolvolution range debuted with the S80 sedan in 1999. Nevertheless, the S90 still had some shelf life left in it by the second half of the decade, as its competitors like the Mercedes-Benz S-Class and the Lexus LS400 were about the same age.

In addition to stretching the S90 at the B pillar by six inches, Volvo also gave the sedan a center console for the benefit of rear passengers, since backseat comfort was the main point of this car. Just 1,100 examples of the S90 Royal are said to have been built, most of them destined for diplomatic use such as this example. 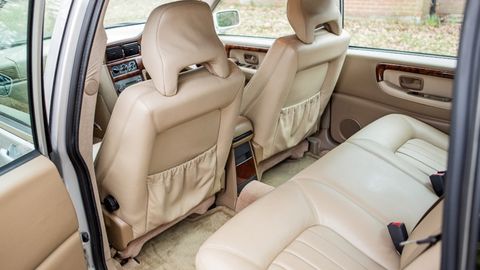 This right-hand drive 1999 S90 Royal has covered just 51,500 miles in its 22 years, and had spent some time in Japan. Powered by a 2.9-liter six-cylinder engine coupled with an automatic gearbox, these S90 sedans were built for comfort and style, if not for high-speed performance or tactical driving. This particular car was brought to the U.K. from Japan in 2020, where it was believed to have been a chauffeur-driven diplomatic car.

The right-hand drive layout of this example likely assures that it will stay in the U.K., limiting its appeal a bit, but S90 still offers quite a bit of luxury for what is likely to be a very modest sum. These were effectively hand-built to order when they were new, and had very few natural competitors, having been used by Swedish embassies overseas. Not that many have survived, and the low mileage on this example is mostly thanks to the fact that the car has been used very sparingly in Japan. 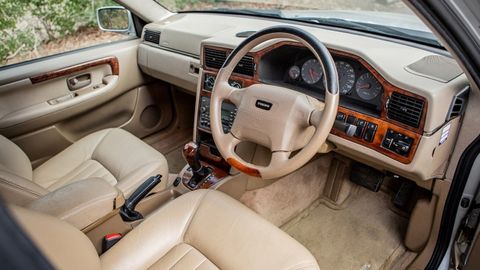 This example will be difficult to replicate, we expect, but could still turn out to be quite a bargain for someone.

Visit the auction site to view the full list of lots from the upcoming Ascot Racecourse sale.