Mercedes’ own electric luxury sedan will be among the first models of the automaker’s massive wave of electric vehicles, eclipsing Tesla’s own lineup in variety by 2022. The German automaker has a model in the works for just about every major segment with a total of four SUVs, one is already on sale in Europe, and two more sedans in the works. All will go on sale in the next 24 months.

Mercedes clearly expects demand for electric SUVs to be a higher priority based on the planned launch of three additional models in a very short span of time. But a large executive sedan underpinned by a platform called EVA will still be the range flagship when it comes to interior tech, range and luxury features. The automaker is expected to reveal the EQS sedan in production form next year before the start in the U.S. the same year, making it the first of the EQ models to land stateside.

What can we expect from the EQS?

For starters, the sedan produced at Factory 56 in Sindelfingen alongside the S-Class is expected to offer a 435-mile range in the somewhat optimistic WLTP cycle, a figure which still gives it plenty of expected range once the EPA figures are announced shortly before its commercial debut. That figure, based on the WLTP figure, should still be well above 300 miles on a single charge, and quite possibly above 350 miles. The battery pack should land somewhere near the 110-kWh mark, based on the range and the car’s expected weight. Other battery variants, such as a longer-range version, could dial up the range further. 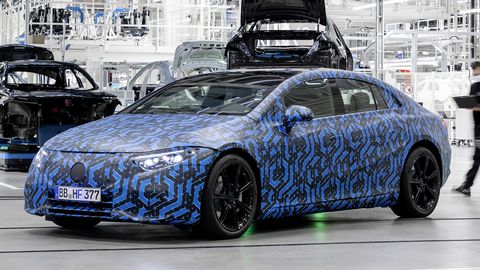 “Our EQ models will meet the highest standards and also set standards in many disciplines,” said Christoph Starzynski, Vice-President Electric Vehicle Architecture and Head of Mercedes-EQ at Mercedes-Benz, responsible for electric vehicles. “The EQS, with its more than 700 km of electric range according to the WLTP, the most intelligent MBUX in its most beautiful form and its certified air filtering system, which achieves the air quality of an operating room, shows only a few examples of the technological innovations of our electric platform.”

As for power, the Vision EQS concept shown in 2019 boasted a dual-motor all-wheel drive setup good for 469 hp and 560 lb-ft of torque. That should be easily achievable in production with electric motors. At the time Mercedes also indicated the concept sedan had a 0 to 60 launch time less than 4.5 seconds.

“In addition, the cobalt content will already be reduced to less than ten percent for future generations of battery cells, which will already be used in the EQA and EQS in 2021,” the automaker said. “In perspective, post lithium-ion technologies and new material compositions will make it possible to eliminate materials such as cobalt completely. Further optimization of recyclability and its implementation at Mercedes-Benz is also part of the holistic battery strategy.”

When it comes to design, being an EV means some significant departures from the Mercedes-Benz S-Class. So this won’t be an S-Class with a battery stuck under the floor at all. This is an entirely new design featuring relatively short overhangs, a cab-forward layout and a vast greenhouse stretching almost from the front to the rear wheelarches. This will give its nose and trunk a shorter appearance, since there won’t be an engine under the hood, and it will give the cabin an airy, roomy feel. Photos the automaker recently revealed show a fastback trunk and a rakish backlight and a modest spoiler, revealing a large rear glass hatch instead of a three-box sedan profile with a metal trunklid. (Yes, we can go ahead and thank the Tesla Model S for this design element). Long, horizontal taillights represent a nod to the AMG GT four-door, rather than the new S-Class. 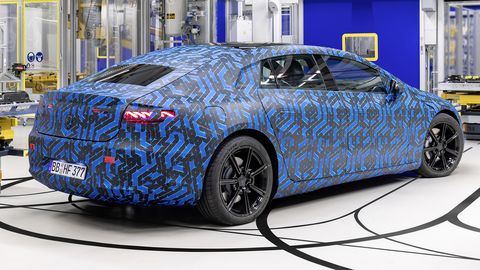 Another Tesla-influenced item the EQS features is a large infotainment touchscreen. The first details were revealed only days ago. And it will even have a name that sounds like it was thought up by Elon Musk himself: the Hyperscreen. But this isn’t a floating screen right above the center console. Rather, the optional MBUX Hyperscreen screen stretches the entire width of the dash, pretty much from door to door, and it will be a touchscreen system. Just how close it will be to the driver and front passenger remains to be seen. And in fact we’ll see it on January 7 to be precise, when the Hyperscreen is shown days prior to the Consumer Electronics Show, virtual this year. But a full-width touchscreen is what has been promised.

“A well-written code is like a work of art,” said Sajjad Khan, Member of the Board of Management of Mercedes-Benz AG. “And we will offer our best software solution to date in the new EQS. The underlying AI is revolutionary, and the learning system beyond that is more impressive with every use. With MBUX, we are not only well-positioned today, as the complete over-the-air update capability will continue to amaze in the future. This approach also opens up unbelievable creative scope, which appeal to me personally as a programmer.”

How much will the EQS cost when when it goes on sale in the U.S?

Plan for a starting price around $100,000, not too far from the starting price of the new 2021 Mercedes-Benz S-Class itself, just announced a few days ago. The EQS arrives in summer 2021 as a 2022 model, after production starts in Germany in the spring. It remains to be seen whether Mercedes will offer a single-motor version or whether we’ll see longer and shorter-range battery versions, but the stateside menu of EQS variants is not likely to be very expansive, as with the gas-engined S-Class.