We all learn from our mistakes. Sometimes we come out much better for it. Consider Volkswagen. When Volkswagen came up with a way to skirt emissions testing on its diesel cars, got caught, and had to pay more money in fines than most small and medium countries’ GDPs, the company used the scandal as an opportunity for change.

“As you’re well aware, we’ve had some rather unfortunate experiences in our not-too-distant past,” said VW’s chief operating officer Johan De Nysschen. “We’ve learned from this, and I think it has informed our psyche. We recognize that as the largest automaker in the world we have a responsibility that transcends just the need to generate sustainable returns for our shareholders.”

That responsibility extends to the whole planet, De Nysschen said.

“We have a larger duty and call and that is to deliver sustainability to the society with whom we engage, and who share this planet with us. If we don’t lead, if we don’t help shape transformation, then who should? It is that philosophy that has informed this major pivot of the group to the point where we have embraced electrification, to the extent that no other automaker has.” 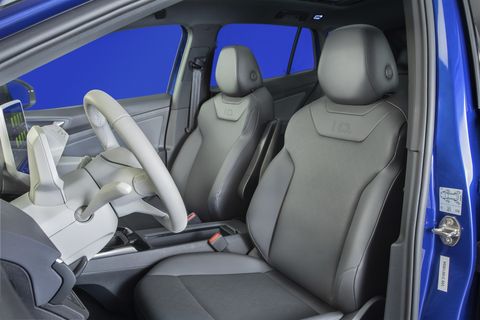 So, basically, Volkswagen plans to save the world with electric cars. And the ID.4 crossover is the first one. After getting a look at the production version of one of them, it looks like a very solid entry. It’s sized right, about on top of the biggest sellers in the compact crossover segment, where the Toyota RAV4 rules the roost.

The ID.4 rides on Volkswagen’s all-new, purpose-built electric car platform, known internally as the modular electric drive architecture, or MEB. VW likes to say it’s just like the original Beetle, with the drive unit in the back driving the rear wheels.

The big question with any electric car is range, and Volkswagen estimates that the first models of ID.4 will go 250 miles on a full charge of its 82-kWh battery. It’s made from 288 pouch cells in 12 modules lined up inside a stiff aluminum case so strong that it acts as part of the vehicle’s structure. The rest of the chassis and body of the ID.4 is made from steel. The battery pack rides under the floor of the vehicle.

The first ID.4s will come in rear-wheel drive configuration only, with the rear-mounted 201-hp, 228-lb-ft AC permanent-magnet synchronous motor mounted between the rear wheels. A 302-hp all-wheel-drive model will come later in 2021.

To power all that horsepower, Volkswagen cinched a deal with Electrify America to provide free DC fast charging to ID.4 buyers for their first three years of ownership. That sounds nice but in reality most electric car owners recharge their cars at home overnight using household AC charging at 240 volts. It’s a little slower but since you have all night it works. Still, it’s nice to know that you could travel across the country, fast-charging the whole way on Electrify America’s nationwide network for free. DC fast charging can replenish the car’s battery from five percent to 80 percent in 38 minutes, VW says.

Volkswagen says the ID.4 is “designed to be strong yet agile.” It rides on struts in front and a multilink rear with antiroll bars at both ends. “The ID.4 feels nimble, especially among other compact SUVs,” VW said. Having driven the very nimble eGolf, a Golf platform converted from internal combustion to electric drive, that claim sounds entirely believable. Looking forward to driving one soon.

Inside, the ID.4 is clean and uncluttered, with 99.9 cubic feet of total space.

“It offers a full suite of advanced technical benefits, all very intuitive and easy to use,” De Nysschen said. 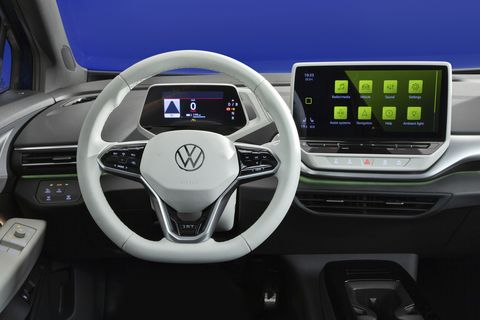 There are two screens that face the driver. One is 5.3 inches across and sits on the dash viewable through the steering wheel. That’s where all your driving info is: state of charge, speed, etc. In the center of the dash, to the right of the driver, is a raised 10-inch screen with everything from HVAC to infotainment. You can access this by Advanced Voice Control, touch user interface, or gesture control. An attempted demo of the gesture function fell a little short, but this was a very early unit so we’ll cut them some slack. There are four USB C connectors and that optional wireless phone charging system. The center console is modular, allowing you to swap around cupholders and space dividers as you wish.

A strip of lighting along the base of the windshield performs several functions, including state of charge of the battery and a turn signal function that works in conjunction with the NAV system to tell you when to turn.

Behind the second row of seats are 30.3 cubic feet of cargo space, which expands to 64 cubic feet when the rear seats are folded.

“You can carry a bicycle, coffee table, or refrigerator,” De Nysschen said.

A separate space under the rear floor lowers to increase volume when needed.

VW plans to garner almost all its sales by conquesting compact crossover competitors. Those include not just the RAV4 but almost all others in the class: Honda CR-V, Ford Escape, Mazda CX-5 and up to 45 entries in what is a huge class.

“The ID.4 meets the requirements of a very broad spectrum of consumers at different price points, different layers of content and technology,” said De Nysschen. “And it will meet and satisfy the expectations of most.”

The first available model of the ID.4 is called the 1st Edition. It will be offered in RWD only and stickers for a stiff $43,695. Since early adopters are a little crazy, they’ll gladly pay that amount.

“We have no concerns about our ability to find very enthusiastic buyers at that price point,” De Nysschen said.

VW will offer a few thousand of those to start. That goes on sale here “later this year,” according to Volkswagen. 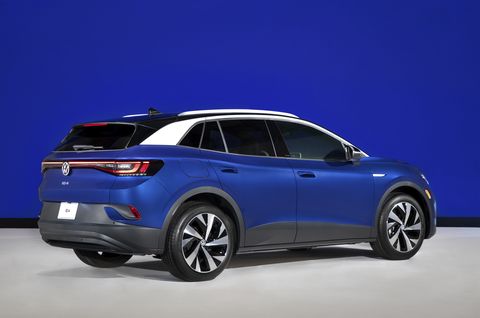 After that, in the first quarter of 2021, look for the ID.4 PRO, also in RWD, for $39,995. That will get a few extra features like unique alloy wheels, heated seats and steering wheel, wireless phone charging and some other nicities.

There will also be a lease deal available for the rear-wheel-drive ID.4 PRO:

“For highly qualified customers through Volkswagen Credit, the monthly lease payment for a 36-month lease with 10,000 miles a year is $379 per month with $3,579 due at signing, excluding tax, title, license, options and dealer fees.”

Once production of U.S. models shifts from Zwickau, Germany, to Chattanooga, Tennessee, beginning in 2022, the price of an ID.4 should drop to $35,000, VW says.

Volkswagen also reminds you that you can still get that $7,500 Federal tax credit for buying an electric car, with further credits available in some states. So be sure to figure that in, along with gas savings, when calculating your purchase price.

Should you buy one? It’s kind of an historic point, VW says.

“It’s not only an attractive car but it represents the future,” said De Nysschen. “We are finally reaching this point, and bringing the fruits of all of these labors to you. …the introduction of this new vehicle, a new model, is of historic importance. It represents a turning point for the brand. And it’s the most amazing thing that has ever happened. I know that you hear this often. And so I can fully appreciate your skepticism when you hear things like it. Nevertheless, I’m going to make the same claim to you today, because I think it’s true.”