Mercedes-Benz sees itself as a car company. Yes, they make and sell a ton of SUVs, but when you think of Mercedes, the company wants you to visualize an S-Class sedan. And starting soon, it would like you to shift that vision to a new model—the EQS.

The EQS is the cool electric sister car and eventual replacement to the traditional S-Class. It is different and the same as its gas-powered predecessor. Mercedes’ number one goal in its electrification program is retaining its solid customer base. Every electric model introduced (the EQS is the first shot, but will be followed next year by the EQB SUV and the EQE) will initially sell alongside its ICE doppelganger.

A secondary goal of the EQS is conquest sales of Tesla Model S owners. Bernie Glaser, head of product management at Mercedes-Benz USA said the company was “ready” to help Tesla owners find a new home. The Model S, which was initially introduced in 2012, just received a refresh with a new performance model as well as some interior changes, such as a switch to a yoke-style steering wheel. The exterior of the S remains virtually unchanged after nine years.

Glaser added that his expectation is that the EQS will be an immediate hit, paving the way for the parade of electric models that will follow. The backup is, as mentioned, the ICE S-Class, which will be available next to the EQS, offering what Glaser termed “the best of both worlds” to potential customers.

During a two-day drive around the San Francisco Bay area, we got to put the EQS through all the usual driving a Mercedes driver in the region might encounter—crawling through clogged city streets, tackling serpentine mountain roads, cruising along scenic coastal highways, and even blasting along the Interstate. The EQS didn’t miss a beat in either the rear-wheel-drive 450+ or the 580 4Matic all-wheel drive.

The 450+ clocked in with 329 hp and 419 lb-ft of torque, while the 580 boosted that to 560 hp with a similar bump in torque. Because it’s an electric vehicle, that torque tends to be available throughout the power band, allowing amazing and seamless acceleration, especially in the 580 model.

Handling was enhanced by a standard air suspension and Mercedes trick 10-degree rear-axle steering. Neither model ever felt like it was going anywhere but as directed by the driver. Four driving modes give the driver some control over the basic road feel while different brake regen modes moderate the amount of energy returned to the battery. That battery stored enough to give the 450+ an EPA-rated 350-mile range, while the 580 will go 340 miles. It’s capable of fast-charging at up to 200 kilowatts.

Not an Electric Clone

The looks of the EQS confirm it is not simply an electric clone of its conventional brother, but rather a subtle reshaping of the classic Mercedes look that identifies it as part of the family. The styling picks up signature looks from concept cars like 2015’s F 015, a rounded, interior-focused car that focused on the amenities of the interior.

The exterior is rather subdued for a six-figure luxury car, following a Mercedes tradition, but it does boast a dramatic 0.20 coefficient of drag. The true definition of the car is in the interior, where designers and engineers have poured their hearts and souls into creating something that defines the company vision of “progressive luxury.” Eschewing Tesla’s minimalist approach, the EQS has as its centerpiece a massive 56-inch curved dash (first shown at CES earlier this year).

While the Hyperscreen presents as a single piece of glass, the dash is divided into three independent sections, so the information potential is rather large. The most novel portion is the far-right third screen, which only appears when a passenger is present, but offers that passenger a suite of entertainment and information options—though not including Netflix videos (yet). 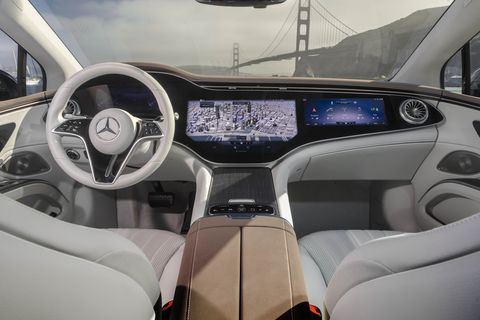 Other interior features include a floating center console made possible with the flat floor because of the absence of a driveline tunnel as well as a 64-color spectrum of ambient lighting.

That pricing may well move the needle on the EQ models as they’re introduced, lending credence to Mercedes’ goals of having 50% of global sales electrified by 2025 and by 2030 having all electric vehicles in its offerings (where market conditions allow).

A final point Mercedes makes with the EQS is its green credentials don’t begin when the door handles automatically extend out to greet you. The factory building the EQS (in Sindelfingen outside Mercedes headquarters in Stuttgart) has already reduced energy use, expanded its use of recycled components, and added solar panels to its room to supply 30% of its energy, on its way to being a CO2 neutral facility.

The company also is developing plans to recycle the batteries coming out of the EQS and other models at the end of their life. That recycling operation will take place at Mercedes’ Tuscaloosa, Alabama, manufacturing plant.

The new flagship of the Mercedes brand plans to stand proudly on these green credentials, but fully expects to sell itself as the epitome of where the company is headed. The EQS is more than just a new electrified S-Class; it is the “most significant Mercedes” and an “accelerant within the company,” as one executive put it. Some expansive drives around the San Francisco Bay area did nothing to dispel that image. The proof will come with consumer, especially existing Mercedes customers, reaction when the EQS arrives in showrooms this fall.