It’s been almost two years since Citroën debuted its Ami electric microcar, featuring doors that open in opposite directions. Meant as a small urban runabout with a 5.5-kWh battery and a range of 44 miles, the Ami is an effort to bring electric mobility to the masses, including those too young for a driver’s license, as the Ami was classified as a quadricycle in some countries. What’s more, it will be the first Citroën vehicle in about 30 years to make it stateside, with car-sharing service Free2Move scheduled to bring them to Washington, DC, and Portland, Oregon, this year for a trial run.

We certainly expected the Ami to interest car-sharing companies in Europe, but we didn’t really expect another PSA brand to offer its own version of the tiny car. But thanks to Stellantis’ deep roster of automotive brands in Europe, Opel has revealed its own restyled version, with an extra three miles of range, bringing the total up to 47 miles.

One of the main selling points in Germany will be the fact that 15-year-olds will be able to drive it on city streets, if not the autobahn. Its expected price of just under $7000 should make it popular with plenty of city dwellers as well.

Dubbed the Opel Rocks-e, this version of the Ami features some resculpted bodywork on the outside, and also weighs a few pounds less than its Citroën twin: 1038 lbs versus 1069. The weight and the aerodynamics could account for the range difference, though it’s possible the battery and motor were also simply given some different programming to tweak their performance, while the top speed remains 28 mph. 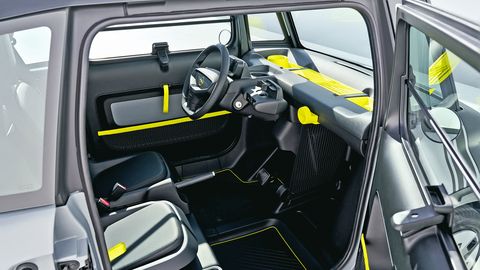 “Our new Opel Rocks-e is uncompromising in every respect. The design is bold and pure, the dimensions are extremely compact,” Stephen Normal, Opel head of sales and marketing said. “Our SUM [Sustainable Urban Mobility] drives purely on electricity and the price is unbeatable. The Rocks-e enables smart and functional electric mobility for everyone and will attract a lot of attention. Opel is simply ‘menschlich’ and approachable—the Rocks-e delivers further proof.”

While the Opel version isn’t headed stateside, it remains to be seen whether the Citroën version will be able to take off among car-sharing services on a wider scale, such as PSA’s Free2Move. Following Smart’s departure from the US and the end of Mitsubishi i-MiEV sales, perhaps there will be an unfilled niche for small, urban electric cars priced well below $20,000 that can be offered by car-sharing services, or even leased. However, car-sharing services owned by European automakers haven’t had the easiest time in the US recently, even as folks shied away from public ground transportation during the pandemic.

Does an EV with this range and price have potential for urban dwellers in the US, or is it too small and limited? Let us know in the comments below.