Dennis Palatov is exactly the kind of mad scientist you want working on building better sports cars. If, like all mad scientists, he is going to take over the Earth, the Earth will need more twisty mountain roads.

Palatov is an electrical engineer by training but has spent the last 13 years of his life making very cool, very compact race cars that have competed at Pikes Peak, Bonneville, and countless track days driven by their giddy and (understandably) very enthusiastic owners. Now he is building a new and very promising two-seat sports car called the D8. Because the D8 has the exact same 95-inch wheelbase as the original GT40, the D8 can accommodate a GT40 body, one of which in replica form he has in the shop. Like some of his earlier creations, the D8 can also come powered by a GM LT1 or LT4 V8, because just as someone is always going to want a GT40 body, someone is going to want small block. The car can also accommodate Palatov’s own-design aerodynamically efficient body powered by his own-design of modular electric battery packs.

We’ll take one of each, please. 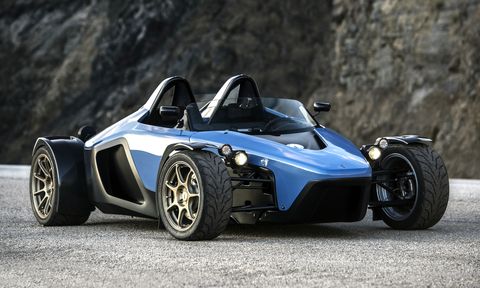 I got to drive several of Palatov’s earlier works, from the D4 to the Drakan, and man-oh-man if I had the $80,000 to $100,000 they cost I would stock a garage with them and build a track to race them on. All of them that I’ve driven provide a directness of feel through the wheel and through the seat of the pantalones, along with a perfect power balance, that nothing else in the world matches, from the Ariel Atom to the BAC Mono to the original Lotus Elise and Alfa Romeo 4C. Pick a crazy accurate sports car and the Palatov will likely out-track it.

So his next entry in the Pantheon of Palatov is this D8. So far, he has mocked up a chassis and is experimenting with different drivetrains.

“I’m pretty excited about the car, of course,” Palatov said yesterday by phone from his Portland, Oregon, shop. “It’ll be primarily electric. We’ll have gas engines, LT1 and LT4 for those who really want them, but primarily I’m designing it as an electric with Cascadia drivetrains.”

Work on the new car is going well. 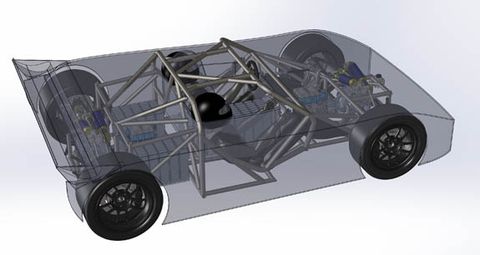 “It’s in the final design stages,” Palatov said. “I’m doing CFD (computational fluid dynamics), I’m doing the chassis design. And I’m doing the body work and the styling as well. We expect to have the first rolling, drivable chassis somewhere around the very end of the year. The bodywork will probably be ready by spring because we have to make the molds.”

The car is an evolution of the D1, D2, and D4, previous Palatov cars that have raced at all those places mentioned above. But if you take a look at the red car in the computer drawings, it looked to me like an Acura NSX. Maybe you see something else in it. 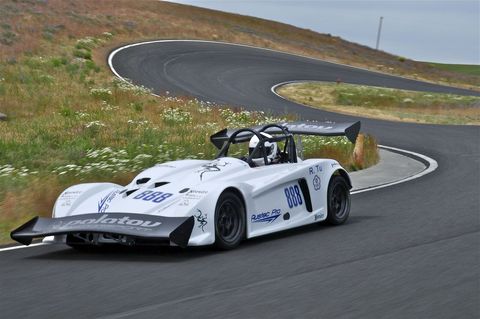 “It’s actually not obvious from the pictures, but it’s a fairly compact car. It’s actually only a 95-inch wheelbase and it’s 145 inches long, which is nine inches shorter than a Miata.”

He is completely certain about it fitting the rear-mid-mounted V8 drivetrain, likely with a Porsche G96 manual transaxle, because his earlier cars could fit that configuration. Suspension, as you can see in the drawings, is a double-wishbone pushrod setup.

Whether you can register it for the street is up to the laws in your individual state.

“It’s a little beyond the capabilities of our company to fully register it. But we’ll see. And that’s another reason for doing it as a replica, because we could potentially register it as a replica, or under (the new) low-volume (manufacturer law). Most states have ways of registering custom-built vehicles. And of course, with the electric drive train it’s automatically emissions compliant.”

The electric drivetrain. Yes, that may be the bigger news here. Palatov has big plans for an electric future.

“We’re launching another company in parallel, which is called Modular Battery Technologies. We’re looking to transform the way EV batteries are made. We’re looking to make them a commodity. And we’ve come up with some specific technologies that are patent pending right now that make it possible.” 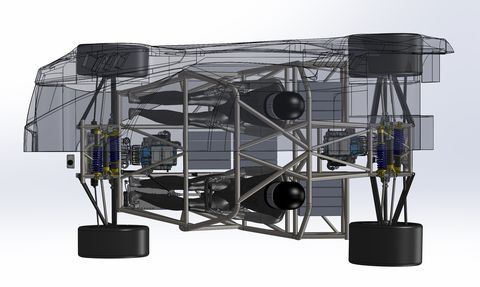 Palatov’s battery plan is to offer full-voltage modules, which is very different from how modules are done right now, he says. Now, modules are low-voltage and you stack them vertically. In his model they’re full voltage so you can put them in parallel, as many as you need.

“That lets you right-size the battery for the actual use, because a lot of people who are buying 400-mile Teslas are only actually driving 40-mile commutes. They’re hogging the resource. And they’re dragging 600 pounds of battery that they don’t need on every trip.”

Right now, EVs are only 2% of the market, but legislators and carmakers are pushing for 100% 10 or 15 years from now. That’ll be a lot of EVs and a lot of batteries. Palatov hopes to address the recycling issue, too. 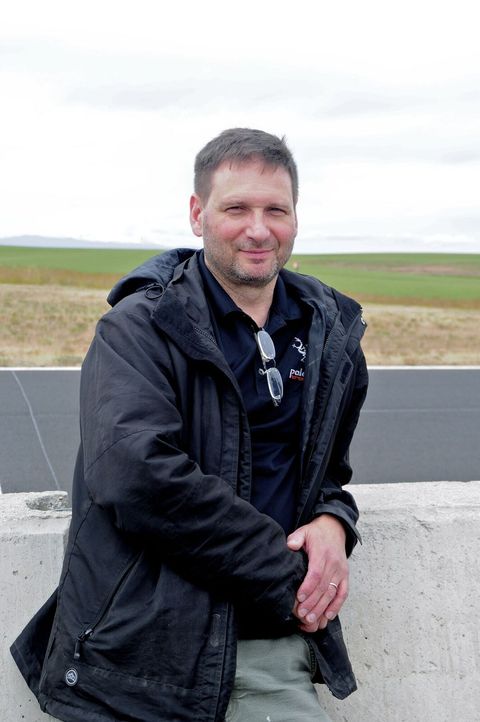 “That’s actually another patent application that I’ve come up with. And it’s tracking the modules through blockchains. All the transactions, when they’re authorized to work in a car, when they’re sold, bought, and eventually recycled, we’re going to run the exchanges for tracking all of that. We’ll just take a very small fee of the transactions, essentially kind of like credit cards or an account convenience fee. But the standard itself will be royalty free to everybody who uses it with the catch that they participate in the whole ecosystem.”

Palatov thinks his modules will offer other advantages.

“The modules have a lot of interesting features, like, they have relays on both terminals. So when the module is off, it’s completely inert, even though it’s an uninvolved module. It’s completely safe to touch or transport. They’re individually trackable, too, so if one gets stolen, it gets turned off. Basically, it won’t work in any other car other than what it’s authorized to work in.”

You could also, say, just have 30 kilowatt hours of battery most of the time and then if you want to go on a longer trip you could add more.

“It’s possible to swap the charge with those because each module is about 40 pounds. You could do it by hand. But the idea is that you fill as many sockets as you need in your car for your daily use, and then, let’s say you go on a road trip, you go to a service station that has a bunch of these standard modules sitting around and you just lease some more. They put them in for you or you can do it yourself. And then when you’re done, you just return them.”

There are still more advantages, like if one module fails, out of 10, in a normal battery pack you would lose 10% of your pack, but in this setup the other 90% is still perfectly functional and running.

Palatov’s larger idea is to make this technology free to any carmaker or battery builder that wants it.

“We’re looking to make it an open standard and license it to everybody.”

“It can be anything, we’re totally agnostic to the cell type because the technology is more about the packaging and the communications and the tracking and the fact that they have relays and the cells are connected in series only.” 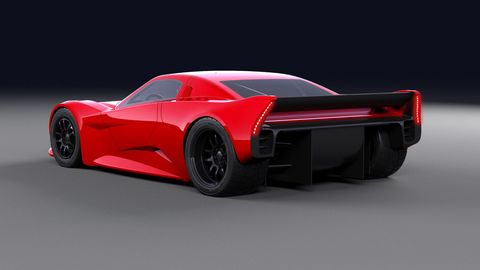 Here’s the part where he wants to change the world.

“Anybody who makes batteries now can make these modules, the processes are all the same. So it will actually cost considerably less to make them because of the volume, the manufacturing scale, because you are just making a lot of the same thing and it opens up a lot of markets for module manufacturers.”

And the first place that we will see all this is in the coming D8?

“It can be anywhere, but you know, there’s a lot of chicken and eggs in this. You’d have to have the modules built before anybody will design them in, you have to have a car to design them into before modules can be usefully built, and I’m in the unique position where I can solve all the chickens and eggs. So the D8, the D9, and the D47 will use these modules. And I’m designing those in parallel. And then I’m doing the modules in parallel. It’s just to prove to the world that this stuff works and how it works.” 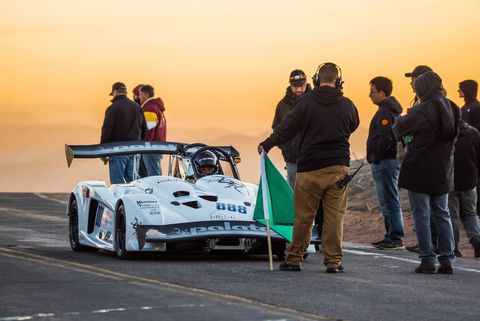 And like every other manufacturer before him, Palatov wants to show this to the world through racing. Because, win on Sunday sell on Monday. And because racing’s fun and it’s part of what the company does.

“For racing, they have interesting advantages because you can right-size the battery for each run. For example, at Pikes Peak when we ran in 2019, we ran electric cars and they actually had 700 pounds too much battery, because they were also a sized for Bonneville the following month. As a result, we didn’t do nearly as well as we could have. But here, I’m hoping to run Pikes Peak in 2022 with this. And we’ll be able to dial in exactly the size of the battery, not too much, not too little, for the run. That would make the most sense. And it also enables pure, easy endurance racing, because now each module can be handled by a single crew member. Without any weird robots or anything like that. And it’s about 10, 15 seconds to swap it and so one crew member on each side and you’re swapping 10 modules, you know, it’s under a minute pit stop.

“My ultimate dream, I don’t know if I can pull it off, but I have to have ambitions, is, I want to do Garage 56 at Le Mans in ‘23 with it (Garage 56 is reserved for experimental entries; Dan Gurney ran his Delta Wing there and this year there are two racers sharing a hand-controlled car). So we’ll see if I get enough people interested and I get some money behind me now. I might be able to pull it off.”

He might be able to pull it all off. Bonne chance!