Swiss electric car startup Piëch Automotive has added another name to its already impressive roster of execs and financial backers. Matthias Müller, the former Volkswagen AG CEO who steered the company in the three years following the outbreak of the diesel crisis, and the former Porsche CEO, has joined the luxury EV startup, taking on the post of supervisory board chairman.

“Former BMW Motorsport chief engineer Klaus Schmidt retains his role as Piëch Automotive’s Chief Technology Officer and will now also become one of two company CEOs,” the company added in a statement. “Over the past four years, Schmidt has led the creation of the company’s highly innovative modular vehicle platform, which can accommodate multiple body variants and powertrain layouts. He will oversee the management of all technical operations.”

If the name Piëch itself sounds familiar, that’s because it was co-founded by Anton “Toni” Piëch, the great-grandson of Ferdinand Piëch, along with Rea Stark Rajcic. Müller is joining the company ahead of a crucial stage: the actual construction process of prototypes after their design has been finalized, and the start of construction of the Piëch Engineering Campus in Memmingen, Germany.

“I was immediately enthusiastic about the mission of the two founders, because it is more compelling and more visionary than all the new approaches I have encountered during my work in the automotive industry,” Müller said. “I am proud to be involved in the business—it has the potential to herald a new chapter for modern mobility and shape the future of the automobile. It is an endeavor that will receive my wholehearted support.”

Just what kind of vehicle is Piëch seeking to build?

The first, one of the three planned models, is a two-seat sports car with a 500 kilometer range (310 miles) in the WLTP cycle and nothing short an 80% recharge time of just 4 minutes and 40 seconds. Heady numbers, alongside a planned launch of sales at the end of 2022 — close enough to be seen with binoculars but still feels like a long time away. 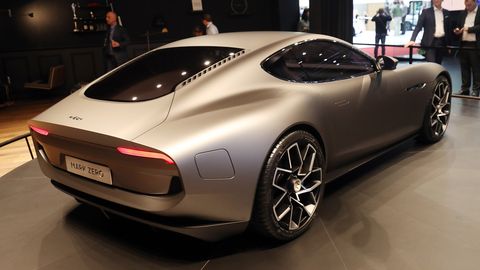 If you’re wondering how Piëch Automotive has sailed under the radar this whole time, the simple answer is that the startup did not make much noise until it made a modest-sized splash at the 2019 Geneva motor show with its Mark Zero concept, reflecting a lot of influence from a prior Jaguar-badged concept car designed by Piëch’s design chief Laszlo Varga. But prior to the Geneva motor show Piech had stayed quiet, making its Geneva debut a surprise even for those keeping a close eye on the EV world.

Speaking of the EV world, Piëch intends to underpin its cars with a modular platform quite different even from the MEB platform whose development Müller oversaw during his last few years at Volkswagen. Instead of hiding its battery underneath the floor, the concept chassis featured a battery above the rear axle and also along the transmission tunnel. The concept also had a 201-hp motor positioned in the front axle and two more motors for the rear wheels. Prior to the Geneva motor show appearance the startup indicated that it also wanted to field an SUV and a four-door sedan.

“The company’s highly innovative modular vehicle concept is unique in its flexibility, allowing numerous body variants, drive types and continuously possible upgrades in hardware and software,” the company promises. “Piëch Automotive pursues new ways to operate with a capital and resource light business model, in both construction and in operation, which helps to secure the future viability of the company.”

But Piëch intends the platform to be suitable for EVs and even gas-engined vehicles alike, making it a rarity in the field of EV startups, most of which are not especially friendly to internal combustion engines.

The promised range and recharge times, as well as the design, certainly pose a lot to deliver on in the next two years, as Piëch is in a thinned-out field of EV sports car startups with price tags not aimed at ID.3 buyers, to put it mildly. In fact some have already flamed out in recent years. But it’s clear Piech is targeting buyers who are perhaps waiting for the next Tesla Roadster, promised to have nothing short of rockets to aid in maneuvering. That’s the competition that Piëch effectively faces. Tesla should have its European factory up and running by then.

Whether the Swiss startup can challenge Tesla’s volume even with the pricey Roadster model, once it materializes with or without rocket assist, remains to be seen.