Teslas hold their value more than most cars, yet they sell faster on the used market. Used Model 3s sell faster than most new cars.

iSeeCars ranked the top 10 fastest-selling used cars. These cars sell 1.3 times faster than the average used vehicle. The Tesla Model 3 tops the list and commands a strong lead despite its high resale value. The Tesla Model S lands in the 10-spot.

“The effective demand for these vehicles has slowed in the wake of the COVID-19 pandemic due to lockdowns and downturns in the economy, but the change was much more dramatic for new vehicles than for used vehicles.”

Ly also notes that many of these fastest-selling vehicles are those that are popular and hard to find. 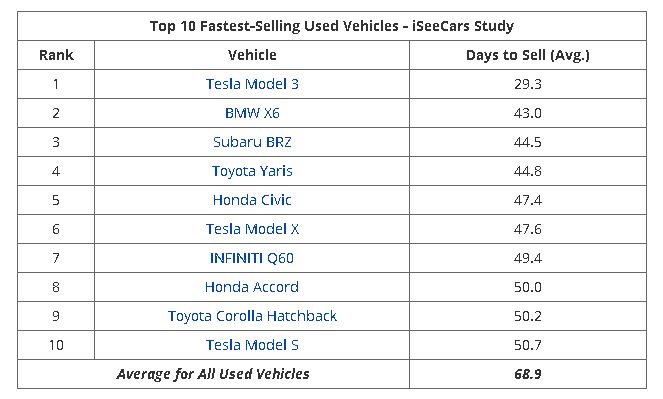 As you can see, the average for all used vehicles is 68.9 selling days. The Model 3 only takes an average of 29.3 days to sell, while a used Model S sells in an average of about 50 days.

According to Ly, since the Model 3 just started deliveries a few years back, there is low inventory on the used market. It’s Tesla’s least expensive vehicle, it had the company’s highest number of pre-orders in history, and there was initially a long wait time to get the car. This all factors into its demand on the used market.

The Model S sells well used due in part to its competitive pricing. In fact, if you want the cheapest Tesla you can buy, an older Model S can be had for less than a new base Model 3.

On iSeeCars’ list of the fastest-selling used SUVs, the Tesla Model X comes in second. It sells in an average of 47.6 days. The average number of selling days for a used SUV is 72.1. Again, the Model X hasn’t been on the market long enough to assure a huge number of used copies available, so demand is high. 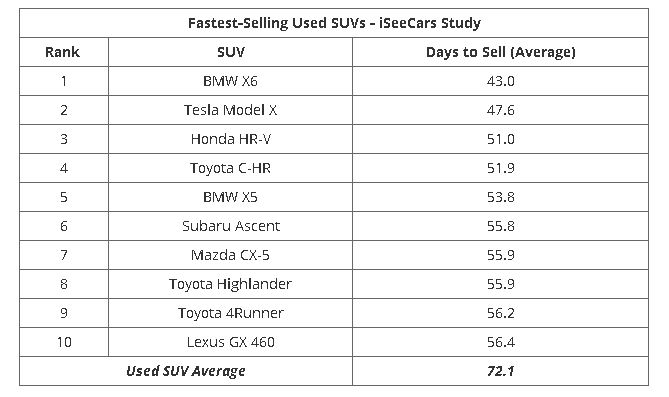 If we compare these lists to the fast-selling new cars, we get an interesting anecdote. The new Chevrolet Trailblazer tops the list at just 19 days. It’s followed by the Kia Telluride, at 25.7 days. These are the only two new cars that actually sell faster on average than a used Tesla Model 3.