The United States Postal Service took the wraps off the design of a new postal delivery vehicle that will be produced by Wisconsin-based Oshkosh Defense under a 10-year contract starting in 2023, belatedly opening a new chapter in the service’s history when it comes to mail delivery vehicles. The Postal Service calls the plan “the most dramatic modernization of the USPS fleet in three decades,” because that’s about how long it’s been since the small and boxy Grumman mail carrier vehicle was phased into use.

The contract is expected to see Oshkosh Defense produce 50,000 to 165,000 Next Generation Delivery Vehicles (NGDV) following the finalization of the design of the vehicle, which will be purpose-built to serve the needs of the USPS. The right-hand drive vehicles themselves have been engineered to work with internal combustion and battery-electric powertrains alike, with the design specifying the ability for them to be retrofitted with EV drivetrains at a certain point. This means that after a period of years working with a gas engine, the NGDV will be able to receive a battery and electric motor and stay in service.

In addition, the NGDV will finally include technologies that have been commonplace in cars for at least a decade: Backup cameras, front and rear-collision avoidance systems, traction control, automatic emergency braking, and air bags. They will also be larger and taller than the current Grumman LLV that entered production in 1987 (itself replacing the Jeep DJ-5) and which features…. none of the tech listed above.

“The Postal Service fleet has more than 230,000 vehicles in every class, including both purpose-built and commercial-off-the-shelf (COTS) vehicles,” the Postal Service noted in a statement. “Approximately 190,000 deliver mail six, and often seven, days a week in every U.S. community. The NGDV, along with other COTS vehicles, will replace and expand the current delivery fleet, which includes many vehicles that have been in service for 30 years.” 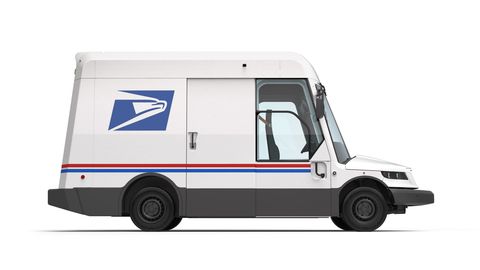 This doesn’t mean that the Grumman LLV will go out of service tomorrow or next year—Oshkosh will require a few years to replace even a quarter of the current mail delivery vehicle fleet starting 2023.

Perhaps the most curious part of the Oshkosh design (aside from the fact that it looks like a smug reptile or a cartoon duck) is the plan to retrofit the vehicles with EV drivetrains at a later stage. The defense contractor has not detailed just how this work will be carried out, or at what point in the vehicle’s life cycle this is likely to occur. Neither have the costs associated with a mass conversion been addressed by the USPS or by Oshkosh.

What’s clear is that the USPS considers an outright introduction of EVs at this stage to be cost-prohibitive. Gas-engined vehicles will still be used pending the introduction of standardized EV drivetrains, the makers of which have yet to be revealed—if they’re even identified yet. We can also assume the vehicles will rely on their own charging infrastructure, which will present its costs and challenges.

The EV infrastructure at post offices would have to be in place before the EV drivetrains are retrofitted, so an equally important part of the transition to EVs is the contract to build the charging stations for post office lots where the NGDVs can be recharged overnight.

As not all mail routes are alike, we’re also likely to see several different battery variants become available for the NGDV, depending on the areas they serve. It wouldn’t make sense for a mail vehicle to have a 200-mile battery if it only serves a small New England town, whereas mail carrier vehicles in the western plains might well need the longest range available.

The debut of a preliminary design of the NGDV follows the rollout of a number of specially engineered EVs for private retail and delivery giants like Amazon, for which Rivian has been working on a battery-electric delivery van. Amazon’s delivery needs are, of course, different from those of the USPS, both when it comes to range and size, but Amazon can also afford to spend more on a larger fleet of vehicles that are EVs from the start.

Should the USPS aim to go electric as soon as possible, or should the gas-engined mail vehicles remain through the end of the decade? Let us know in the comments below.