In the time it takes you to finish reading this sentence, Audi will sell approximately 246 Q5 crossovers to American buyers. Okay, fine, it may be closer to 244. Math has never been my strong suit. But any way you want to look at it, the Q5 is a bonafide hit for Audi. Even four years into the current model’s life, it remains the brand’s top-selling model by a wide margin. And the 2020 Audi Q5 55 TFSI e quattro takes that success story and makes it a plug-in hybrid.

Last year, even with pandemic-related production challenges, Audi still moved 50,000 of these things—nearly twice as much as the runner-up Q3. It sold more than 14,000 in the first quarter of this year alone. The Q5s you see at every mall parking lot and on highways across America range from the humble but highly competent 2.0-liter TSFI turbo four-cylinder models up to the racier 349-horsepower SQ5 variants, and of course, they all come in Sportback form now too. (You can’t be a real German luxury brand if you don’t offer less-practical faux-“coupe” versions of your most popular people-movers.)

What is new as of last year—and considerably more under the radar than an SQ5—is the Q5 55 TFSI e quattro, an admittedly awkward name for an objectively excellent plug-in hybrid. And it may just be the Q5 that stands above all the others. 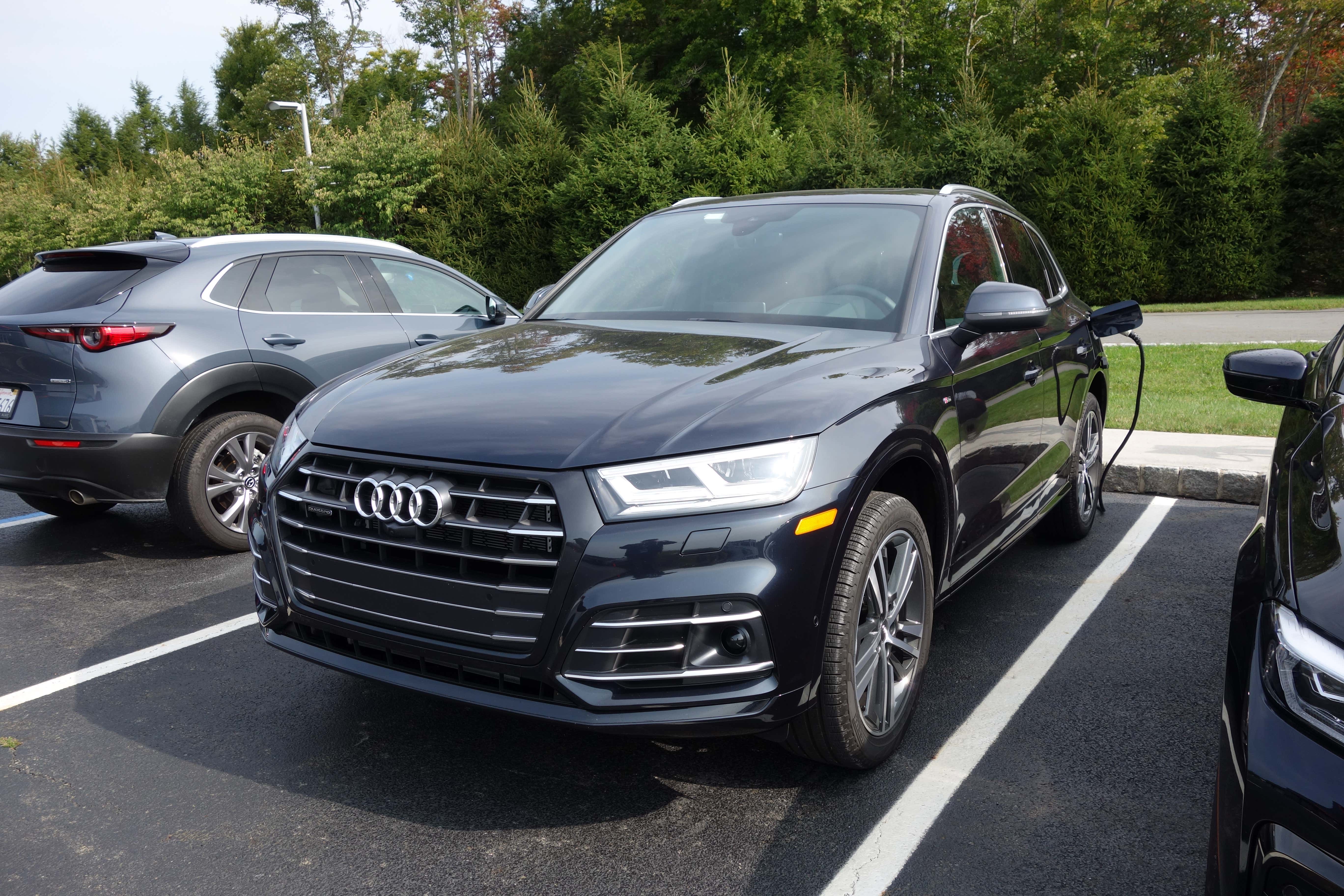 Let’s get this out of the way first: The name is goofy as hell. As a grown, adult man, I have little desire to say “Audi Q5 55 TFSI e quattro” out loud, ever. Luckily, Audi doesn’t even bother to slap that badge on the car in North America. In fact, if you don’t know to look for the plug-in door opposite the fuel tank, you’d probably never know this was a hybrid at all. That quiet, discreet approach to electrification informs the entire approach to this Q5. It’s competent, low-key, drama-free, and never shouts at onlookers that you’re, like, really into the environment, man, the way a Prius or a Tesla might. It’s one of the most “normal” methods of hybridizing a car that I’ve ever experienced, and in that way, it feels like it previews the near future where almost every internal combustion car on the road should be electrified in some way. And if automakers can come close to what the Audi Q5 55 TFSI e quattro (ugh, sorry) can do, then nobody will be complaining.

The hybrid Q5 comes with some very familiar bits, but that’s not a bad thing. You get the ubiquitous and highly effective 2.0-liter TFSI, which pulls duty in a ton of Volkswagen Group cars and is one of the best four-cylinder turbo motors in existence. It also packs the seven-speed S Tronic dual-clutch gearbox—which is equally good—and the handsome, recognizable, understated Q5 sheetmetal. I think the current Q5 is a great-looking car, one I’d be happy to be seen in every day. 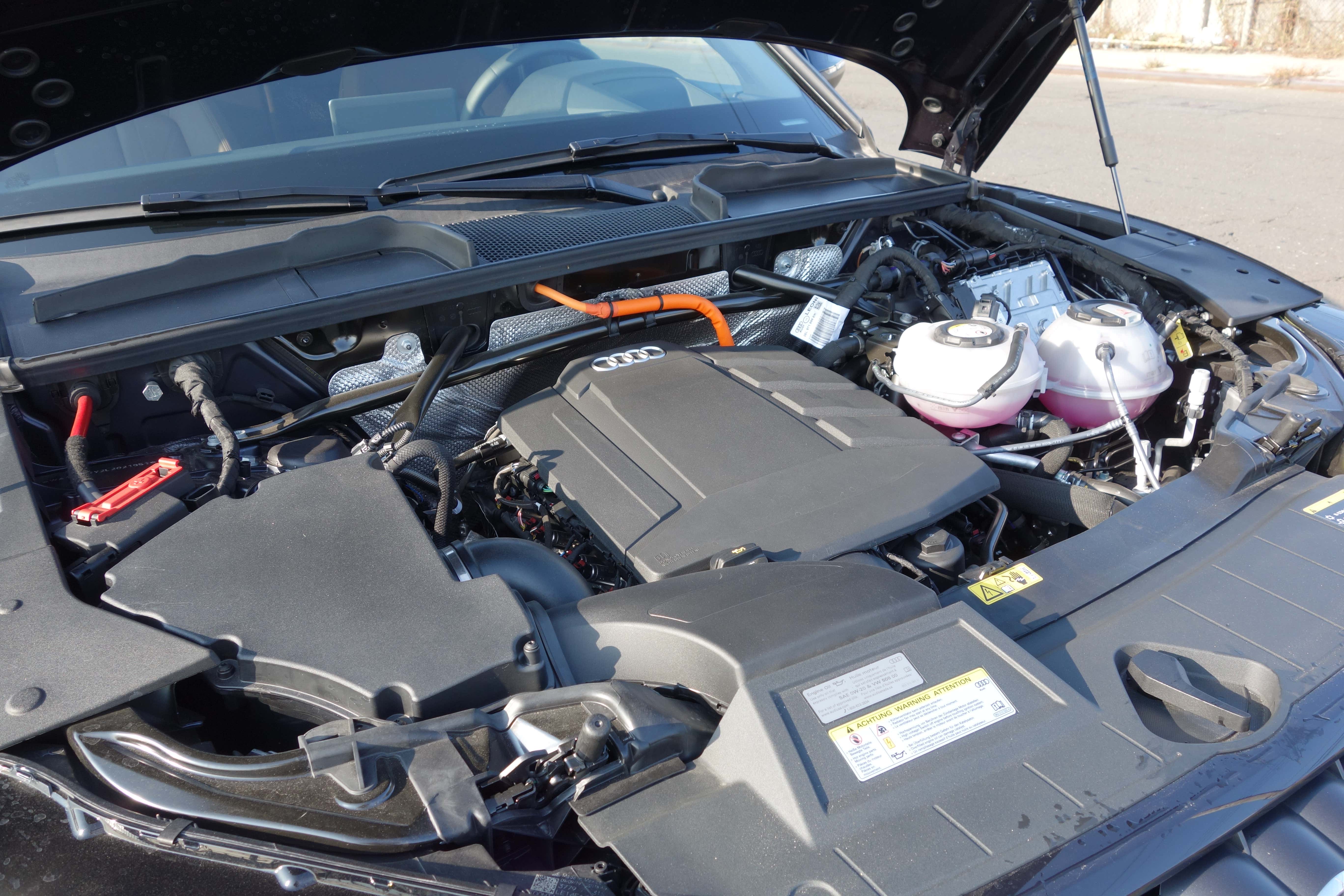 The star of this show, then, is the 14.1-kWh battery pack, which adds not only fuel economy and about 20 miles of electric range but a nice power boost—an extra 141 horses, to be exact, for a total system output of 362 HP. Though that battery adds more than 500 additional pounds of curb weight, the hybrid Q5 can move just fine. Zero to 60 mph happens in about five seconds. 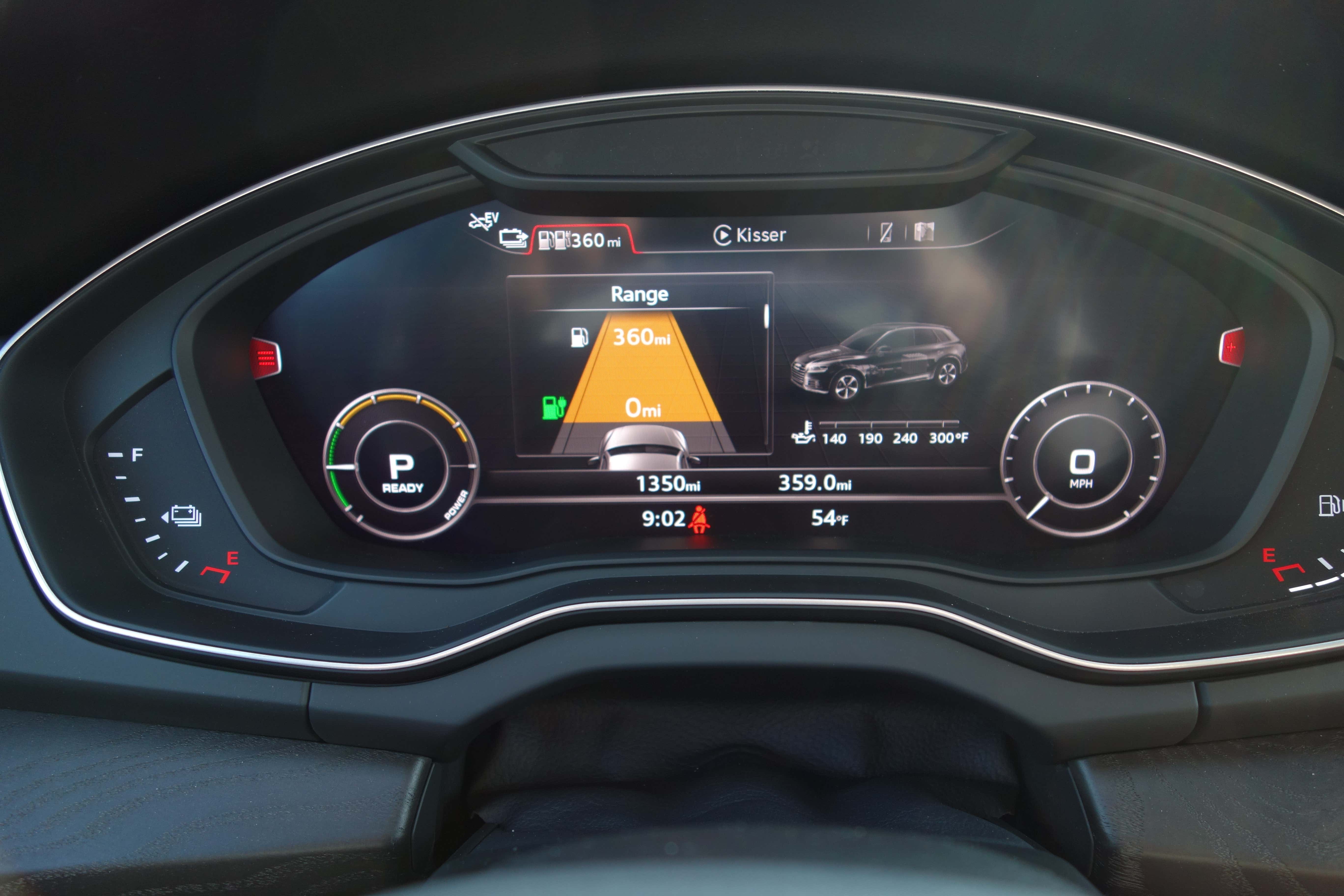 I will say it doesn’t feel that quick, but to me, the biggest benefit was the fuel savings. I ran a variety of errands in Brooklyn, Manhattan, and then a trip to Monticello Motor Club about two hours outside the city (for a BMW track day, hilariously enough, and I even charged the Q5 there, too) and did it all on one tank of gas. 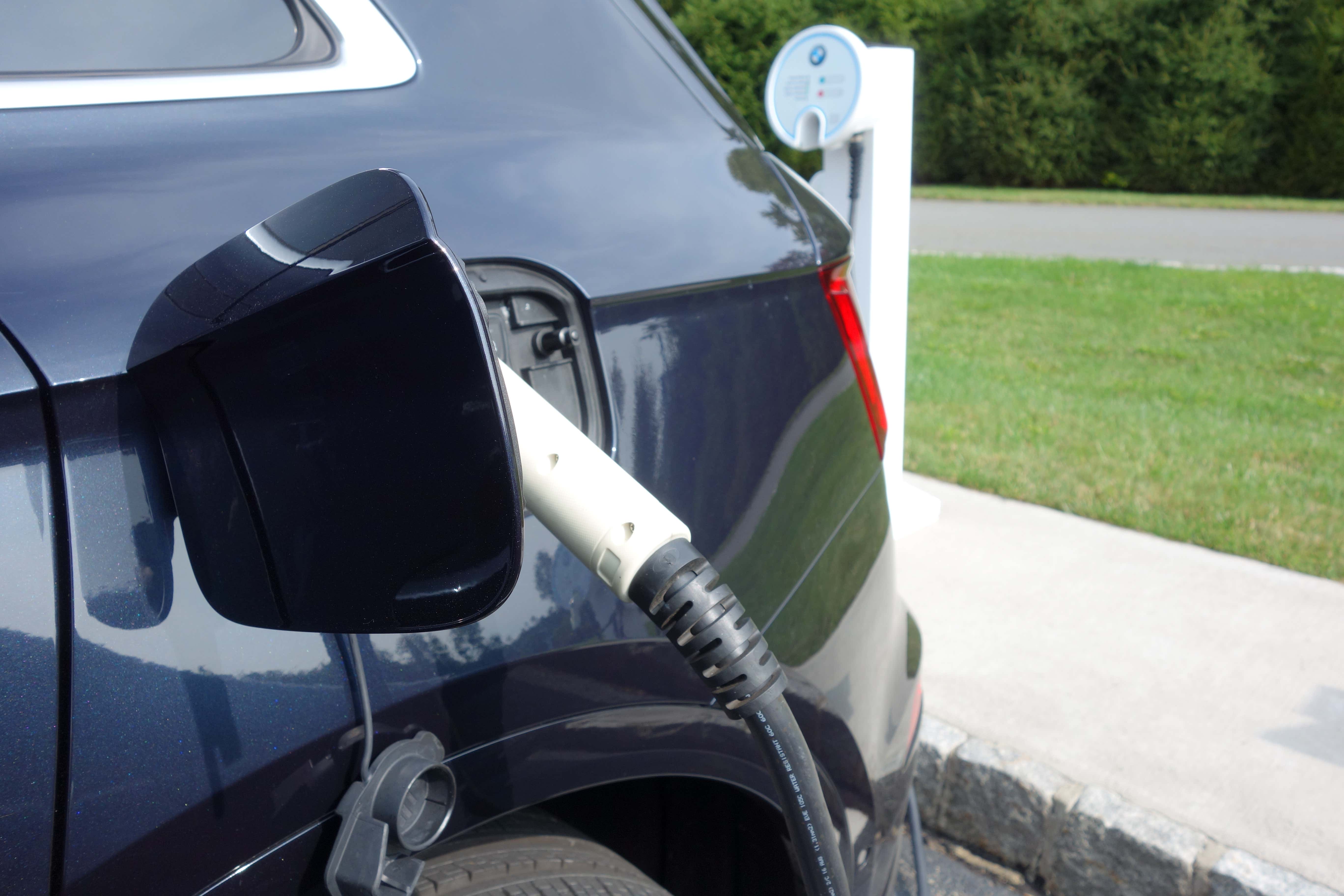 For a lot of drivers who are able to charge at home, the 20 miles of electric range—especially used during low-speed city driving—could mean very little gasoline use at all. Also, Audi claims you can get it fully charged in about two and a half hours on a 240-volt Level 2 charger, which is pretty fantastic.

The ride quality is superb, the seats are incredibly comfortable, and the interior materials are top-notch in typical Audi fashion. My tester’s Nougat Brown leather trimmings were extremely choice; highly recommended. There’s a lot this thing does well, just without dipping too much into your fuel budget.

As reasonably quick as it is, don’t expect Porsche Taycan levels of electrified thrust here. I can say the hybrid Q5 never felt as fast as a car with that zero-to-60 mph rating should, and given the weight here, the internal combustion engine can feel a bit sluggish when it’s called on to act alone. 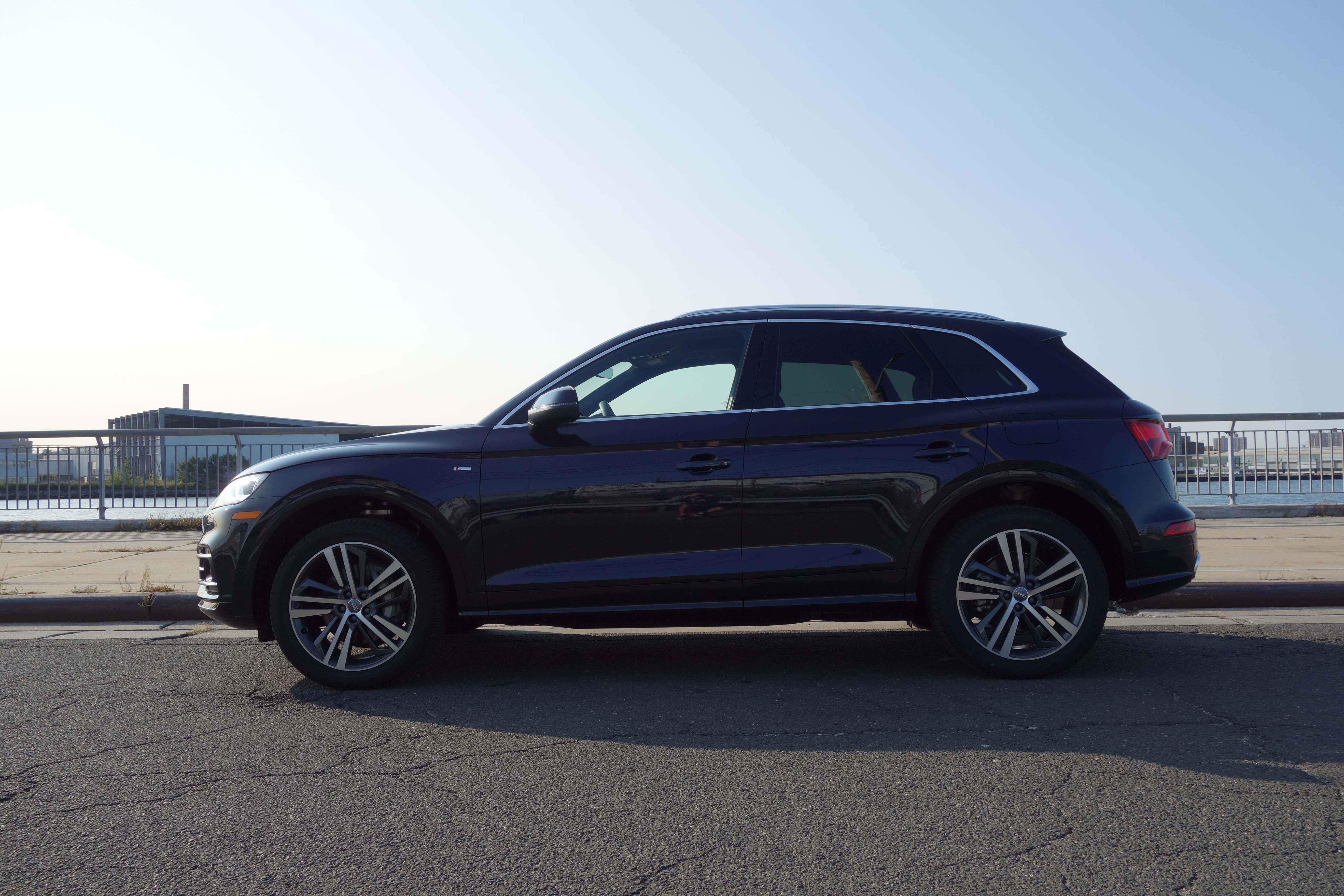 It’s also worth noting that those electric miles evaporate pretty quickly in highway driving. And thought it kind of evens out with the battery’s help, for packaging reasons you do lose four gallons of gas with a smaller tank here versus other Q5s.

This thing doesn’t wear an “S” or “RS” badge, and that’s felt in any corners you deign to put it in. I’d say the handling squishy; while the ride is very pleasant, it’s not really what I’d call a performer. It’s sluggish and soft when tasked with aggressive driving. Then again, I can’t really fault it much here; this would be a great daily driver if the other space in your garage is taken up by something a bit more fun. 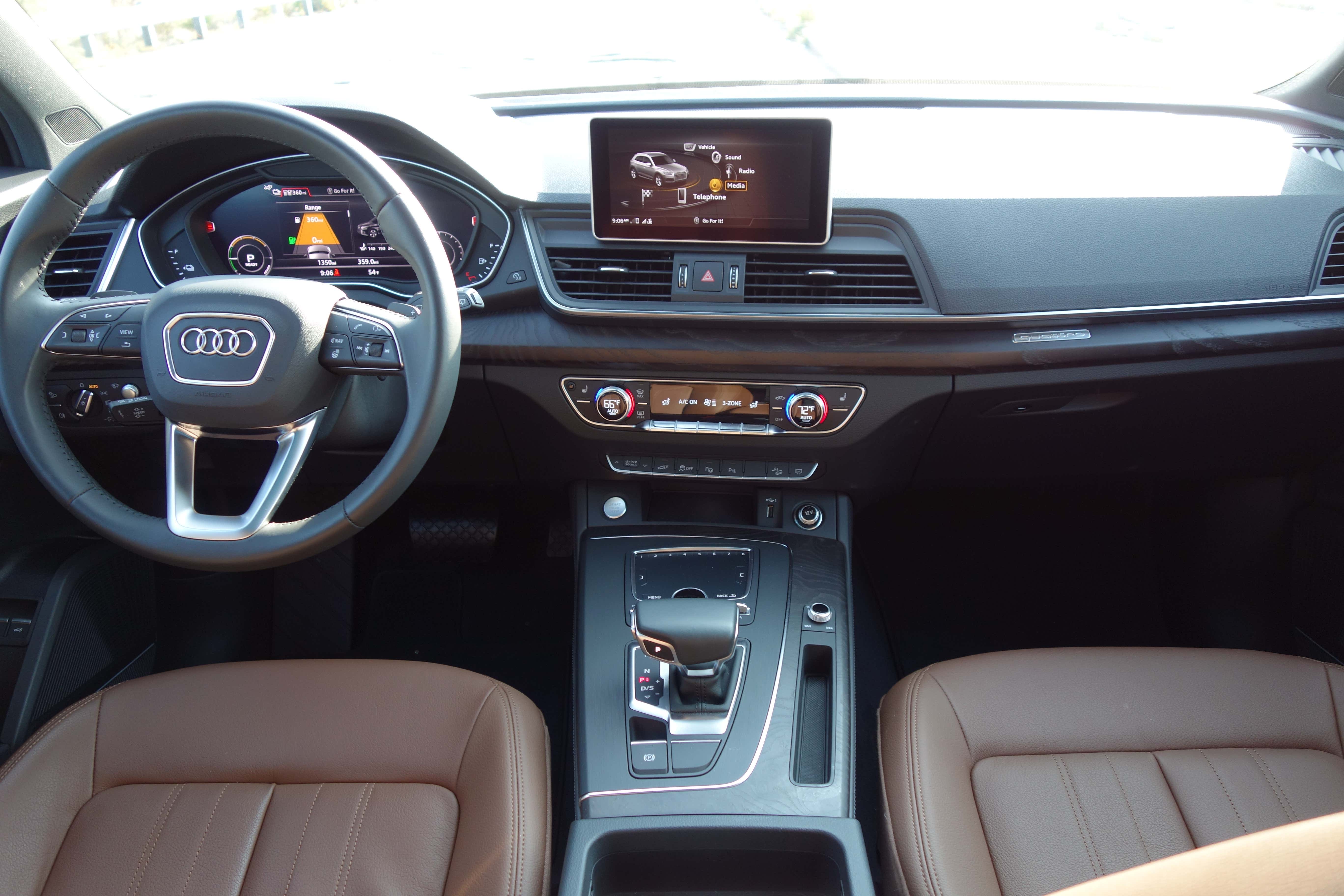 You’ll also notice my tester is a 2020 model. That means it had the rotary knob input for the MMI infotainment system, and that’s my least favorite means of doing business. Manually entering addresses into the navigation one character at a time with a click wheel is a painful, irritating process. 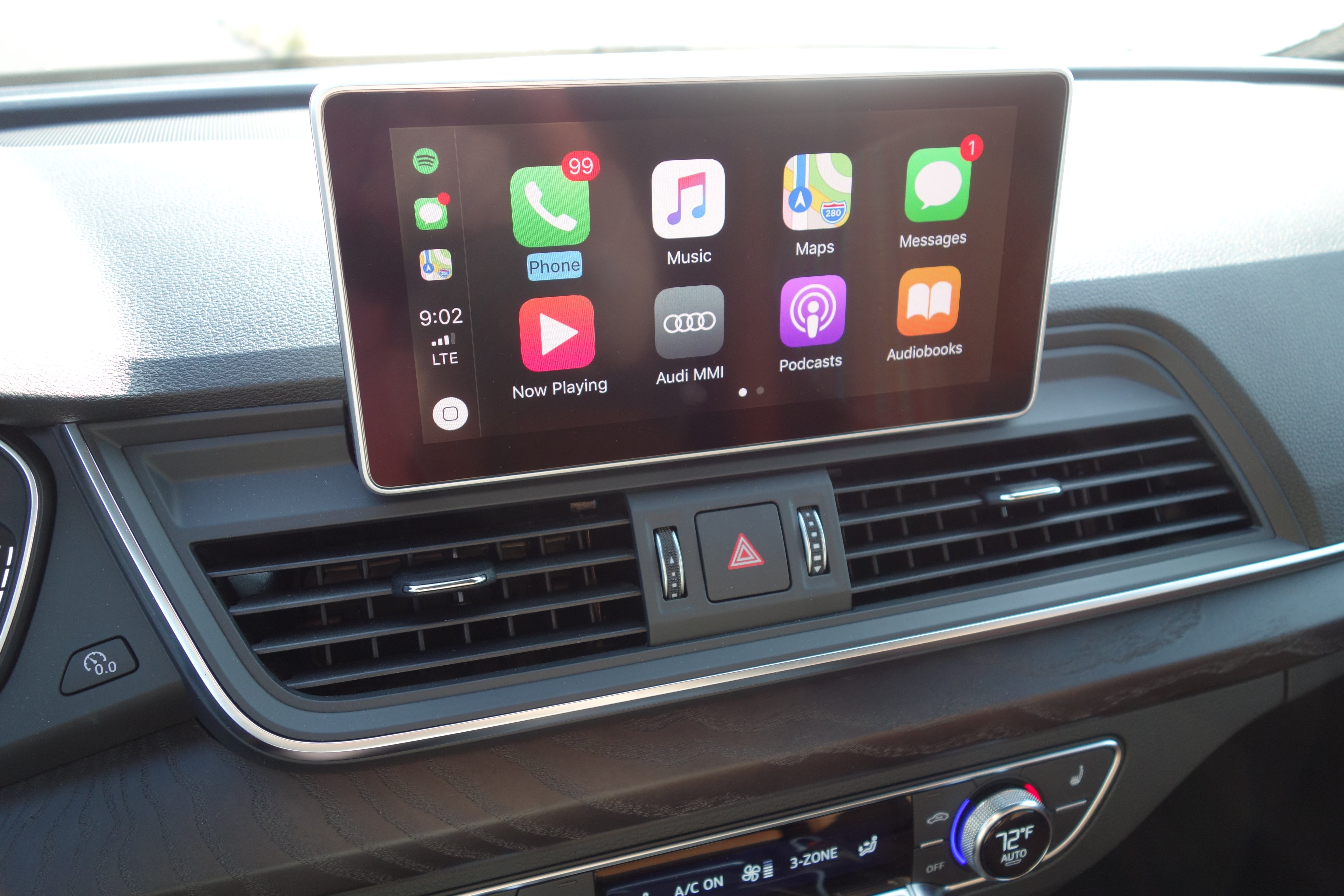 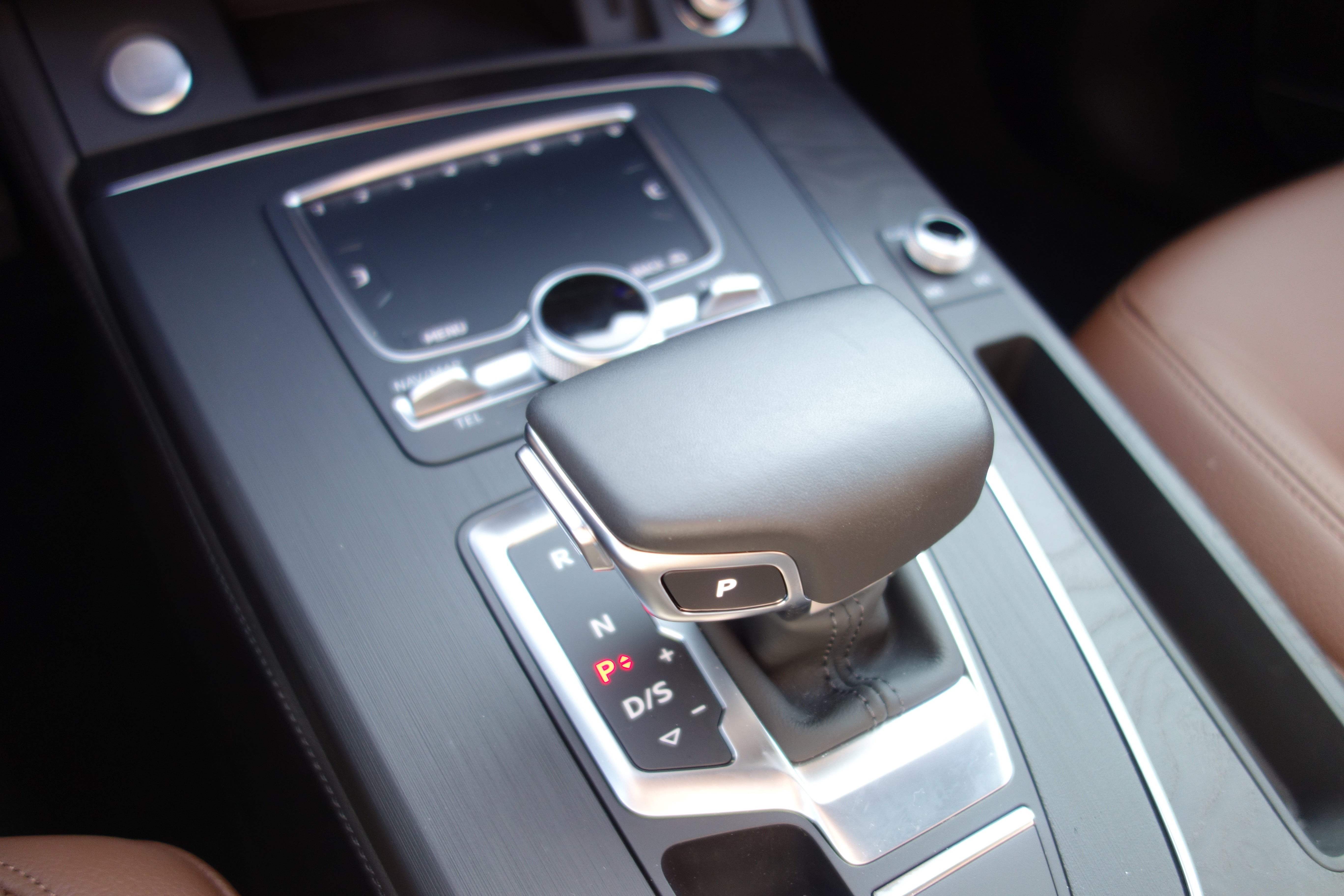 Most of the time I bypassed this by just using my phone. There’s Apple CarPlay, too, but it’s not wireless. Apple CarPlay just doesn’t work that well with non-touch interfaces. It wasn’t designed for that.

Luckily, almost all of that has been fixed for the 2021 model year with the addition of a new touchscreen MMI interface and wireless CarPlay. Android Auto, however, still requires a cord. But for ’21, it’s now a 10.1-inch screen instead of an 8.8-inch one and boasts a new interface, new features, and 10 times the processing power, Audi says.

Beyond that, the tech is first-rate: Range indicators, menus, adaptive cruise control controls, and the all-digital dashboard make any Q5 feel truly cutting edge. Especially now that the knob is gone. 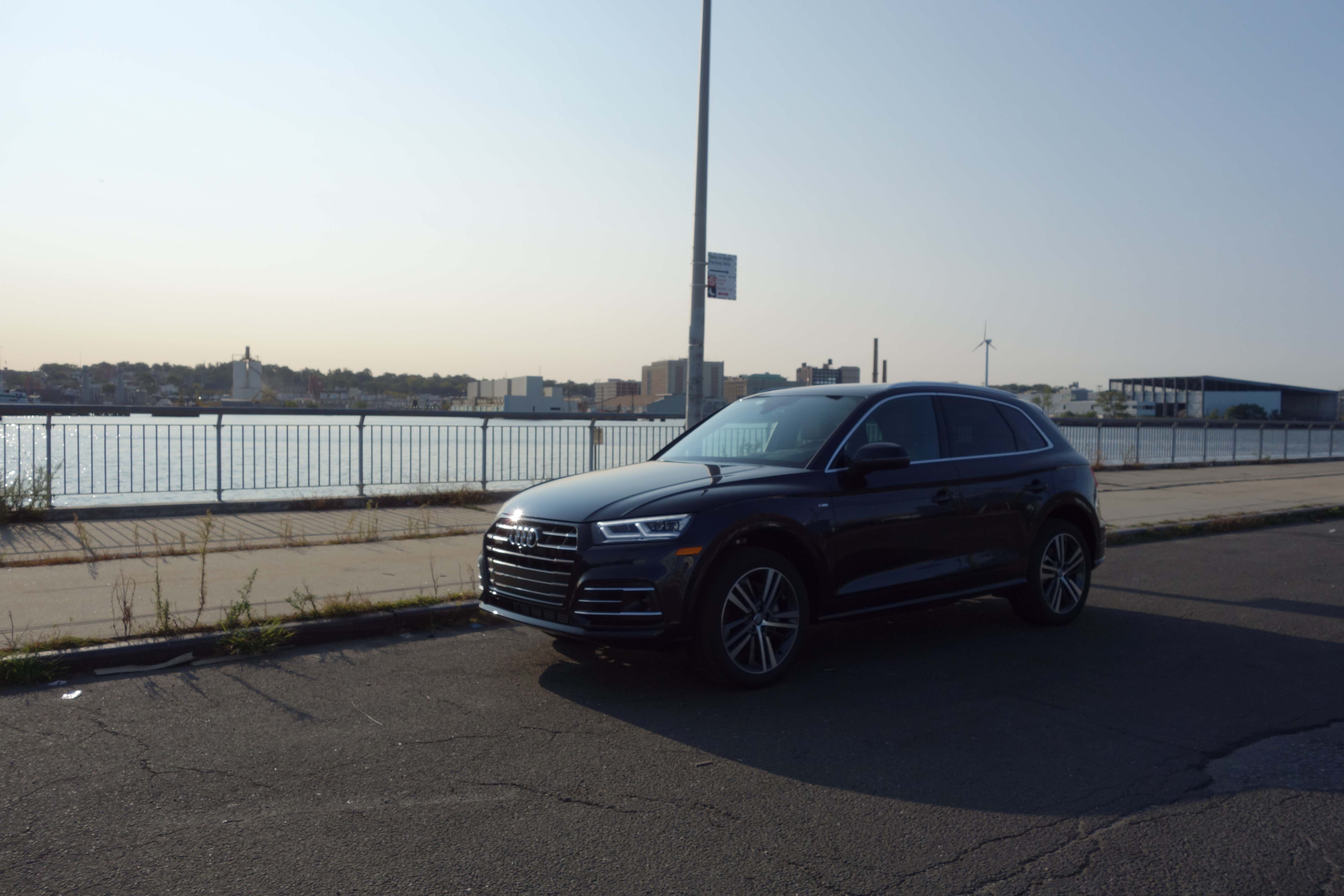 After spending a week in a Q5, I get why these things are so popular. I’d consider one, too, if I had $63,890 to spend on a nice crossover. It’s comfortable, handsome, great on tech—even improved for 2021!—and in hybrid guise, the fuel savings alone make it a compelling buy.

It may not be the shoutiest hybrid on the road, but the Q5 55 TFSI e quattro—and after this, let us never mention that absurd name again—is another car that makes a stellar case for “normal” vehicles going hybrid in the years to come. There are very few downsides to electrification here. If you aren’t ready to go full-on SQ5, this is the midsize Audi crossover you want.

Email the author at [email protected]