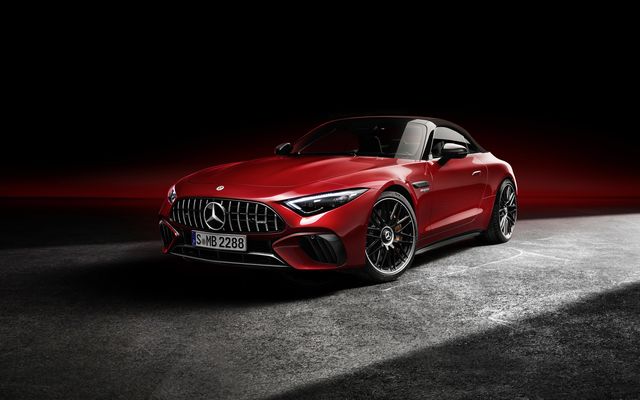 Carmakers don’t necessarily sell a lot of 2+2 roadsters, but the style-heavy icons are wildly important as aspirational halo cars whose pomp and circumstance carry the entire rest of the car line out the showroom doors and into customer garages.

Mercedes sales figures in the States have hovered right around 350,000 for the last eight years or so. Of that, the stylish SL makes up only about one half of one percent, 0.5%. Yet its status as a true halo car for the brand makes it much more important in the bigger picture.

“An SL from Mercedes is pretty much the biggest icon you can get,” said Daimler’s head of design Gorden Wagener. “Ever since the 300 (SL of 1952), this is next to the S-Class, probably the core of the brand, probably even stronger than S-Class.” 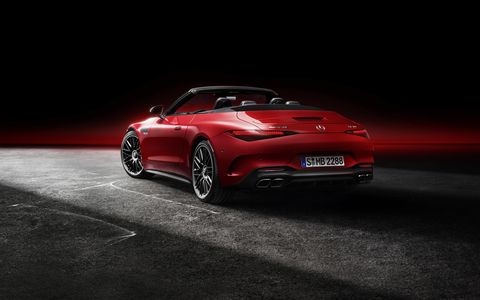 It’s the same at other manufacturers. BMW sold fewer than 8000 8-Series cars last year, fewer than that figure of its 8-Series cabriolet. Lexus LC 500 charts similar numbers; while luxo-performance style icons like the Porsche 911 Carrera cabriolet, Aston Martin DB11, and Ferrari Portofino are aspirational vehicles both inside and outside their segments. So, cars like these serve an important purpose, in addition to being fun to drive and cool to own.

“I think it was time for a restart of that icon,” said Wagener. “As I’m a big fan of the very first one, the 300 SL, I drove five Mille Miglias with it… this (new one) is a very special car and I wanted to make it as close as possible to the very first one and try to infuse that (original car’s) DNA into the new model, with the proportions, with the surfacing, but of course make it make it a very modern SL, an SL of the ‘20s, a digital roadster.”

As you will see, that’s borne out by the new SL’s promising proportions and pleasingly powerful drivetrain. The car will be officially known as the Mercedes-AMG SL, but while Mercedes is in the name, the car is all AMG. The three-pointed star’s performance subsidy is headquartered in Affalterbach, Germany, far enough away from company headquarters in Stuttgart that power and performance can run just wild enough to still fit inside the company mandated wheelbase and design-spec exterior. 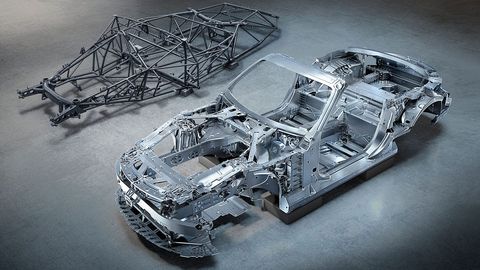 The roadster rides on an all-new-from-the-wheels-up aluminum, steel, magnesium, and “fiber composite” chassis, reminding us that the original letters SL stood for “Super Leicht,” or “Super Light” (or “Superleggera,” if you want to get fancy). Thus, torsional rigidity is up by 18 percent over the previous model, transverse rigidity is 50 percent over the AMG GT, and longitudinal rigidity, or what we might call bending resistance, is up 40 percent. The car shares no parts with the AMG GT, by the way—or with any other car, for that matter. At least so far.

The car has a relatively long wheelbase, short overhangs front and rear, and a steeply raked windshield. It comes with a soft top instead of the previous vario-roof hardtop, saving 46 pounds right there. It opens or closes in 15 seconds at speeds up to 31 mph. The interior features everything from Mercedes’ Airscarf neck heaters to a nifty 11.3-inch touchscreen that tilts from 12 degrees up to 32 degrees, as you wish.

The exterior has a rounded look not dissimilar to that of the EQS, but on a smaller, sportier scale. It features a two-part Airpanel air-control system in front and an active rear wing with six settings.

Under that aerodynamically efficient hood is a handcrafted AMG 4.0-liter twin-turbo V8 with twin-scroll turbos. The SL will come in two models: SL 55 and SL 63. Both get 4.0-liter twin-turbo V8s but offer different outputs. The SL 55’s makes 469 hp and 516 lb-ft while the SL 63’s makes 577 hp and 590 lb-ft. The SL 63 makes its greater horsepower thanks to higher boost and greater airflow, as well as software tweaks. 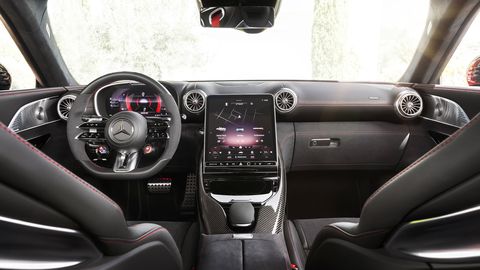 Both engines are mated to the AMG Speedshift MCT 9G transmission, wherein MCT stands for Multi-Clutch Transmission. AMG promises “an emotional gearshift experience.” It also promises “fast multiple downshifts if required” (in which case it will be doing better than the nine-speed transmission in the GLS 600 Maybach I just had for a week).

Both models will be all-wheel drive, too, with AMG Performance 4MATIC+ fully variable all-wheel drive for increased performance, AMG says. In that, an electromechanically controlled clutch variably connects the permanently driven rear axle with the front axle, AMG says. “The best-possible torque distribution is continuously calculated depending on the driving situation and the driver’s wishes.”

“The idea of Mercedes headquarters was, ‘Let’s bring back the SL to its original layout being a sporty, innovative car,” said AMG CTO Joechen Hermann. “Not like the ones before that, maybe the last two generations, really, we wanted to bring out the car to the point as a sporty car.”

But not just a brutal sporty at any cost.

“There has to be a certain comfort level within the car,” said Hermann.

So the car rides on AMG Ride Control suspension. The SL 55 gets steel springs and adaptive adjustable dampers. The SL 63 gets AMG Active Ride Control with hydraulic roll stabilization replacing passive anti-roll bars. By routing hydraulic fluid from side to side, roll is reduced or eliminated. The 63 also gets an electronically controlled limited slip diff. AMG Dynamic Select offers six drive programs, including, “Race.”

So it sounds promising. Prices are not out yet but the current model starts at about 92 grand. Look for the new SL to be in showrooms in a couple months.

Share your thoughts on the new Mercedes-AMG SL roadster in the comments below.