Fuel economy numbers can be misleading, to say the least. Take the $3.6-milion Bugatti Chiron Pur Sport, for example, which with its EPA rating of 10 miles per gallon combined is one of the least efficient cars on the market right now. Does that matter to people who want one? No. Likewise, Volvo of 1980 knew that the mediocre fuel economy numbers for its marquee 200 Series cars masked a much stronger selling point. It just needed to figure out how to tell people.

Just past the second oil crisis in 1979, what Volvo Cars USA couldn’t blame on the government’s standards was how heavy the 1980 200 Series was due to all the steel Sweden put in it—and what that meant for the pushrod B20 and single overhead cam B21 four-cylinder engines, despite all of their variants being fuel-injected in the US market. Knowing that bringing up exact EPA figures would do them no good in marketing, Volvo decided to focus on something else: longevity. 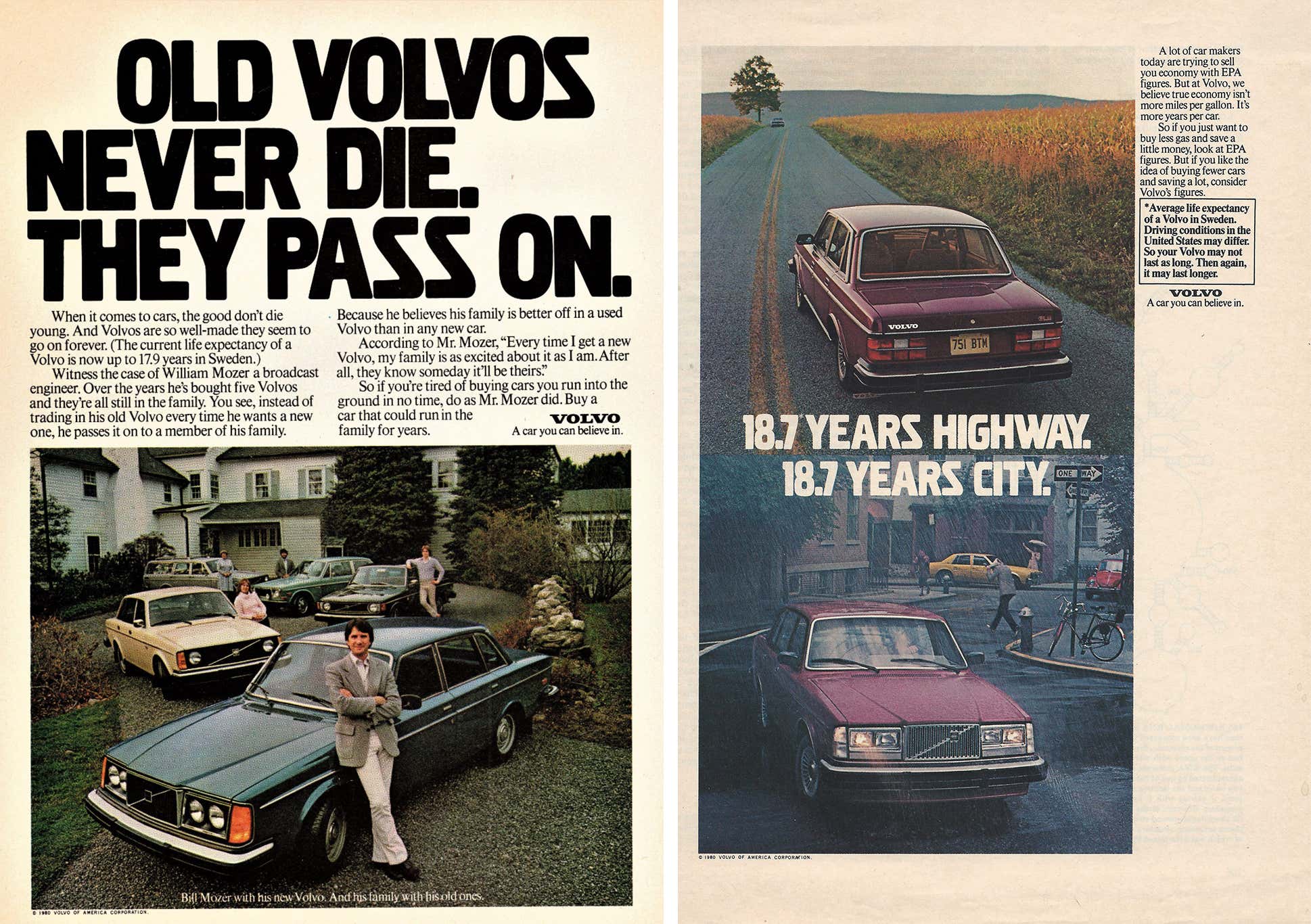 Welcome to Ad of the Week! Vintage ads are fun. They come from a time when enthusiasts gathered their knowledge mostly from print magazines, TV and radio ads, and billboards sized to fit several land yachts. We’ll be taking a deeper look at one every week to explain the claims, context, and how that all worked out in reality.

This North American ad campaign launched in 1980 introduced potential customers to trustworthy people like broadcast engineer William Mozer, who bought five Volvos over the years to sort out his family, knowing that the actual life expectancy of Volvos in Sweden at the time was up to 17.9 years. Another print ad from 1980 claimed that very same figure to be at 18.7 years in the Swedish market, quickly adding the disclaimer that “Driving conditions in the United States may differ. So your Volvo may not last as long. Then again, it may last longer.”

Indeed, some of them have. 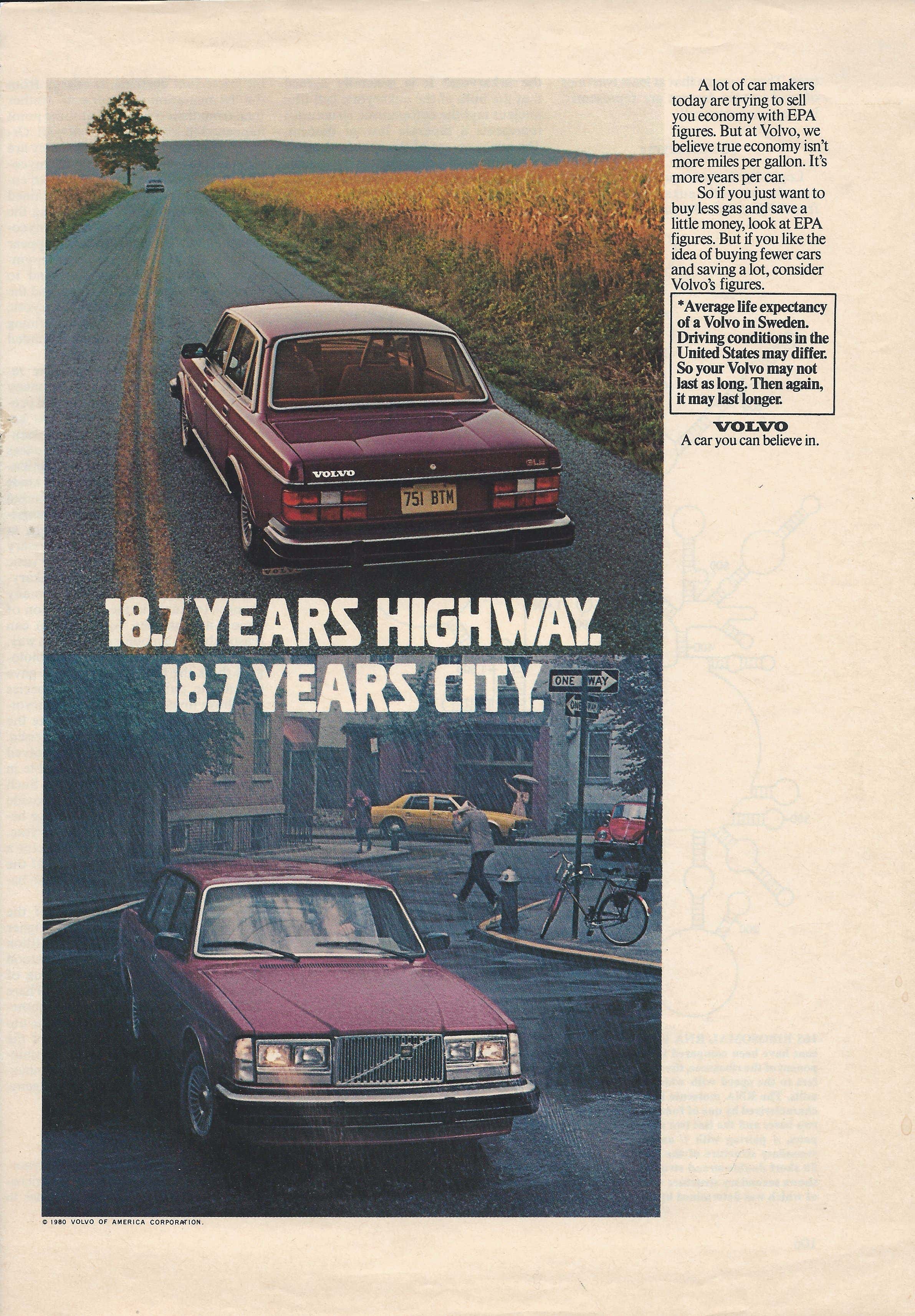 If you take local air pollution out of the equation, it’s true that the longer you drive a vehicle, the smaller its environmental footprint should be. When it comes to fuel economy, my ultra-compact Autobianchi from 1985 also returns a steady 40 miles to the gallon, which I consider to be a respectable figure. Either way, buying a new car is a major purchase, so the Volvo of America Corporation was right in suggesting that the longer your car have lasted, the less you’ll care about the accuracy of those EPA estimates.

Americans could buy certain new Volvo 200 Series models until the end of 1993, which should have lasted them well into the 2010s according to that 1980 promise of Swedish longevity. You still see them around sometimes, but that pesky disclaimer is true—there are only a few places in the US where those last 200s were likely to last that long, and those ranks are dwindling.

Just to remain on the safe side, by 1981, Volvo switched to claiming that a “Volvo’s life expectancy is 1/3 longer than the average life expectancy of all other cars on the road”, at least according to an analysis conducted by Ken Warwick & Associates, based on US registration data for Volvo and the automobile industry as a whole, and not by individual make.