Hello, fellow kids! I hear what’s lit with the teens is to be condescended to by a large multinational corporation. That’s what someone who’s handling BMW’s marketing team thinks, anyway, and they’re doing so in the cringiest way possible to promote the new iX electric SUV.

At this point, we’re all a bit tired of mocking BMW’s current design direction, particularly its gigantic grilles. To say they’re polarizing would be the charitable read, but I prefer more accurate descriptions like “cursed beaver teeth” or “a hideous robot version of the Killer Rabbit from Monty Python.” Instead of taking the constructive criticism—including that of current BMW owners who like, just can’t even, breh—BMW is doubling down in a way that’s openly hostile to its existing fanbase. The entire marketing campaign for the iX centers upon telling BMW’s followers that we’re wrong.

BMW hit peak cringe with this campaign on Sunday, unearthing the good ol’ “ok boomer” meme in response to someone’s comment on YouTube:

Did…did anyone tell the social media department that “ok boomer” died over a year ago the second it appeared in a New York Times thinkpiece? Or that it last peaked in late 2019, according to Know Your Meme? No? Carry on, then.

Not only is BMW writing off critics as boomers who are resistant to change, but they even quoted one such comment right there in the graphic. It’s not just this guy, either.

As Jalopnik notes, this iX campaign isn’t just a string of smug tweets. The premise of an entire two-minute commercial for the iX is just “someone is wrong on the internet.”

The commercial, entitled “What’s your reason not to change?,” features quotes about the iX from social media including “Let me unsee this,” “Can’t you make electric cars look like normal cars?,” “Are you still making cars for normal people?” and “Looks like a low-budget 80s sci-fi movie.” The narrator rebuts them all with, “Did we somehow start to feel uncomfortable with the unknown? Or did we just stop being open for anything new?” The actor behind the wheel even swipes comments away.

Just in case this isn’t enough doubling down on it, BMW also hopped into its Twitter replies to tell more folks who think the iX is an i-Sore that their largely subjective judgements are wrong: 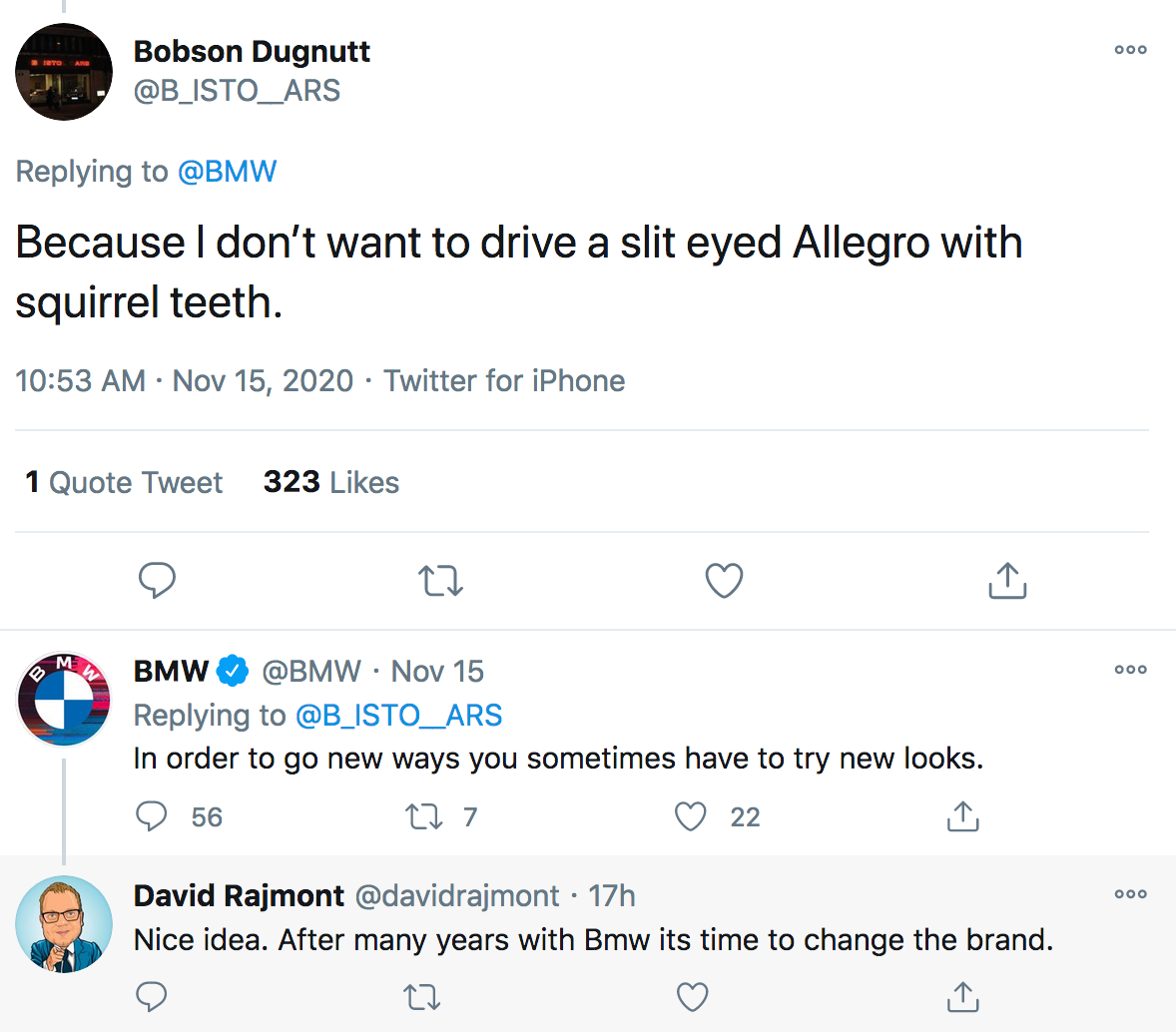 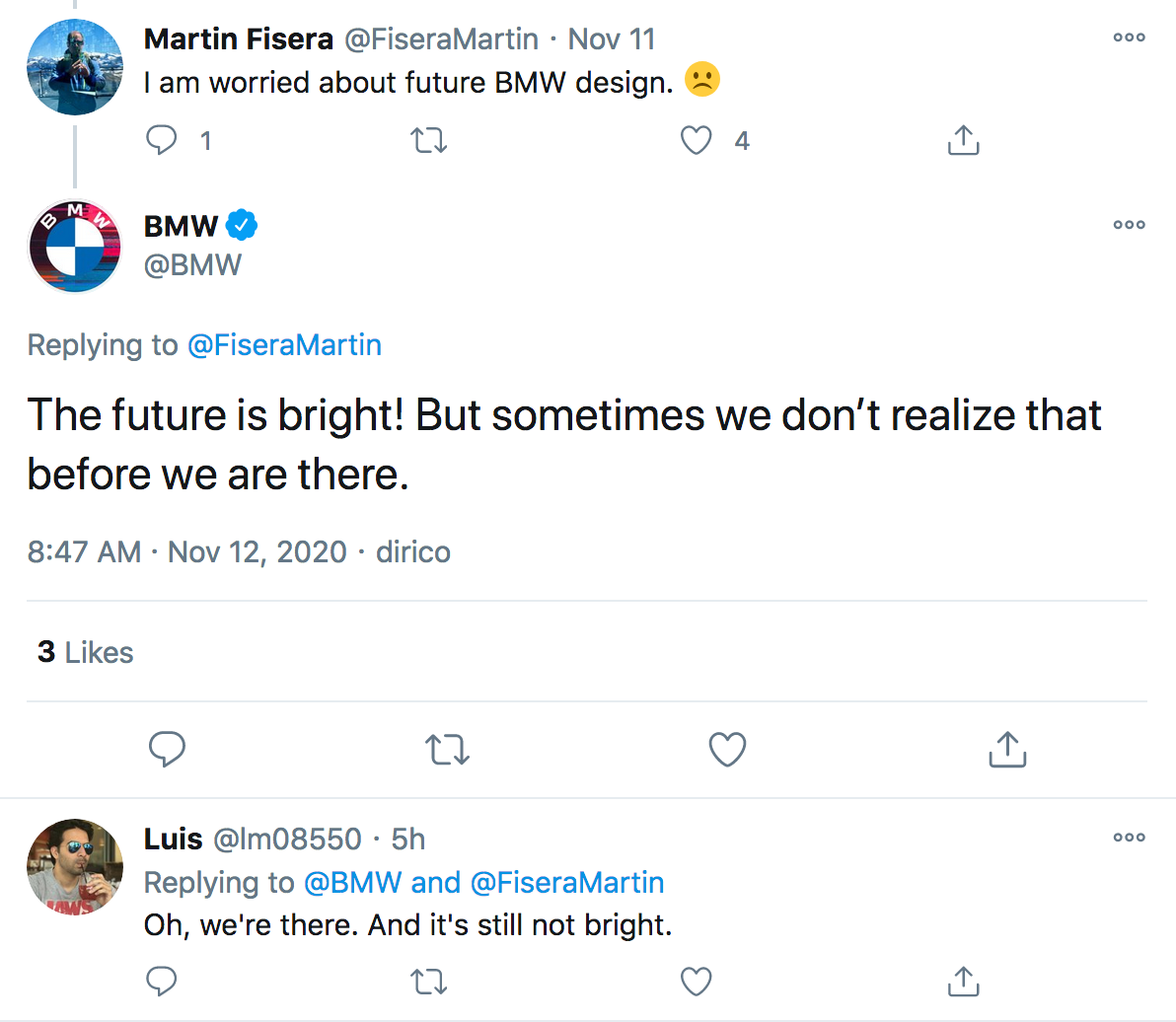 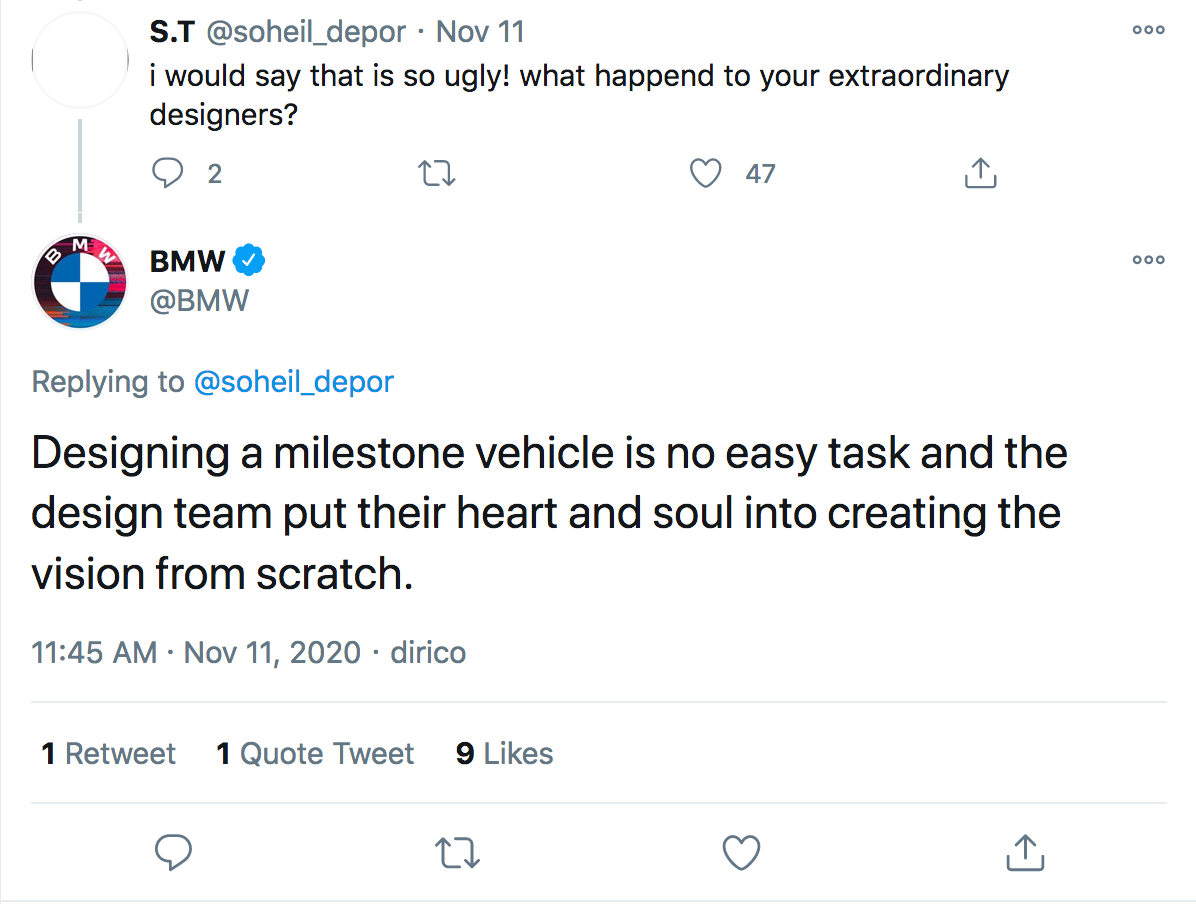 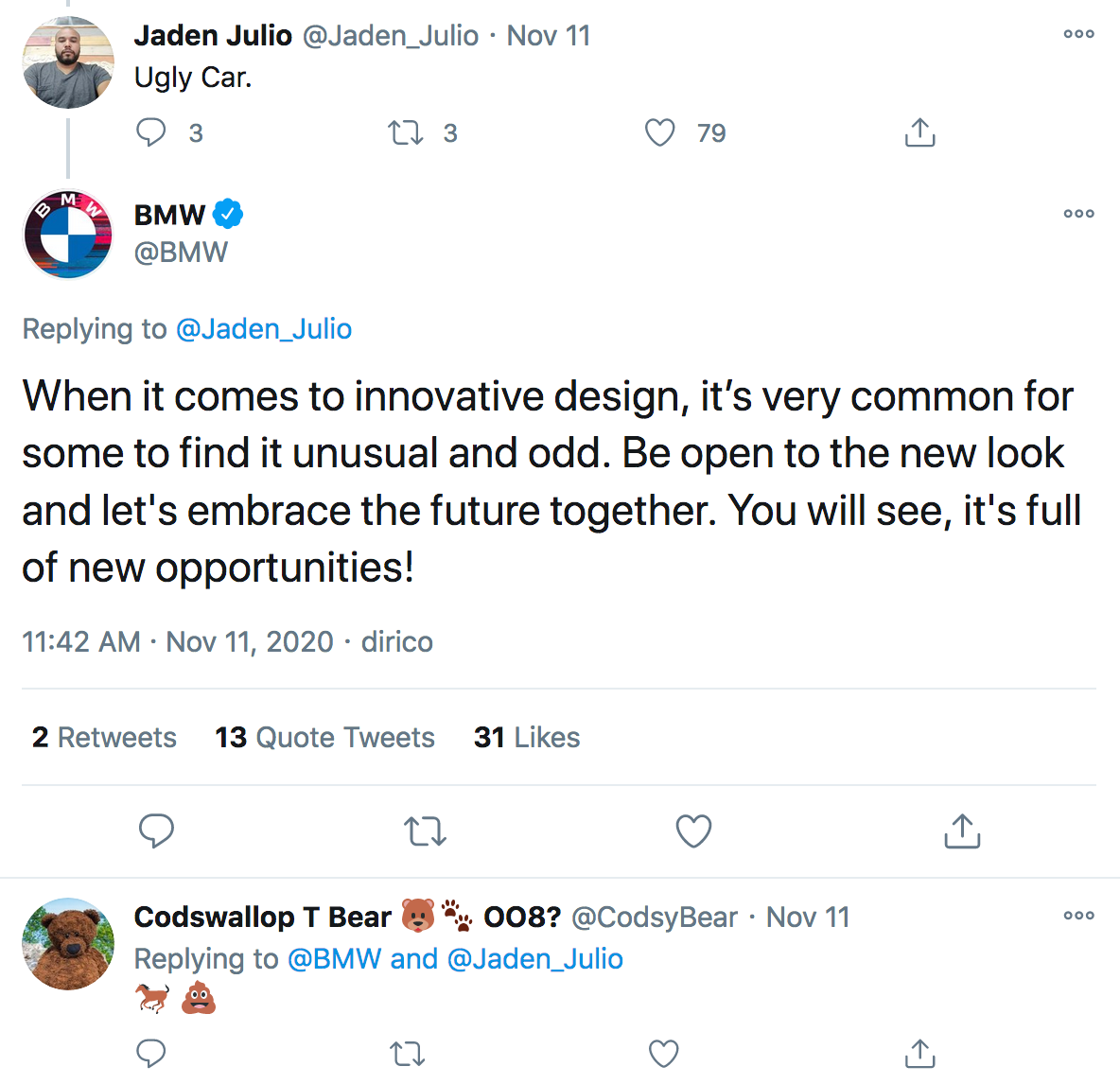 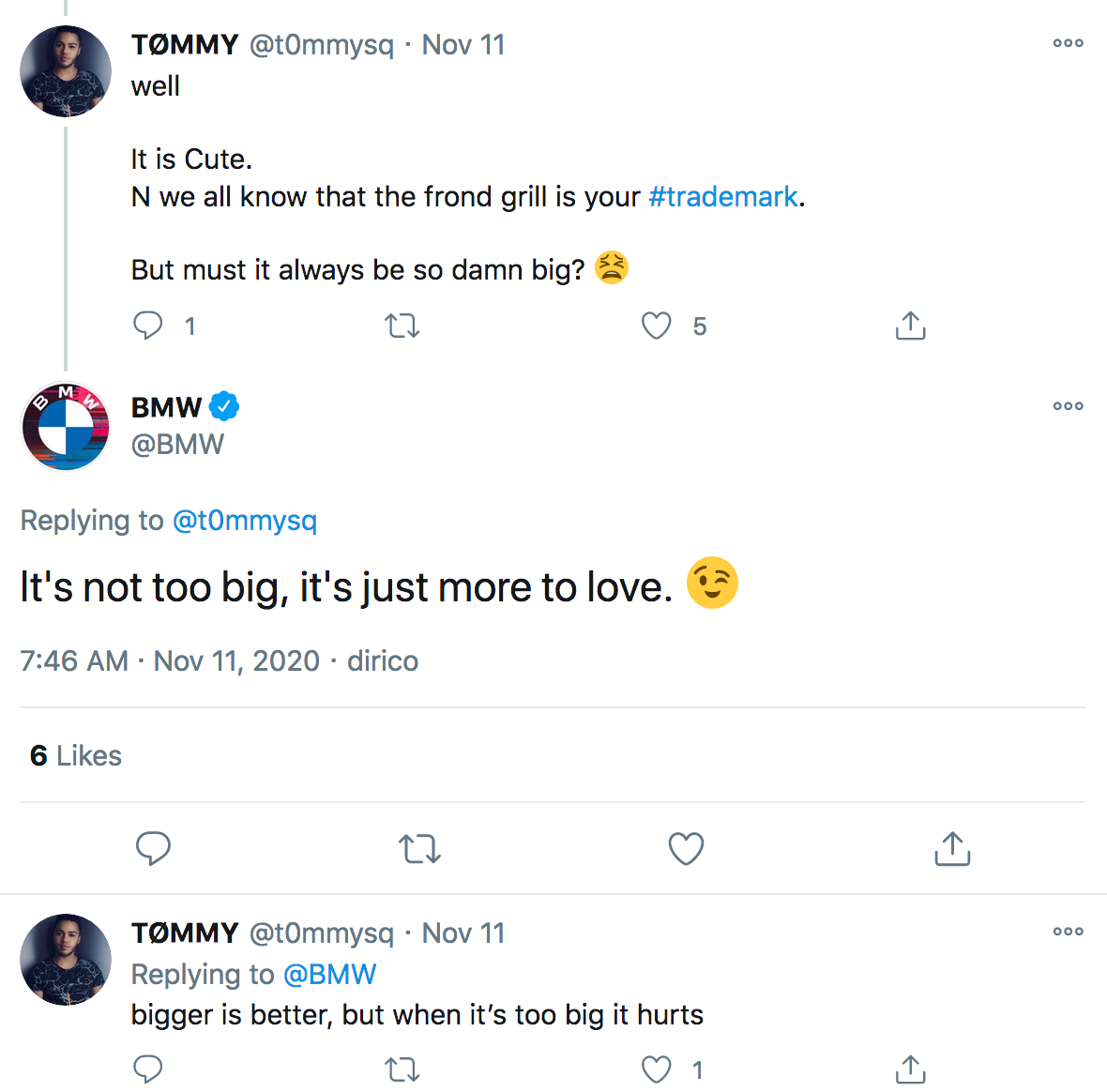 TWEET THROUGH IT, BMW! Because that always works! </sarcasm>

I get it: Defending BMW is their job, and I don’t envy that one right now. I also chuckled at a couple of these replies, like claiming that the grille was just “more to love.” Goodness knows, I’ve spent plenty of times sticking up for places I’ve written for online, too, but I also don’t write off those critics as stuck in the past or wrong, either.

This whole campaign also repeatedly misses the point that a lot of critics have about their latest cars when it frames some of the “not a BMW”-type comments around electrification. It’s not the electrification that’s the issue for a lot of t3H HaTeRzZz. There will always be EV haters out there, but for the rest of us, the technical specs of a 500-horsepower all-electric SUV with a 300-mile range are damn impressive. The big beef that electric and internal combustion fans can both share a pretzel over—and what many of these ads’ comments probably refer to—is that BMW’s new cars aren’t pretty.

New chief designer Adrian van Hooydonk completely ignored many of BMW’s classic design cues when he designed 3 and 4 series cars that look depressingly generic beyond the silly bucktooth grille. The iX continues those mistakes, dropping the uniquely BMW whimsy of the i3 and i8 for an SUV that looks like a cross between a Lexus RX and a rodent of unusual size.

Fortunately, BMW is a little clearer when responding to design-specific questions on its landing page for the iX, even telling us, “We don’t wish to shut down your criticism. Instead we want to meet you in dialogue. That’s how we achieve a new level of transparency. Together.”

Yet the same page also makes it clear that the problem must be us, leading off with:

You will always have plenty of reasons to change.

But the truth is: It’s always easier to find a reason not to. It might not be the best time for you right now, or perhaps you find yourself in the wrong place. You might think that technology still hasn’t reached its peak, or that the design looks strange.﻿

So, are you listening or not, BMW? I’m sure I can find some recs for couples’ counseling if we’re just going to be in this weird impasse forever. After all, your motorcycle side just showed that you can design a futuristic electric vehicle that’s actually gorgeous.