Welcome back to another installment of Corvette Week, this time looking at the fifth generation Corvette, in production from 1997 to 2004. We start off neck-deep in the 1990s, a time when tech was rapidly reaching new heights. GM’s answer was the C5 Corvette. The project didn’t start out on a high note, however. At the time, GM was going through financial trouble and an internal power struggle. When a company is in survival mode, the last thing the accountants and shareholders want is to spend millions on a niche-segment sports car. Some wanted to kill the ‘Vette entirely, some wanted it to be under a different GM brand, and others thought it should stay. However, after power changed hands to Jack Smith, the C5 development was green lit.

The corporate turmoil filtered down to the Corvette program as well. Many of those who had worked on the C4 moved on to other things, and the department was experiencing big turnovers. Wayne Cherry, more of a business man than a designer, became the new head of design for the Corvette, but it was the head of the Chevy III design studio, Jerry Palmer, who directly influenced the outcome of the C5s design. John Carafo came over from the Camaro program to directly manage the C5’s development. The early renderings he created for the C5 didn’t stick with the big wigs, so they solicited the help of GM designer Tom Peters and third-party design firm, ACC. In the end, Peters’ designs were chosen and combined with many of Carafo’s ideas. What resulted was a car similar in ideology to the C4’s “bird cage” structure with an updated look. 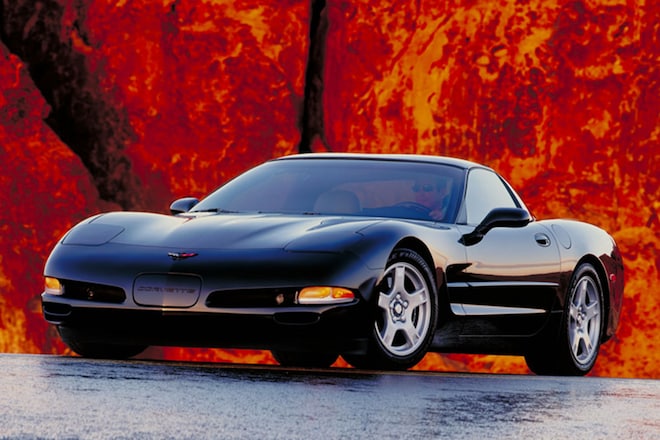 By the end of 1992, a prototype C5 known as the CERV IV (Corvette Engineering Research Vehicle number four) had been secretly completed by TDM Inc. The car was outsourced as opposed to being built in-house, mainly to protect it from being axed altogether, and it cost less money. Despite the secrecy, GM’s suits loved the car, and after a shifting of more designed executives, the car was slated to debut in 1997.

The C5 sparked big changes to the way GM marketed their cars. For the first time, they conducted market-research to seek out what the people wanted. Surveys were circulated to past and present Corvette owners, as well as owners of other manufacturers’ sports cars, asking what they wanted out of the new ‘Vette. The results of these surveys would be the navigation system for the C5s development process. 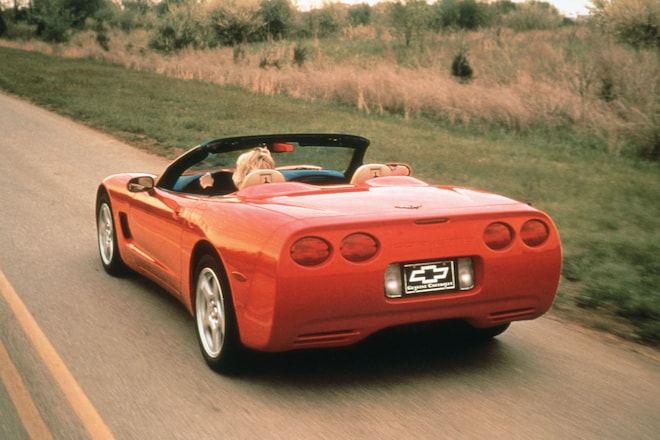 Quality construction, performance and safety were the top three desires among those who had taken the surveys. They also didn’t want the Corvette to look like a Ferrari or NSX. For GM executives, having consumers tell them what they wanted was a dream come true, but it heavily constricted the designer’s creative freedom, as they were now making a car for the people. Gone were notions of tiny, light cars with high-output six-cylinder engines, thankfully. Progress on the C5 surged forward with test mules ready to hit the road in 1994. For the next three years, engineers and designers would work out the kinks to produce a car that blew the doors off anything before it. This was a new car.

Yes, we’ve said that the C4 was a total redesigned of the platform, yet it retained a good number of components from past Corvettes, as well as other cars in Chevy’s lineup at the time. The C5 was a totally new design that had 1,500 fewer parts than the C4, and of those that remained, few were shared with the previous cars. The perimeter frame for example was constructed of single-piece, hydroformed steel tubes that were packed in balsawood-based insulation to quite road-noise- that was entirely new. 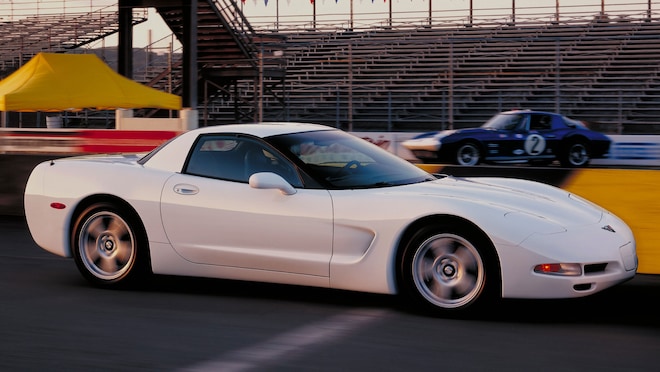 The wheelbase was eight-inches longer and track width increased four and two-inches in the front and rear respectively. With the wheels pushed further to the car’s corners, the laid-over windshield, and diving nose, the C5 looked faster than ever. It didn’t just look the part; it owned the part. Two suspension options were available early on, the track-ready Z-51 package and an active, selectable option with which the driver could tailor the car’s response to their preference. New vented disk brakes and aluminum calipers stopped the car from 60mph in an eye-popping 125ft.

We’ve held out long enough, now let’s get to the engine. The C5, along with the Camaros and GTOs of the time, received the first of the many generations of the iconic LS V8, specifically the LS1. The 5.7L titan was and is to this day one of the most robust and modular powerplants. In the C5, it made 345hp and, when coupled with the rest of the car’s performance, made it one of the fastest production Corvettes of all time (the C4 ZR-1 had the top spot) and one of the fastest cars in the world. The rear-mounted transaxle and weight-saving practices like no spare tire or jack, contributed to a near-perfect 51-49 weight distribution, while an aluminum torque-tube passed through the chassis’ central tunnel, which doubled as the backbone for the whole car. 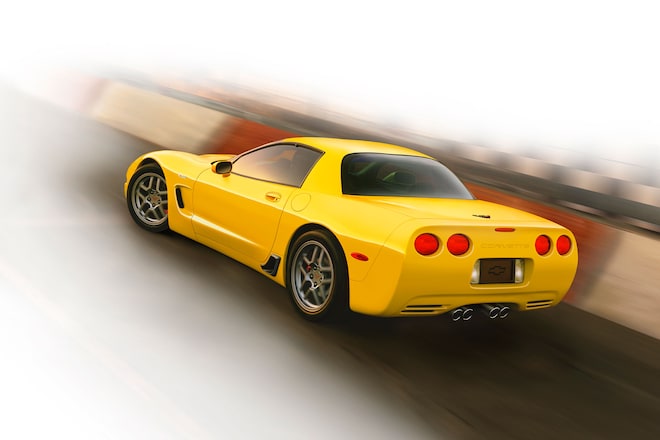 Just as with the C4, there were several special editions of the C5, like the Le Mans Commemorative Edition and the Indy 500 Pace Car. The most notable special edition was the ZO6. The badge made its return after a 40-plus year hiatus in 2001. It effectively replaced the ZR-1 and out-performed it in every way minus top speed. It did so with the FE4 suspension designation and the LS1 (which was dubbed the LS6 when in the ZO6) cranked up to 385hp. A six-speed manual was the only transmission option available to send the power out to the wider wheels and tires and only came with a fixed-roof. Weight saving was key, so a titanium exhaust was installed, along with thinner glass and less sound deadening materials, to name a few. In 2002, the engine got a bump in power to 405hp.

It’s not a stretch to say that this car was groundbreaking. For almost half the cost of its European counterparts, the Corvette was cementing itself as a true force to be reckoned with in the high-performance production car segment. These cars lost their fame for a little while; however, they’ve now emerged as a killer, budget level performance machine. Better hurry and get your hands on one before they start becoming collector’s items! 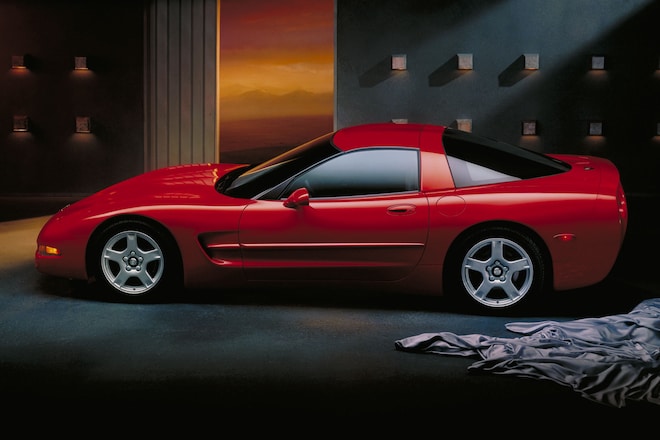 We’re sending you into the weekend with two more generations to come! Stay tuned right here for the final chapters of Corvette Week and if you’ve missed out on the previous years, click the links below! If you’re the proud owner of a Vette share it with us on our social media!