Racing games—especially simulators, if you lump them in the same camp—take themselves pretty seriously these days. If you’re not shaving tenths off your lap times then you aren’t getting the most out of Gran Turismo or Project Cars. It’s become such a focus to learn the arts of trail braking and heel-toe downshifting on expensive sim rigs that arcade-like antics have almost been left behind, save for maybe the Forza Horizon series. Well, Dirt 5 is here to pad those numbers with thrills you’d expect more from a Dave and Buster’s cabinet than a next-gen console.

It’s not just the fast and loose gameplay that makes it that way, either. Dirt 5 has an aesthetic that’s supported mainly by bright colors and beautiful artwork for each track, game mode and menu option. The targeted feel is clear right from the start when you launch the game and Donut Media‘s James Pumphrey greets you with the goofy jokes he’s both loved and hated for. If you’re a fan of commentary packed with internet slang and “HRSPRS” jokes, then you’ll love it. If not, well…enjoy the punk and alt-rock soundtrack. 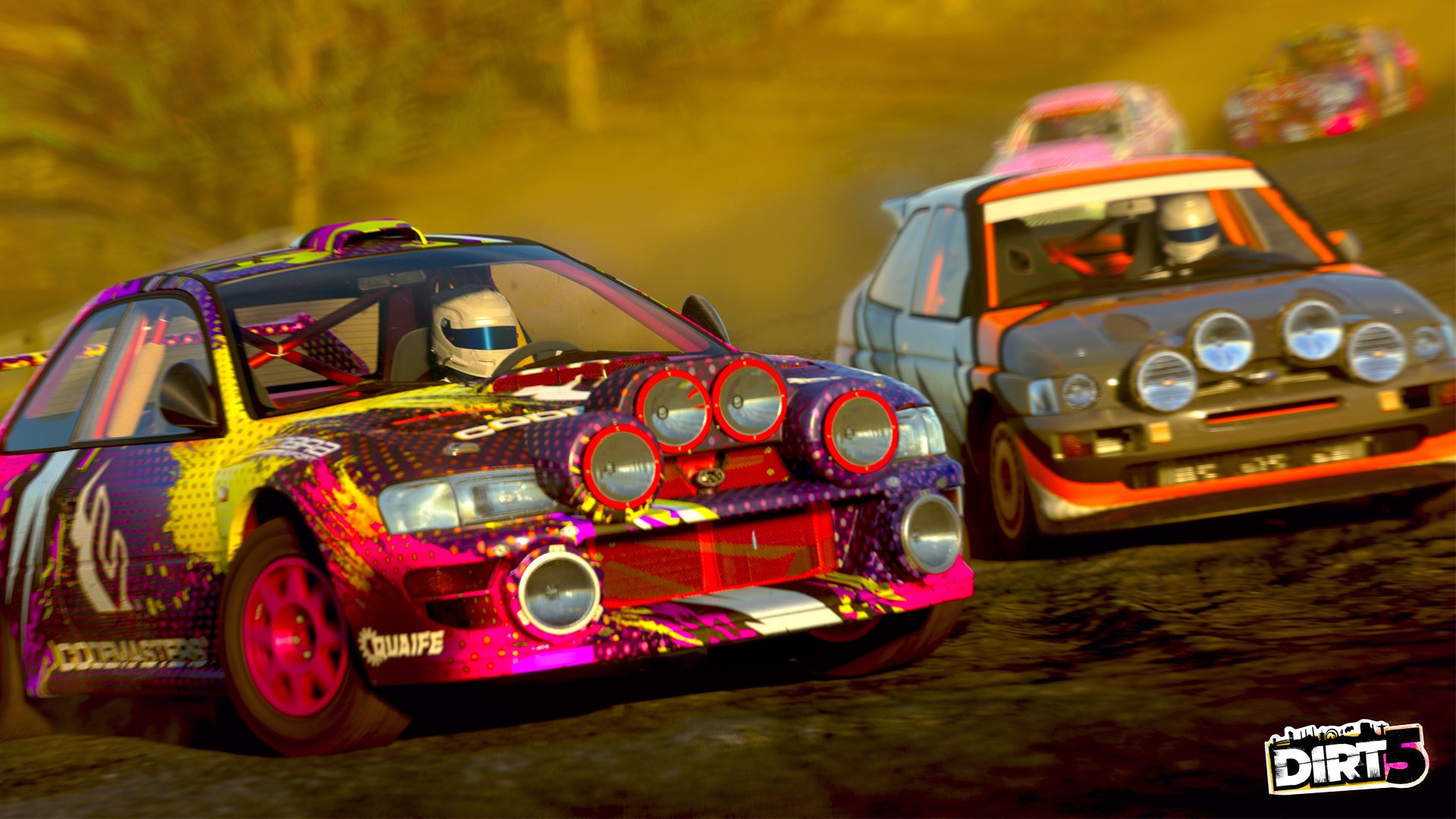 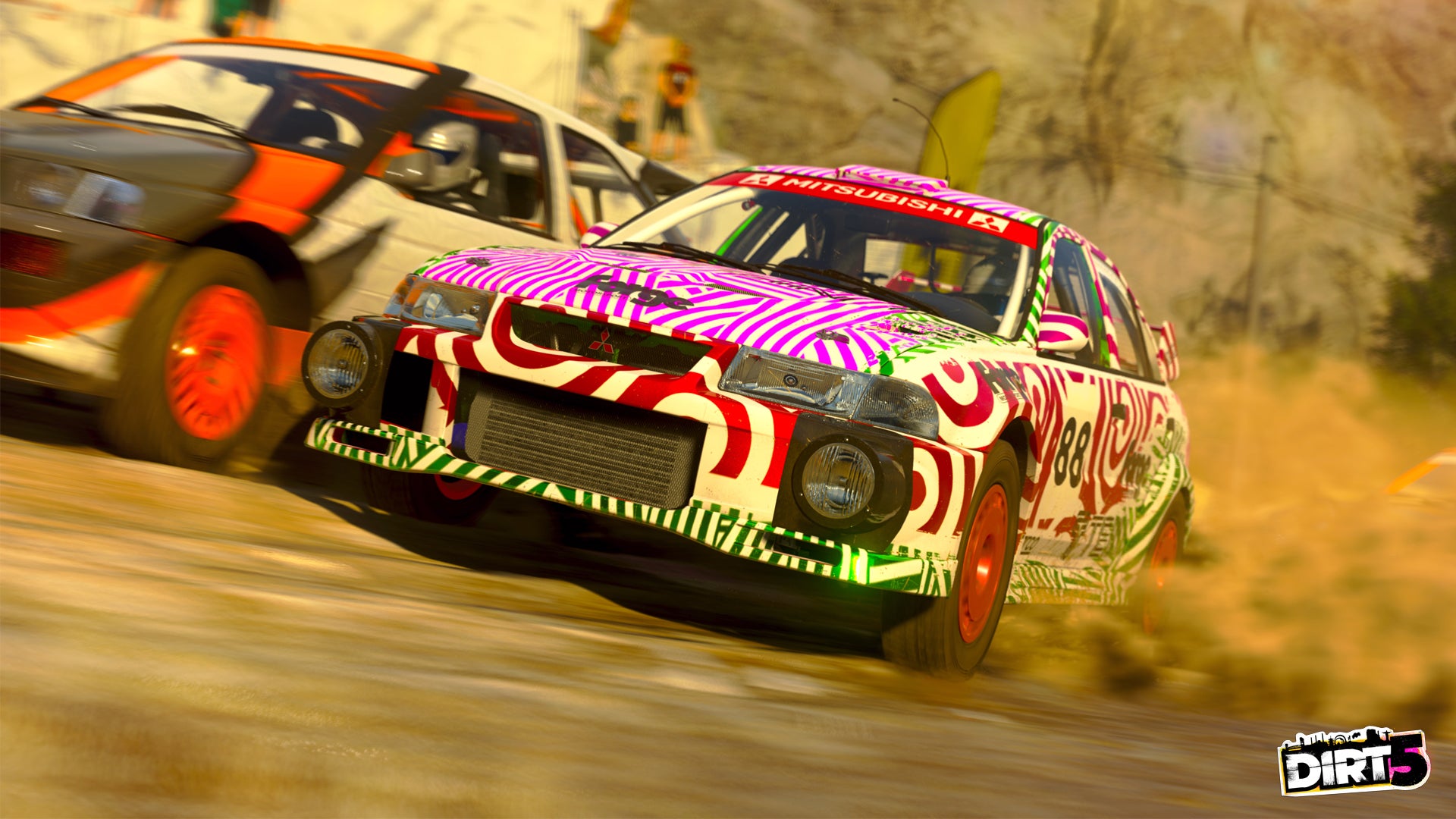 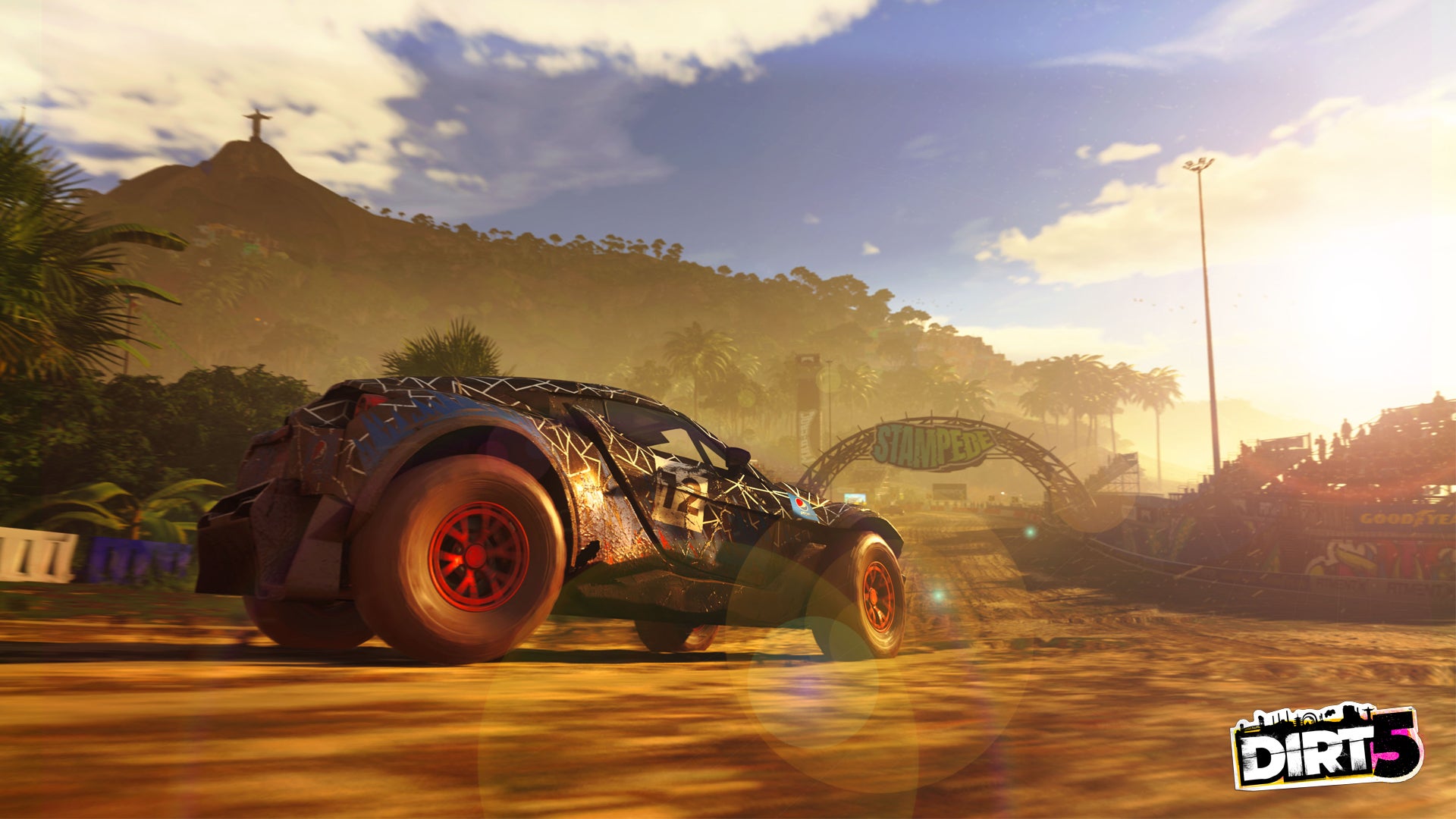 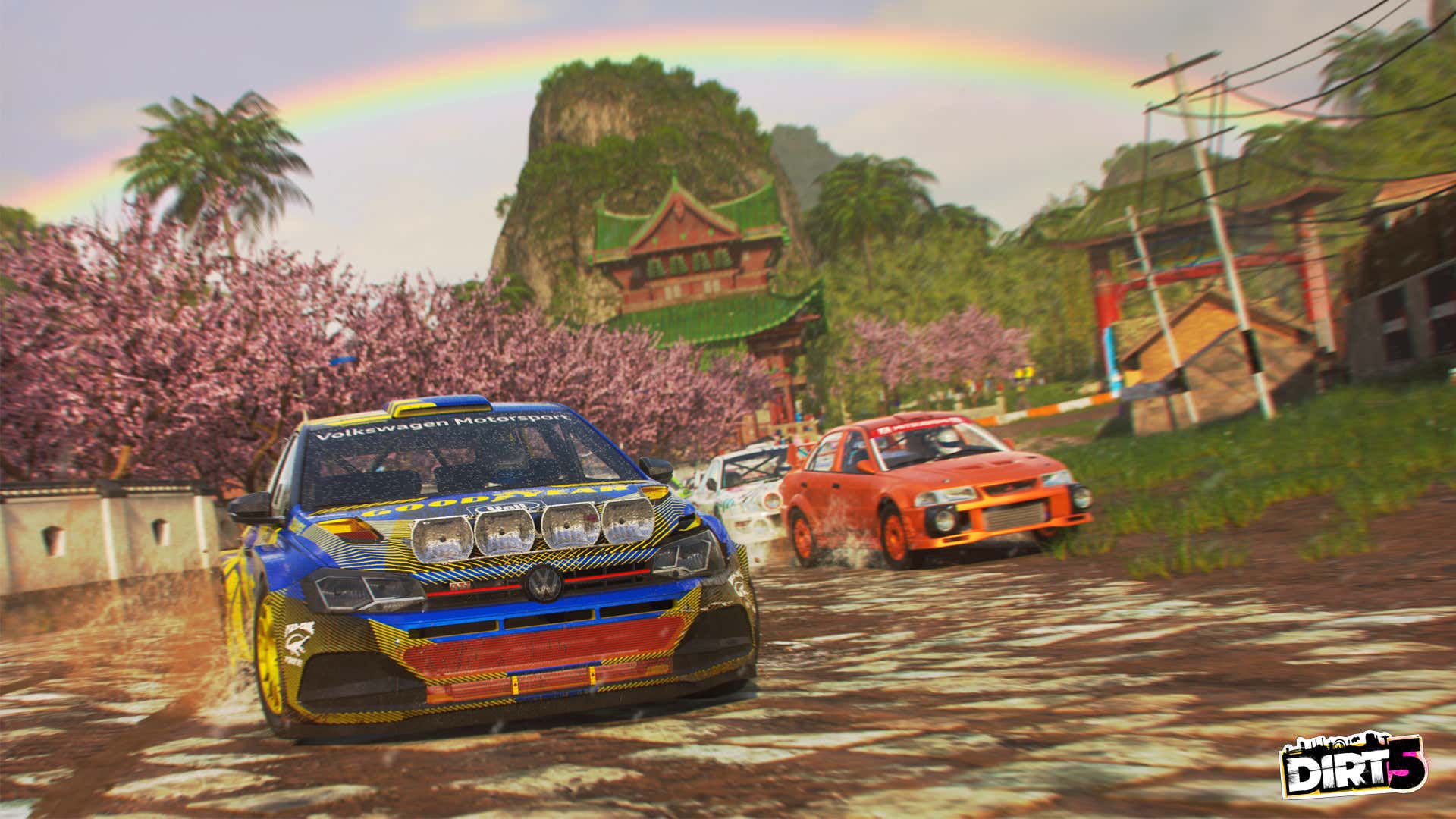 As in previous Dirt titles, there’s a huge selection of cars and trucks meant for slinging gravel, mud, sand and snow. Thanks to the exaggerated weather dynamics, it feels like you might see the latter two in the same stage depending on the day. Unless you toggle the weather settings before the race, then you’re sure to see a mix of conditions that may or may not seem realistic. Like I said, it has a classic arcade feel.

Driving characteristics do indeed change with each car—for example, an all-wheel-drive VW Polo’s bound to behave differently on each terrain than a front-wheel-drive Peugeot 306 Maxi. That’s not to say the cars are predictable; I mean, is that what you really want from a game that’s just short of Cruis’n USA? Instead, to really nail a series of turns on a loose surface—which I have not—you’ve got to adapt to Dirt 5‘s style.

This is manageable when you’re playing Rally Raid events, but much, much harder when driving more technical Playground courses like in the fan-favorite Gymkhana mode. I can’t drive up those tight, twisty ramps to save my life, especially with my controller. Maybe that’s the point; if you want to squeeze the max potential out of it, you really need a wheel and pedals. Otherwise, you might drive yourself crazy instead of successfully through an asphalt maze. 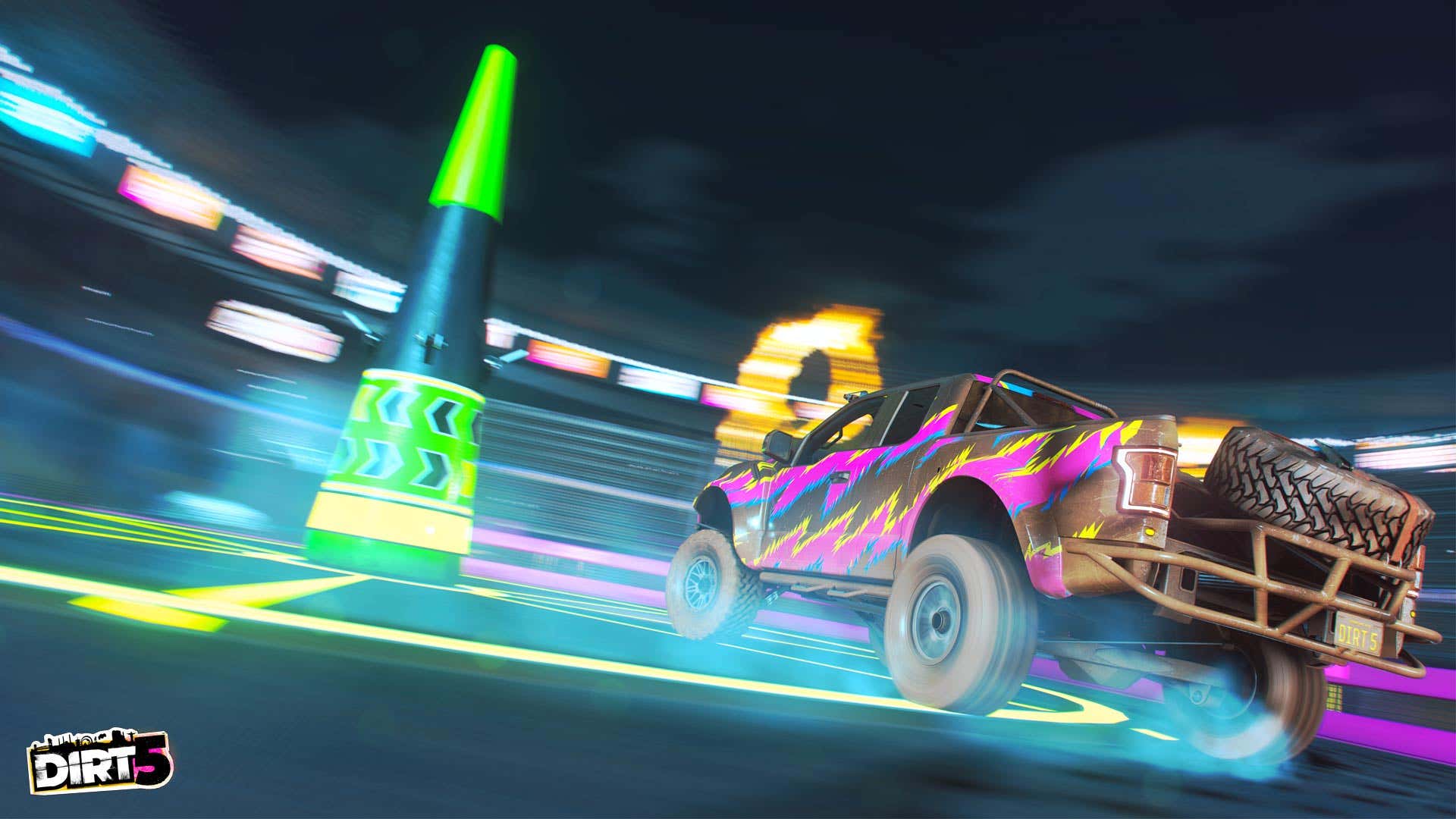 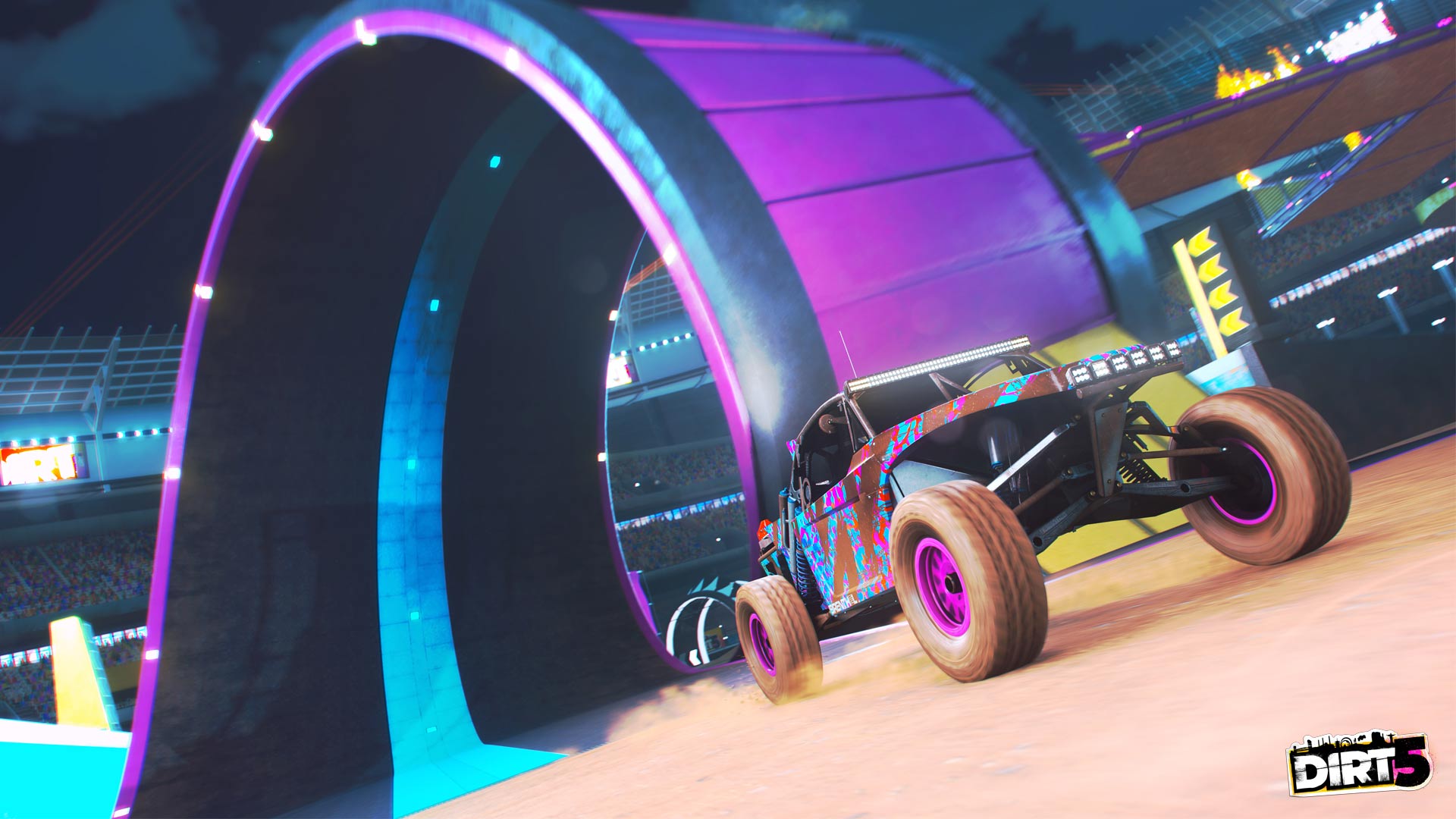 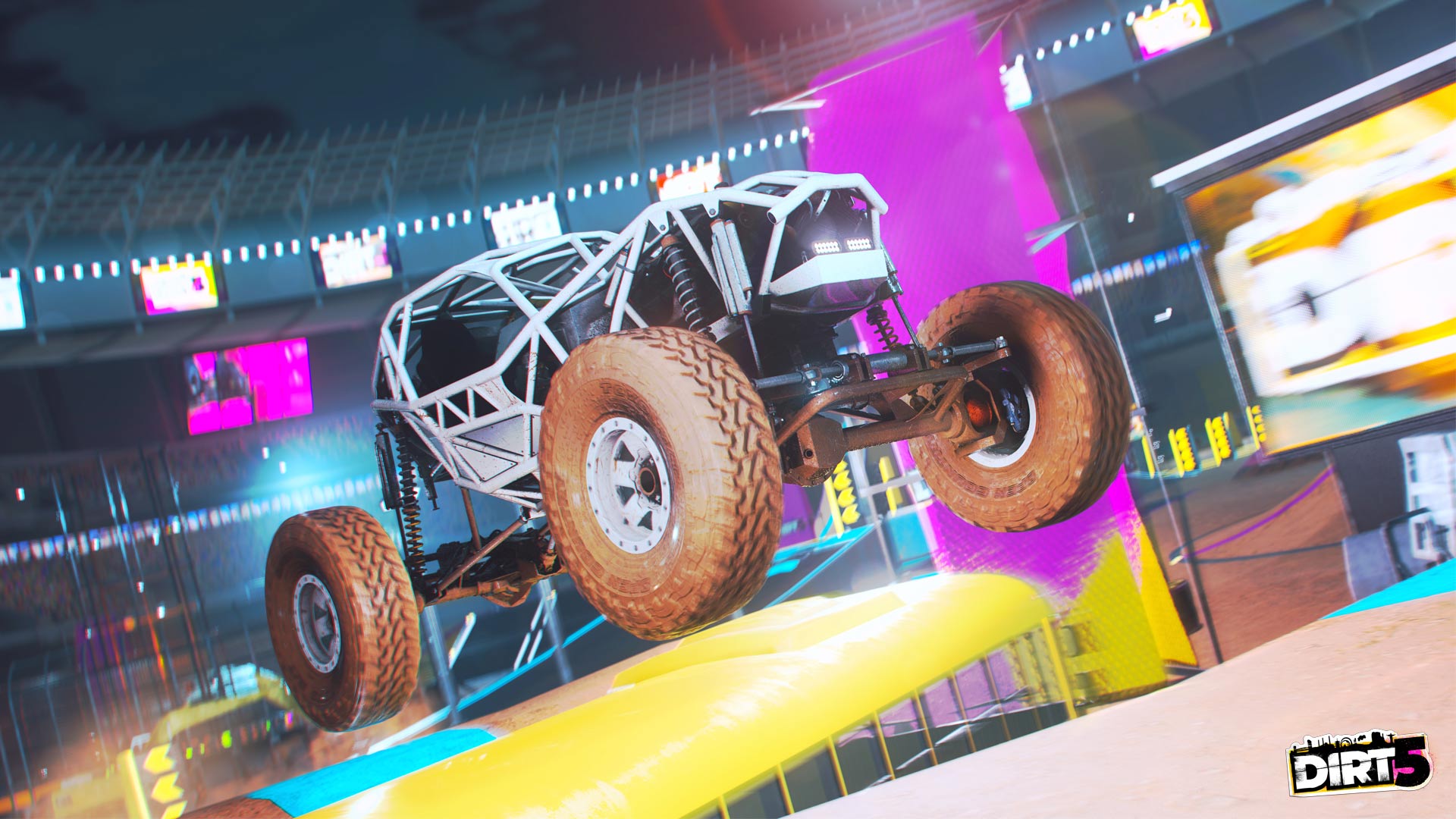 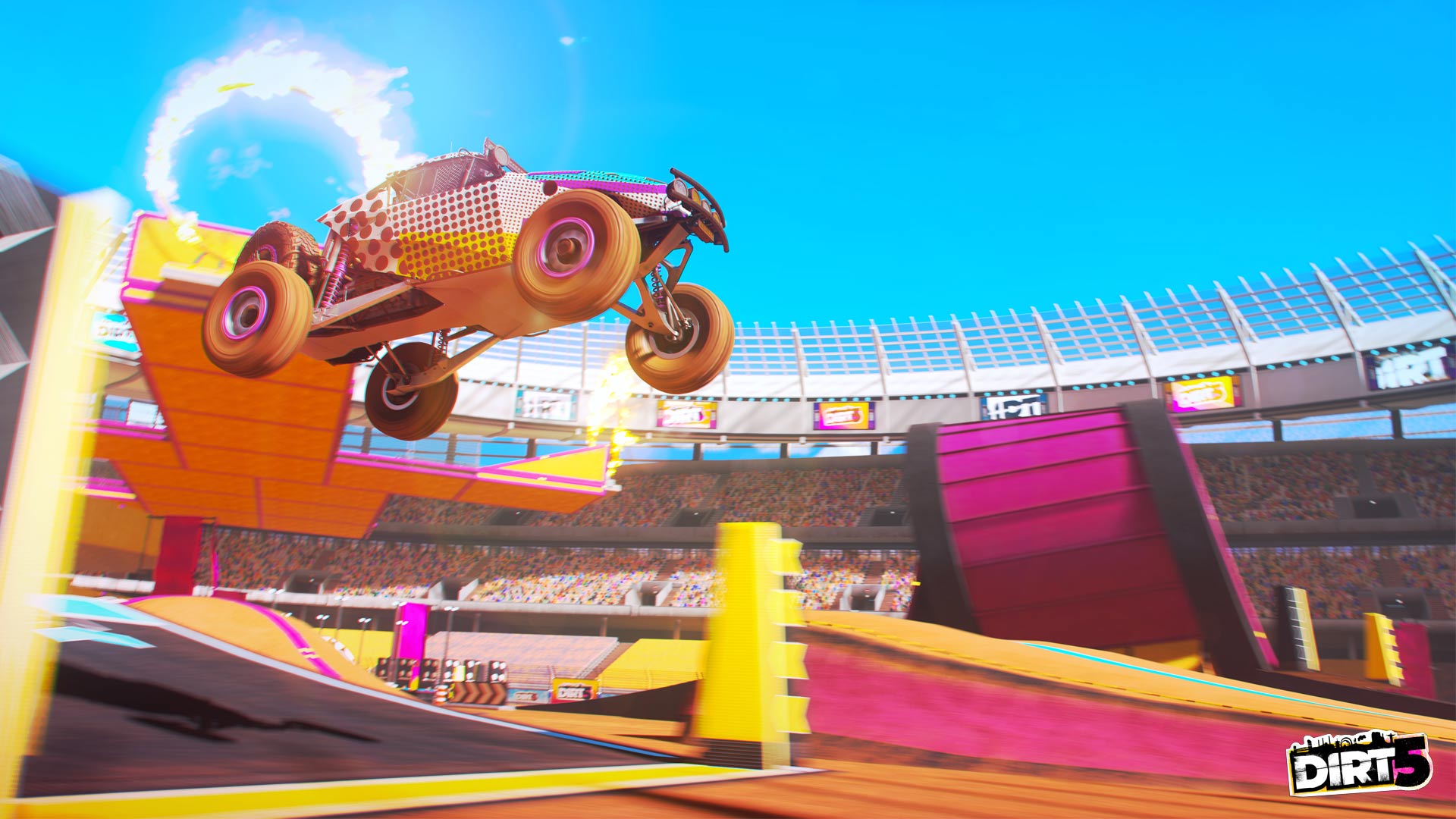 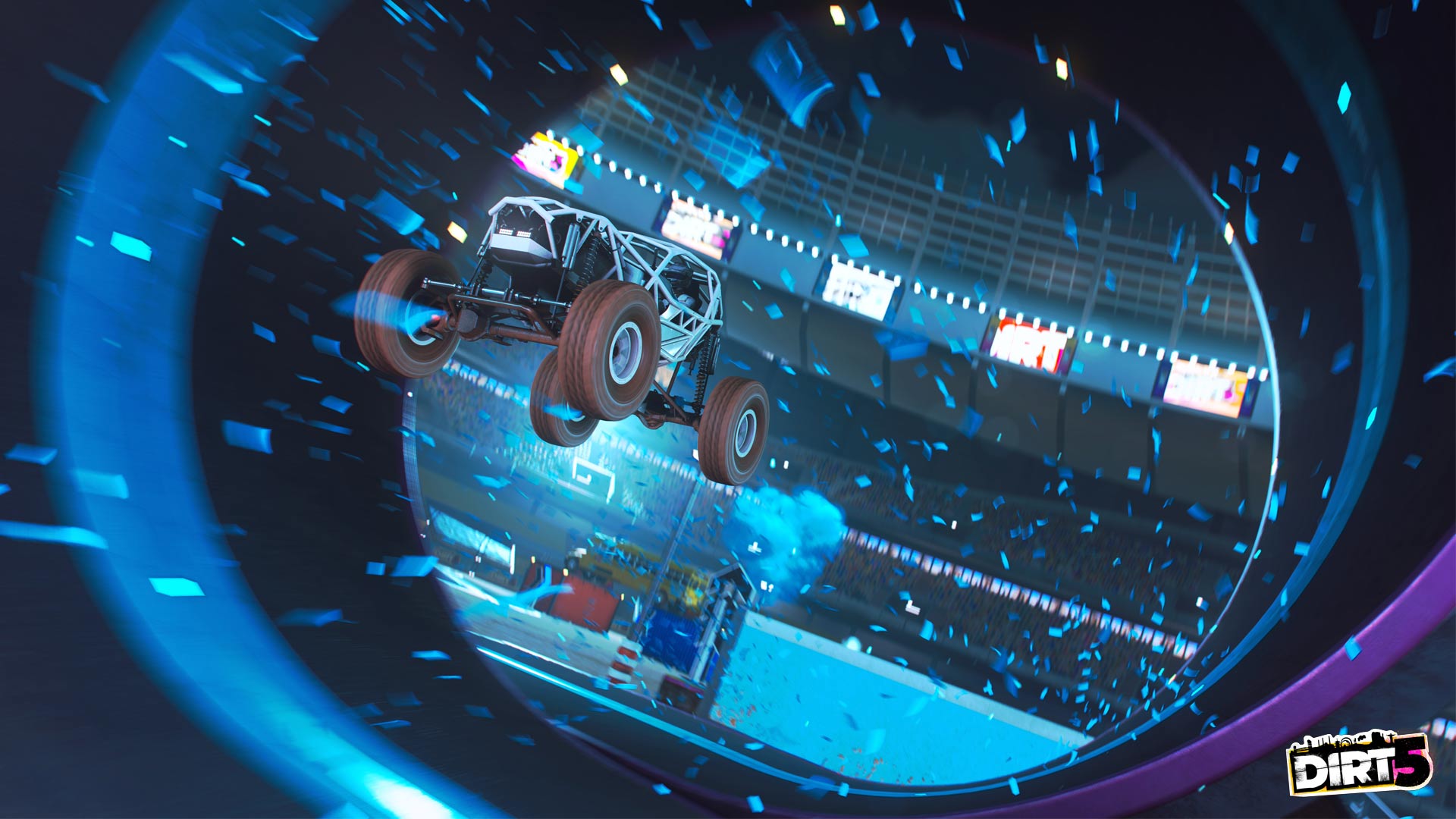 As you can tell from the attached screengrabs, the graphics are perfectly fine when running as intended. That said, and perhaps this can be attributed to playing a pre-release version, that’s not always the case. Every race was slightly laggy from the start on the Xbox One, no matter if I chose to optimize frame rate or screen quality when the game asked my preference. Additionally, there were some textures that didn’t properly load and it seemed buggy, sometimes affecting gameplay. Patches will surely fix this but, as of right now, it’s something to keep in mind.

The career mode is pleasantly straightforward: You compete in one event and move on to the next, acquiring XP and a little bit of loot along the way. This allows you to earn each car rather than simply picking it from a carousel screen. Also, another nice tidbit—Dirt 5 shows real power and weight figures for each vehicle rather than just a letter-grade rating. It has that, too, but doesn’t leave out the specifics for car nerds who care. Whether or not those minute stat differences actually play out as advertised on the track is a different story. 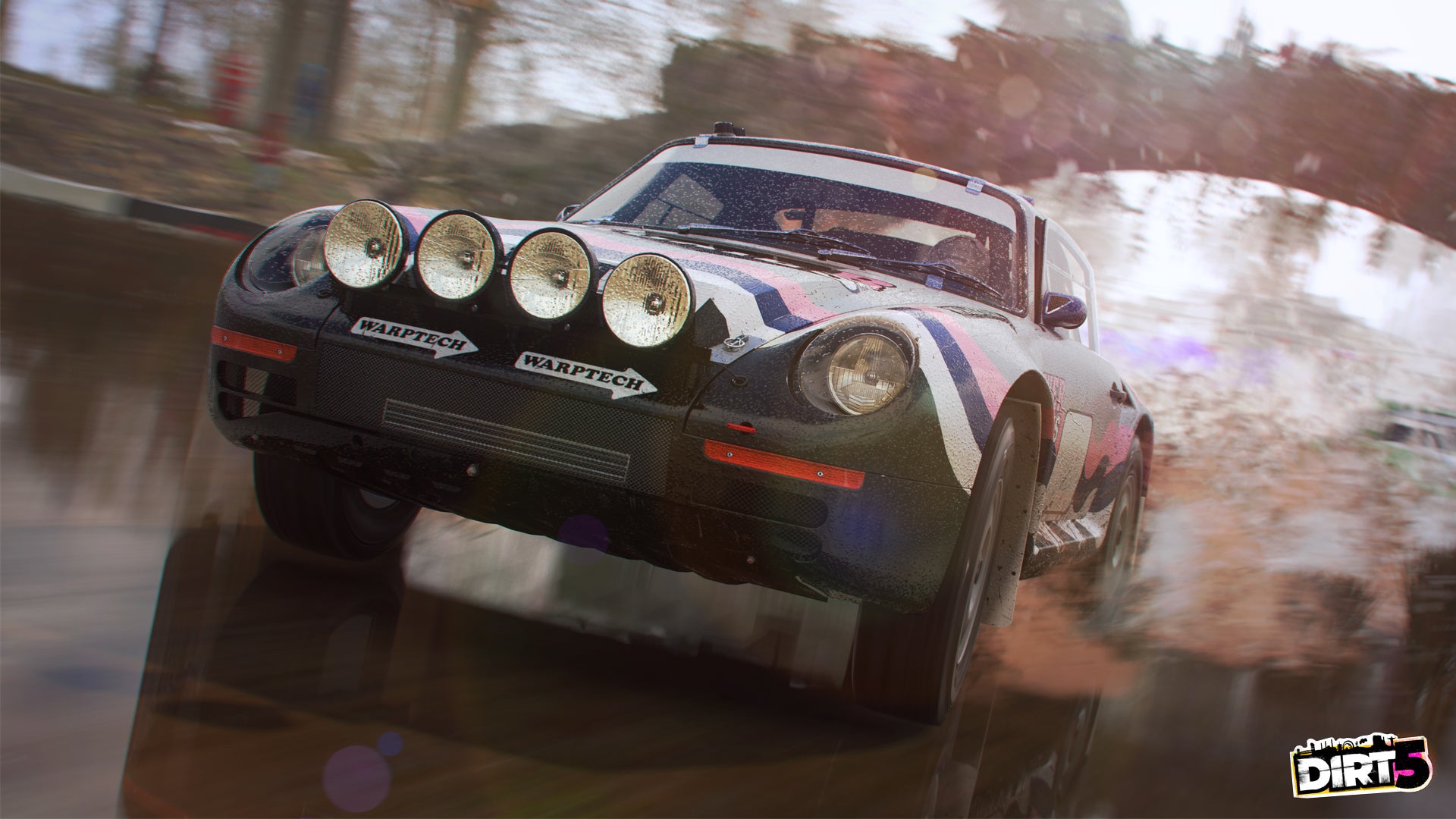 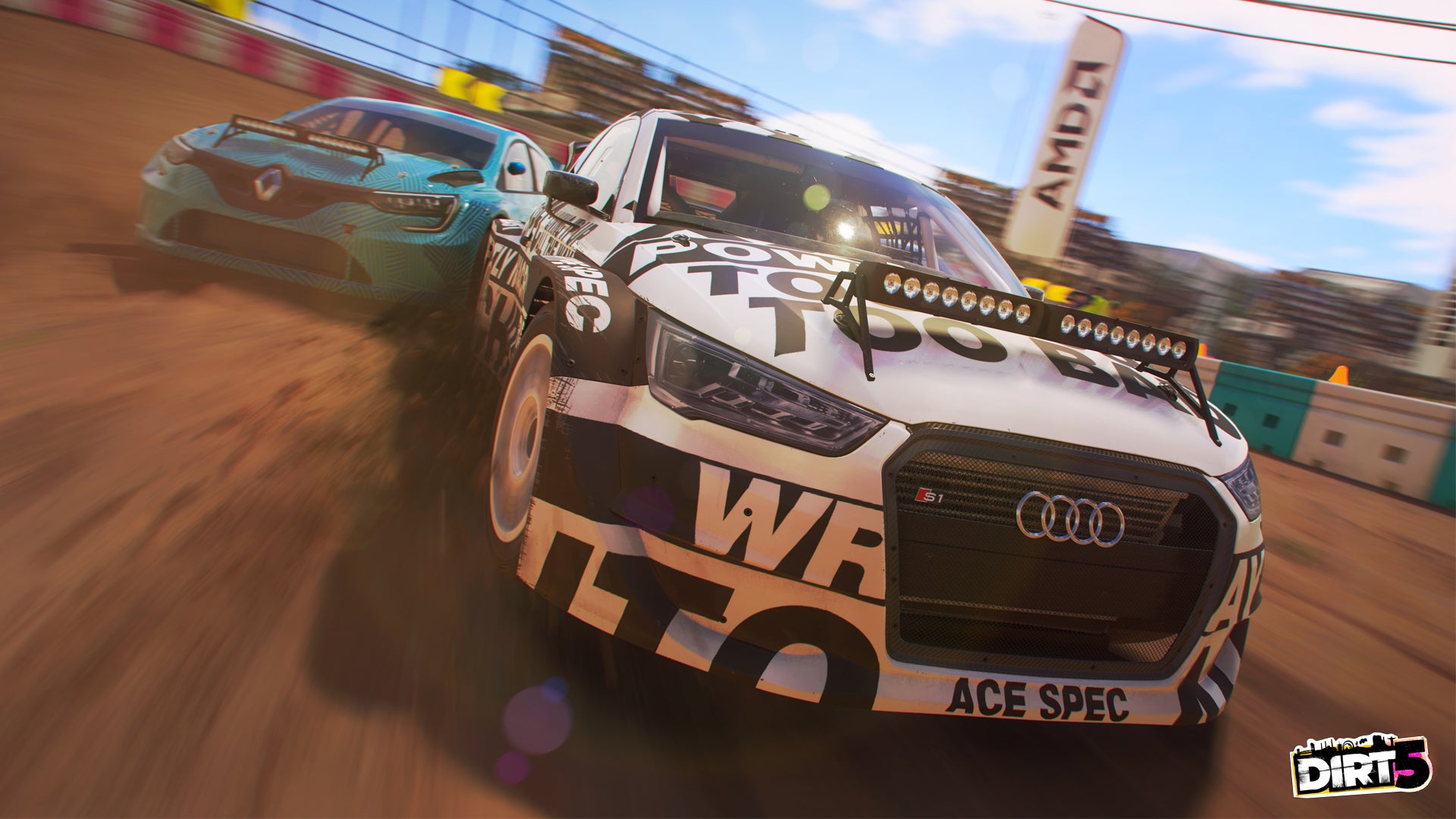 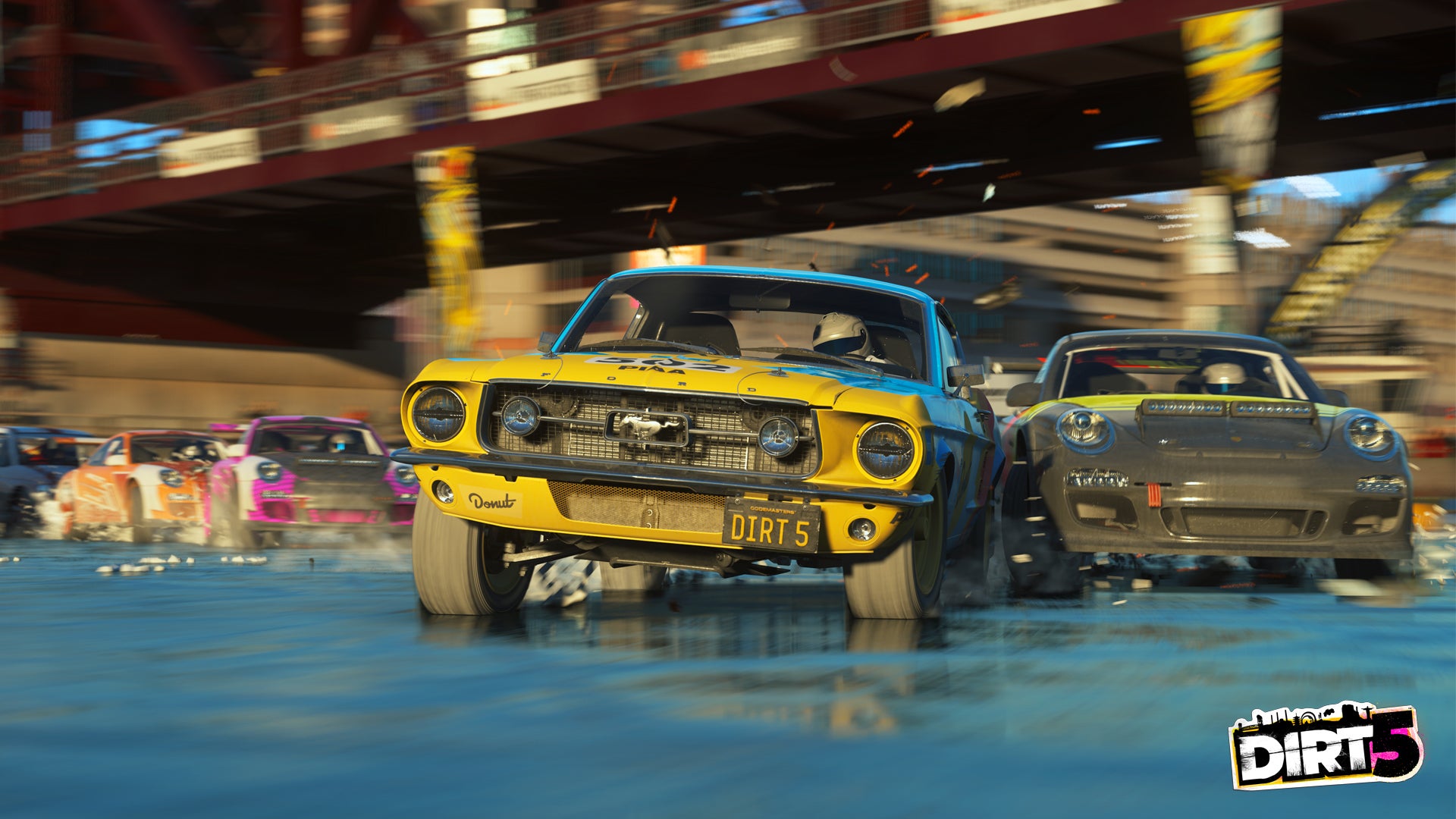 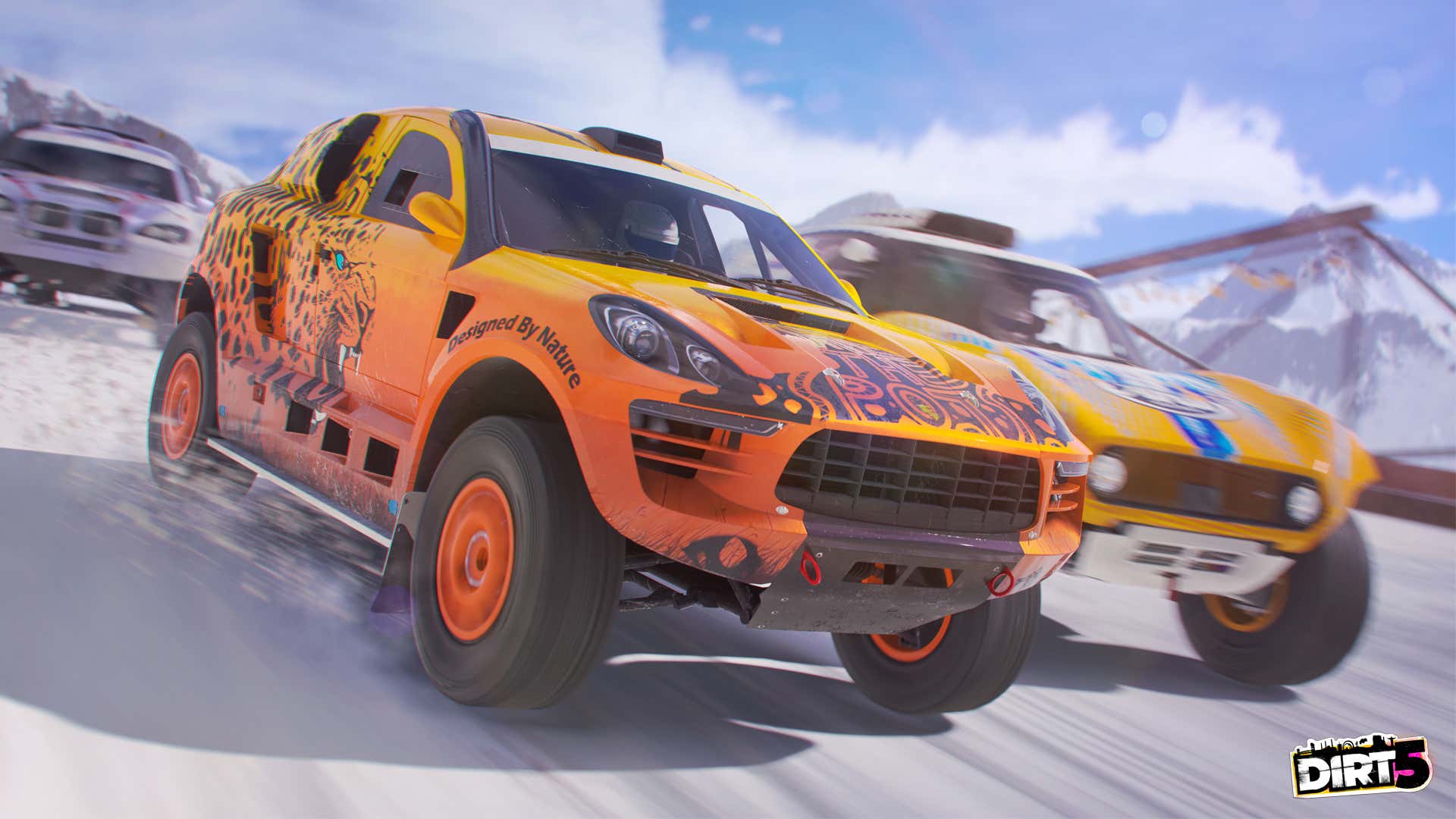 I know this is a Macan, but I promise, Stef—they do have the Cayenne Transsyberia.

Real race cars aren’t lacking here, as there are multiple categories with different flavors for everyone: Classic Rally, ’80s Rally, ’90s Rally, Cross Raid, Formula Off-Road, Modern Rally, Pre-Runners, Rally Cross, Rally GT, Rock Bouncers, Sprint, Superlites and Unlimited. Phew! Each one contains the machines you want to drive, like the Group B Lancia 037 or a Liam Doran-esque Citroen DS3. If you’re a fan of trucks, the game has those too with Ford Raptors and sand buggies all the same. Consider the lineup a high mark for this title as a good deal of thought was put in by a Codemasters team who certainly knows rally.

And again, if you want a true-blue sim, or even something approaching that level of bracing realism, there are other options out there. Heck, try Dirt Rally 2.0 from 2019 if you want stage-by-stage competition. That was never the intended focus for Dirt 5, which dishes out achievements for airtime and rewards you for overtaking your opponents while pulling off sick drifts. Just don’t expect any tickets to exchange for a plastic parachute Army man.

Dirt 5 is out on Playstation 4, Xbox One and PC starting today. It’ll also be available on next-gen consoles like the Playstation 5 and Xbox Series X at launch. Folks who buy Dirt 5 for the outgoing generation of consoles will receive a free upgrade that’s compatible with their next-gen systems.