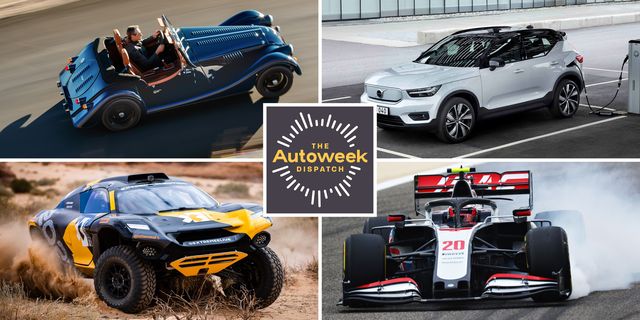 Oodles of car-enthusiast stuff going on. Let’s get straight to it. Here’s what’s happening in the car world:

FROM THE EDITOR’S DESK

Way back in March, at the beginning of COVID-19, we did a story on the Morgan Motor Co., the tiny U.K. outlet that cranks out about 800 cars per year. The story asked the question, are Morgans really made of wood, as legend has long had it?

Here’s another question: When, if ever, will Morgan once again offer a four-wheeled car in the U.S.? The question popped into our heads when the FAST Act, or Fixing America’s Surface Transportation Act, came up in conversation the other day. That was passed way back in 2015. The act said the National Highway Traffic Safety Administration had until December 2016 to write rules allowing boutique carmakers — such as Morgan — to start selling their cool cars here. But NHTSA hasn’t done that yet (no surprise), so last year SEMA sued NHTSA. As this is being written NHTSA and SEMA are still haggling, and NHTSA claims the ruling will be complete in January.

Meanwhile our man in Europe, Mike Duff, dug up some updates at Morgan and filed the following report:

Things happen slowly at Morgan. The English sports-car maker has been doing things its way since its founding in 1910, and staying well away from fashion has proved a successful strategy for most of that time: The 1950 Plus 4 was only retired earlier this year.

Although the company has sold cars in the U.S. at various stages of its long history, it hasn’t offered any four-wheeled products since the expiration of the smart airbag exemption allowing small numbers of its V8-powered Aero 8 to be imported. Morgan recently announced the retirement of its Edwardian trike that is the Morgan 3 Wheeler. It was sold as a motorcycle in some states, and it now means the company’s U.S. dealers are facing a fallow time.

It wasn’t meant to be like this. Morgan wants to bring its two spiffy new models — the BMW-powered Plus Four and Plus Six — to the States under the aforementioned FAST Act. It included a clause allowing replica cars resembling production vehicles made at least 25 years ago to be sold without the huge expense of full federal approval. But Morgan, too, is waiting on NHTSA to implement the clause. So even though Morgan’s new cars were designed with the rule in mind, they can’t come in.

“It’s challenging, to say the least, because this has now been going on since 2016,” Morgan managing director Steve Morris told Autoweek. “And I think that with a new administration coming in it’s likely that replica cars aren’t going to be the No. 1 priority.”

The FAST Act allows a maker to sell up to 325 replicas a year, which could be a huge boost for Morgan — with total production of 850 cars last year.

“Our dealers in the U.S. are obviously keen to expand the proposition, so it’s been really tricky for those guys,” Morris told us. “Anything that we do — any announcements that we make — the U.S. is always the biggest market from a numbers point of view. There’s still huge interest in Morgan in the States.

“The opportunities are obviously significant for us, which is why we’re putting huge effort in the background,” Morris said. “We can’t influence the external factors, but we’re doing everything we can internally in preparation. So if and when it happens, we’ll be ready.”

There is some good news, though. Although today’s 3 Wheeler is retiring, largely because its U.S.-built S&S V-twin engine can’t meet European emissions standards, Morris confirms that the trike’s replacement — with an emissions-compliant engine — is definitely coming to the U.S.: “The next-generation 3 Wheeler is a fantastic opportunity for us and something that we look to expand on in terms of the excitement and experience of the previous one,” he told us.

So look forward to the next Morgan 3 Wheeler, but also keep your fingers crossed it gets joined by some four-wheeled sisters.

Volvo CEO Håkan Samuelsson says it’s possible the automaker he runs could be EVs only by 2030. “I would be surprised if we wouldn’t deliver only electric cars from 2030,” Samuelsson said, having previously said the company expects 50% of its car sales will be battery-electric or plug-in hybrid vehicles by 2025. Volvo has also committed to put 1 million electric cars on the road by then.

In some non-EV news, Mercedes-AMG announced that its Nürburgring record-holding 2021 AMG GT Black Series will wear a $327,050 sticker price when the 720-hp* beast goes on sale early next year.

Haas F1 driver Kevin Magnussen, who is losing his Formula 1 ride after four years with the Haas F1 Team at season’s end, is joining Ganassi Racing for a full-time ride in IMSA next year. Magnussen will pilot Ganassi Racing’s Cadillac Daytona Prototype (DPi) car. Magnussen is no stranger to IMSA. His father, Jan, has raced sports cars in the United States for more than 20 years and has two IMSA championships and a pair of American Le Mans Series titles to his credit.

Meanwhile Michael Schumacher’s son Mick has signed with Haas, joining Nikita Mazepin next year. Both Formula 2 drivers signed multiyear agreements. Mazepin’s father, Dmitry, is a billionaire businessman, but the Haas team says he’s not buying the outfit. He tried and failed to buy the Racing Point team last year. “The team isn’t for sale so there’s nothing to buy,” said Haas F1 boss Guenther Steiner. Could someone please remind Steiner that for the right price everything is for sale?

Lewis Hamilton’s positive COVID-19 test is causing some musical chairs leading to the F1 Sakhir Grand Prix on Dec. 6. Mercedes acquired George Russell from the Williams F1 team to temporarily replace Hamilton. Williams is turning to reserve driver Jack Aitken to race in Russell’s place. Russell is in his second year with Williams and has been a part of the Mercedes Junior Program since 2017. No pressure!!!

Or I guess I should say, What We’re Riding In: Former USC offensive coordinator turned Autoweek West Coast Editor Mark Vaughn took a ride in an Extreme E racer. The new all-electric off-road racing series is run by the same group that runs Formula E. Extreme E begins its five-race schedule March 20-21, 2021, in Saudi Arabia. The series hopes to be carbon-negative—that is, reduce its carbon footprint to the point it is cleaning the air instead of polluting it. Fuel cell-juiced batteries power all the cars in the series, and series officials say all the race trucks, TV gear, timing and scoring equipment will be carried around the world on an eco-friendly cargo ship running on a low-sulfur fuel so clean it’s known among ship engineers as “Champagne.” Find out more on how the series works and what Vaughn thought of his ride in this future racer!

I don’t have to remind you that the holidays are right around the corner. So there’s no better time to shop Road & Track’s exclusive line of Live the Drive products and wearables. For a limited time our pals over at R&T are offering their biggest discounts yet on all the R&T Shop products, from long sleeve T-shirts to face masks and more. Gift your loved ones with Road & Track-branded gear this season. Use discount code CYBER25 at checkout to receive free shipping and 25% off your entire order. Hurry, though. The 25% off expires this Sunday at 11:59 p.m. Eastern.

In the latest Quick Spin, our special guest, Road & Track’s Mack Hogan, puts Genesis’ new-for-2021 G80 through its paces and takes you along for a ride. Hogan walks listeners around the G80 and shines a light on its features before bringing you along for a spin in its ultra-quiet cabin. Hogan then elaborates on these attributes with host Wesley Wren in the studio. Tune in here, on Spotify, Apple Podcasts, Stitcher or wherever podcasts are played.

QUOTE OF THE WEEK

“There can be two opinions here, but in the end no one was seriously hurt. We wanted to tell everyone the news as soon as possible — to family, friends, the guys in the team. In my opinion it’s good that the TV people showed it. Yes, the incident was unpleasant, but we were lucky and in the end everything ended fine.”

—Haas team principal Guenther Steiner, explaining why he agrees with F1 repeatedly showing video of Romain Grosjean’s Bahrain Grand Prix crash. Some drivers thought showing the video multiple times was disrespectful to Grosjean, who escaped with burns to the backs of both hands. The FIA said no footage was shown until they knew Grosjean was basically OK.

That’s it for this week. As always we’re on the case this weekend, monitoring and reporting on automakers’ and sanctioning bodies’ latest happenings. We’ll continually update the site, of course — you’ll know what’s happening when we do. Check back often!

Thanks for reading Autoweek and please stay safe.