Last December, I declared schnitzel a better snack for watching the German countryside pass on by than a Big Mac served aboard McDonald’s McTrain. But as I learned when McDonald’s Germany unexpectedly dropped scans of the McTrain’s menu in my inbox, the McTrain already had that covered. It was among several menu options Americans would consider peculiar offerings for the Golden Arches, though before we dig into the dishes themselves, we need to correct the record on that name—McTrain.

Contrary to our speculation, McTrain was no unofficial moniker; it’s printed front and center on the service’s menu. Much of the fare listed on this menu was McD’s fried standbys, such as the Big Mäc (complete with an umlaut), McNuggets, and fries, the latter two of which were prepared in a special slosh-resistant deep fryer. There was a salad option, the crime-worthy kid’s meal complete with a toy, and a short breakfast menu with croissants, a sandwich made from one, and a plate of ham and eggs served with your choice of tea or coffee. 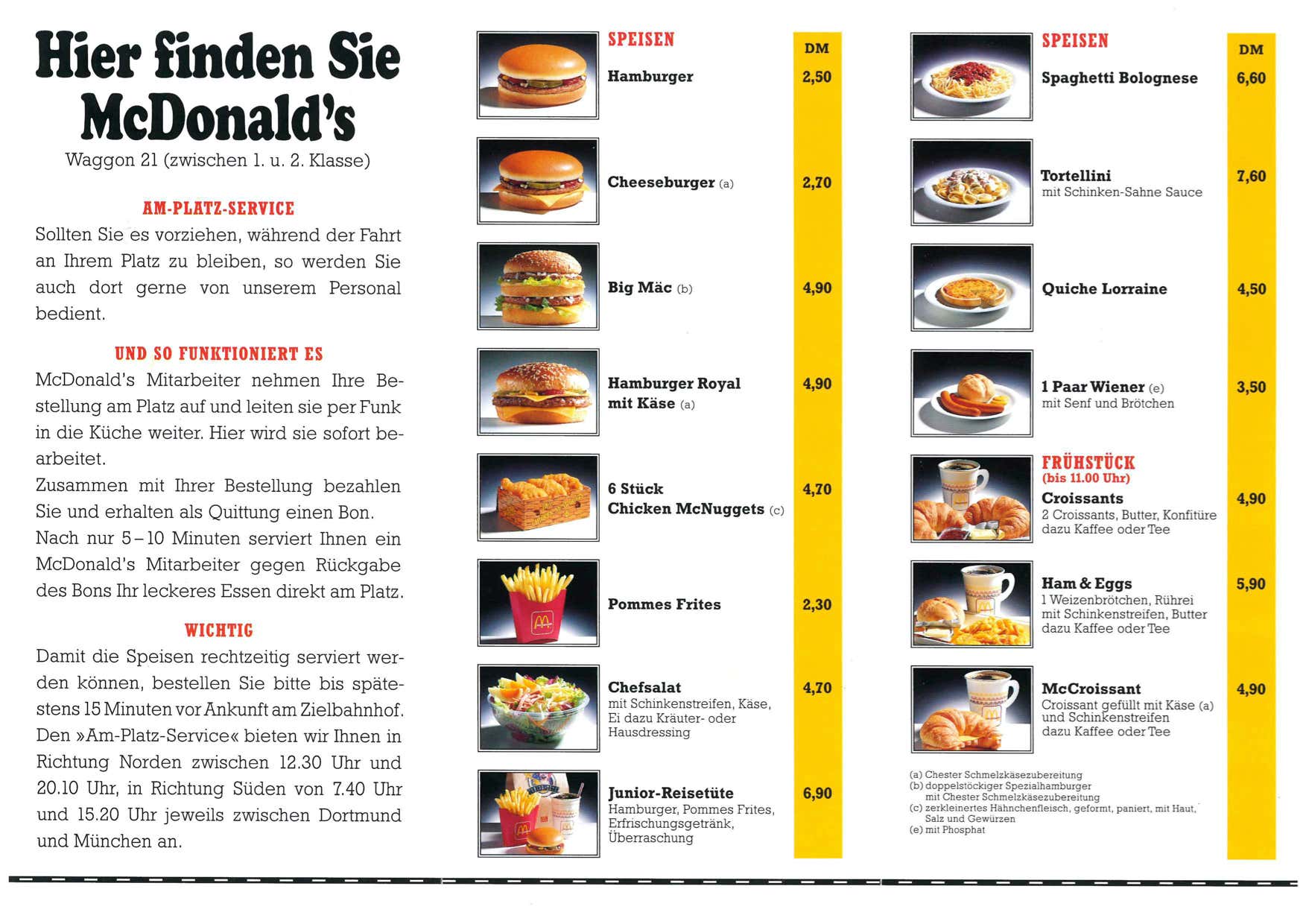 Coffee options were comprised of standard drip, cappuccino or espresso brewed by a single, high-tech automated coffeemaker. Soft drinks consisted of Coca-Cola (normal and diet “Light”) and Fanta, whose distant cousin orange juice served as a healthier alternative alongside whole milk and bottled water. As German McDonald’s are famous for, the McTrain served beer, with a Paulaner Pilsner available to sip with your burger or extinguish a fire. It wasn’t the only alcoholic option, either; the McTrain also served 250-cc bottles of wine, options being a dry Dornfelder red, a Chablis white, and a sparkling Sekt. And these only stand out as the McTrain’s odder menu items.

Just as reported, strange entrees such as Vienna sausage (served with mustard and a roll) and Spaghetti Bolognese were on the menu, but so were some previously undocumented items, like Quiche Lorraine and tortellini in ham-cream sauce. Fancier, more filling options were available in the form of two four-course meals, initially exclusive to first-class passengers, but later available to the whole train. 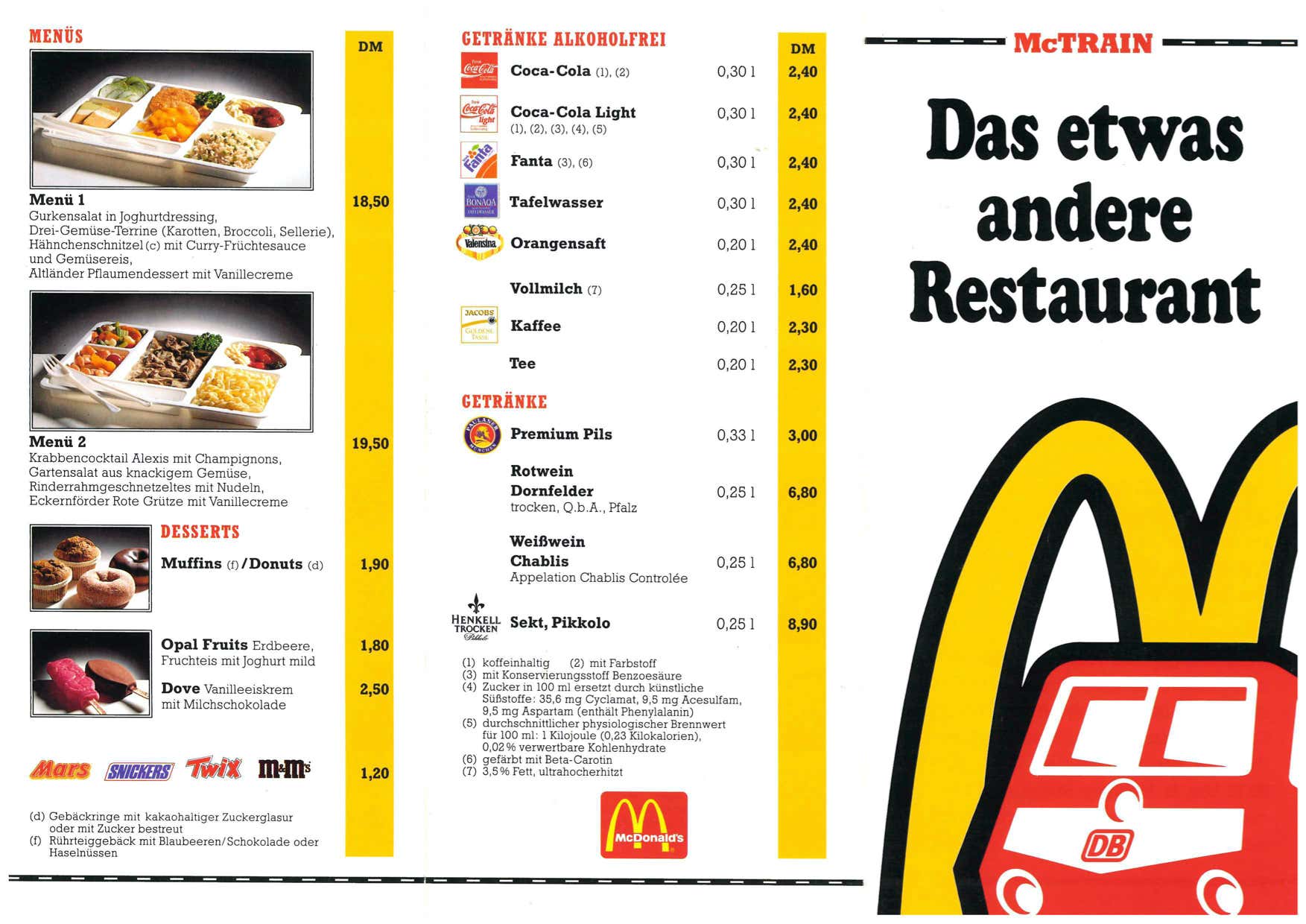 The first consisted of chicken schnitzel (yay!) in curry fruit sauce, with a side of cucumber salad in yogurt dressing, a broccoli-carrot-celery terrine, and vegetable rice, and a dessert of plums with vanilla cream. Its counterpart was a beef-pasta entree resembling stroganoff paired with a garden salad, prawn cocktail with mushrooms, and for dessert, Eckernförde red berries dressed in that same vanilla cream. None were prefixed with “Mc” to remind people which kitchen their seafood came from, making these offerings read rather gourmet for McDonald’s—as they damn well should given what they cost. The latter, more expensive of the two cost the modern equivalent of just over $17, for which you didn’t exactly get a Supersize portion.

To be fair, that price included at-seat service, with riders ordering via drive-thru-style intercoms in their seats, and receiving their food within 10 minutes by waitstaff who tended payment. This personnel also happened to present McDonald’s with one of the McTrain’s chief logistical problems: what to do with them when their shifts were over, halfway across the country from home. As we speculated, McDonald’s either had to organize transport home—which it did initially, sending employees back on the first train in the opposite direction—or put them up for the night in a costly hotel, to work the return shift the next day.

Operations were further complicated by a lengthy supply line, with McTrains resupplying not from trackside restaurants as reported, but distant warehouses at Dortmund Central Station and Munich, many miles from the line itself. As for that line, McDonald’s also cleared up some confusion about its terminus, which lay not in Berchtesgaden but the nearby Freilassing—though both are located in the Bavarian district of Berchtesgadener Land, hence the confusion.

Knowing this, we can say for sure not only where the McTrain terminated, but as we explored in our last story, when and why. Whether it served burgers or schnitzels, the Golden Arches’ offerings didn’t satisfy riders, whose appetite for either seems to have been spoiled; neither are options on Deutsche Bahn’s menu today. Whatever the reason for their absence, reading this has probably made you hungry enough to eat either, possibly even on the same bun. If you borrow that idea, McDonald’s, do me the honor of naming it the McGilboy.

Got another travel food follies to tell us about? Contact the author here: [email protected]