It’s easy to focus on the negative these days, especially when it comes to the new car industry. Prices are up, supply is down, and if one more person says “chip shortage,” I think I might go postal. Adding fuel to this fire is the ever-present specter of outrageous dealer markups on popular cars—including the 2021 Ford Bronco, which has been the subject of multiple reports this month claiming dealers are screwing reservation holders out of Ford’s hot SUV with last minute price hikes before handing over the keys. This predictably kicked the internet outrage machine into high gear. However, we took both a closer and wider look at the issue, and it does appear that the vast majority of folks who ordered a new Bronco are getting their trucks at MSRP. While they make for great headlines, the stories of people getting hit with unexpected markups are fewer and farther between than they seem.

Last week, several publications reported on a Bronco order holder getting hit with a $5,000 “market adjustment” even though the car in question was reserved by him, ordered, and built to his exact spec. As it turns out, the dealer indeed tried to mark up the truck due to circumstances we’ll go into, but as a lack of follow-up stories failed to uncover, its new owner Brian Hendra ended up paying MSRP after going back and forth with the dealership. No markup actually occurred, and a look at the larger online Bronco community will show that price gouging is not the norm for customer-ordered cars. Sure, Broncos ordered by dealers for their own inventory get marked up to the sun, but order holders’ cars are, by and large, sold for the manufacturer’s recommended price to those that spec’d them in the first place. That’s what’s visible online, and that’s what Ford says, too. 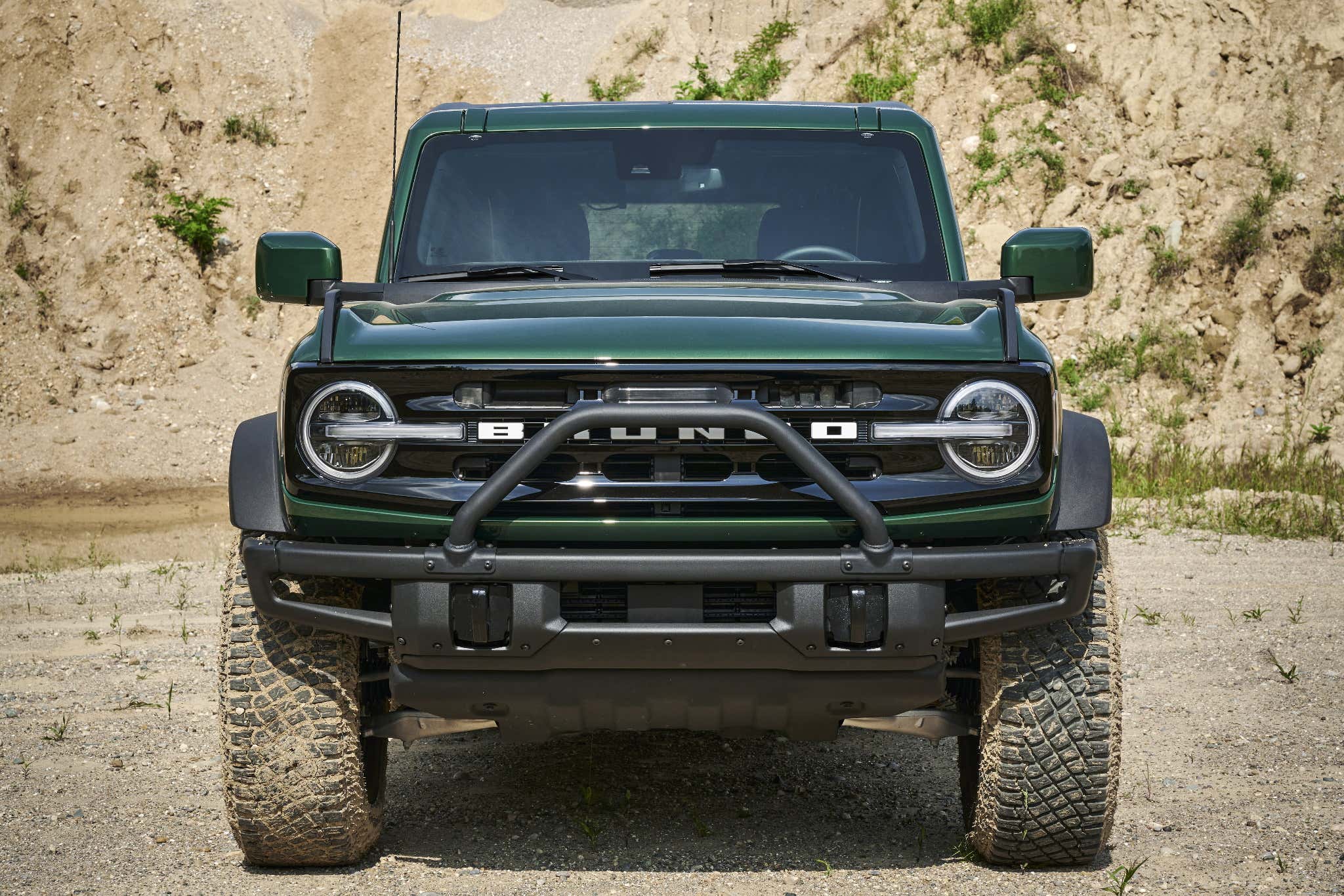 And before we continue, it’s important to make a few notes. Many dealers are selling their stock above MSRP because there’s a massive shortage of new vehicle inventory right now. In Hendra’s case, he says the dealership that was trying to mark up his Bronco didn’t “have any cars on the lot.” This is true of dealers across the country as both foreign and domestic automakers are idling plants to deal with parts shortages; simply put, every automaker is struggling to ship cars to dealers. When dealers finally get new vehicles, many try to sell them over MSRP, partially because they want to make as much money as possible, but also because most aren’t getting much stock at all and they need to make up the difference. Heck, even the Mitsubishi Mirage—one of the cheapest cars in the country—is seeing markups at certain stores. Every automaker is affected, this isn’t happening in a vacuum, and dealerships are businesses that need money to survive like any other.

This is where the Bronco—one of the most anticipated automotive releases in recent memory—enters the picture. Demand is at a fever pitch, even independent of the lack of supply. Dealers aren’t marking up their thin allocations of Broncos because they feel like it—although in normal times that certainly wouldn’t stop them—they’re doing it because supply is short and many people are willing to pay up to get a shiny new Bronco. After a look through popular Facebook groups for Ford’s new 4×4 like Bronco6x and BRONCO 6th Gen, we found owners who are trading or selling trucks they bought earlier because the one they actually ordered has finally arrived at the dealership. It sounds crazy, but it’s happening. 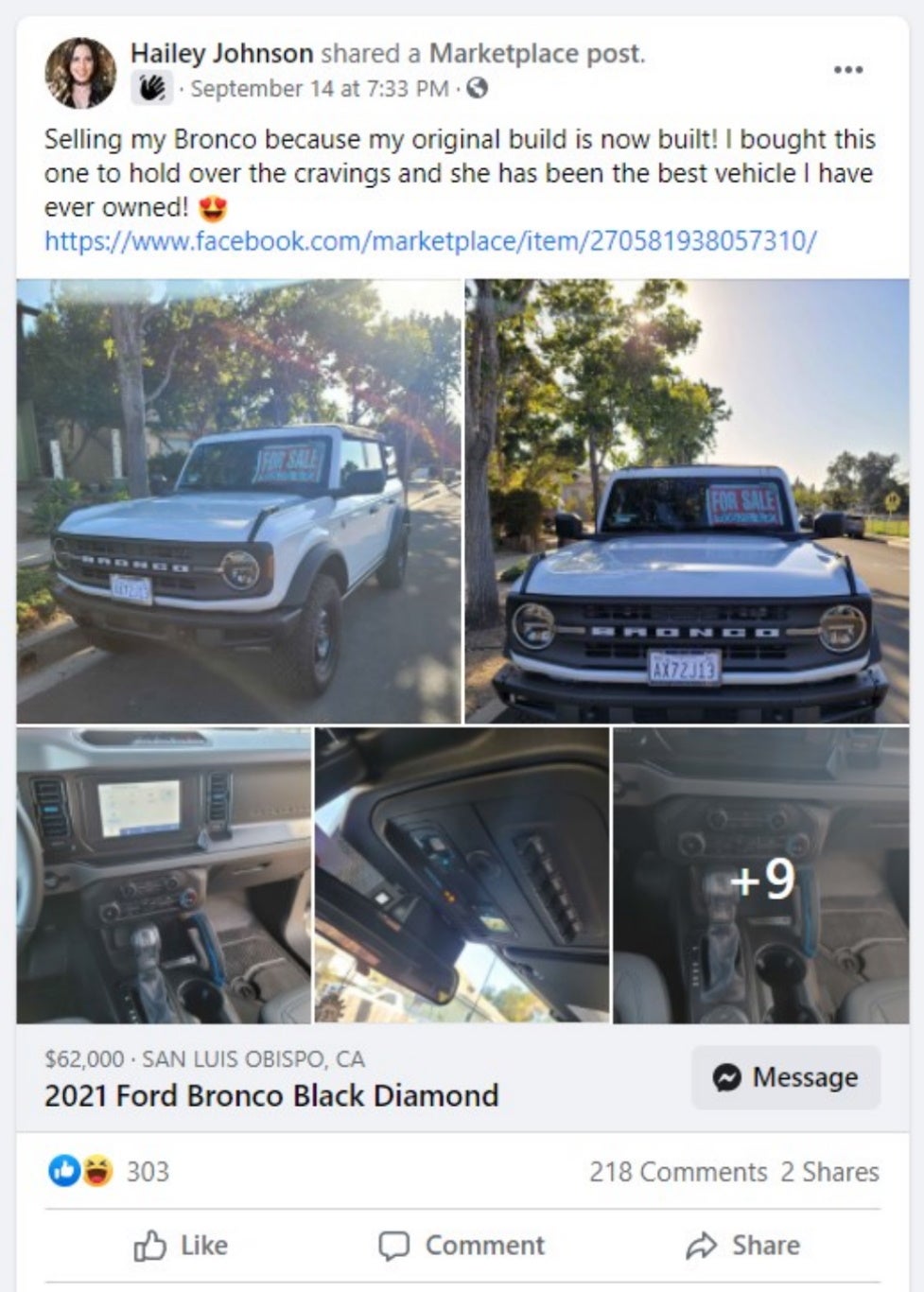 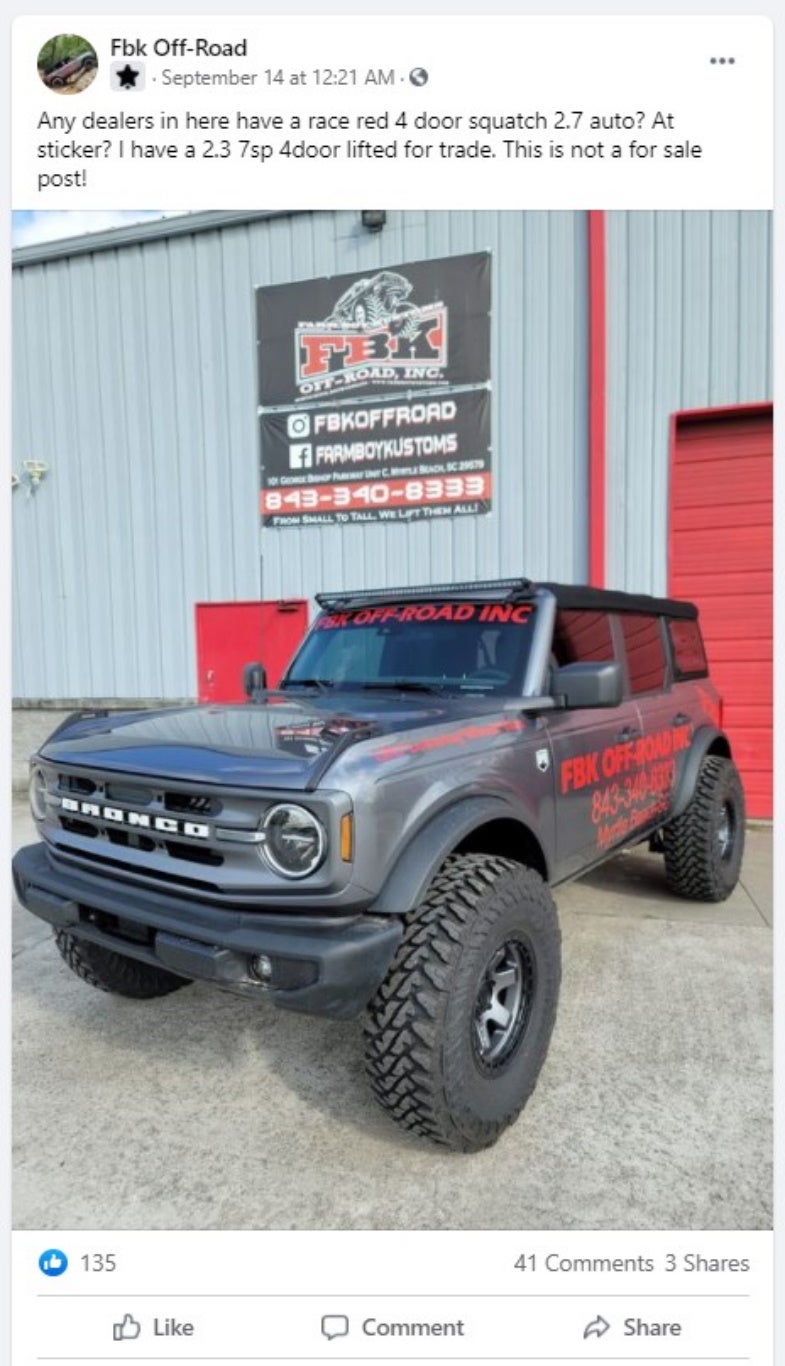 Despite this extremely high demand and craziness from buyers and dealers alike—early owners are also selling marked-up Broncos in droves—it’s not all bad for people who are just now getting their new truck. After poking around owner forums and talking with Hendra, whose dealer woes made news late last week, it’s clear that people are driving home the Broncos they ordered for the manufacturer’s suggested price.

In Hendra’s case, it was more complicated. He needed a new car with his old one nearing the 150,000-mile mark, and he had been waiting for his truck for a long time. After requesting a purchase order on his Bronco that was finally coming in, things began to fall apart. “MSRP was basically $59,000, he’s like, ‘I’ll sell it to you for $64,000,'” Hendra told us. “It was just unbelievable to me.”

Hendra was obviously upset by this, but he attempted to keep his cool and went back to the dealership until it was resolved. The situation was sorted out when Hendra spoke with a higher-up at the store, who explained why they tried to mark up the truck. He gave the same reasons we touched on earlier—they have very little new inventory, some new Bronco buyers are flipping their cars anyway, and they need money to survive.

“I understand what you’re saying,” Hendra wrote to the dealer. “There’s not a dealer in Jersey that’s not selling a [Kia] Telluride for two or three thousand dollars over cost, but I ordered this car well over a year ago. I understand you’re in a predicament, but this is an agreed-upon price for a special-ordered vehicle.”

After this discussion, where Hendra insisted he wasn’t going to flip a truck he desperately needed, the dealer caved and sold him his vehicle at the recommended price. Most people don’t have this kind of trouble, though. It’s difficult to find order holders (and especially reservation holders) who didn’t pay MSRP. Hendra’s case may have only been resolved after some heated back and forth, but comments on posts about pricing are filled with dealers who say they are honoring the MSRP on orders. Plus, there are plenty of buyers confirming that they paid sticker price and nothing more.

“We are honoring MSRP for orders at Holmes Tuttle Ford in Tuscon,” said Aaron Gillespie, an internet sales consultant at the Arizona dealership, in a Facebook comment. Then, Johnson Ford of Atmore, Alabama wrote online, “We are only selling MSRP to our reservation holders.” The list of similar remarks goes on, with the pictured responses below coming solely from the comments on a single post. Look through Bronco6x or BRONCO 6th Gen and you’ll find much of the same.

“Big shout out to Courtesy Ford in Breaux Bridge, La. for a smooth process on getting my long-awaited Bronco Badlands AND not charging more than MSRP,” one post by a new owner says. “Well I picked up my new Badlands and I love it! Couldn’t have been happier with the service at Gerald Jones Ford in Augusta, Ga. Paid MSRP,” says another. 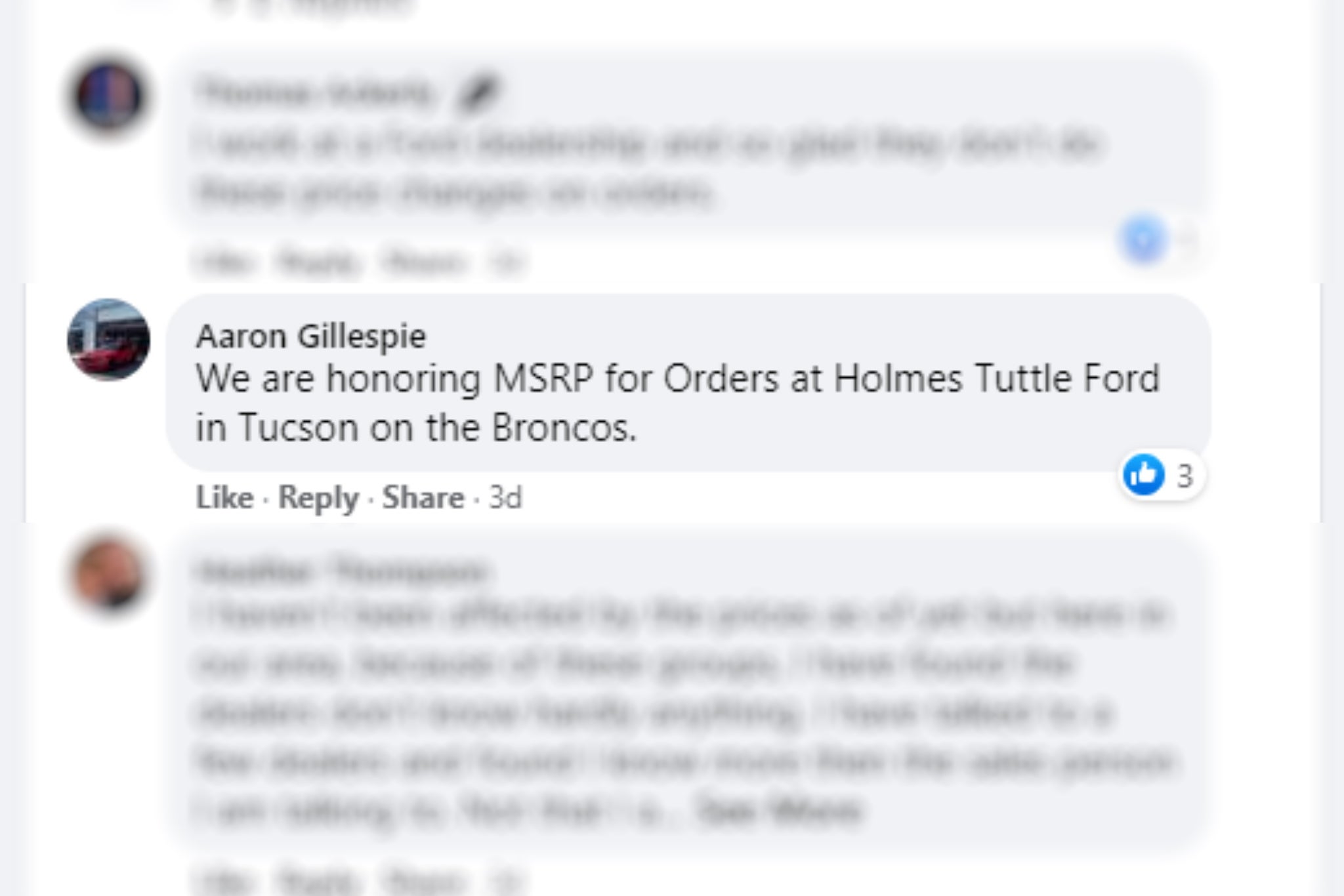 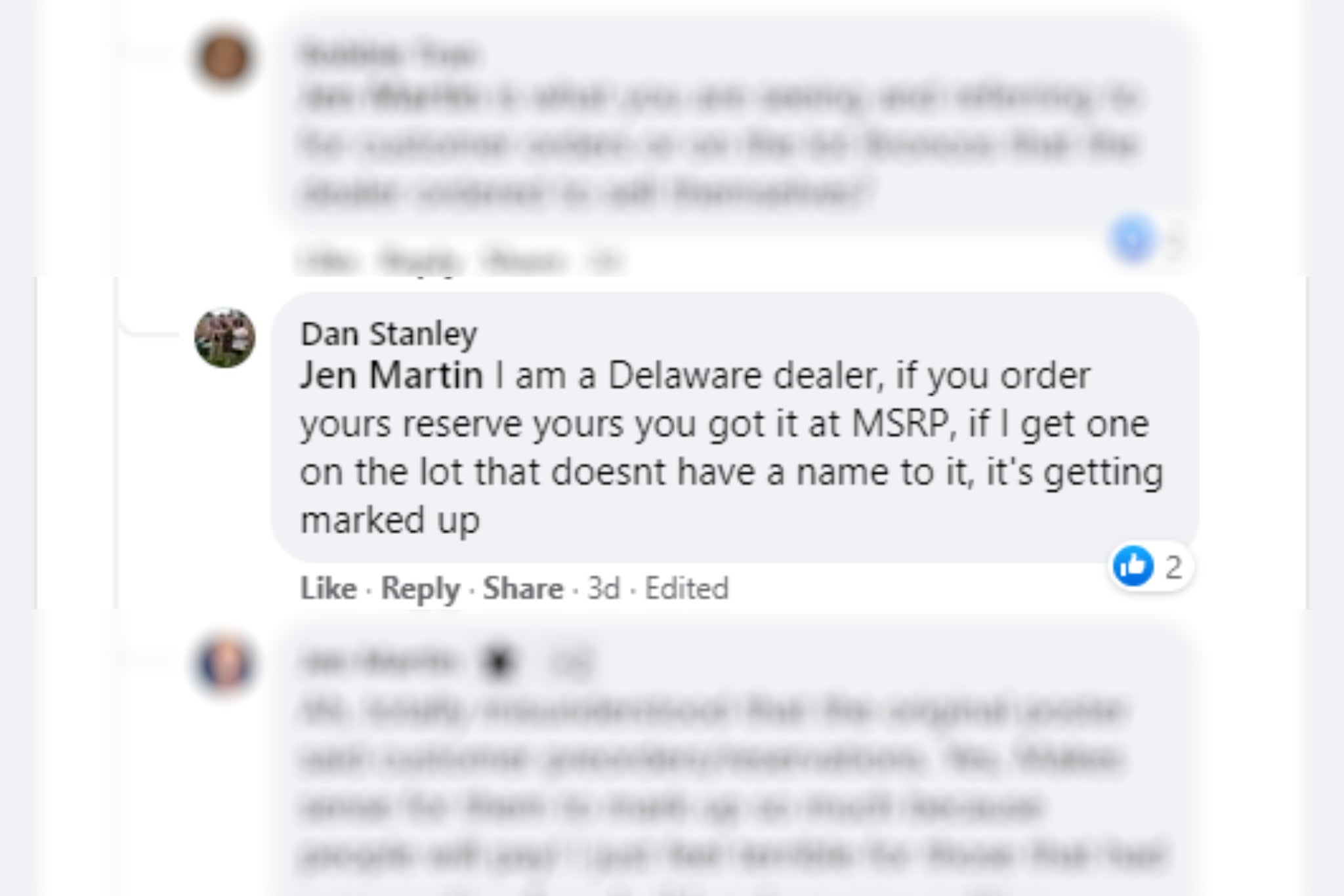 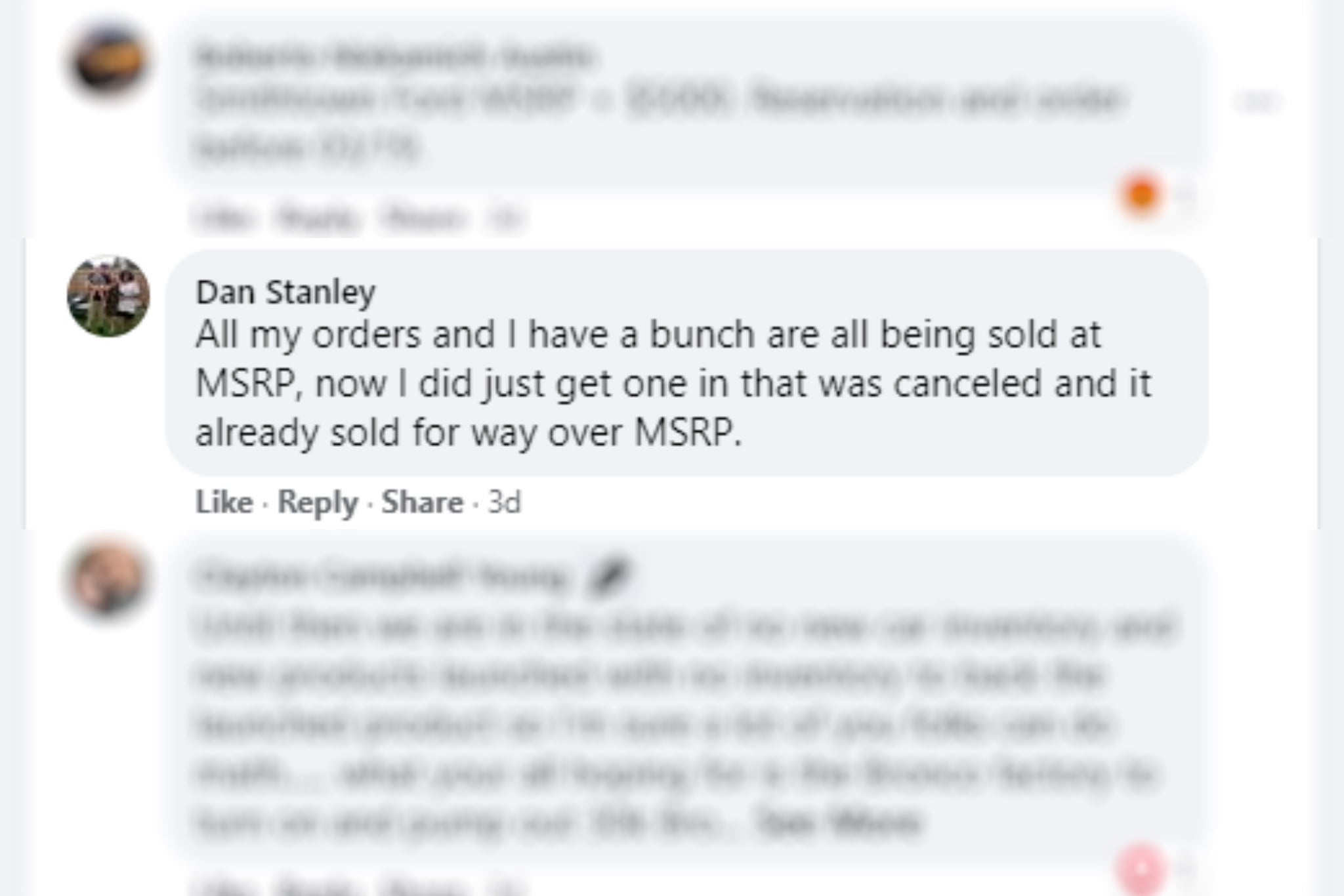 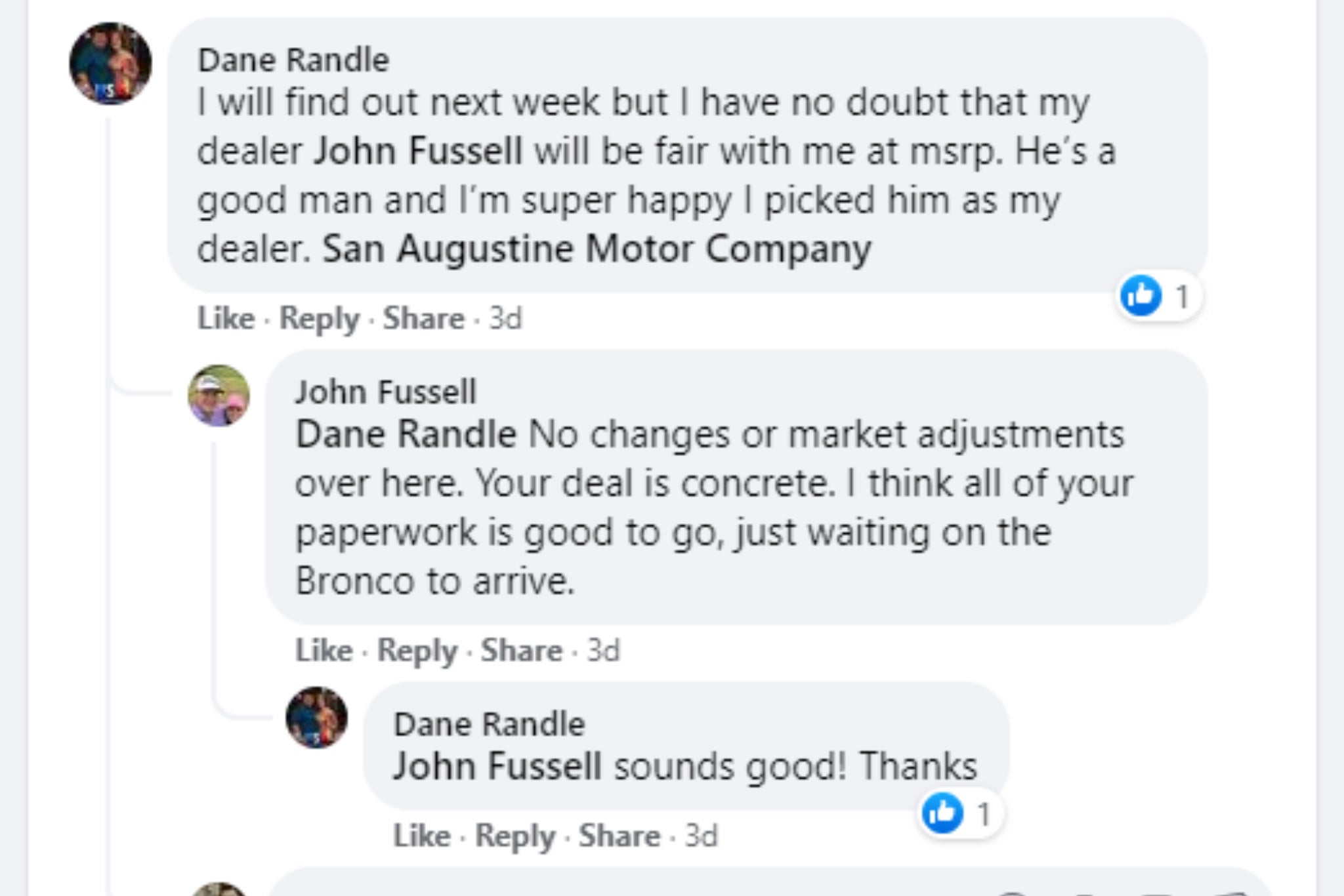 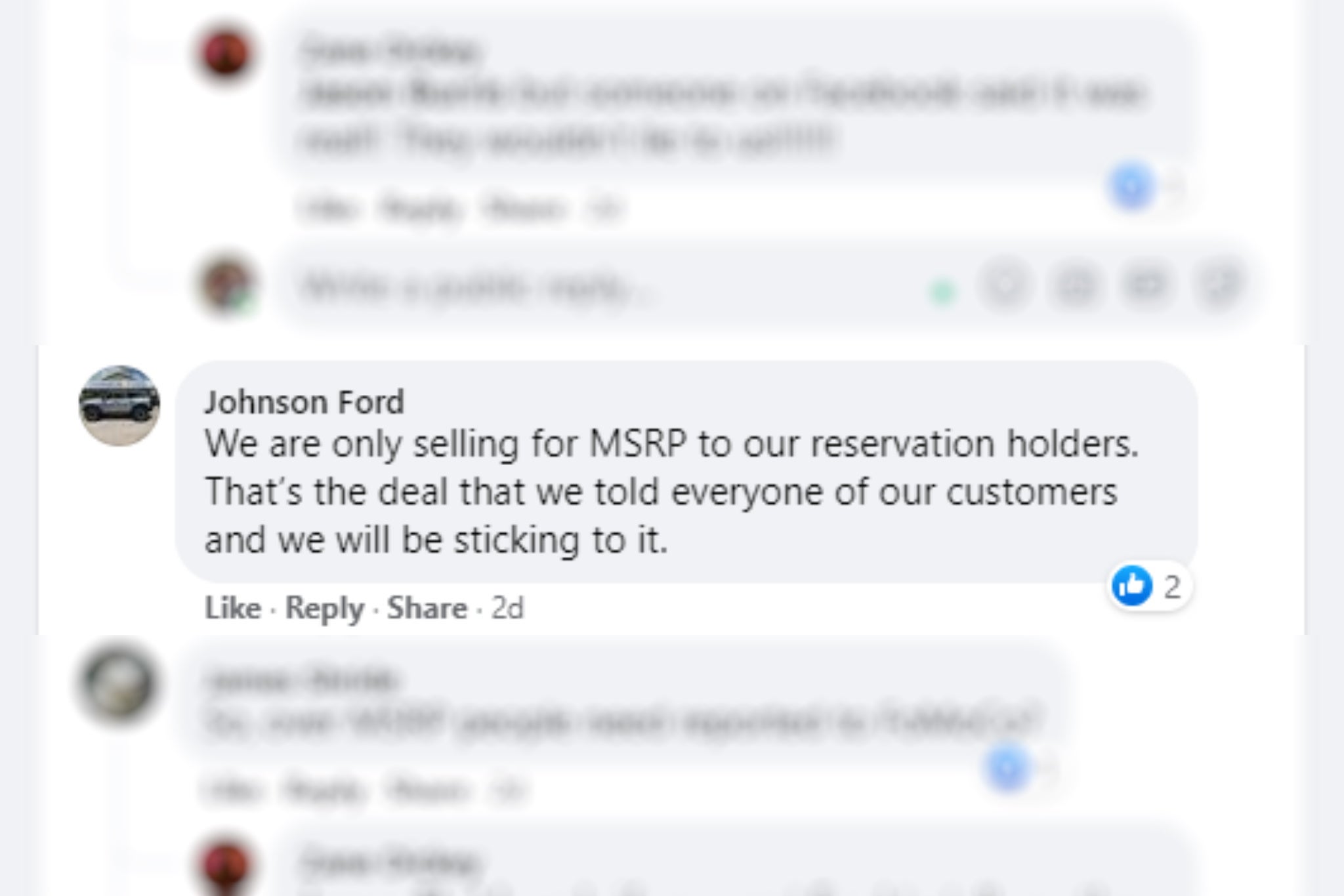 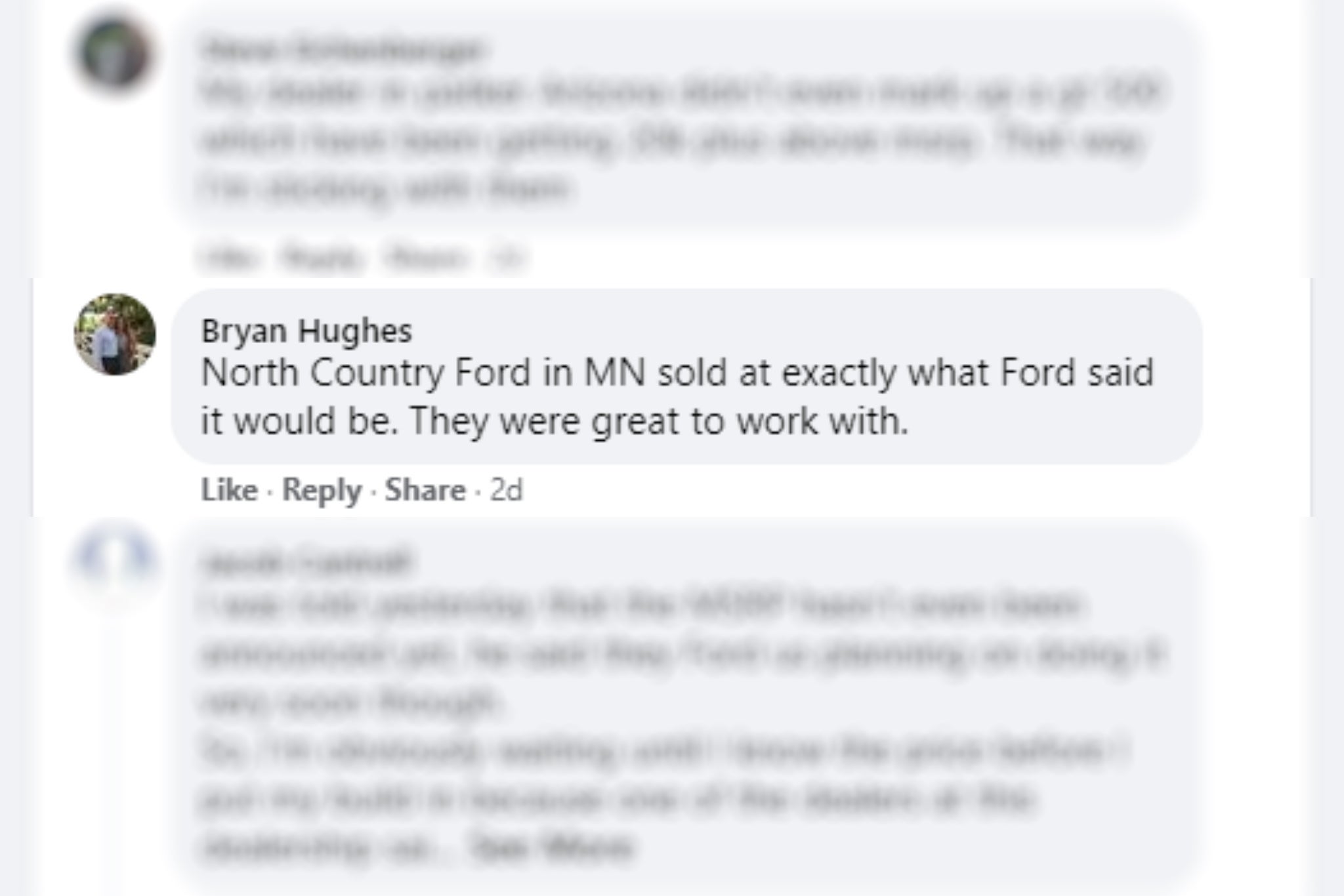 We even found a person getting a Bronco for below MSRP. One Facebook user, Lee Ann James, says she put a deposit down on a dealer demo which she’s set to receive in December for $5,000 under sticker. It’s a demo, sure, but we’ve already seen at least one report of a dealer planning to upcharge for a demo. Both of these instances are pictured below.

There’s more to the Bronco situation than people simply getting screwed, then. All sorts of vehicles from all sorts of manufacturers are getting marked up and it’s not as simple as dealerships just being greedy. It’s also worth mentioning that Ford has been making an effort to try and keep people happy. It’s sending out merchandise, directing dealers to give order holders free booze, and replacing faulty hardtops free of charge. The hype is real, but so are the delays and the disappointment. Ford knows that. 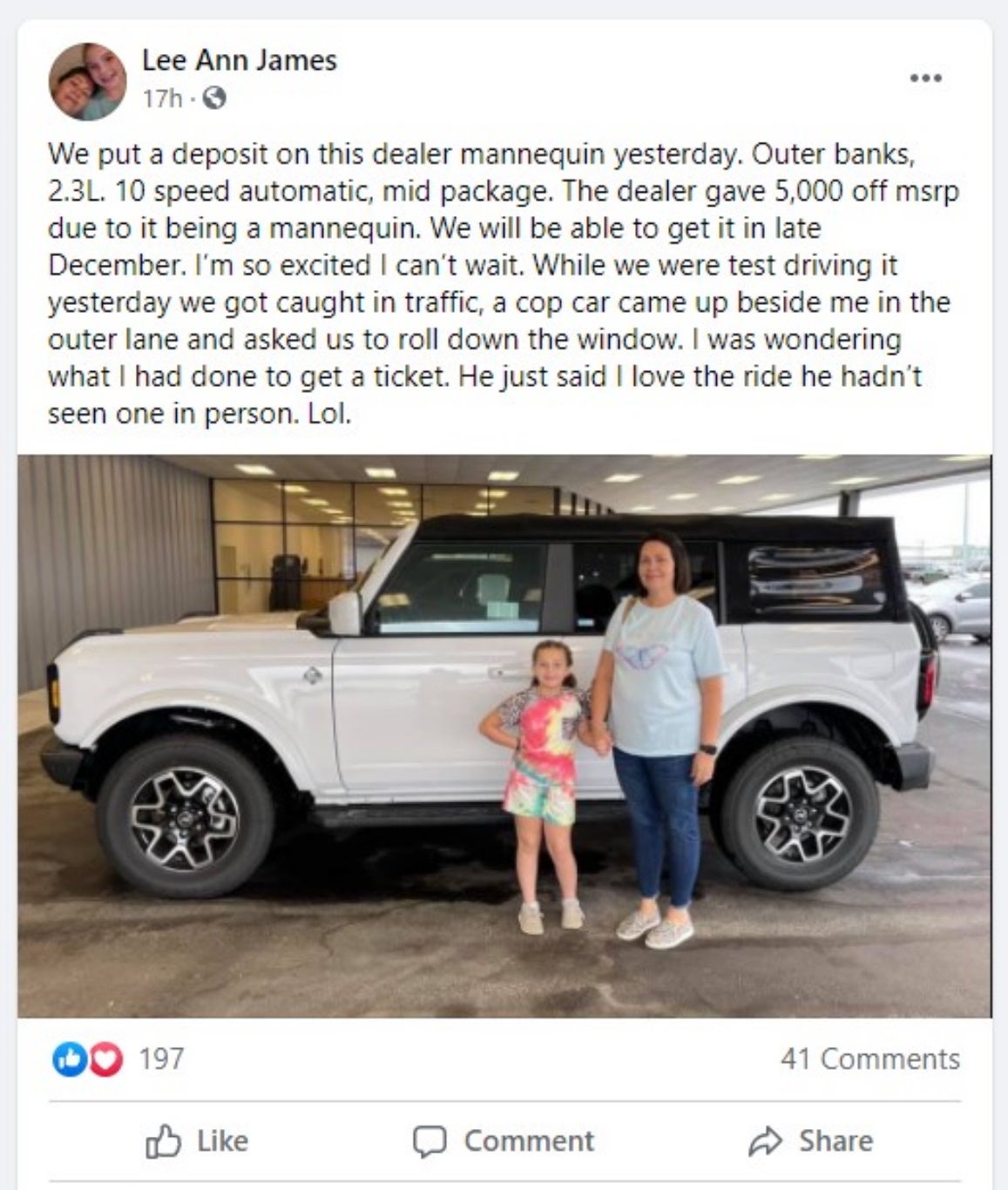 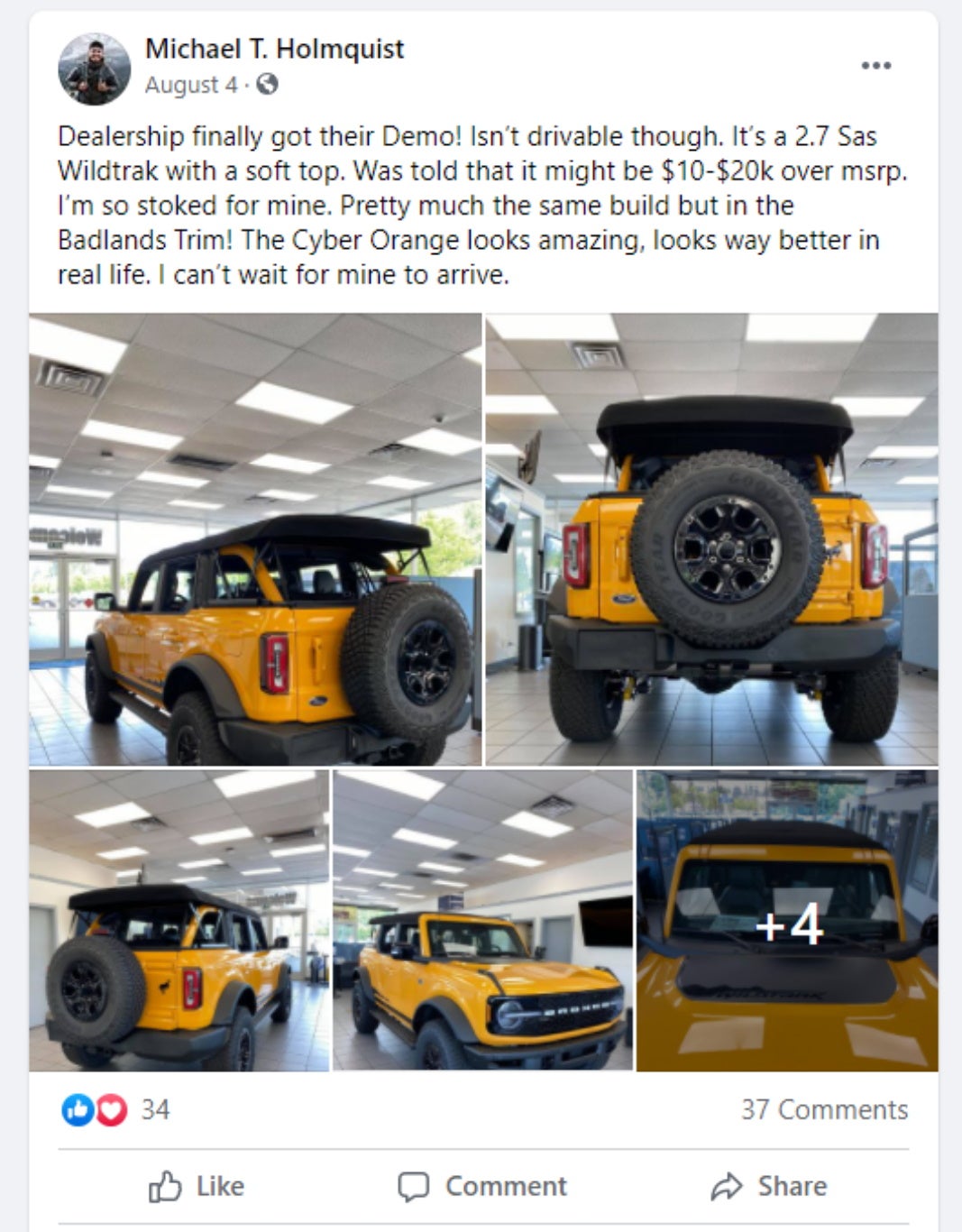 We told the automaker what we found, and being overcharged when you have an order in seems uncommon. Said Deep, Ford’s North America product communications director, noted this was accurate and continued to explain that when it comes to dealer tomfoolery, the company’s hands are often tied either way. “Ford dealers are independent franchises,” Deep explained. “We remind customers that before converting a reservation to an order, they should negotiate the final price they will pay with the dealer they select. If they cannot agree, Ford can help the customer find another dealer they will be happier to work with.”

That last part might technically be true, but it’s worth noting that Hendra claims the automaker wasn’t much help in his situation. “Throughout this whole process Ford was useless,” Hendra said. “I called them at least eight times, I asked to speak to anybody higher-up, and all they told me they could do is take the information, then send it off to their ‘dealer relationship specialist,’ and that if I don’t hear back from them in a week, I should go back to the dealership and resolve it myself.” So when Ford says that dealers are independent franchises, they mean it. Sometimes there’s not much the automaker can do.

If you’re curious when there’s going to be an end to this madness, not only with the Bronco but all over the industry, lots of folks have lots of guesses. Ford CEO Jim Farley says the chip shortage is getting a little better already and the Fed says car prices will normalize in another six months or so.  Others, however, say shortages may not go away until 2023. In the meantime, if you really want a Bronco, there’s an ideal configuration to get one in your driveway ASAP.

It may be worth waiting, though. The Bronco Raptor is coming, the chip shortage is hopefully on the mend, and after a few years, Ford will have hopefully worked out the kinks many new vehicles run into early in their production run. It’s clearly getting some practice right now.