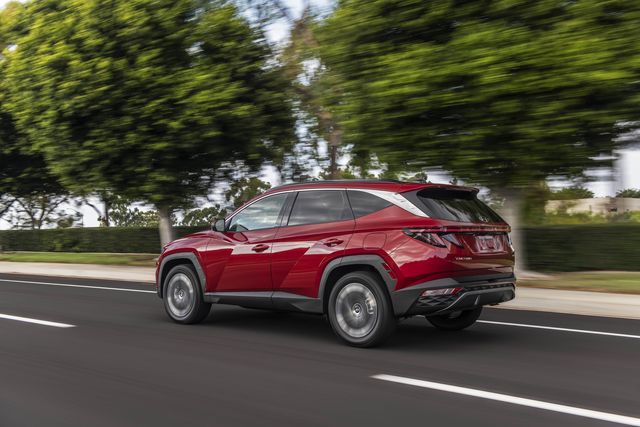 Hyundai revealed more details on its coming 2022 Tucson crossover, arriving in the first half of next year, and they look like they’ll move the humble utility closer to segment juggernauts Toyota RAV4 and Honda CR-V.

The Tucson is Hyundai’s largest-selling vehicle in the U.S., accounting for 21 percent of sales, so you could understand if the SUV maker played it safe when designing and engineering the fourth generation of this compact crossover. But Hyundai also lags behind segment giants Toyota RAV4 and Honda CR-V by a few hundred thousand units a year, so being bold is perhaps the way to play it. And bold it is, with a near-wacky exterior design the staid company itself refers to — with a straight face — as “parametric dynamics” and “sensuous sportiness.” Where else are you going to get both those qualities in one compact crossover?

First of all, it’s larger in almost every dimension: it’s a half a foot longer, an inch wider, a half-inch taller and the wheelbase is three and a half inches longer than the Tucson it replaces. That means passenger volume goes up six cubic feet and cargo capacity by 7.7 cubic feet. So it’s bigger in exterior dimensions and passenger volume than the RAV4, CR-V and everything else in the class except the freakishly square Subaru Forester. The only area where it doesn’t lead the class is in cargo capacity, and there it lags significantly, more than seven and eight feet under its main rivals RAV and CR-V. That’s only because the lucky passengers have more room. 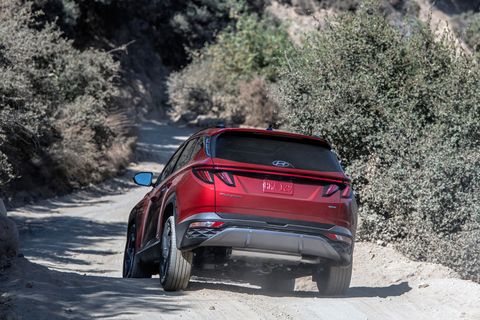 There will be three powertrain options for the new SUV, all better than previous units.

The base engine will be a 190-hp “Smartstream” direct-injection four mated to an eight-speed automatic. Torque comes in at 185 lb ft at 4000 rpm (Hyundai had previously estimated torque output at 182 lb ft). Peak power arrives at 6,100 revs. That’s 20 more hp and 25 more lb ft of torque than the previous Tucson. This engine is meant for the “heart of the market,” the volume seller, and will be the engine most buyers choose.

The hybrid and plug-in hybrid drivetrains share a 1.6-liter GDI turbo making 226 hp at 5,500 rpm and 258 lb ft of torque from 1,500 to 4,500 revs. From there the drivetrains are different. The hybrid is mated to a 44.2-kW/60-hp/195-lb-ft electric motor and includes 1.49-kWh battery. The plug-in hybrid model gets a more powerful 66.9-kW/90-hp/224-lb-ft electric motor and a 13.8-kWh battery good for 28 miles of EV-only driving. Both HEV and PHEV also have a 13-kW/32 lb ft electric traction motor for starting and stopping the gas engine. And both HEV and PHEV are thence mated to six-speed automatics. That’s a lot of numbers, take a breather.

The 28-mile electric-only range is less than the RAV4’s 42 miles and the Ford Escape PHEV at 37, but it probably covers most of the driving you do in a typical day. Write down your daily mileage and see. 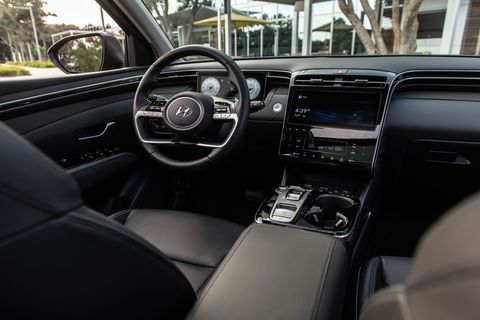 Those engines sit in a new, stiffer chassis, which you would expect, chassis stiffness never goes down with a new model, but the new chassis is ready to accommodate not only the PHEV but both battery electric and fuel cell Tucsons. Inside the new chassis are improvements to noise isolation for a quieter ride, too. Improvements to front and rear-wheel geometries as well as new e-handling electronics promise “Fun-to-Drive” dynamics, Hyundai says.

Front-wheel drive is standard and all-wheel drive is optional. A “sporty” N Line is promised but it’s going to debut after the other models, and with the emphasis on “sporty,” not sports car. Looks like it will be an appearance package alone. We’ll see next year.

Inside top trim levels get a nice new 10.25-inch diagonal infotainment screen with a larger instrument panel in front of the steering wheel. Wireless Android Auto and Apple CarPlay, an NFC digital key and BlueLink Connectivity are available. You can also get wireless charging for your phone and Dynanic Voice Recognition. Remote SmartPark Assist even backs your Tucson into a parking space in crowded parking lots.

Hyundai has made some bold moves with this new model, boldest perhaps on the outside. But that’s what it takes to make it in today’s ultra-competitive compact SUV segment.