“I can’t believe they raced this package a whole year and then again.”
-Matt Kenseth, July 12, Kentucky Speedway

It feels like a turning point, but it’s probably not.

NASCAR’s two-year love affair with reduced horsepower and increased downforce was met with the most vitriol yet in the aftermath of Sunday’s Hollywood Casino 400 at Kansas Speedway, won by Joey Logano.

For 42 laps, Kevin Harvick raced directly behind Logano, unable to break through the wall of air generated by the 8″ NA18D spoiler.

Repeatedly, Harvick would get brushed off, aero tight, before making another run at Logano, again getting foiled by the dirty air coming off the Team Penske No. 22’s giant ass spoiler, all while both drove full-throttle around the 1.5-mile intermediate.

It would have been a great race if we hadn’t all saw right through what was actually happening.

Credit absolutely needs to be given to Logano for making the right blocks and taking clean air away from Harvick because it won him the race and sent him to the Cup Series final four for the fourth time in seven seasons.

But for the second intermediate race in a row, a driver who hadn’t spent any time near the top-five throughout the first half of the race was able to get track position and then became untouchable with it.

Kurt Busch most recently won Las Vegas by catching a caution during green flag pit stops, cycled the race long contenders one lap down, and holding them off due to his newly acquired clean air. That was a car that hadn’t broken into the top-10 all night.

On Sunday, Logano (who started on the outside pole) just couldn’t break into the top-five, scoring only two stage points for a ninth-place first segment finish. Crew chief Paul Wolfe gambled with a two-tire stop with 103 laps to go, the car stuck inside the top-five, and Logano was insurmountable over the final 42 laps.

The pit stop that changed everything for @KevinHarvick.

Watch @joeylogano make the winning pass for the lead on pit road at Lap 222. pic.twitter.com/LL8jjtdcPq

The race was effectively over the moment Logano beat Harvick off pit road, and this is how the playoffs are being decided at the highest level of a motorsport discipline.

Yes, aerodynamics are always a part of motorsports, but no, this package has not lessened its impact or given drivers more input into the results — NASCAR’s stated goal of moving this direction over two years ago.

“Where we looked to make a little bit of a change was around the horsepower and that was, after discussions with the drivers, discussions with the engine builders as well, as what would be something that would produce a little more on-throttle time and have a good relationship with the aero package that we put together,” NASCAR Vice President and Chief Racing Development Officer Steve O’Donnell said in 2018 when announcing the NA18D package.

“So, we made a tweak to that. We think that’ll put it more in the drivers’ hands, especially as we go to some of the intermediate tracks and are excited to see how that plays out.”

In comparison to what we saw on Sunday, here’s a quick reminder about what it actually looks like to put it into the drivers’ hands:

Sunday’s margin of victory was .312 seconds.

That is what this direction continues to be about. Frustration with intermediate racing existed long before the NA18D package was instituted and the conversation generally centered upon how spread out the cars got during long green flag runs.

Not even two arbitrary cautions could off-set the need fans had for closer racing … even at the expense of subjectively better racing … much less more authentic racing.

The casual NASCAR fans love Daytona and Talladega above all else, creating a sense that good racing is when cars are side-by-side and nose-to-tail, rather than throttle control, tire management and an ability to pass.

There’s no racing the track with these things attached the rear-end of the cars. 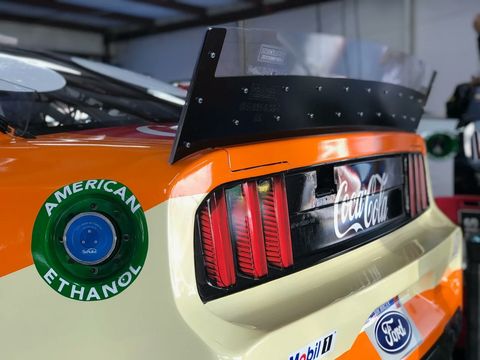 Sure, there are considerations about the next-generation engine platform, which has a target of 550HP, but the extreme downforce is about keeping drivers from having to lift, the element that separates an elite car from a good car, keeping them bottled together.

However, when everyone runs the same speed and there’s not enough power to break through the wall of air generated by the 8″ spoiler, it becomes extremely challenging to make a pass on a leading driver.

We’ve seen it throughout the 2020 season.

Kyle Busch says teams have optimized the NA18D package in terms of how much to trim out and it has equalized the competition.

“A 13th place car went from running 13th to the lead and won the race. Just drop anyone out front and that’s possibly where they can ride.” pic.twitter.com/nnrBmAHg1J

Teams have since figured out the balance between downforce and trimming out, and Kyle Busch said last week, that the end result is just ultimate parity — everyone running in a line and unable to pass.

“Last year, this new aero package, everyone was trying to fine-tune the downforce and drag, and it seems like everyone is a lot closer now,” Busch said. “We drop the green flag and we spread out a little bit. I was running second and the third place guy was running me down and then stalled out and couldn’t pass me.

“The fourth place guy then ran into the third place guy and stalled out and couldn’t pass. No one was passing and no one is going anywhere.

“(At Vegas) my brother and I were running 12th and 13th with Nemechek with about 30 laps to go. We took our tires, Kurt stayed out when the caution came out, inherited the lead and clean air and won the race.

“So a 13th place car, went from running 13th to winning the race, so drop anyone out front and that’s possibly where they can ride.”

The finish between Logano and Harvick is being sold as an epic battle between two champions but that simply wasn’t the case. The cars were closer together and the clearly faster car wasn’t even able to mount a challenge, much less complete the pass.

That’s not racing, especially while not lifting off the throttle, but rather the illusion of better racing.

“One of the things I think this aero package provides is close racing at the front and leaders, and sometimes they can, but not checking out,” Scott Miller said on Monday morning. “Is is hard to pass? Yes, it’s hard to pass.

“I don’t know that a different aero package makes it all that easier to pass. What you’re racing is the cream of the crop and it’s not easy to pass the leader if he’s one of the elite teams.

“You can make the argument both ways, but this is what we’ve got and I believe it’s made some exciting racing. Some people like it and some people don’t. We like the racing and we like the action.”

And yet, with the decision to revert to low downforce for short tracks and road courses, plus Darlington and Nashville next season, deep down inside they know.

NASCAR is largely winning this debate on attrition, hoping fans eventually reluctantly accept it for intermediates, especially after Cup Series drivers started to adopt the ‘it is what it is’ public perspective towards it this season.

They said their peace last year and it wasn’t enough.

At least the 2021 schedule minimizes the importance of these races during the regular season, but it’s still problematic to have the final three-race round feature two intermediates back-to-back in Kansas and Texas, especially if it encourages races to be won on pit stops and through clean air.

It’s actually remarkable that fan reaction was increasingly frustrated on Sunday. It’s not like this was a new development. These races have largely played out in this fashion for two years. This time there wasn’t a late caution to stack up the field and encourage them to start crashing each other.

Surely, the longstanding dislike for Logano had something to do it as well. But at the same time, when the faster car just couldn’t find a way around for 42 laps, even the most ardent defends of this package not located in Charlotte or Daytona begins to run out of excuses and counterarguments.

Yes, Matt Kenseth, they ran this package for a whole year, and brought it back this year, and they’ll do the same thing in 2021.

You just have to hope the Next-Gen car will eliminate the need for such a package, even if it’s being built around it.

Where do you stand on the NA18D rules package? Tell us in the comments section below.