Triumph Motorcycles is working on an updated model of the Triumph Bonneville Bobber and spy shots have emerged of a prototype on test in Spain. The spy shots do not reveal much of any change in the powerplant, but the prototype sports new suspension and brakes, so Triumph is obviously working on making the Bobber handle and brake better. The current Boneville Bobber may have the ‘bobbed’ cruiser style, but it definitely doesn’t lack in performance or handling. The updated Bobber could well get sharper dynamics, and brakes. 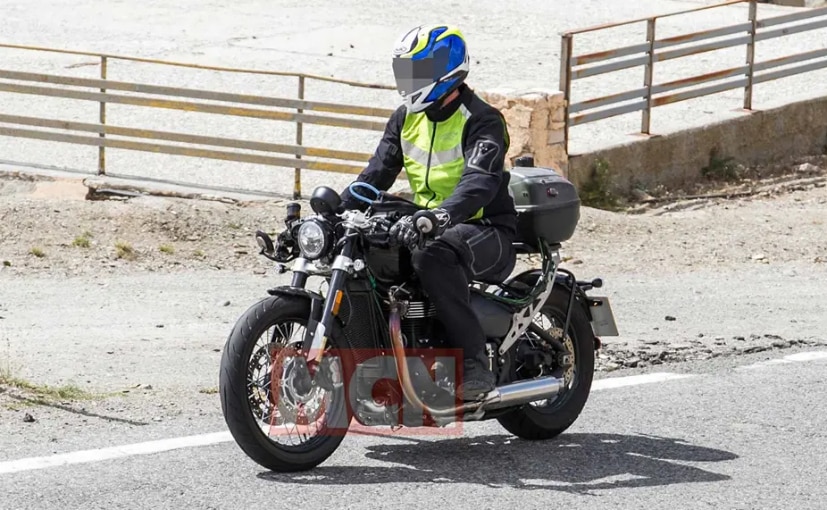 At the front, the standard fork has been replaced with fully-adjustable Ohlins suspension. And the Ohlins fork will offer better control at high speed, as well as customisation to set up the suspension for individual rider preferences. The brakes seem to be swapped with top-spec Brembo M50 monobloc calipers on twin discs, which will offer significantly better stopping power than the single disc on the current model. The new Ohlins fork is attached to a new set of yokes, and the flat handlebar has been swapped out for a pair of clip-on handlebars offering a sportier riding position.

The underseat rear shock also appears to have been changed, and could be a fully-adjustable Ohlins unit. The rear brake set up though remains the same. From the pictures, the engine appears to be the same, but it could be the high-power 1200 cc engine from the Triumph Speed Twin, or even the same ‘high torque’ 1200 cc from the Bonneville T120 with a mild re-tune. At this point of time, it is difficult to gauge any other mechanical changes. There’s no word yet from Triumph on updating the Bobber, but the prototype seen in these pictures could well be a more performance-oriented Bobber R, or the next model in the Triumph Factory Custom (TFC) range. We expect Triumph to showcase a production version at this year’s EICMA show in Italy.