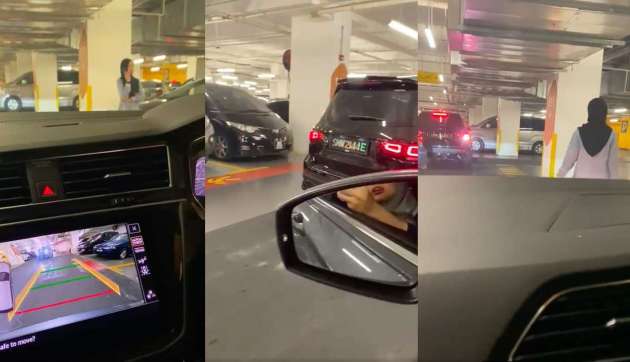 Getting a parking space in a shopping mall during a peak period is often a challenge, so when you do come across a bay where the car in it is ready to exit, you rejoice, switch on your indicator and wait to complete the parking process after the car leaves. Then you see a person walking up to the parking bay, but don’t really don’t bother too much about it at first, until it dawns upon you that the person is attempting to “chup” the parking spot for their car.

Chances are, you’ve probably come across it at one point. The act of reserving a parking spot in such a manner isn’t a rare occurrence – it isn’t exclusive to us. A recent case that surfaced in a video that has since gone viral cements the fact that the practice continues to occur, but what makes this one quite special is that the people doing the “chup” weren’t local, or at least, the vehicle wasn’t.

According to the owner of the Hey XpG Facebook account, which the video was uploaded to, the incident happened to her younger brother, who was waiting to enter a parking space that would soon be vacated by a Toyota Corolla Altis. It was not stated where the incident occurred.

However, a woman then pops up at the parking lot to ‘reserve’ the lot. After the Altis left the parking space, the woman stopped the car who was waiting to park by standing in front of the car to block access, following which a Mercedes-Benz GLB with a Singapore registration plate moves in front and then proceeds to reverse into the bay. Honking at the offender proved futile.

Now, it may be simple enough to brush it off as trivial (perhaps not, if you’re the one waiting there and then played out in such fashion), but the act of reserving a parking space in this manner is actually a punishable offence.

The police has said it before, and so has the road transport department (JPJ), that stamping your claim on a parking lot by standing in it (or for that matter, by placing a chair, cone or whatever object) and denying another the right to park in it is an offense under Section 50(3) of the Road Transport Act 1987. 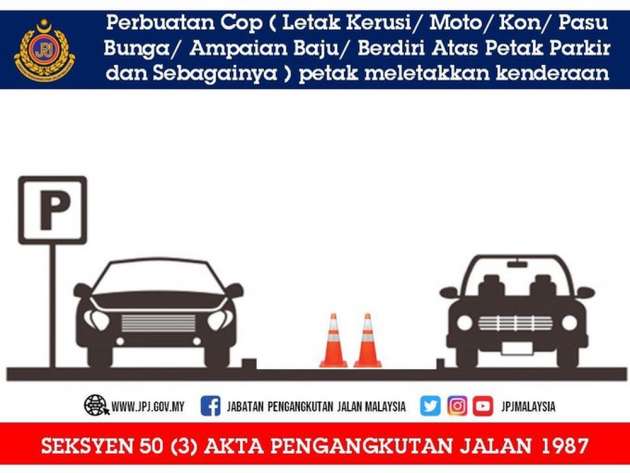 The rule clearly states that “if any person, otherwise than with lawful authority, remains on any road or at any parking place for the purpose of importuning any other person in respect of the watching or cleaning of a motor vehicle, or for the purpose of directing any driver of a motor vehicle in respect of parking on such road or at such place, he shall be guilty of an offence.”

According to JPJ, this law is applicable in all areas, whether in public places or private premises including shopping centres. Chargeable under Section 119 of the Act, the penalty for the offence is a maximum fine of RM2,000 or imprisonment of up to six months, with a RM4,000 fine or 12 months jail term for subsequent offences.