When someone buys a new car, they generally expect to be getting a vehicle that’s fully up-to-date, not one built with leftover parts. Tesla customers who don’t read the fine print, though, could accidentally end up paying the price for a “new” Model 3 with a years-old battery, one which Tesla acknowledges may have already lost almost an eighth of its total capacity.

Use of older batteries in new Model 3s was first observed on Twitter, where user William Hummel shared images of a disclaimer on Tesla’s website that notes up to 12 percent reduced range stemming from the cars’ use of batteries built as far back as 2017. These screen captures were not of Tesla’s online configurator as Hummel’s use of “new car” might lead one to believe, but from Tesla’s inventory page, where “new” Model 3s are indeed listed for sale with the range disclaimer shown, along with a partial explanation accessed via the “Learn More” button.

“This vehicle was built with a battery pack manufactured as early as 2017,” reads the popup. “While this pack was brand new when the vehicle was built, the cells have reduced capacity due to their age and you can expect up to 12% reduction in range from current production specifications.”

This passage doesn’t explain why new Model 3s have been “built” with 2017 batteries and implies installation at the factory rather than refurbishment at a service center. It adds another layer of confusion as to why these cars are being sold as “New,” though it may be one partially explained by another label: “Demo Vehicle.”

What makes a demo car isn’t formally defined by Tesla, though calling a Tesla showroom and speaking to a salesperson confirmed these are often retired test drive vehicles, and are sold as-is, possible cosmetic defects and all. Various sources online such as Tesla forums also indicate they may also be ex-engineering testbeds, or declined customer cars.

Not all ex-testers in Tesla’s new inventory have range disclaimers, though evidencing some inconsistency in how old-spec batteries are installed, which the Tesla salesperson we spoke to couldn’t explain—though they could confirmed these old batteries are usually installed at the factory, and that Tesla considers them to be “new.” As for why old batteries end up in some Teslas, but not others, they might only be installed in cars destined for demo duty, while those without range disclaimers could be customer cars that weren’t delivered for one reason or another. 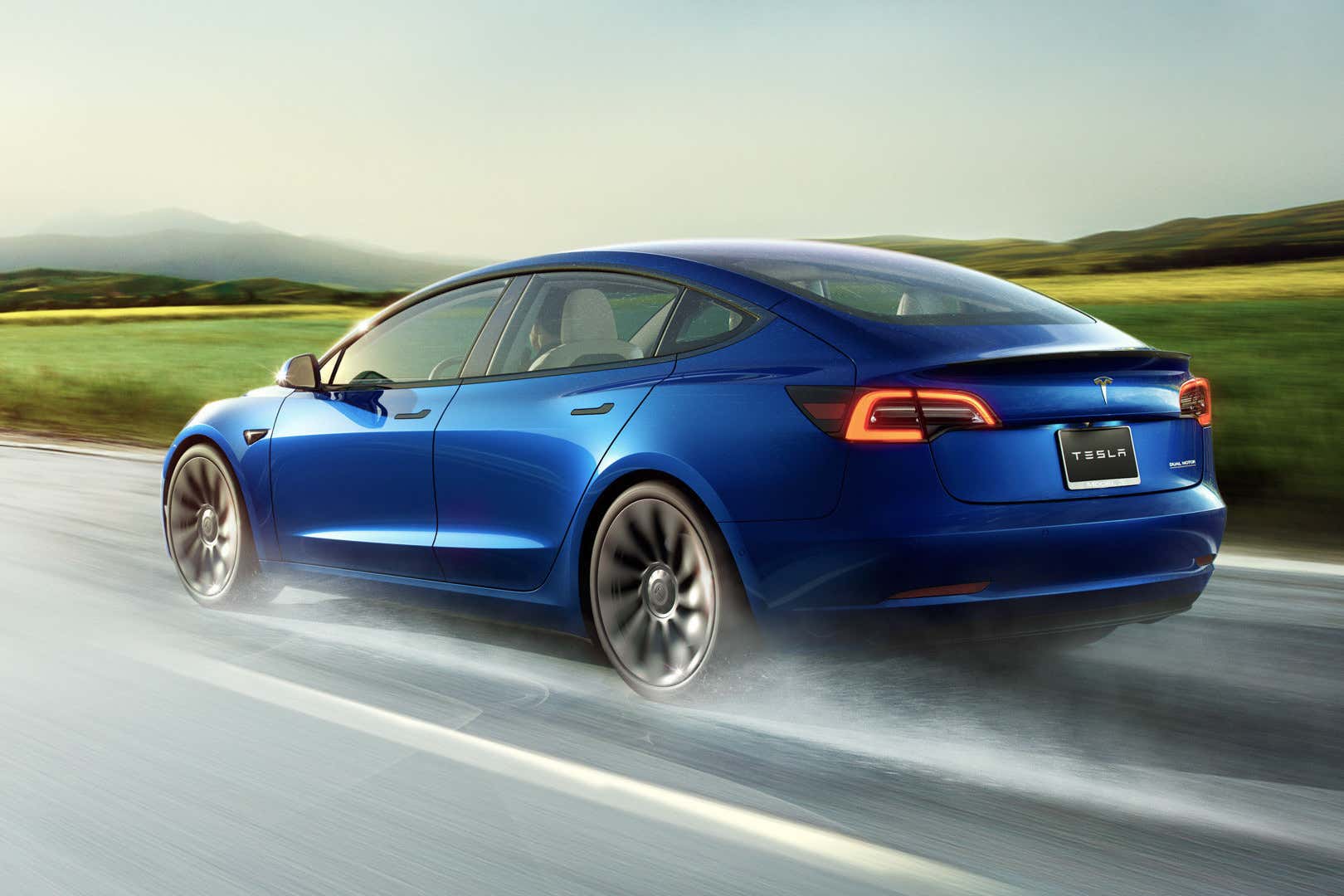 Selling a car with significant wear and tear as “new” will certainly furrow a few eyebrows, though it’s not an uncommon practice in the industry. Dealerships will sometimes take delivery of cars, never title or register them, keep them around for demonstration purposes, and still call them “new.” It’s happened before. But between these cars’ deteriorated batteries and some of their odometer readings—which record hundreds or even over 1,000 miles—it raises the question of how loosely dealerships and Tesla stores define “new,” and whether its meaning in Fremont is as nebulous as that of “Full Self-Driving.” Can a car with unknown history—that likely includes a large proportion of full-throttle driving—be considered new?

From a customer’s standpoint, that’d probably be a no, not with degraded batteries and the minor cosmetic imperfections, like scratches, that some Tesla demo owners have described in forums. From a legal one, though, there’s some leeway to Tesla’s benefit. Titles for new cars are typically sent from dealers (or in this case, Tesla) to the Department of Motor Vehicles after purchase, meaning these cars have likely not been titled in anyone but Tesla’s name. Legally, they’re probably still new cars, which one Reddit commenter speculates may also help Tesla customers secure state-level tax incentives.

So, Tesla has cars with a diminished market value that it still can legally sell as “new.” It acknowledges their conditions, though, and to a degree, prices them accordingly; all ex-demo cars in Tesla’s inventory are sold at a discount, though only a small one. At the time of access, Tesla’s inventory listed one 2021 Model 3 Long Range AWD for $62,320, as opposed to the $63,690 a car of the same spec would cost in the configurator (including destination charge).

Provided you don’t mind it having 428 miles on the clock and a potential scuff or two to the paint, that seems like a solid deal—until you check their options lists.

That 2021 Model 3 Long Range AWD has been equipped with Tesla’s $10,000 “Full Self-Driving Capability,” which itself is a shaky value proposition, to put it kindly. In short, Tesla CEO Elon Musk has promised for years that his cars would drive themselves any time now, only for Tesla to admit that its “Full Self-Driving Beta” will never surpass SAE Level 2 Autonomy. Tesla’s Full Self-Driving development has hit a figurative wall, all while legacy carmakers pull ahead with functionally superior systems.

Why exactly old batteries are ending up in late model Teslas, unfortunately, remains unclear. Tesla could be putting new-old parts stock to use, as Jalopnik speculates, or it could be refurbishing its demo cars, though that seems like something Tesla might disclose. In either case, Tesla dissolved its U.S. public relations department long ago, so the best explanation available short of tweeting at Musk himself is the incomplete one we already got from a salesperson. And Tesla’s secretiveness isn’t going unnoticed, even by its own dedicated customers.

“I think the idea of Tesla putting ‘new’ old batteries into brand new vehicles is appalling,” commented Tesla customer William Hummel, who has a car on order. “If you bought any other product (car, iPhone, whatever) with a lithium-ion battery that was years old (and thus, already chemically degrading) wouldn’t you be mad? You’re getting less than what you paid for and what was promised on the sticker. At minimum, Tesla should discount these vehicles below MSRP. Selling them for full retail is insulting.”

What is certain is that if you’re looking at a Tesla, be extremely careful how you spend your money. These discounted “new” EVs aren’t the deals they may outwardly appear to be; not with their reduced range, sometimes blemished bodies, and overpriced driving assist software that can’t tell the moon from a traffic light. And that goes without mentioning what may lurk where owners are never meant to look.