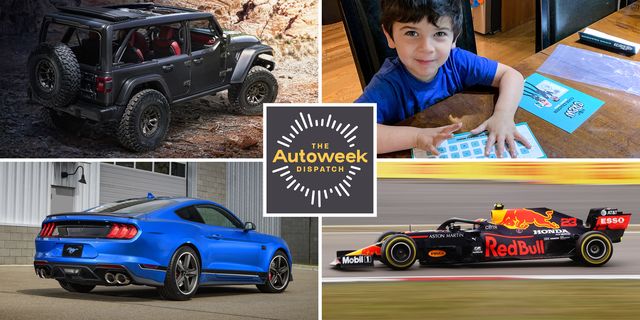 Ford opens the Mach 1’s order banks while Mercedes-Benz AG alters its EV strategy in the U.S. Here’s what else is happening in the car world:

FROM THE EDITOR’S DESK

The Wrangler Rubicon 392 Concept has been on my mind ever since Jeep unveiled it the same July day Ford showed the Bronco. I find the Hemi Jeep interesting on so many levels. First, there hasn’t been a V8-powered Wrangler since the early ’80s CJ days—and that one had 125 (!) hp. And second, there’s no question Jeep is what keeps Fiat Chrysler Automobiles afloat, and the recently redone Wrangler, in its gazillion forms, is a big part of what keeps Jeep itself afloat. That “recently redone” part is important: Jeep designers did a phenomenal job revamping the Wrangler, updating what needed it while leaving the foundations alone. It all begs the question, where does Jeep take the Wrangler next and where does the 392 fit, if it fits at all? To find out I reached out to a guy largely responsible for both today’s Wrangler lineup as well as where the brand is headed, chief designer Mark Allen.

Allen has held the top Jeep job since 2009 and reports directly to FCA design poobah Ralph Gilles. Allen has been climbing the ladder in the Ram and Jeep studios since he started at Chrysler in 1994. He knows what he’s talking about.

“Redoing the Wrangler is always a delicate balance,” Allen told Autoweek. “We get lots of pressure from all over the building, mostly from people that don’t understand that vehicle. They love the profit and the sales and they want to apply things that worked on other vehicles to the Wrangler. Part of my day-to-day job is getting people to understand (the Wrangler) just a little bit better.”

As for the 392 Concept Allen told us, “Probably the No. 1 thing customers ask for is, ‘Can I just get more power?’” He said that didn’t really happen so much with the previous few generations. “The new one has a longer wheelbase and as the vehicle has grown, larger tires—37 inches, 40, 42— are common, so the desire for greater power output is increasing.

“Aftermarket companies have been putting V8s in Wranglers for a while, but it’s gone from ‘I would like to have’ to ‘I gotta have.’ So the timing was right to do the 392, and I’m happy it happened.”

Allen told us the 3.6-liter V6 is a terrific all-around engine and the 2.0-liter turbo-four is a “pretty lively package. The 3.6 is plenty for most people, especially with a 35-inch tire. But the 392 is an answer to the people beating the drums and saying, ‘I really, really want more power, and I’m willing to pay for it.”

“The truth is, we offer it (a base Wrangler Sport starts at $28,295), but then the market doesn’t embrace it like we think they would. We sell a lot of high-end Wranglers. People can’t help themselves and start checking all the boxes. Part of the problem is us, because we keep giving them more boxes to check.

“The Wrangler’s success (FCA sold more than 228,000 last year is on pace to do roughly the same this year) is nothing that anybody saw coming, nothing anybody predicted. It’s crazy.”

To keep the momentum going, a V8-powered Wrangler might be a must, especially since customers keep asking for more power, Jeep keeps giving them “more boxes to check” and we keep seeing prototypes running around. Allen wouldn’t say specifically, but it sure sounds like more than a possibility. I’ll be first in line to drive it.

The 2021 Ford Mustang Mach 1 officially returns this week, on the anniversary of Chuck Yeager’s record-setting flight as the first to break the sound barrier (about 767 mph). The order books are open and the base price is $52,915, including destination. To put that in perspective, the base EcoBoost model is about $28K, the GT is about $37K and the outgoing Bullitt is about $49,000. The Mach 1 arrives at dealerships this spring. It sort of replaces the Bullitt in the Mustang family, sitting above your average GT and below the discontinued GT350 (sniffle).

Mercedes officially put its plans to launch the EQC electric SUV on the back burner this week, opting instead to start its EQ sub-brand in the U.S. with the electric EQS sedan. Daimler AG/Mercedes-Benz AG boss Ola Källenius said Benz plans to show the production EQS here next spring and start selling it next summer. The EQC electric crossover was originally going to come first. Källenius didn’t say exactly when it would arrive here but did say Mercedes is also planning a battery-electric Maybach model, set to debut in about three years, as well as battery-electric G-Class. Huzzah!

Formula 1 is still trying to process what Honda’s exit following the 2021 season really means. Red Bull and AlphaTauri—the two teams most affected—haven’t yet said what their 2022 engine plans are, and paddock buzz has it that it’s Renault or nothing for the two teams. Neither Mercedes nor Ferrari seems anxious to cut some kind of deal to help out one of their chief rivals. Mercedes says it already has its hands full, and Ferrari says at this point it isn’t considering it. Renault, the team by rule that would have to supply the two teams, says it hasn’t been contacted.

No question sanctioning bodies have had their ups and downs this year, but the NHRA has had it worse than most arguably: The title sponsor, Mello Yello, the Coca-Cola owned soft drink company, suddenly terminated its participation (the contract ran through 2023), charging the NHRA didn’t hold up its end of the contract during the pandemic. Sounds like a real bush-league move to me. Anyway, the NHRA sued, and a day later a dismal situation suddenly looked up after a tweet from Camping World CEO Marcus Lemonis said, “Hey @NHRA we at @CampingWorld aren’t scared of our commitment to racing … let’s sit down and talk sponsorship … we’re good for it, just ask your friends at @NASCAR.” They signed a multiyear deal. If you log on to NHRA.com you now find the NHRA Camping World Drag Racing Series.

Lexus insists it is serious about making its cars performance machines. Putting its yen where its mouth is, the company has opened a new test track in Japan said to be modeled on the Nürburgring. Shimoyama promises to be an excellent resource for engineers tuning various Lexii. And this week Robin Warner is wheeling around in a car partially developed there, Lexus’ third-gen IS, now with a wider front track, less unsprung weight and a gazillion powertrain combos. You can read about all that here. And don’t forget, the new IS might also be getting a nice, meaty V8 under that new hood.

Here’s a friendly reminder that if you want to pass your car love onto your kids, joining R&T Crew is a great way to start. R&T Crew is the kids’ club from Road & Track. Every other month your young’uns get an R&T Crew box filled with a magazine, car-related projects—a favorite so far was a build-your-own F1 car made from wood—wearables like sunglasses, a bandana or T-shirt, and other fun interactives to hopefully keep them away from their screens for five seconds. Oh, and there are always a few cars; sometimes they are Hot Wheels, sometimes they’re other types of die-casts. A yearly subscription is $40 per box, a bargain! For a $15 savings, subscribers can pay $225 for the full year or subscribe just to the kids’ magazine for $25 per year. Of course you want in for your kids, so sign up right here.

In the latest Quick Spin I hop behind the wheel of the 2021 Jaguar F-Type R and guide you through the good and the not so good. After that I’ll take you on a ride and review the car in real time. Peppered in between I educate young Wesley Wren about all things F-Type. Tune in here, on Spotify, Apple Podcasts, Stitcher or wherever podcasts are played.

QUOTE OF THE WEEK

“The convertible market is pretty much dead, but we sell hundreds of thousands of them a year because every Wrangler and Gladiator can be made into a convertible. It’s a cool thing to be able to pull the doors off, flop the windshield and pull the roof off. I call it the Lego aspect.”

That’s it for this week. As always we’re on the case this weekend, monitoring and reporting on automakers’ and sanctioning bodies’ latest happenings. We’ll continually update the site, of course—you’ll know what’s happening when we do. Check back often!

Thanks for reading Autoweek and please stay safe.