Everyone here at The Drive loves cars the same way you do. We get to drive a lot of them, ranging from gas-swilling swan songs to electric vehicles that force us to rethink performance, efficiency, and styling—often in a geometric way (but not always). 2021 brought EVs into the mix in a big way; so much so that they’re now more than a novelty and instead, a real option that people are turning to, and not just because they feel like they have to. Oh yeah, and let’s not forget trucks—my favorite!

In a year when making (and buying) cars was extremely hard—even more so than in 2020—the greater auto industry strung together a real humdinger. We witnessed the return of the small pickup with the Ford Maverick, the first new Toyota Tundra in forever, and the genesis of electric performance off-roaders like the Rivian R1T. It’s been a lot, and we expect 2022 to be even more interesting for the automotive industry.

But before the new year arrives, we wanted to highlight the very best cars and trucks our team of writers and editors tested in 2021. While most new cars these days are at least “good,” some still stand above others, and we wanted to pick the finest stuff we drove. It’s an unmatched mix of quick, fun, capable, and innovative across many different categories: trucks, luxury cars, EVs, hot hatches, at least one $4 million hypercar, and more.

Without further ado, here’s our Very Best Cars list of 2021.

You won’t find anybody here who hates budget performance cars. Who hasn’t considered a GTI at least once? 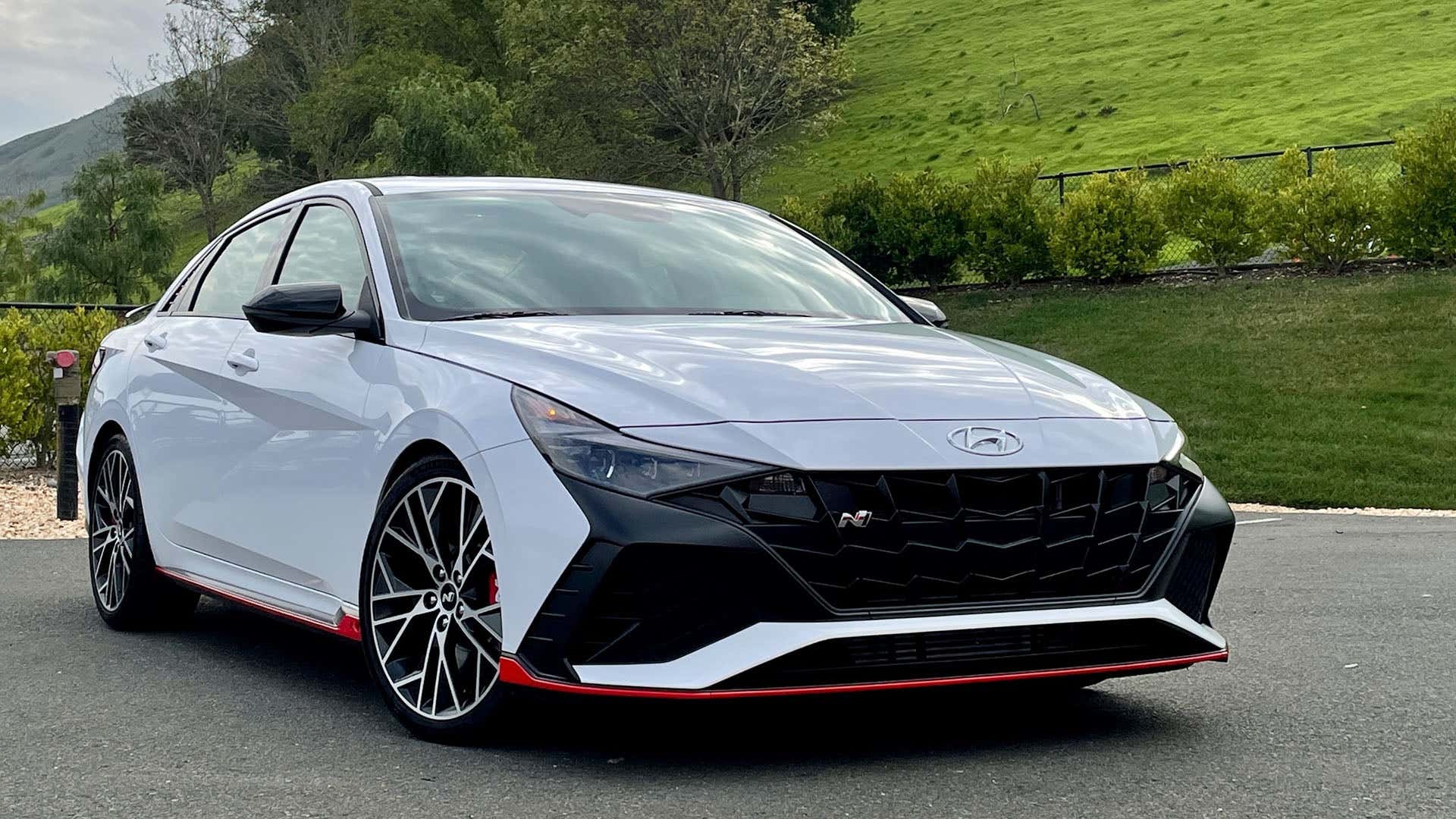 Okay, maybe not, but that’s okay because we’re talking about the Hyundai Elantra N here. It’s a tremendously enjoyable little car that fits in the same niche as the aforementioned VW and Honda, even though it’s a sharply styled sedan. Its 276 hp, supreme front-wheel-drive dynamics, and snappy six-speed shifter touch all the hot buttons, as our guy Chris Tsui found back in November. And at $32,925, its price won’t make you wince.

Let’s switch to the opposite extreme. Driving the Bugatti Chiron Pur Sport “is to embrace chaos, both without and within,” as our deputy editor Kristen Lee put it in her review. 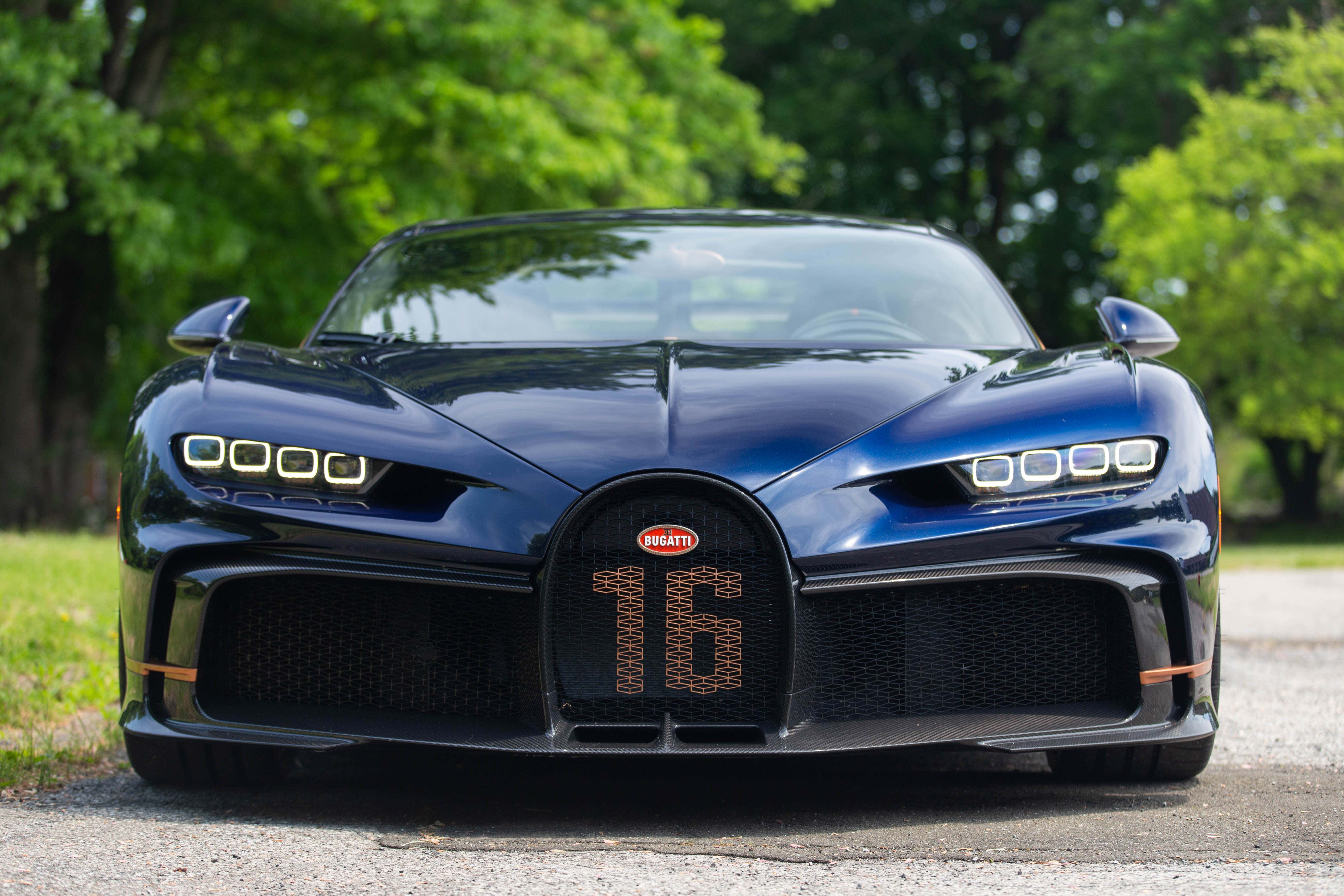 Comprehensively describing the $3,788,900 Chiron is a tricky task. At 1,479 hp, the quad-turbocharged W16 is the king of internal combustion, though it’s still just one component in an unbelievably well-constructed package. Every part you touch is next-level, and I still find myself wondering what it’s like to just sit in it. Kristen, though, she doesn’t have to wonder.

There were four years of pent-up hype going into our first drive of the Rivian R1T. You wanted to know how it drives and we wanted to know if a truck from an EV startup could actually be any good. It really, definitely is. 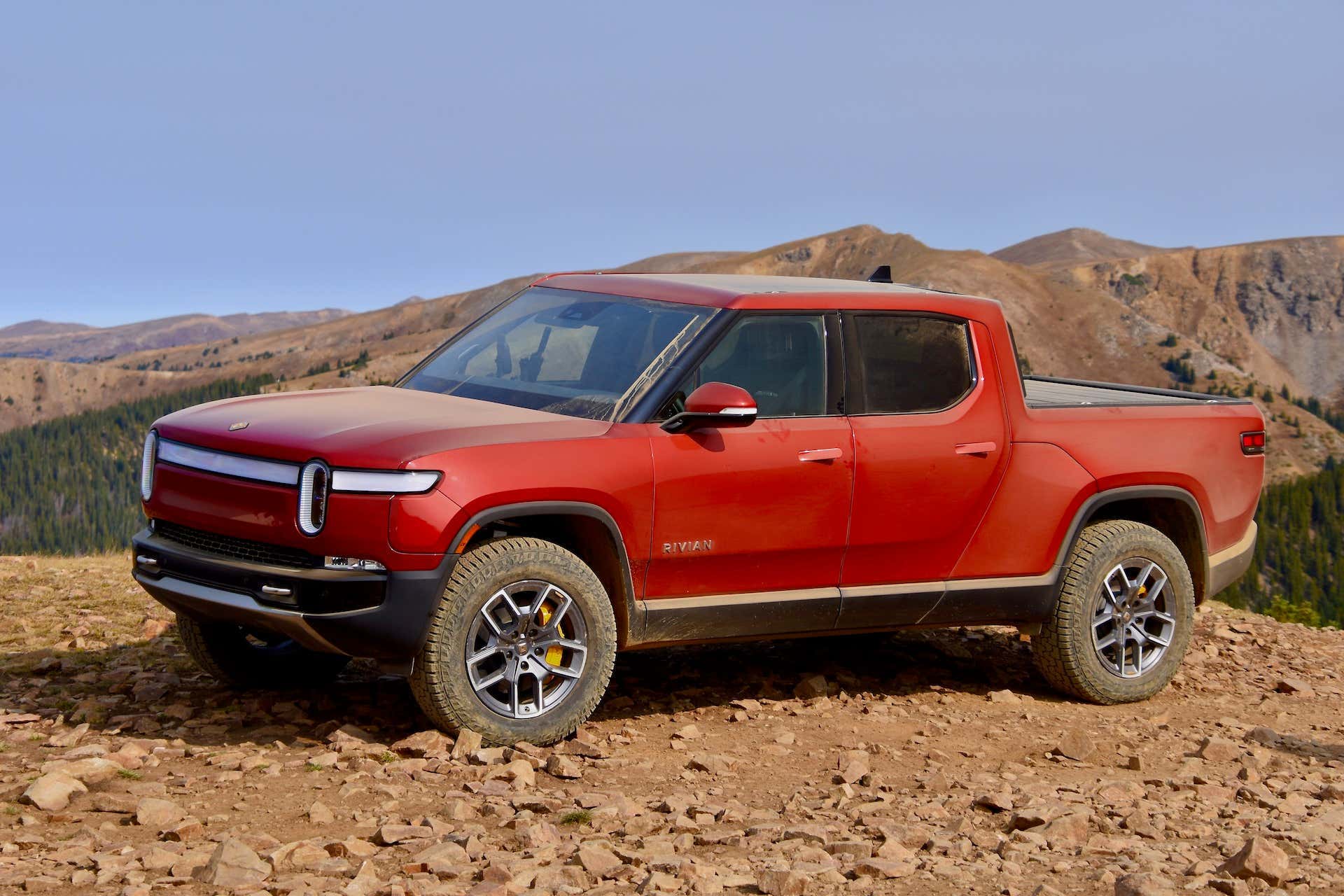 Staff Writer James Gilboy drove it on the rugged terrain of his native Colorado back in September, praising its quad-motor drivetrain. Not only is it stupid quick, with 835 hp and 908 pound-feet of torque, but it’s also stupid capable when the going gets rocky. Since the truck is able to send all the necessary power to each individual wheel whenever needed, it maintains unbelievable traction and requires minimal driver effort—that’s not a bad thing when you’re trail riding for hours on end.

No matter how you slice it, the R1T is undeniably one of the greatest vehicles of 2021, and for more reasons than its battery power. As James put it, “The fact that it comes from a company new to the industry makes it all the more impressive.”

Wanna know what’s better than a single great compact sedan? One that can be spun off into a performance variant, one generation after the next, while delivering stellar results every time. That’s what you get with the Honda Civic and Civic Si, which were both new this year. 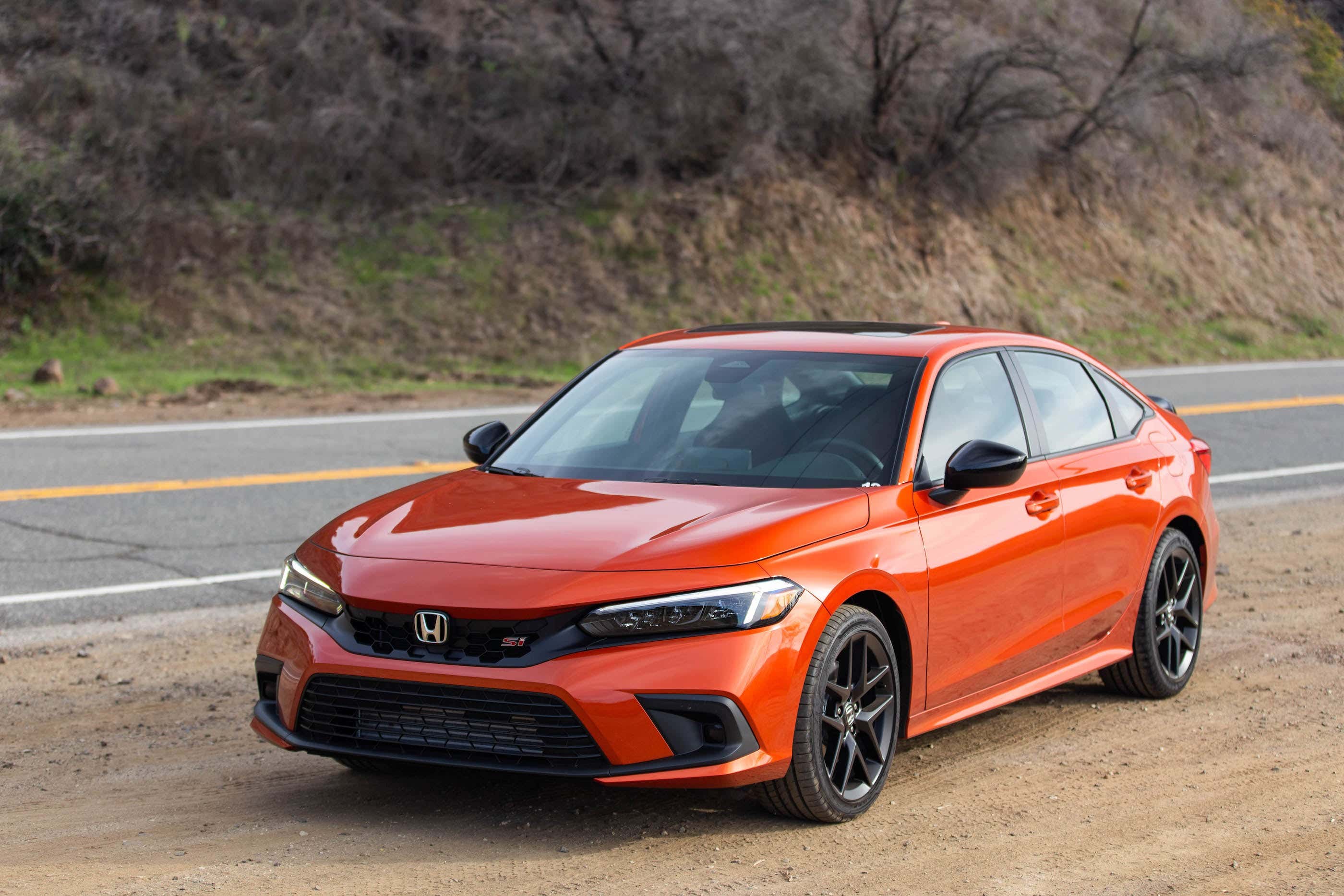 As our editor-in-chief Kyle Cheromcha explained when he drove the base sedan this June, the car absolutely fulfills its intended purpose. That alone isn’t enough to earn it a spot on our list of best cars, though. Rather, it’s here because it returns to a more honest design inside and out, one that’s virtually timeless without seeming old or dated. The 2022 Civic is what a Civic should be, and that’s competent in every way.

It only makes sense, then, that the go-fast Si is a hoot. The Drive‘s deputy editor Kristen Lee wheeled it through SoCal’s canyon roads, which really makes more sense in one of these than a 200-mph supercar. That point was proven throughout the drive when she was especially impressed with the tossable chassis and—gasp—electric power steering. If any car can get that right, it ought to be the Civic Si. Whether you’re in it for affordability and practicality or pure manual gearbox fun, the new Civic gets the job done in every form.

If you’re driving the Ford Mustang Mach-E GT as intended, you’re probably going to have a headache afterward. But that’s okay! Because this sucker accelerates so quickly, it pins you back in a way that few cars can—and yes, I’m including gas-powered Mustangs in that mix. 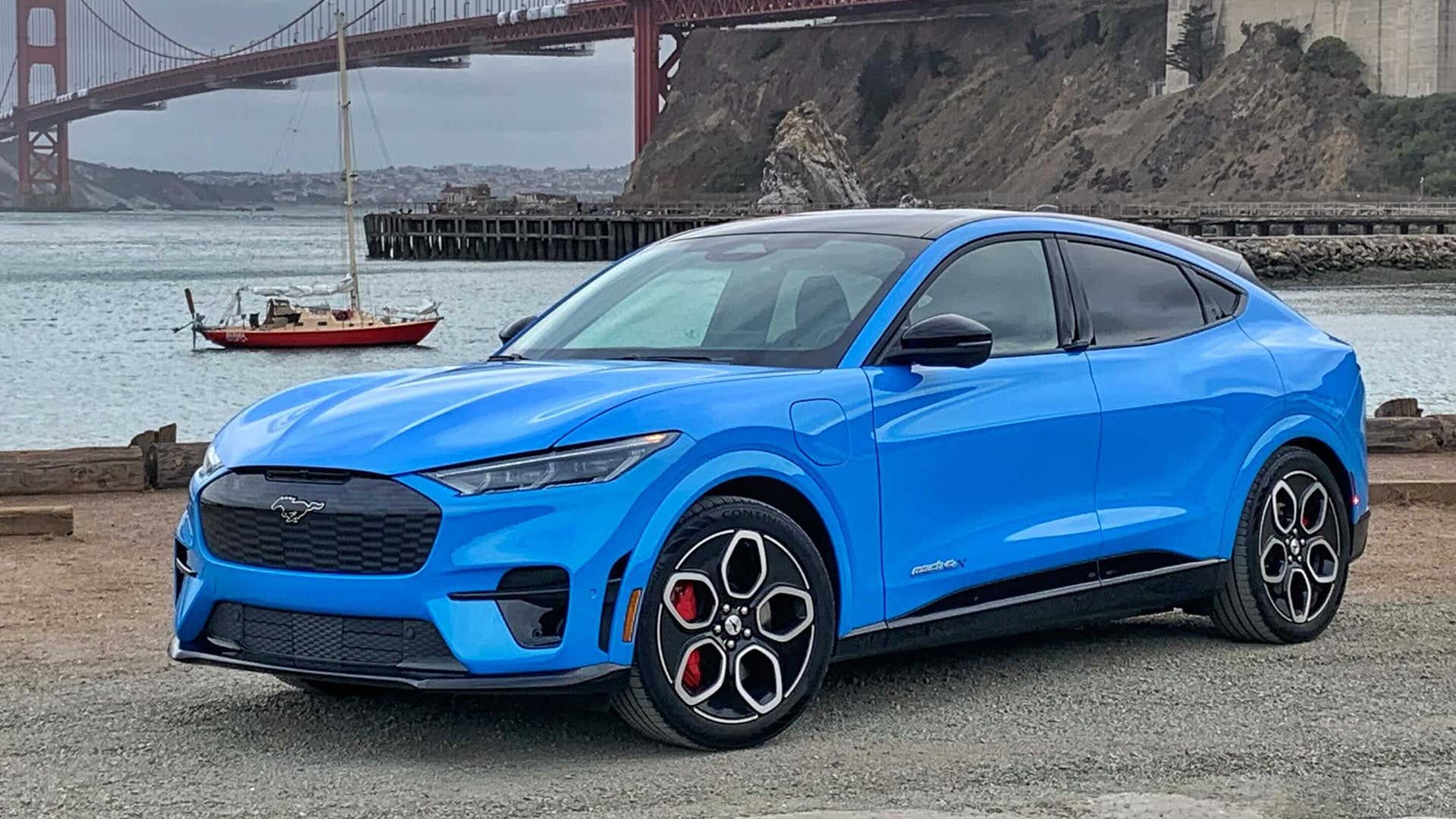 Our managing editor Jerry Perez wrote that the 480-horsepower Mach-E GT has “doubt killing performance.” He argued that Ford should’ve led with these models to begin with; essentially, whoever’s noggin gets tossed violently into the headrest will become a believer. That’s what instant torque will do for ya—all 634 pound-feet, in the case of the Mach-E GT Performance Edition.

I’ve yet to read a bad review of the current-generation Tahoe and Suburban. With comfy yet sturdy independent rear suspension and an interior that’s at long last modern, the platform mates are already at the top of their game, which is saying something given their stellar pedigree. And as it turns out, the 3.0-liter Duramax diesel inline-six is an even better match for ’em than a grunting gas V8. 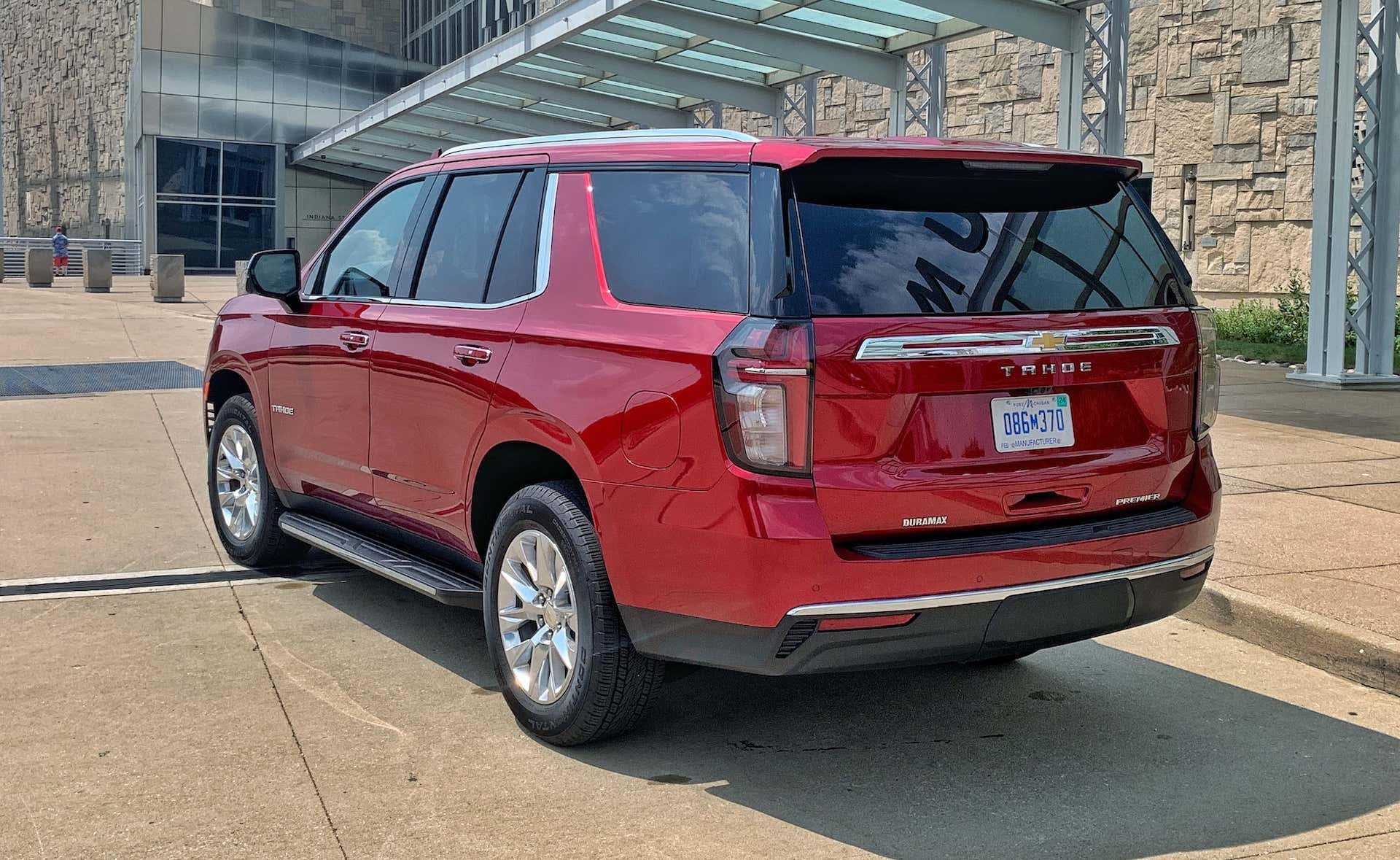 Torque is your friend in big SUVs, and even though the Duramax makes the same 460 pound-feet as the more familiar 6.2-liter, it’s how it delivers the twist that sets it apart. See, this isn’t some clanging oil burner that wreaks of fumes and has you cycling the key to start it on a cold morning; heck, it doesn’t even have a turnkey ignition. Instead, it’s a refined power plant that eats up road trip miles while still getting 26 mpg on the highway—take the EPA’s word for it, not mine.

Our Managing Editor Jerry Perez drove the diesel-powered Tahoe from Indy to Wisconsin over the summer, hauling his family and roughly four dozen suitcases. That’s an exaggeration, but you know what’s not? This is the best version of the best SUV on sale right now. As a $995 optional extra, it’s worth it every time.

Hardcore Doesn’t Even Begin to Cover It: Lamborghini Huracan STO

I haven’t driven or even seen a Lamborghini Huracan STO in person. They’re exceedingly rare, as you might imagine, and as writer Chris Tsui tells me, it’s straight wicked on public roads. 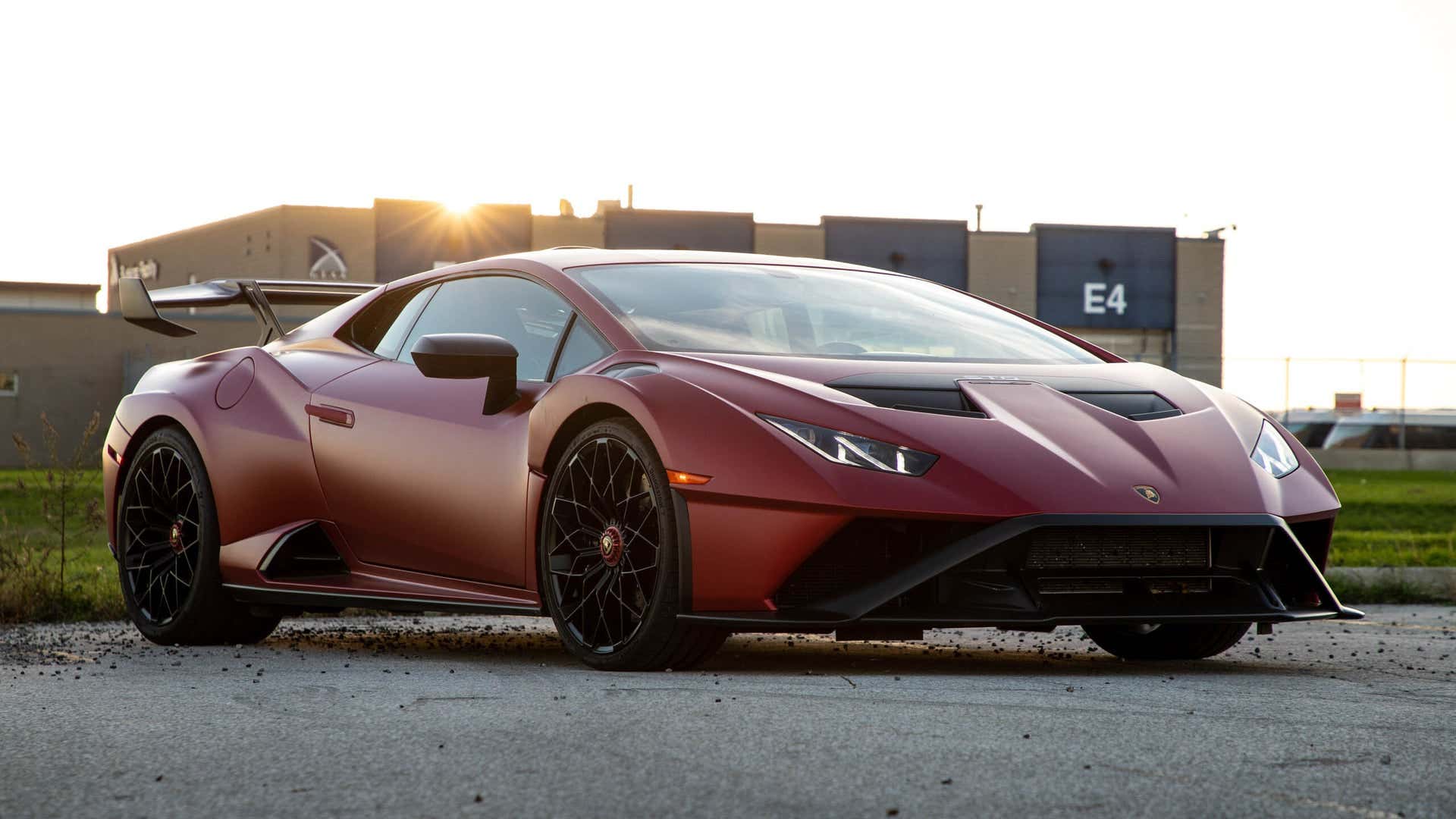 Again, that might not be the most surprising thing given its track suspension, wildly intense aero kit, and incredibly touchy V10 that makes 631 hp at 8,000 rpm. He did a good job of summing it up with this line:

“Driving the Huracán STO around town to run errands, then, is a bit like wearing scuba gear on a simple fishing trip. You could do it, I guess, but it’s overkill, mostly uncomfortable, and there aren’t nearly enough pockets.”

I drove this one and I stand by my statement: the Ford Maverick is a bonafide truck. If you’re still worried about its unibody platform, then you haven’t driven one—and you definitely haven’t worked one. I drove the less-powerful hybrid model with a pallet of mulch in the bed and it still gained speed up Tennessee’s steep hills. 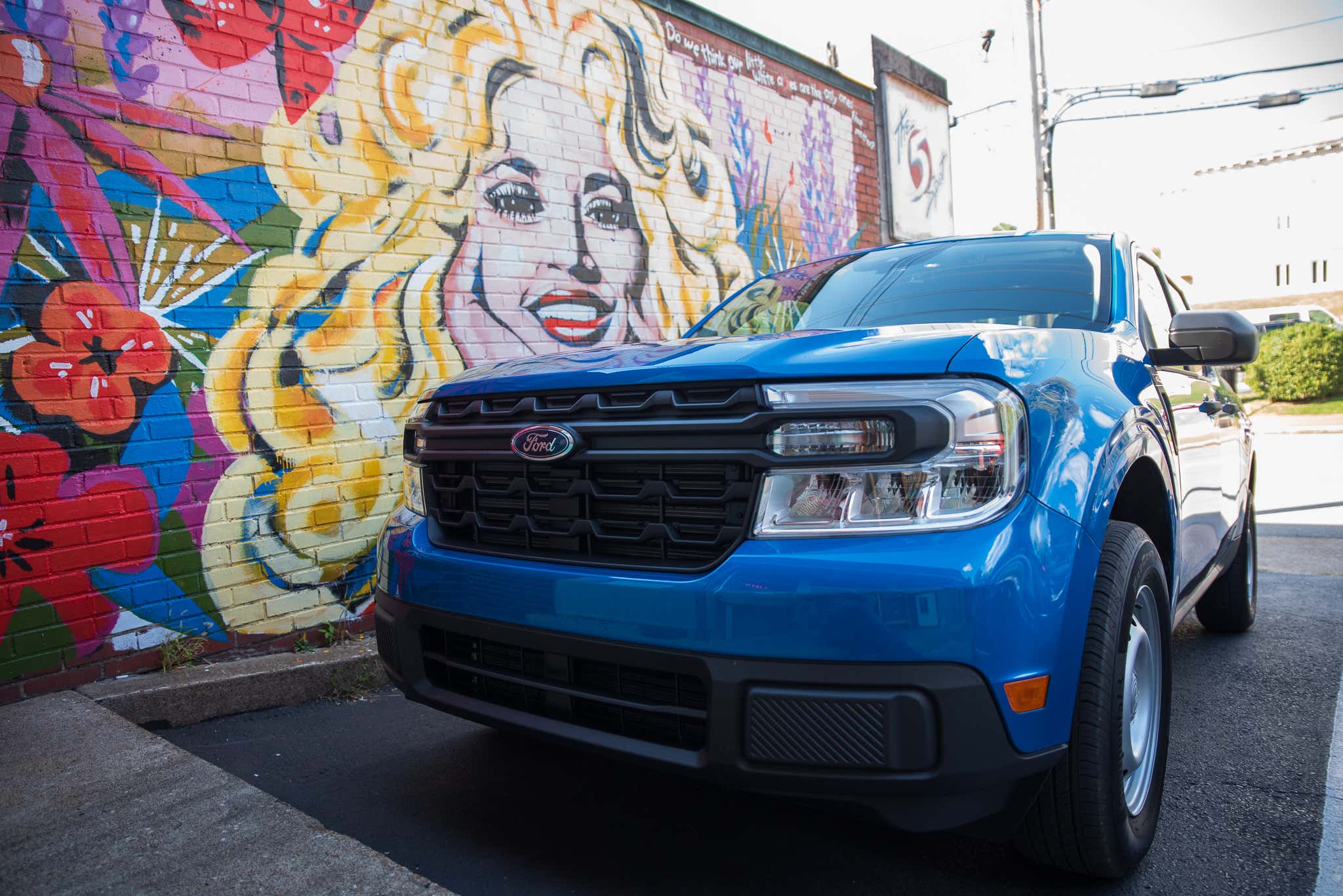 Whether it’s lowered, lifted, or left exactly how it comes from the factory, the Maverick is a winner. That argument’s only supported when you look at the hybrid’s 42 mpg rating in the city, which is just plain unheard of for a pickup.

I dig it so much that I’m really considering one as soon as all the order hullabaloo calms down.

I know the Escalade shares a lot of parts—including its very platform—with the Chevy Tahoe I mentioned further up. That alone should tell you why it’s good to start with, but it’s included on this list for a different reason. I’m talking about its Super Cruise driving assist. 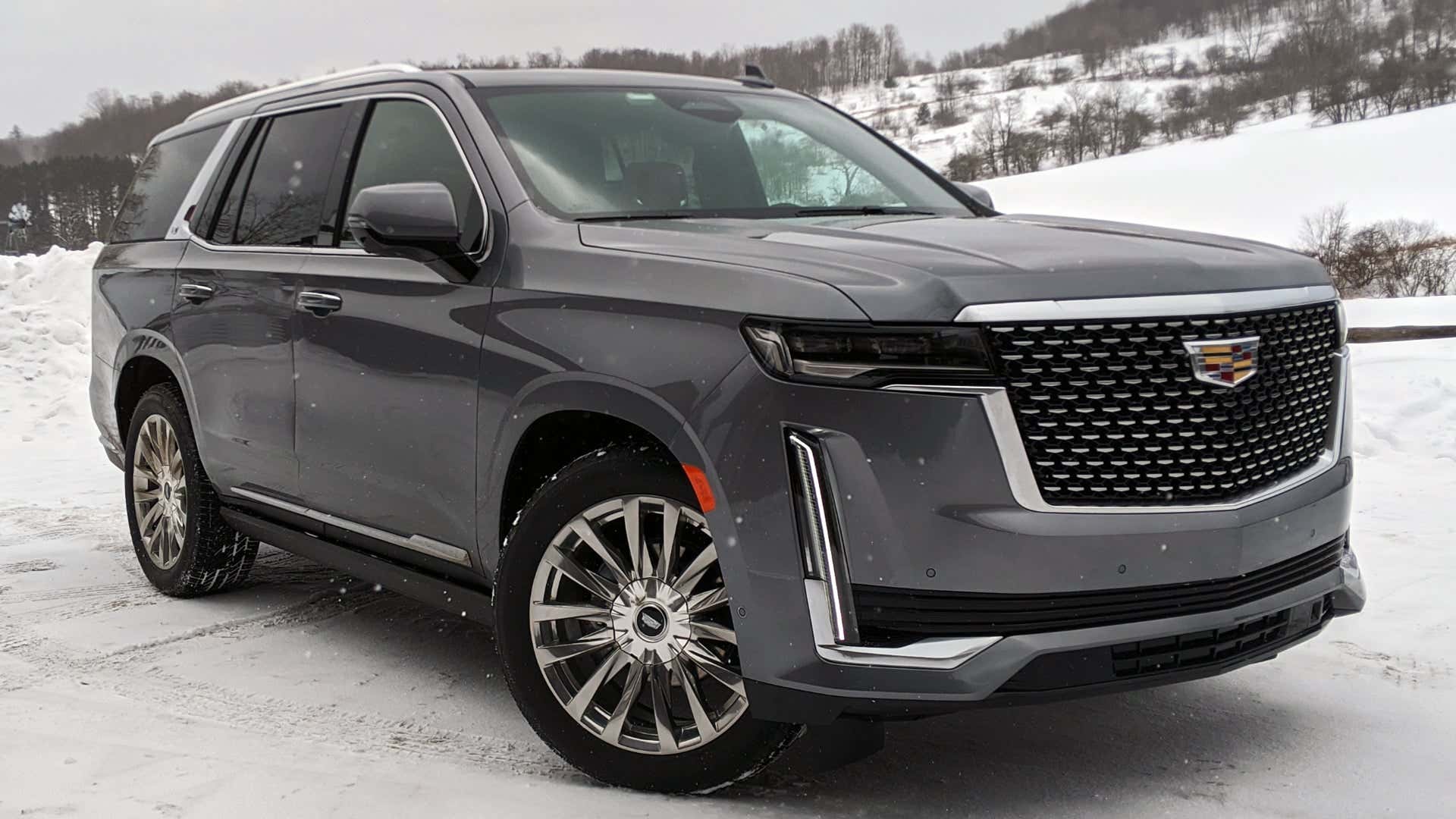 Or, rather, Staff Writer Peter Holderith is in his review of the car from January. The Escalade reclaims Cadillac’s “standard of the world” title thanks in large part to how well it can drive without any hands on the wheel. As the car navigates any of the 200,000 miles that have been pre-mapped into its system, you can really take the time to appreciate its interior. The screens in there are actually awesome, and the materials are better than we’ve come to expect from GM in recent years.

Moving past that mouthful of a name, this Porsche Taycan Turbo S Cross Turismo is a dream-mobile. I’m sorry, I meant to say, “This Parsh is a dream-mobile.” That’s my best impression of our social media editor Stef Schrader, who actually drove the thing on Germany’s autobahn. 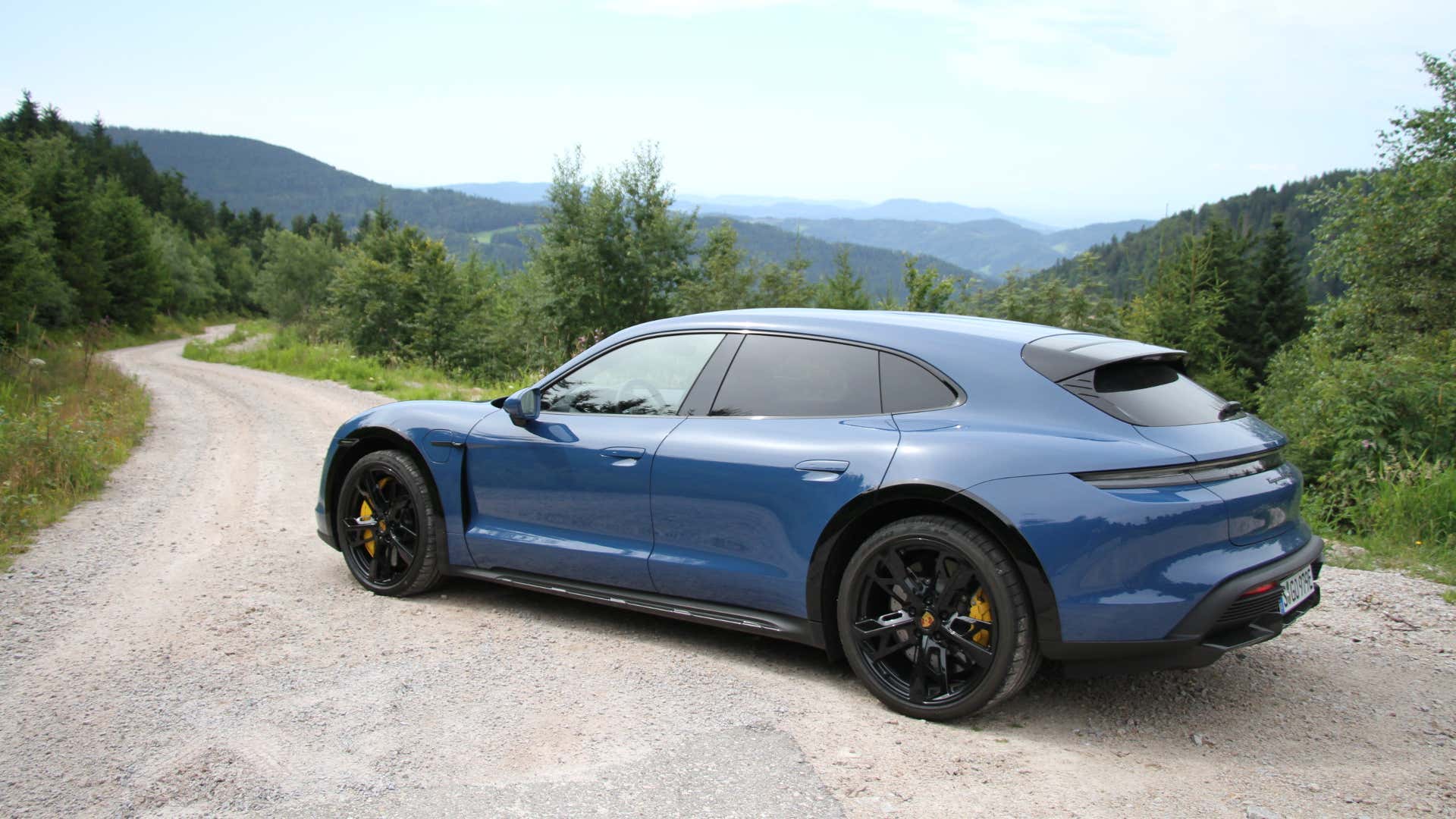 The numbers are impressive—numbingly so, almost. The Stuttgart EV makes 616 hp and 774 pound-feet of torque, and all-wheel-drive means it can do the boot-scootin’ boogie on just about any surface. It’s super quick, super stylish, and super pricey at $250,000 for the model she tested. That’s a lot, but then again, what did expect from the top of Porsche’s forward-charging EV line?

That’s it for us this year. What’s the best thing you drove in 2021, and what are you excited about for next year? Let us know in the comments.