Infiniti had a jumpstart on the heavily-styled crossovers with its FX-series debuting nearly 20 years ago. What the style-forward crossover lacked in cargo space, it made up for with hilarious engine selections, including a 5.0-liter V8. While the FX might have been ahead of the curve, Infiniti is hoping its latest entry into the style-forward crossover battleground hits closer to the trend’s peak. Dubbed the Infiniti QX55, this new model is obviously an offshoot of the QX50 crossover.

Since this is effectively a QX50 coupe, it shouldn’t be a surprise that the QX55 is significantly similar to that model. Powering the QX55 is the same variable-compression, turbocharged 2.0-liter inline-four-cylinder. This interesting engine makes a reasonable 268 hp and 280 lb-ft of torque, traveling through a continuously-variable transmission before hitting the standard all-wheel-drive system. It’s worth noting, the standard-issue QX50 does not come standard with an all-wheel-drive system.

The styling is similar to the standard QX50, save for the revised rear giving it the coupe-aesthetic. If you’re wondering, yes: this does reduce your cargo space. Though the reduction isn’t as bad as you’d imagine. With the second-row seats up, you can fill a QX50’s 31.4 cubic feet with suitcases and cargo. That shrinks to 26.9 cubic feet with the QX55, so effectively reducing capacity by about a suitcase. 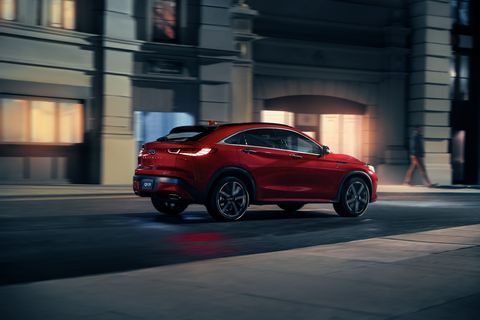 As for the rest of the interior, it’s about the same as the QX50’s. That’s a good thing. Handling infotainment duty is a two-screen system in the middle of the dash. Making life easier for those that don’t carry cords with them everywhere, Infiniti adds wireless Apple CarPlay to the QX55 for no extra charge.

Infiniti is spreading the QX55 across three trim lines: Luxe, Essential and Sensory. That follows the lines found on the QX50, except for the missing Pure line at the entry point and the range-topping Autograph models. It wouldn’t be a huge surprise to see both of those trims enter the QX55 later down the line.

The QX55 is set to hit your local Infiniti dealership in Spring 2021. Pricing is likely to follow closer to the actual release date, but it’s safe to say the 55 will carry a premium over the standard QX50. With the QX50 Luxe starting at $42,525 including destination and delivery fees, it wouldn’t be a surprise to see the QX55 start around $45,000.