All-wheel drive and turbocharging’s near-simultaneous introduction to rally turned the sport into a rival for Formula One almost overnight, and everyone—even the Soviets—wanted in on the fun. Not every entry was a successful one, though, and at least one carmaker’s Group B campaign went down in flames. One company seemingly scared of such embarrassment was Mitsubishi, which waited so long to homologate its own, Starion-based rally car that Group B was over before it was ready to race.

First revealed as a prototype at the 1983 Tokyo Motor Show, the Starion 4WD Rally had all the trappings of the Audi Quattro that won the 1982 World Rally Championship (and nearly 1983’s as well). It had more in common with the Quattro than a two-door coupe body and turbocharged drivetrain, too; as development at newborn Ralliart was influenced by former Audi Sport UK engineer Alan Wilkinson, who was keen to rectify the Quattro’s infamous nose-heaviness in the Starion 4WD Rally. 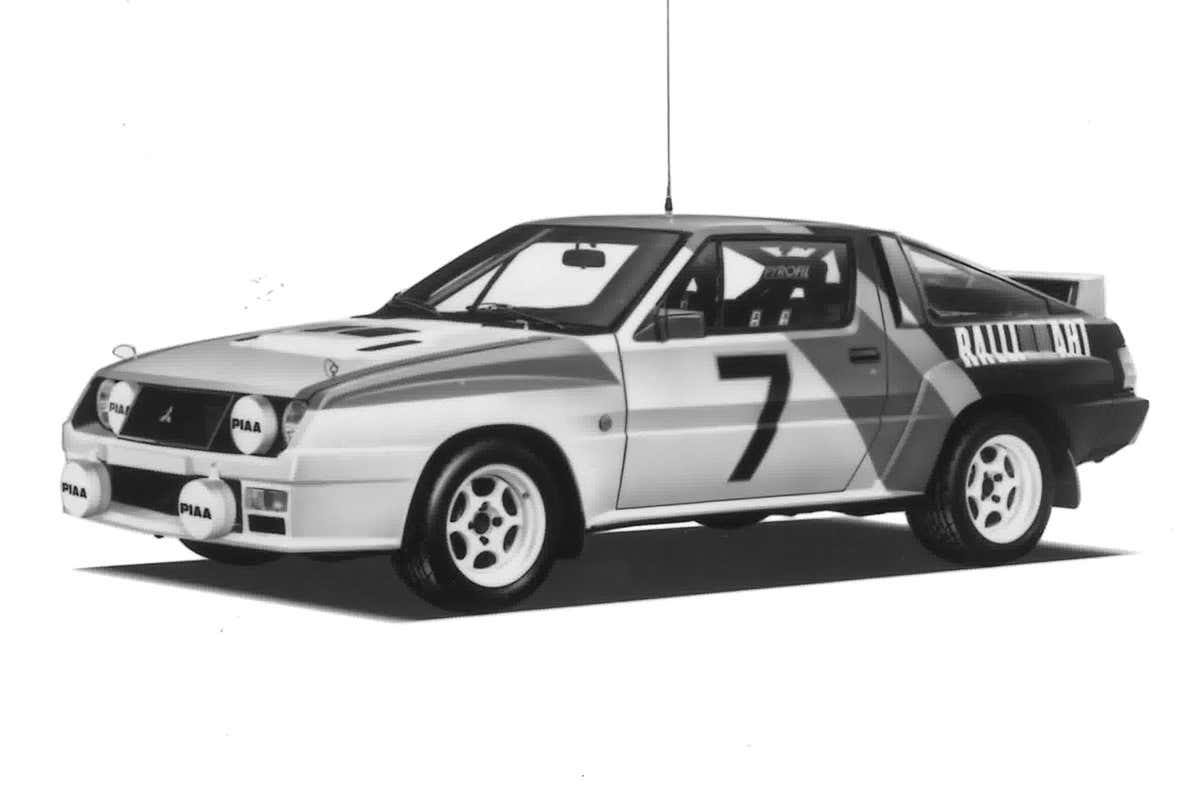 This was accomplished with an unusual drivetrain configuration, which involved mounting the Starion’s engine and five-speed transmission longitudinally and tilting it six degrees rearward to fit the front axles underneath. These sprouted not from a transaxle, but a front differential connected to a strengthened Pajero transfer case—it was a true four-wheel-drive car, rather than all-wheel-drive like its contemporaries.

Weight and its distribution received just as much attention elsewhere, too. The windows were polycarbonate, while the driveshafts were carbon fiber-reinforced polymer (CFRP), along with the lower control arms, skid plate, and seat. Between these and composite bodywork (carbon-kevlar according to GroupBRally.com), the Starion 4WD Rally prototype was estimated by Mitsubishi to weigh in at just 2,115 pounds with an empty tank.

Even its engine, an early “Sirish Dash” iteration of the now-legendary 4G63 turbo-four, was on the strange side. Half of its single-cam, 12-valve head’s intake valves remained closed below 2,500 rpm, enhancing low-end performance. Various sources indicate its engine was bored out to 2,140cc, though others say it remained stock at 2.0 liters, with both figures appearing on plaques by a surviving example. Regardless of displacement, this engine is stated on one of said plaques to have produced 355 horsepower and 325 pound-feet of torque, which would’ve been plenty competitive before Group B went bananas with boost.

Mitsubishi initially planned to enter the WRC as early as Summer 1984, though by the Geneva Auto Show that February, it had pushed its first race date back to November’s RAC Rally (today called Wales Rally GB). This, according to Auto Express, would give Mitsubishi the chance to shake down the car at that year’s Rally Mille Pistes before launching its homologation model, the Starion 4WD Sport, at October’s British International Motor Show. This in turn would drum up hype for Mitsubishi’s planned 1985 WRC campaign, which would involve entries in Portugal, Greece, Finland, Italy, and Britain. 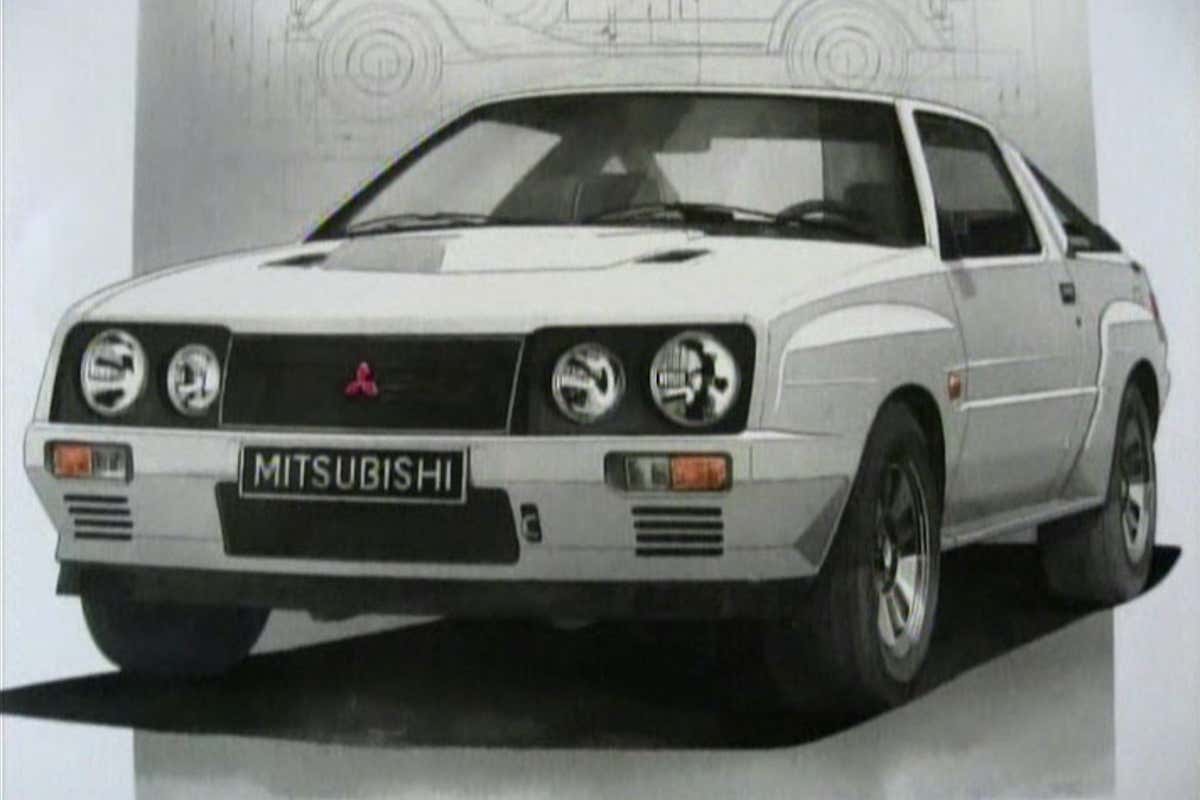 While a prototype Starion indeed ran 1984’s RAC Rally, the homologation special appears to have no-showed, and Mitsubishi’s plans to race the WRC in 1985 never materialized—development reportedly stalled. By the time the Starion 4WD Rally was ready for homologation, it was early 1986, and Group B was in what would be its fatality-filled final season. Homologation of the Starion 4WD Rally was reportedly called off, and as a result, it never bared its fangs to the likes of the Lancia Delta S4 and Peugeot 205 T16. If it had, though, things may not have gone well for Mitsubishi.

By 1986, all of Group B’s frontrunners were at best silhouette racers that resembled production compacts, while some like Ford’s RS200 were unabashedly purpose-built prototypes. Mitsubishi’s front-engined, production-based Starion probably wouldn’t have had their agility, never mind their power—assuming its horsepower output remained static.

At the time of Group B’s cancellation, the people who designed the Starion 4WD Rally must have felt like their effort was wasted, that an opportunity had been missed. They couldn’t know it at the time, but running the wrong configuration for Group B meant that Ralliart entered the Group A era with a wealth of knowledge of front-engined, all-wheel-drive cars. This channeled into the Galant VR-4, which in 1989 won Mitsubishi its first two WRC events, surely encouraging it to stick with the WRC—a decision which would be handsomely rewarded in the 1990s.

During these, Mitsubishi’s golden rallying years, the Lancer Evolution powered Tommi Mäkinen to four consecutive WRC drivers’ championships, the third of which brought Mitsubishi a manufacturer’s title too. This rallying legacy was unquestionably built on the foundation that was the Starion 4WD Rally, whose designers, decades after the fact, surely take some pride in what they set in motion. 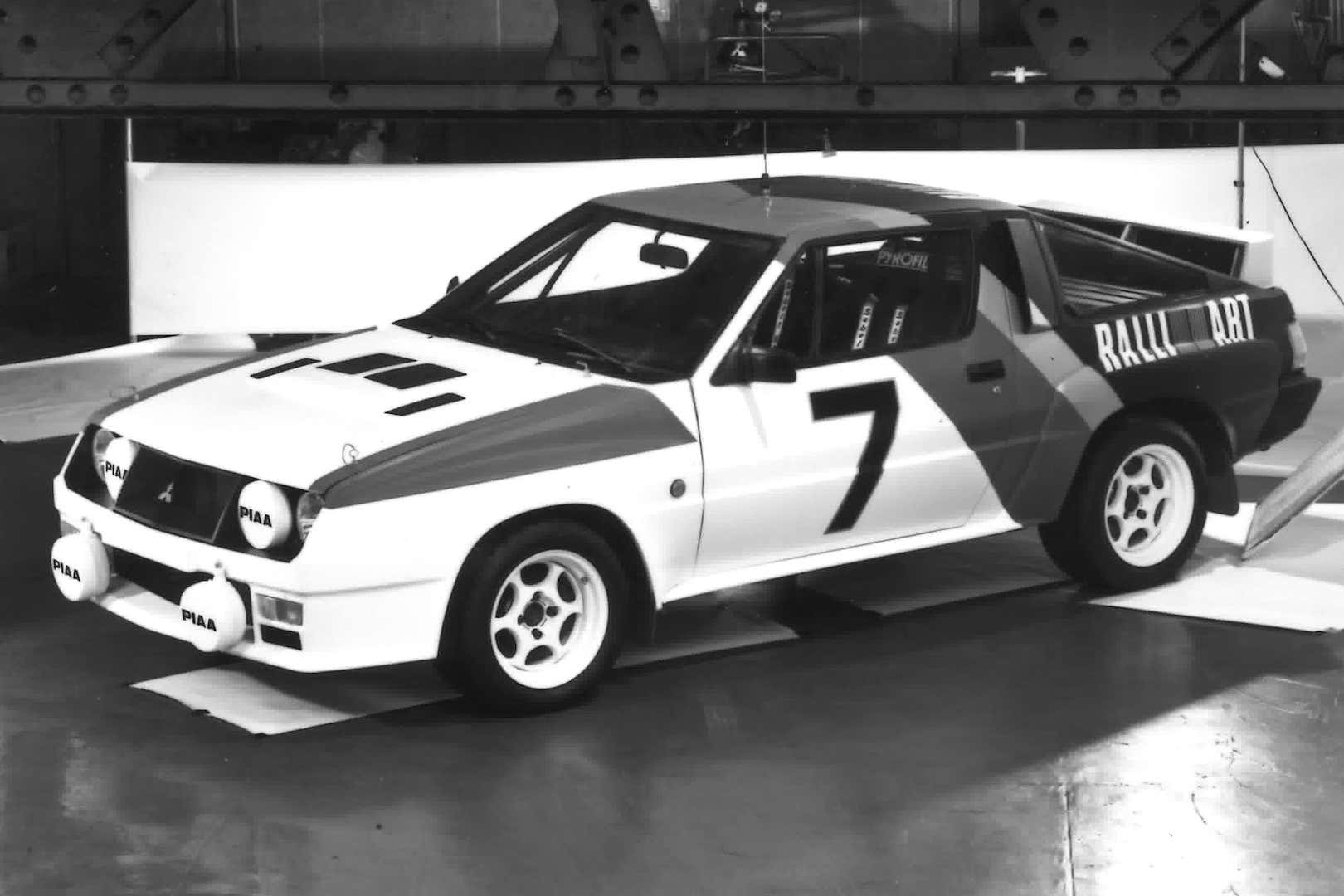 And while the motorsport world never sang the Starion’s glories, the unrealized rally car still cultivated a small following, at least one member of which hired former Ralliart engineers to assemble a replica according to Rally Group B Shrine. It’s not an exact clone, being rear-drive rather than four-wheel-drive, but it needn’t be a perfect recreation, because the originals are still around—three of the five according to Rally Sport Mag. Thirty-five years on, maybe it’s time one of those Starions be let out of storage to stretch its legs. There are less appropriate times than the resurrection of Ralliart for that, no?