The Simple Pet four-piece pet protection kit was the best-looking car seat cover for dogs on the shelf at my local Walmart, so I grabbed it in a pinch. If you find yourself standing in that same aisle wondering if this product is worth the $40-odd asking price, my short answer is yes.

There are two main categories of car accessories for dogs: Safety devices designed to secure the animal and covers designed to protect the vehicle from dirt and claw marks (like this one). You can divide the covers even further between hammock-style ones that effectively cover everything but render the seat unusable to humans (by making a hammock that hangs over the rear seat) and more standard seat covers that go along with the vehicle’s interior flow — of those, this is the latter. You can still use the seat as a person seat with this cover in place. 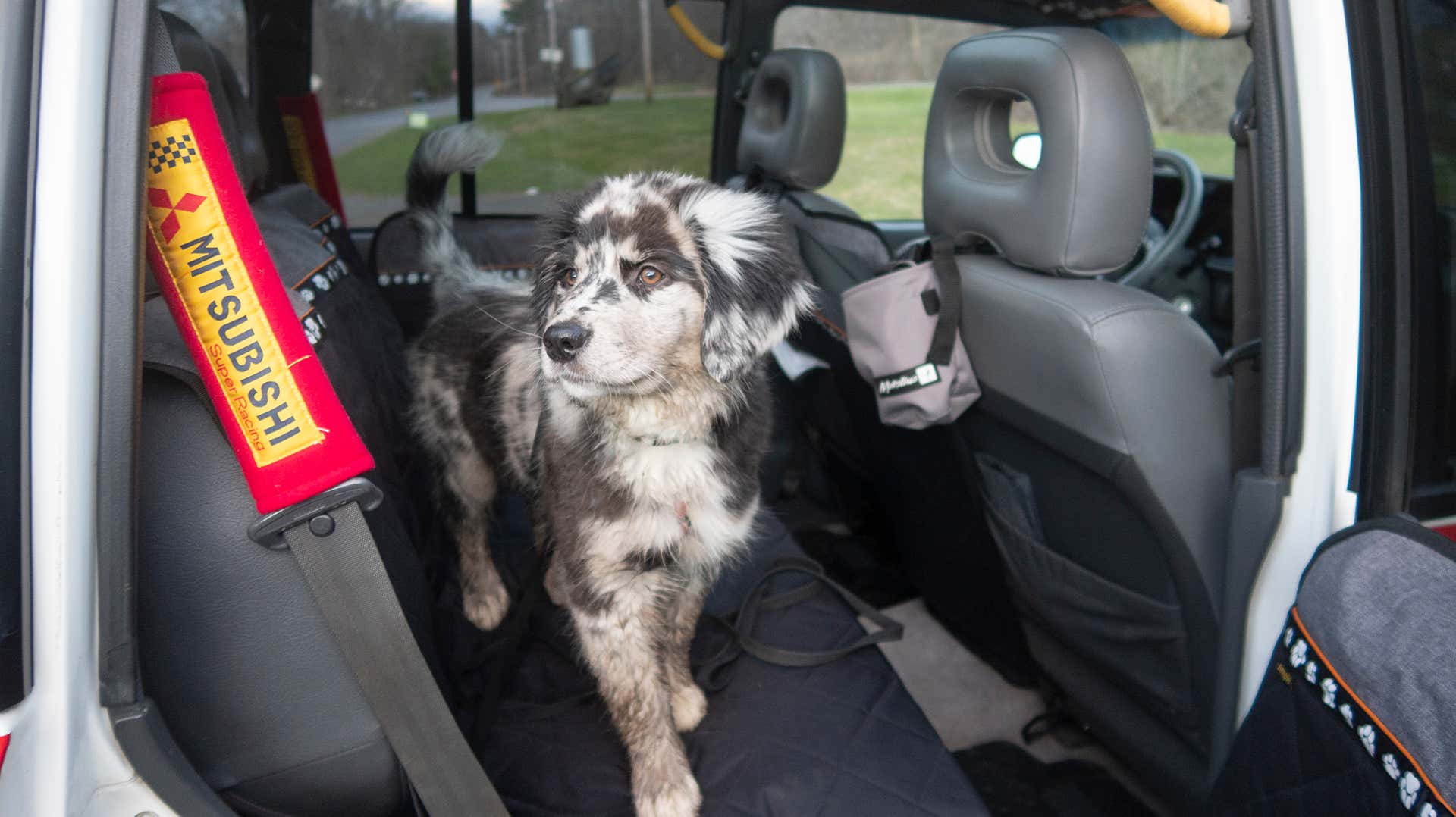 This kit physically protects your car’s three most-vulnerable interior surfaces from stains and scratches marks a dog might leave: The back seat itself and the two door cards. The fourth element, a clip-in barrier that goes between the front seats, effectively protects the entire front area of the car by preventing a dog from climbing over the center console.

Here’s a closer look at the clips that hold the cover to the bench seat and the barrier to the front seats: 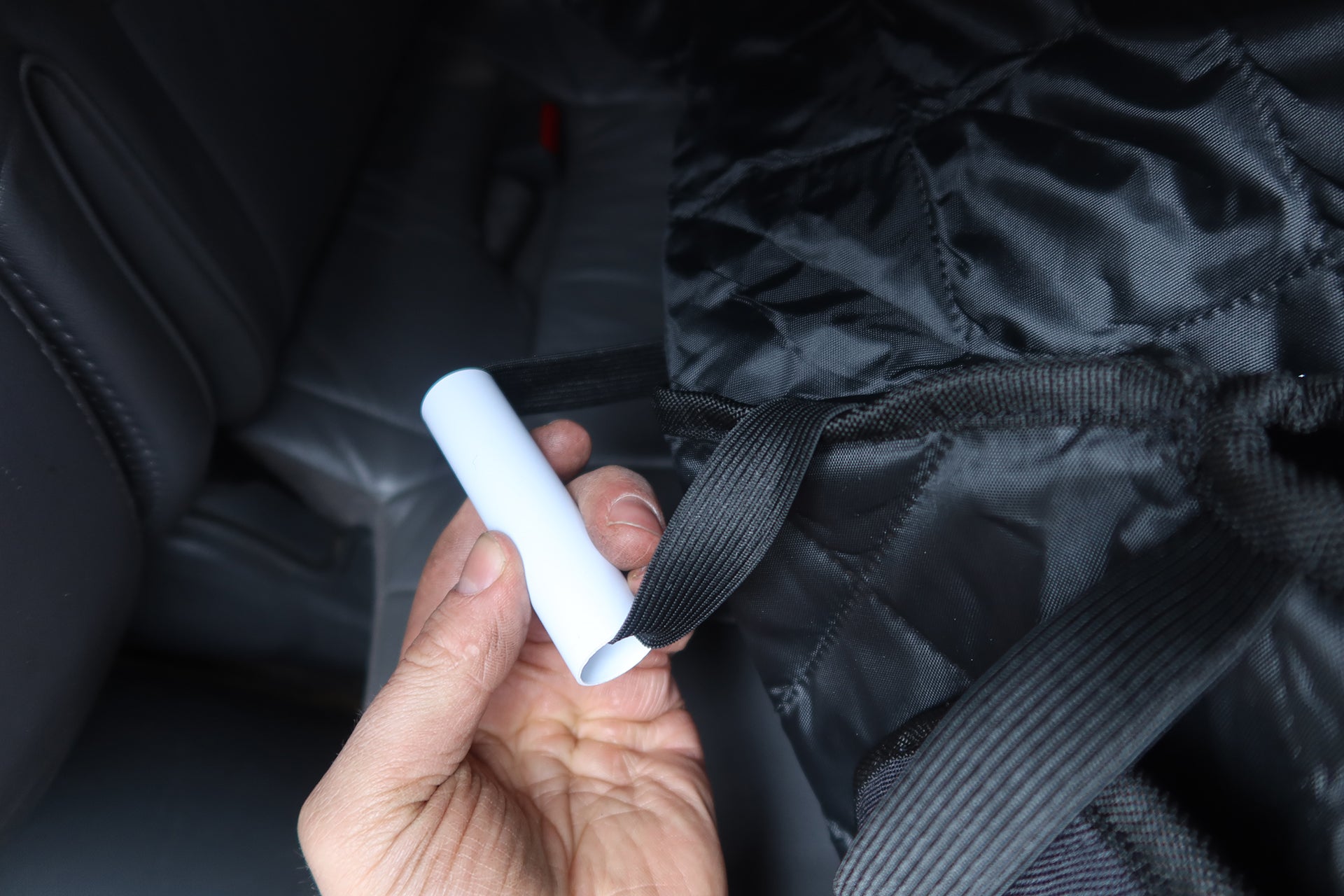 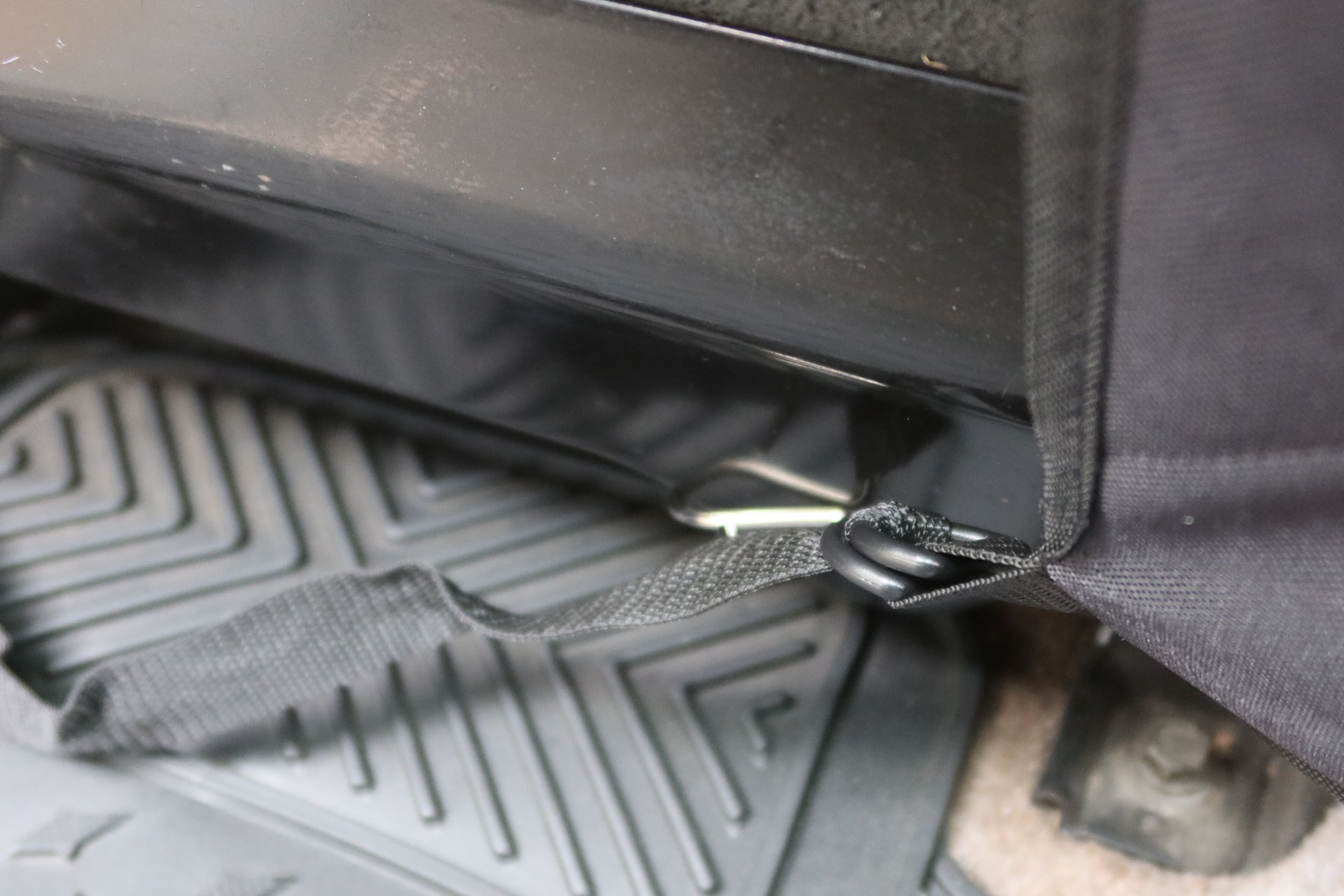 Understand that this “pet protection kit” is designed for protecting your car from your pet, not for protecting the pet themselves. It could (and really, should) be used in conjunction with a dog seat belt or dedicated dog car seat, but on its own, its value as an animal safety device is minimal.

That said, the barrier deterring a dog from sitting up front helps keep it contained (a plus for safety), and the small amount of padding the Simple Pet kit adds to the doors should spare a dog some discomfort if it gets jostled against the doors as it might in regular driving.

What’s Included in the Box

You get a bench-style rear seat cover with detachable clips that hook behind the headrests, Velcro-opening slots to access seat belts and plastic retainers that help keep the butt of the seat in position. You also get two covers that attach to the doors two ways (we’ll go over that in a second) and a partition that goes between the front seats. 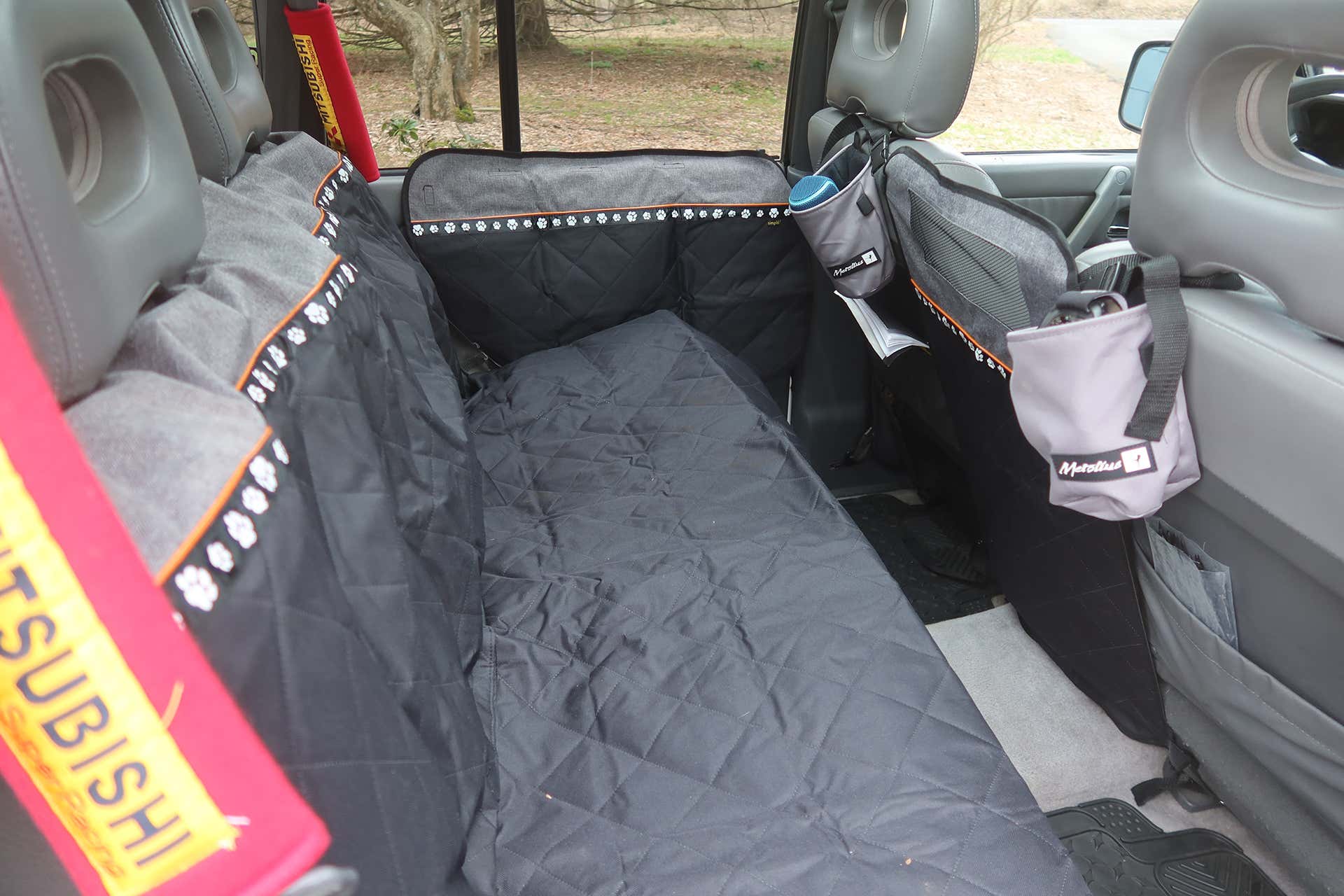 Here’s a closer look at how those door covers go on: 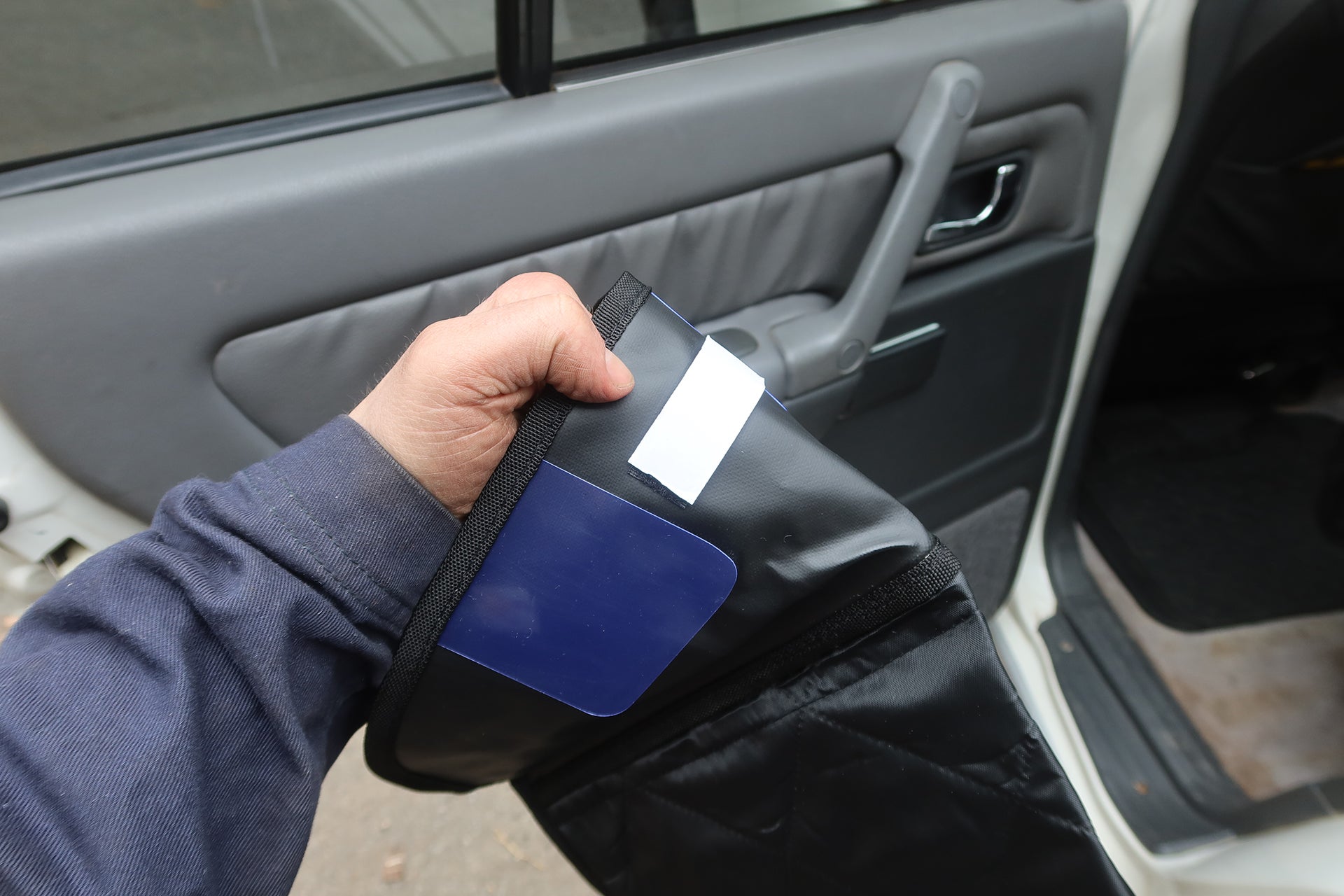 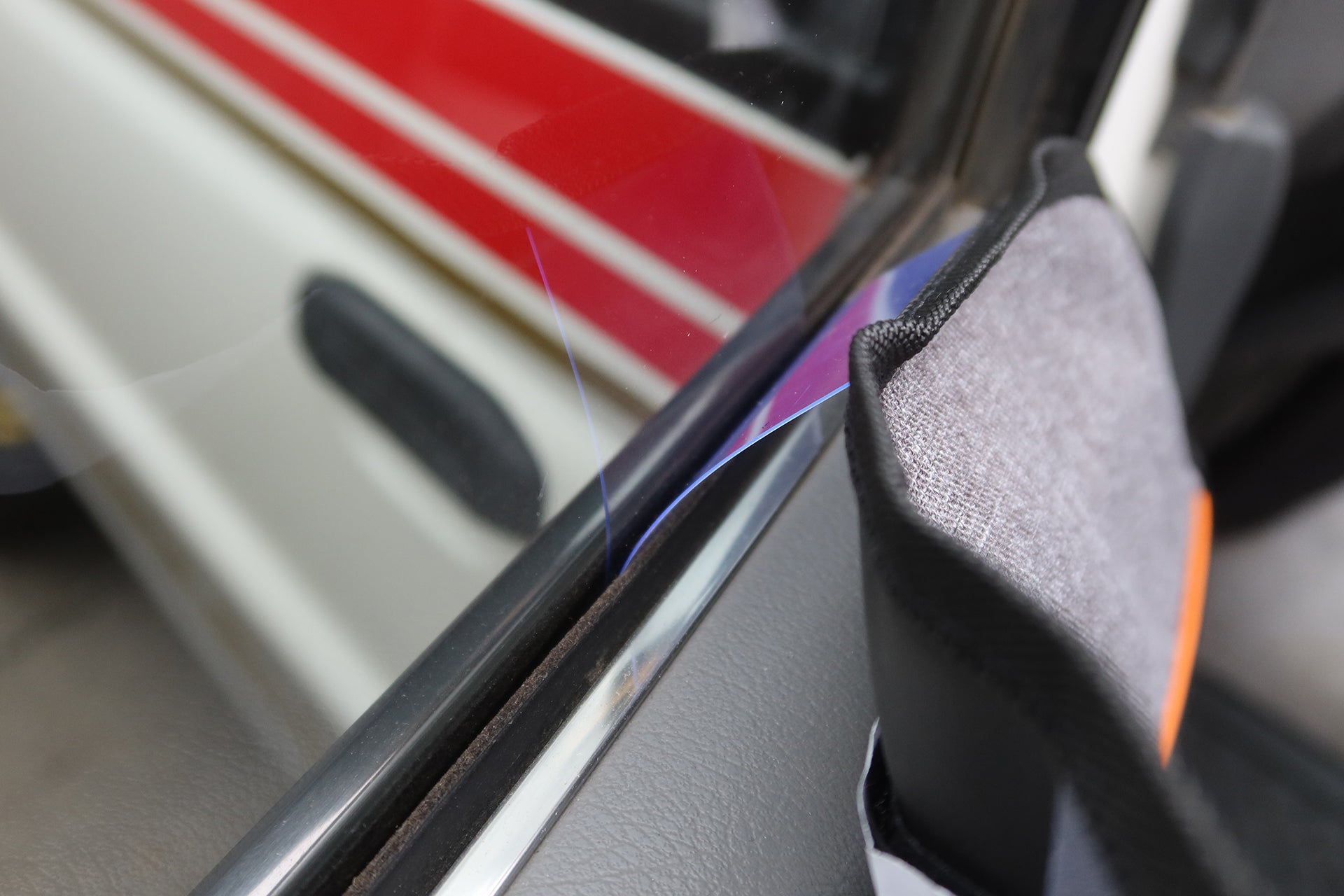 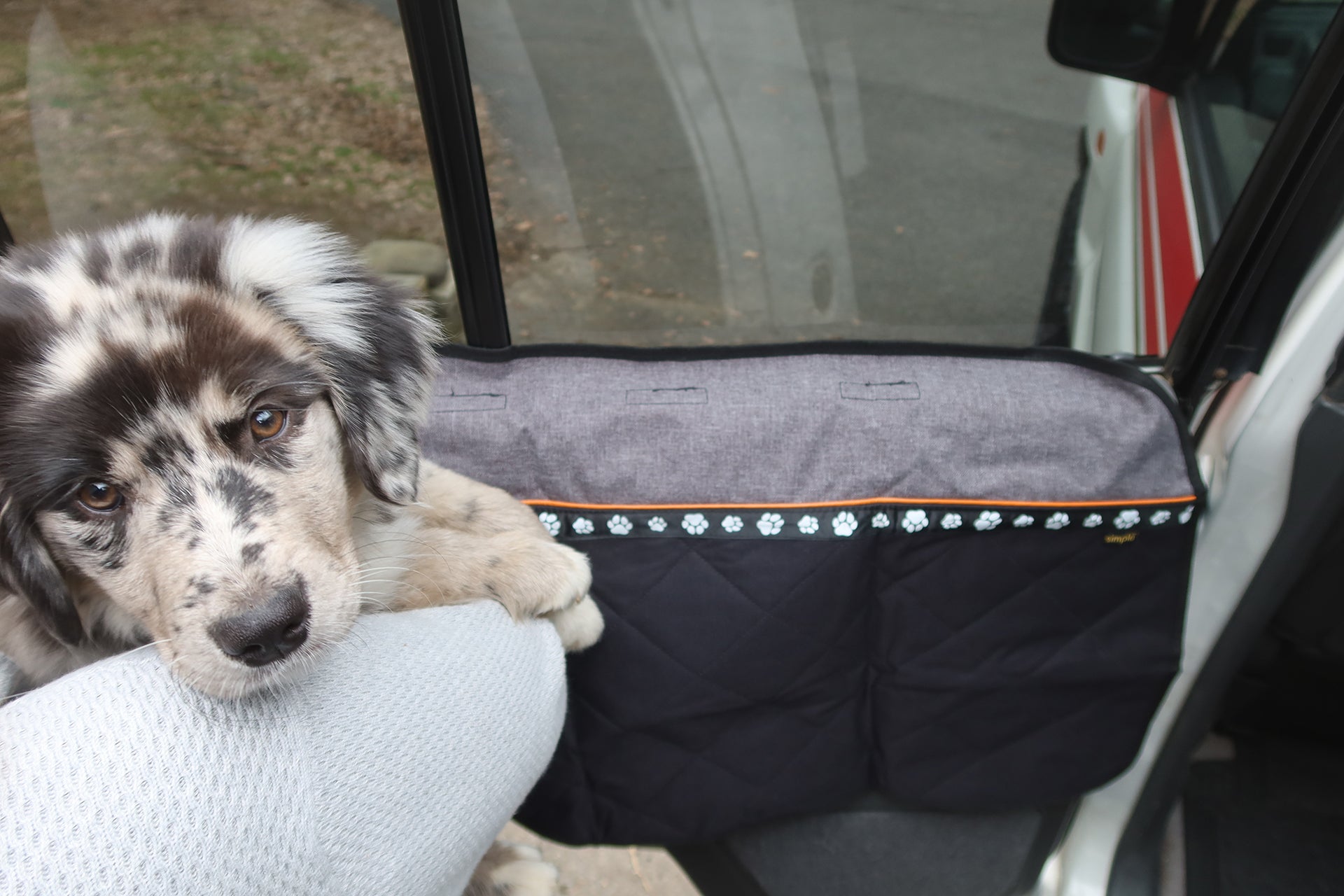 Printed instructions with illustrations are also provided, with captions in Spanish and English.

You’d think an instruction manual for a seat cover would be almost redundant, but I did appreciate the annotated diagrams to make sure I had everything facing the right way. If you’re fastidious like me, you’ll want to take your time to get the cover to lay as smooth and flat as possible.

I put this in my 1998 Mitsubishi Montero, and the back seat area of that vehicle is actually somewhat small. With that in mind, I wasn’t surprised that this cover too a little work and wiggling to lay flat — I think you’ll have an easier time getting it taut in a larger modern SUV.

The door covers attach through little tabs that go into the window channel and included stickable Velcro. I was not about to stick random Velcro bits onto my beautiful door cards, so I just used the tabs on their own. So far so good, though they add some friction to the window process. The old window motors in my Montero were slowed down considerably by this added drag, so I’ll be keeping the glass rolled up. 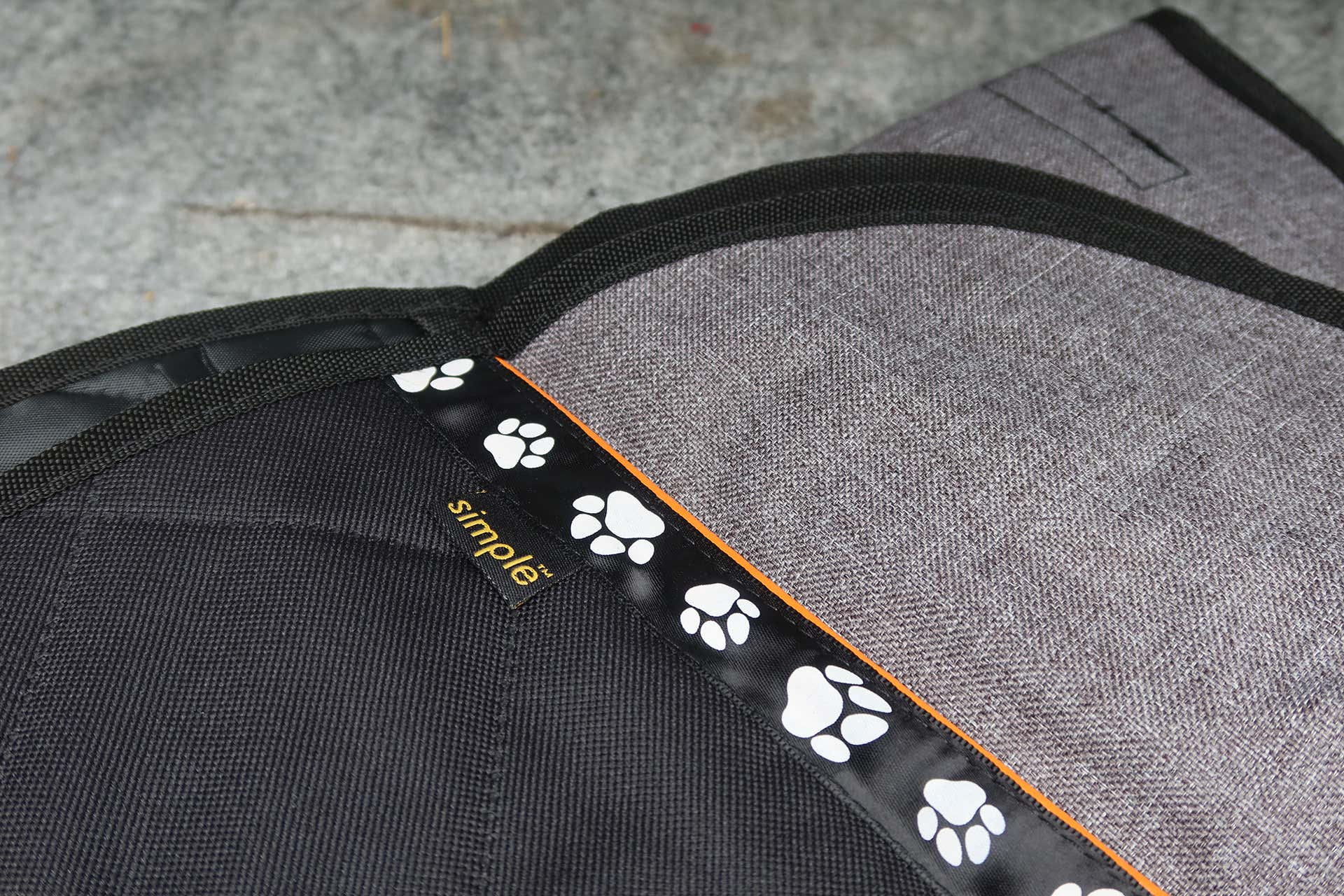 Walmart advertises this product as a “Heavy Duty Pet Protection Travel Kit” and there is a reasonable amount of robustness to it. All the clips and straps are sewn together well enough to look like they can take abuse, and they mostly get tucked out of the dog’s view once installed.

The main animal-contact surface has some quilting to it that reminds me of the inner lining of a hardcore winter work jacket. I’ll stop short of saying this Simple Pet setup feels as solid as a high-end Carhartt coat, but I’d be confident putting any Golden Retriever-sized or smaller dog on it without thinking the pooch would pierce the cover.

Even with something immense like a Newfoundland or Akita, I would be surprised if their claws broke through this as long as they were sitting normally, not digging at it. Speaking of which — all the straps and clips get tucked out of the dog’s view pretty well with this thing, so there will be minimal temptation for an animal to start attacking (or even notice) the seat cover. The straps securing the barrier between the front seats could look a bit more appetizing, though. So take care to tuck those if your dog likes to chew on straps. 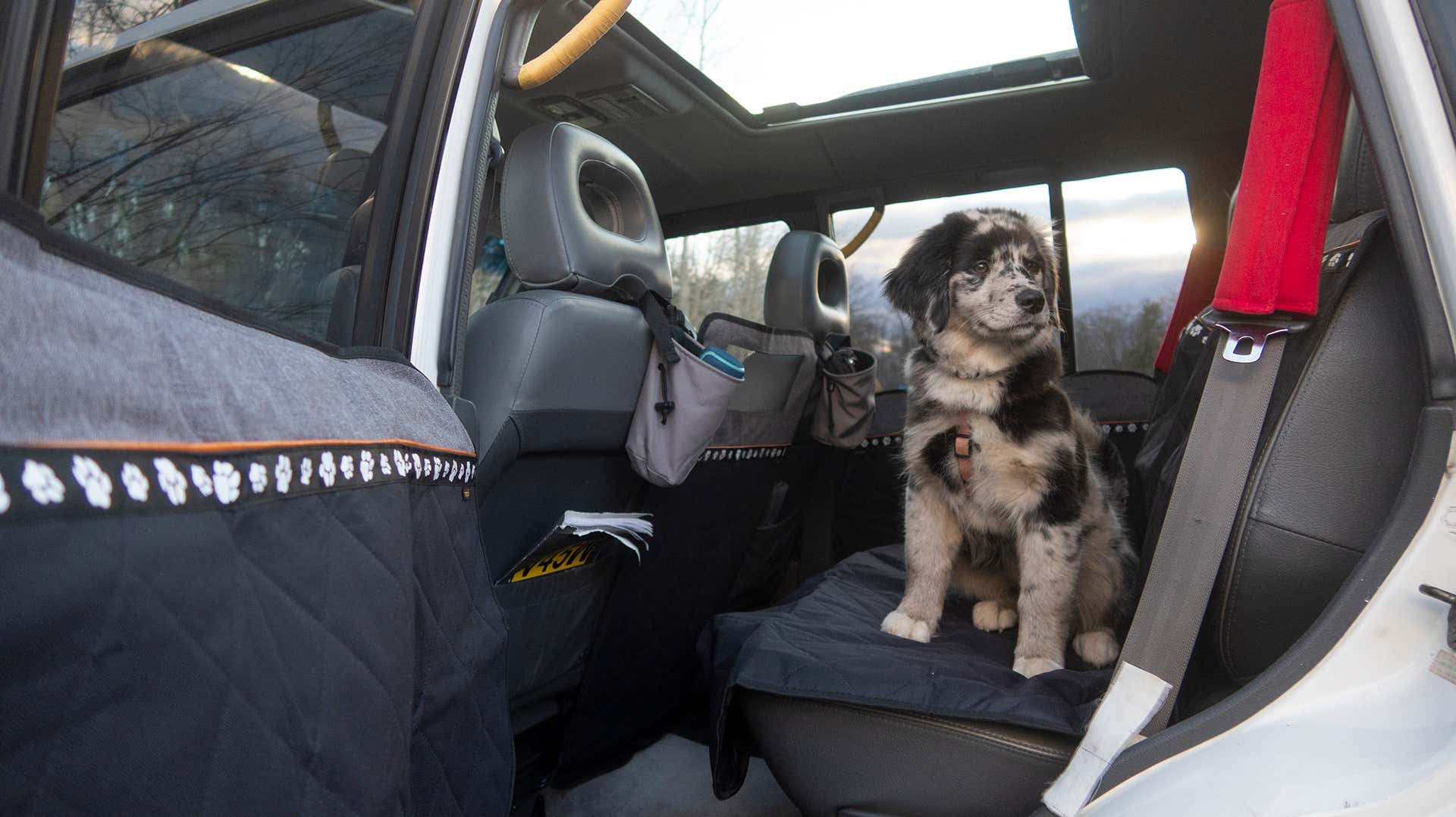 My dog Bramble is an Australian Shepard/Golden Retriever mutt who is about 22 pounds and three months old at the time of these photos. She loves chewing hard things and will go out of her way to get as filthy as possible if the opportunity presents itself. As such, I was quickly able to test two critical factors of this dog protection kit: How well it hides mud and how well it deters a dog from climbing into the cockpit — good performance on both accounts. 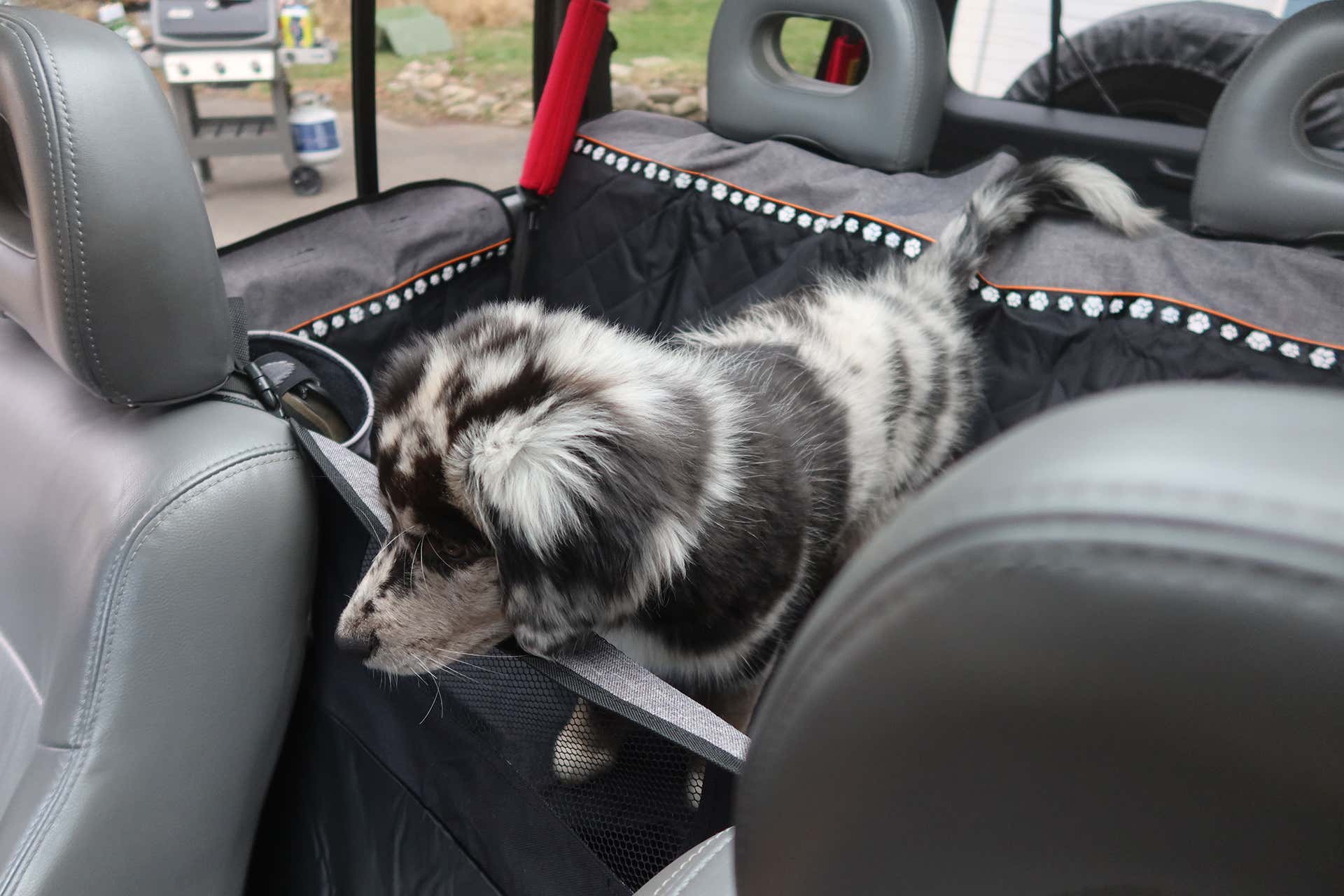 I took Bramble down the road to one of her favorite trails right after a huge rainstorm, and not only did she charge through dozens of puddles, but she actually waded chest-deep through some swamp and emerged coated in muck and algae. I had her shake off and roll in some grass before boarding the truck for her ride home, but she was still pretty gross when she got back onto the seat cover, and it mostly still looked reasonably nice when I let her out. Like, it was nice enough that I’m not inclined to bother cleaning it yet.

She loves attention and often tries to climb into the front seats of cars when she’s going for a ride but did not attempt to scale the Simple Pet barrier (though she did investigate it). That was worth $40 alone as far as I’m concerned. 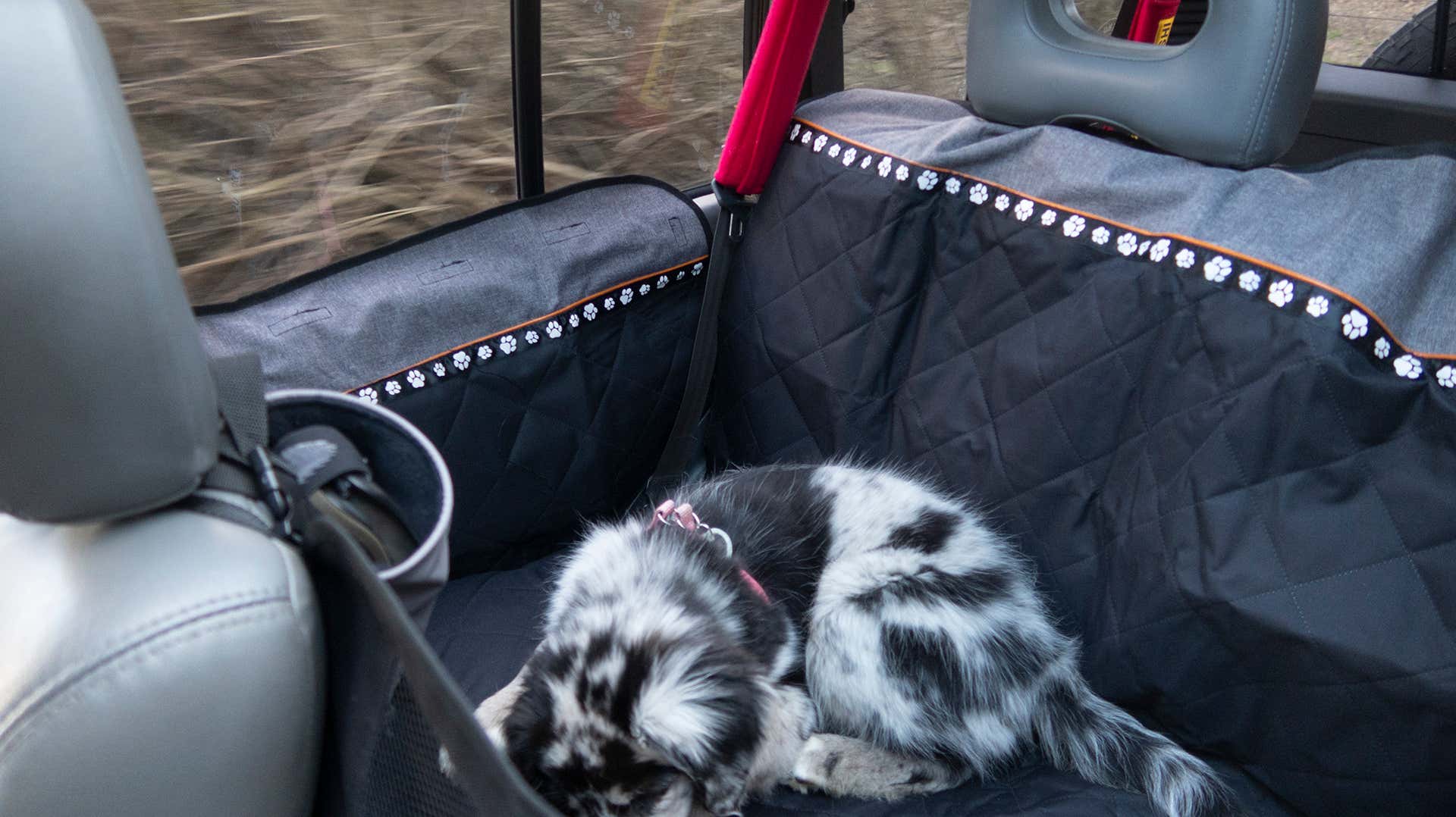 To my surprise, Bramble has no interest in sticking her snout out the window of a moving car. I feel like that’s a classic dog move… maybe she’ll grow into it? But I will add some comments later about the durability of the door covers.

Best Uses for This Kit

This kit is optimal for short trips because unlike hammock-style dog seat covers that attach to the front seat headrests, this one doesn’t interrupt normal entry and exit to the rear seat area. It’s very easy to just open the door and plop your dog in. I also like how it feels comprehensive without being in the way — you could very easily sit next to your dog, or just use the rear seat as normally without taking this cover out if you didn’t feel like it.

Where the Kit Is Lacking

The four-piece Simple Pet kit does not cover the back of the front seats, so if you’re worried about your dog scratching those, you’ll need to keep shopping. This kit does not offer any protection for the floor area, either. I run rubber all-weather mats in my truck so it’s a non-issue for me, but it’s worth noting.

I’ll also reiterate that this kit is designed to protect your car, not your dog. Most of Bramble’s driving is on short, local trips on sparsely populated rural roads so I have not researched or equipped a proper dog seat belt yet, but I will in the very near future. Once we start doing anything more than five-minute drives at 20 mph, I’ll upgrade her safety situation. We’ll be testing and reviewing at least one true dog restraint system in the future, so stay tuned for that.

This is a solid dog seat cover that’s easy to integrate into your vehicle. It’s a good balance between toughness and easy usability that doesn’t get in the way.

If you’ve read this far, you must be really interested in optimal dog seat cover performance and I hope you’ll leave some insights in the comment section. This Simple Pet four-piece protection kit is by no means the ultimate dog accessory, but I’m happy with the level of quality, looks, and performance I’ve gotten out of it for the $43.57 I paid.

Let’s Talk: Comment Below To Talk With The Drive’s Editors!

We’re here to be expert guides in everything How-To and Product related. Use us, compliment us, yell at us. Comment below and let’s talk, y’all! You can also shout at us on Twitter or Instagram! 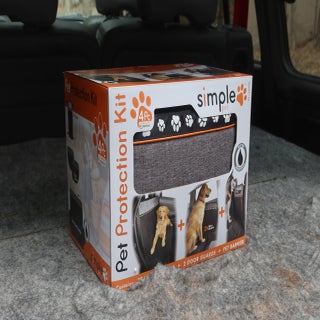 This is a solid dog seat cover that’s easy to integrate into your vehicle. It’s a good balance between “feels tough” and “doesn’t get in the way of normal car usage.”