If you’re into absurd yet functional engine swaps, you might be familiar with the YouTube crew at Rich Rebuilds. The maniacal mechanics have done just about everything you can to a Tesla, including building a V8-swapped Model S that they affectionately named “ICE-T.” But clearly, one combustion engine swap wasn’t enough.

Instead of another gas-burner, though, they’re building a diesel-powered dually called the “Model D.” We already knew Rich Benoit and his team were working on something like this, but a few more interesting details have come to light with new videos that reveal exactly what he’s up to so far. 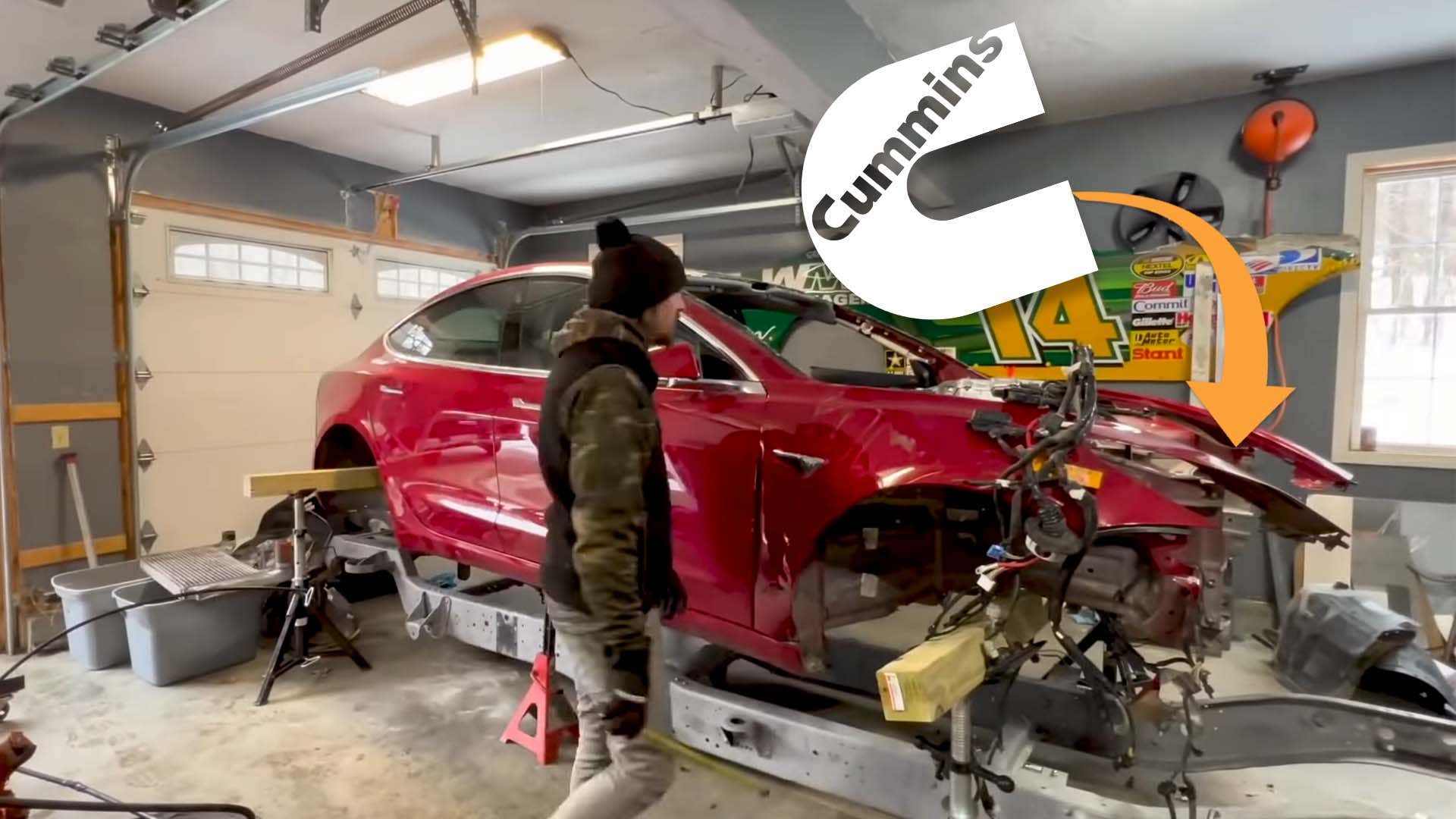 The name is a play on the wrecked Model 3 that Benoit purchased to chop up. He also traveled out of state to find the perfect engine and transmission donor: an old bread truck with a 4BT Cummins diesel engine and a manual transmission. Benoit says this approach of a more mechanical build leaves less to go wrong—a “back to basics” approach, if you will.

Now, a stock 4BT Cummins is no powerhouse. The compression-ignition lump’s factory output measures 150 horsepower and 265 pound-feet of torque. It’s not clear how many miles are on this particular example, either, or how much power it has lost over the years. Rich Rebuilds co-host Steven Salowsky told me that they plan to equip the engine with bigger heads, a larger fuel pump, and a higher flowing turbo. After all, who doesn’t want more power? Underneath the Model 3’s body will be a proper truck frame sourced from a Chevy Squarebody pickup. It’ll sport dual rear wheels, which Salowsky estimates will help the Model D tow somewhere around 15,000 pounds.

He added that the biggest challenge so far has been mating the Model 3’s body to the Chevy frame; they simply weren’t made for one another. First, the Model 3’s unibody must be cut into so that the frame can be flush with the floor in the center; however, that affects the shock mount in the front trunk area. There were also several feet of frame sticking out past the rear bumper that fabricator Joshua Dodge quickly corrected by chopping it off. The Model 3’s firewall is also a little lumpy and will be welded flush when the transmission tunnel is cut out in order to fit the diesel engine.

This project will probably take a while to complete; the LS-swapped Model S was under the knife for around a year. The process for this one isn’t likely to be any quicker, especially since it’s more mechanically involved to mount a frame to a unibody vehicle. Factor that in with the task of retrofitting a combustion engine into an electric car and you’ve got yourself a mighty tall task. The end result will certainly be worth it, though.