People need their mail no matter where they live and postal workers face more challenges than barking dogs to get the job done. Sometimes that means driving when road conditions are absolutely horrid, all while handling precious cargo like porcelain trinkets from your nana; no matter the specifics, everybody expects their stuff to show up in one piece. For the roughly 120 people living in parts of Yellowstone National Park that are only accessible by snowmobile in the offseason, it’s no different.

That’s why this hulking Ford Super Duty delivery truck exists. While four seasonal post offices dot Yellowstone’s map, they close when the roads become impassable—at least for the usual Grumman LLVs. Only then do rangers drive 150 miles round trip twice a week dropping off supplies, equipment, and presumably car dealership mailers to each and every person along the treacherous route. It’s a daunting task, but hey, someone’s gotta do it. 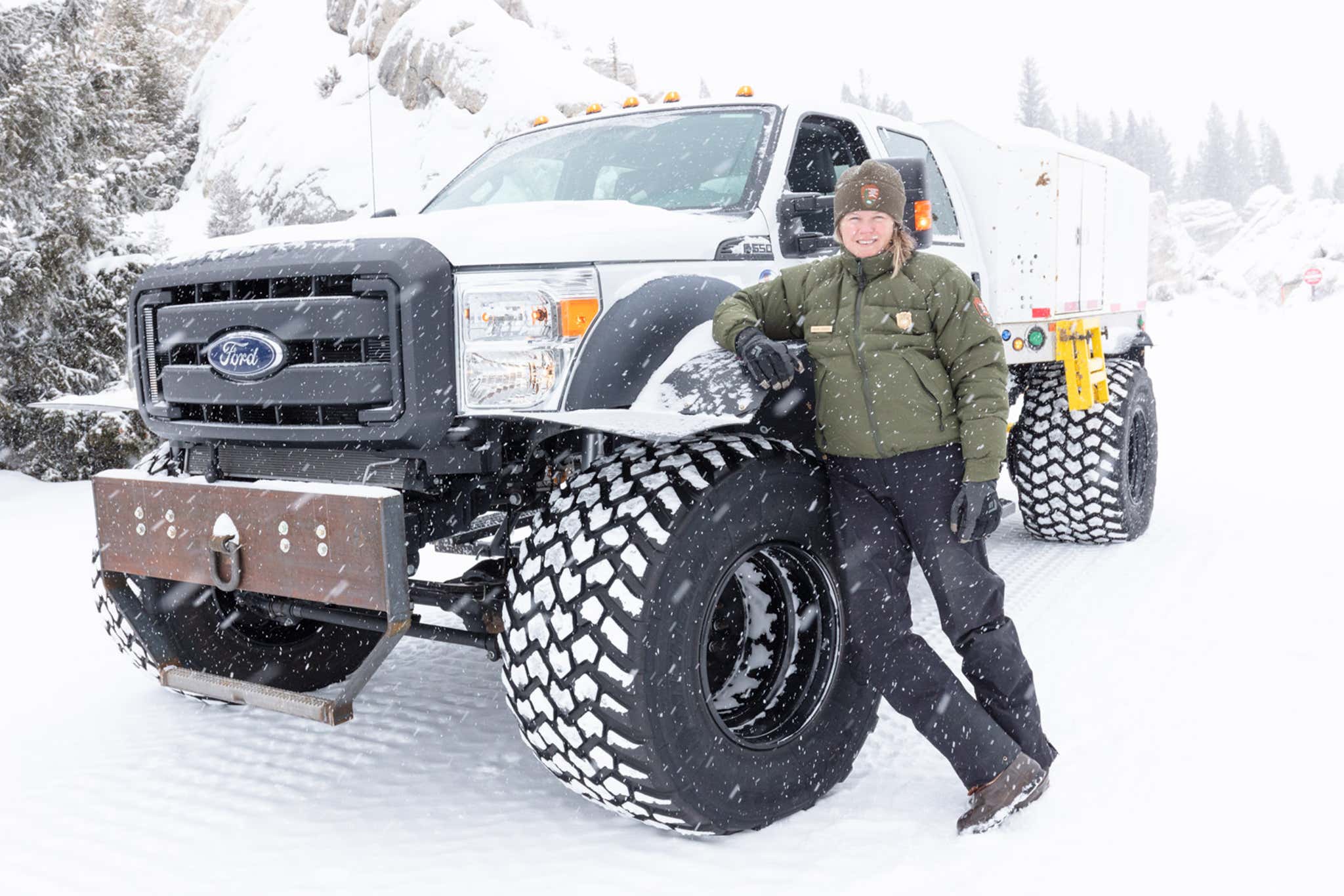 Cudmore is roughly six feet tall with her boots on.

The truck is a previous-gen F-550 with a 6.7-liter Power Stroke diesel V8. It’s hard to peg how much power this exact Super Duty makes seeing as the chassis cab trucks, like this one probably was in the beginning, are detuned compared to their three-quarter and one-ton pickup counterparts. Still, bet on this one putting out at least 300 horsepower and 660 pound-feet of torque. What I wouldn’t expect from the National Park Service, though, is a soot-spewing tune; the truck’s driver, Yellowstone Ranger and winter courier Rachel Cudmore, confirmed to me that the engine is, in fact, stock.

The Michelin CARGOXBIB high-flotation tires come in handy given their ultra-wide contact patch, and they each measure 560/60R22.5. If this handy-dandy calculator is correct, that means they’re 49 inches tall and a whopping 22 inches wide—that’s a match for even the toughest Alabama mud boggers. They’re mounted on 10-lug steel wheels with enough offset to clear the upgraded steering and brake components.

There’s been a host of drivetrain and suspension upgrades to accommodate those extra large tires, like a Detroit Locker Super 60 axle up front and an eight-inch lift. The front suspension mounts actually had to be relocated, as Cudmore explained to me, and the rear features Torklift Stableload blocks for improved payload support. 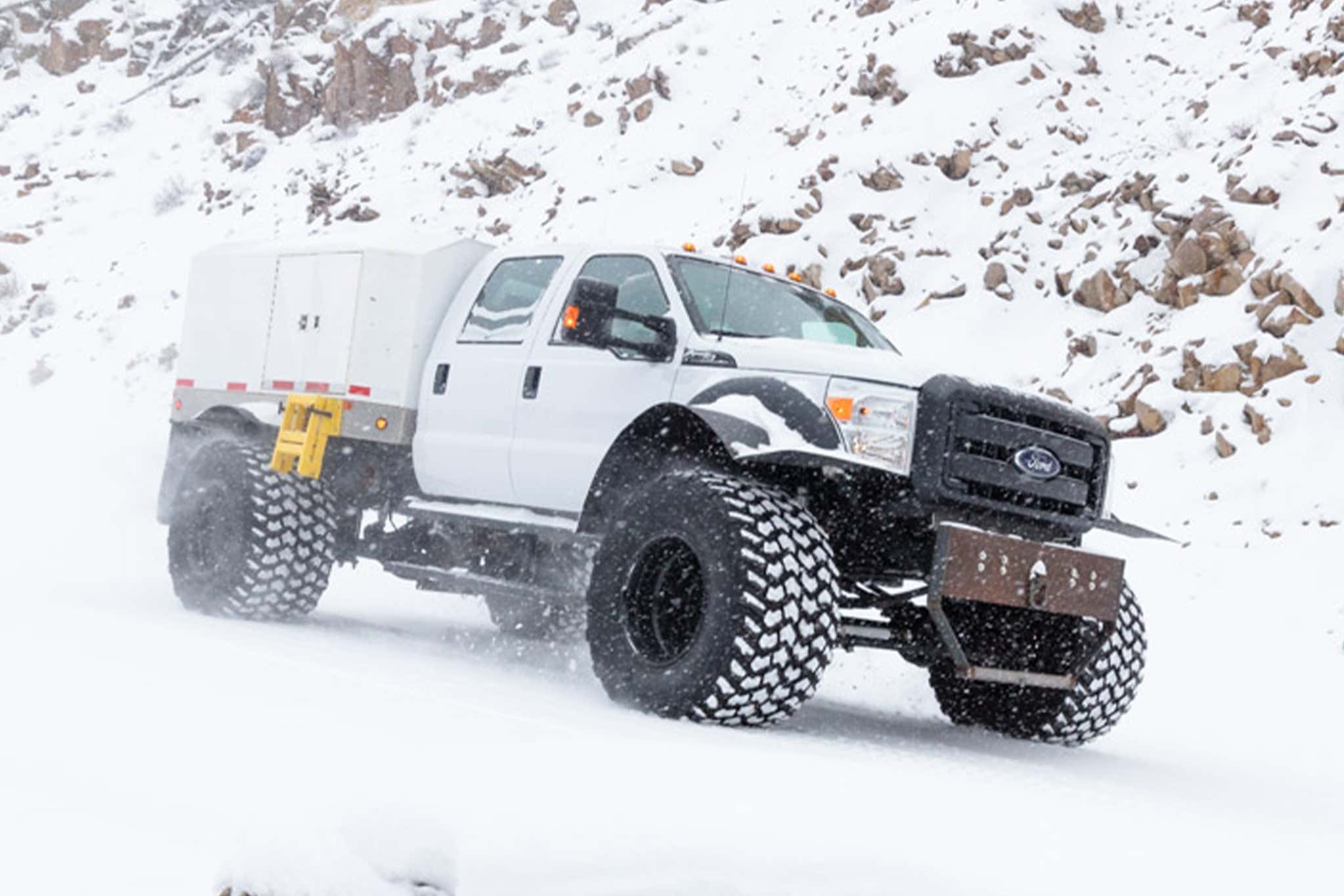 It’s got fender flares on top of the fender flares normally offered on the F-550. Or, rather, below them and poking out about a foot or so to keep stray debris from damaging the truck. They’re poly units that are pliable below temperatures of negative 30 degrees Fahrenheit. The side steps also earn their keep as it’s all but impossible to hop in without them or the vertical leaping ability of Lebron James.

That front bumper is, uh, far from factory and it’s there for good reason. There’s yet another step that’s been fabricated so they can check the engine bay if anything goes wrong, and there’s a centrally mounted tow hook to yank it out of any unfortunate situations. If you’re wondering what could possibly get this thing unstuck, then have a look at the snow-dozing Caterpillars Yellowstone uses to clear the mountain roads this time of year.

In all, this is a serious rig that was built for a purpose. People can hate on brodozers all they want—I’ll even join ’em sometimes—but there’s no doubting the capabilities of this Super Duty. Just don’t expect the driver to pick up your McDonald’s drive-thru order on their way.