Okay, I get that the headline doesn’t seem that striking if this was the start of the season. Y’know, technically anyone can win, right? Maybe Williams’ recent points haul means it’s on the up for the team in F1 now. But I’m typing this to you from a Berlin hotel room ahead of the final races of Formula E’s first year (and some change) as a world title.

The world title thing means absolutely nothing except a substantially higher contribution to the FIA’s bank account—FE’s always technically qualified to be a world championship, just never coughed up the Euros—but if that’s only a nominal change then something else has happened this year. Formula E’s consistently been competitive and, until last season’s weird, weird ending, had always gone down to the final weekend to decide the title…just not normally with 75 percent of the field still genuinely within a shout of winning the championship. 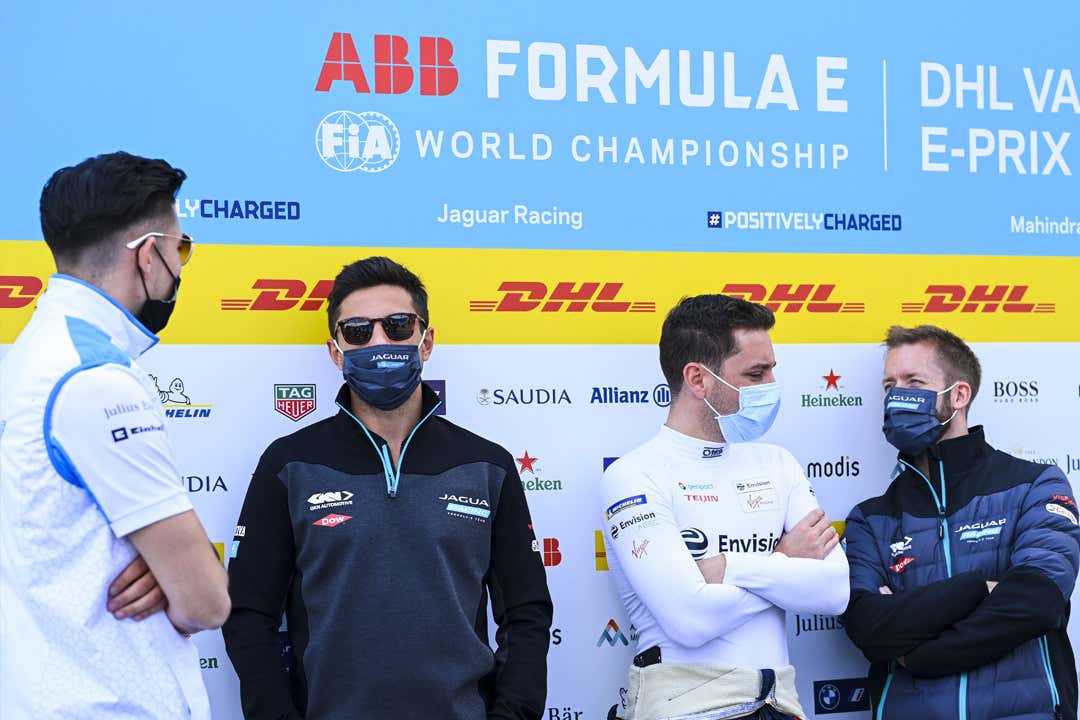 What’s even weirder about this being the most chaotic season Formula E’s ever had, points-wise, is that nothing’s really changed. Huge format shake-ups like the shift between Gen1 and Gen2 or massive readjustments of the grid might well happen at the end of this season with manufacturers departing. That’s not this season, though.

The only thing that really changed this season was a couple of tracks but otherwise, it’s been pretty normal. Sure, teams updated their powertrains but they usually do that every year. And if you look at the points scored by each driver, hardly anyone can achieve anything even bordering on consistency.

There are 30 points available to each driver per round of Formula E if you score the win, the fastest lap, the fastest time in group qualifying and pole position. So if you get a substantial chunk of those and your rival gets nothing, you’ve got a chance at a big swing, but that’s never really been the way the championship’s worked before.

This year, drivers either score big—sometimes twice in a row, sometimes just with enough of those 30 points it’s a big swing anyway—or they don’t score at all. Maybe they don’t finish a race, or multiple in a row.

I plotted the score, each round, of every driver this year. Thirty is obviously at the top—it was achieved a couple of times by Nyck de Vries in round one and Jake Dennis in round six, which is why you see those two big spikes—as well as Sam Bird’s 29-point haul in round 11. The rest of the table shouldn’t look like this. It shouldn’t be a shark’s mouth of up and down with only a few bridges; you’d usually expect drivers to score for a couple of rounds in a row, not flash in and out of the points. It’s not resetting every time, it’s only plunging down to their next score, as you can see from the rare elbows.

The championship’s top three drivers are listed atop the chart here: leader Nyck de Vries, Robin Frijns in second place and Sam Bird, who’s swapped with De Vries for the lead more times in the points than on-track.

Points score per round 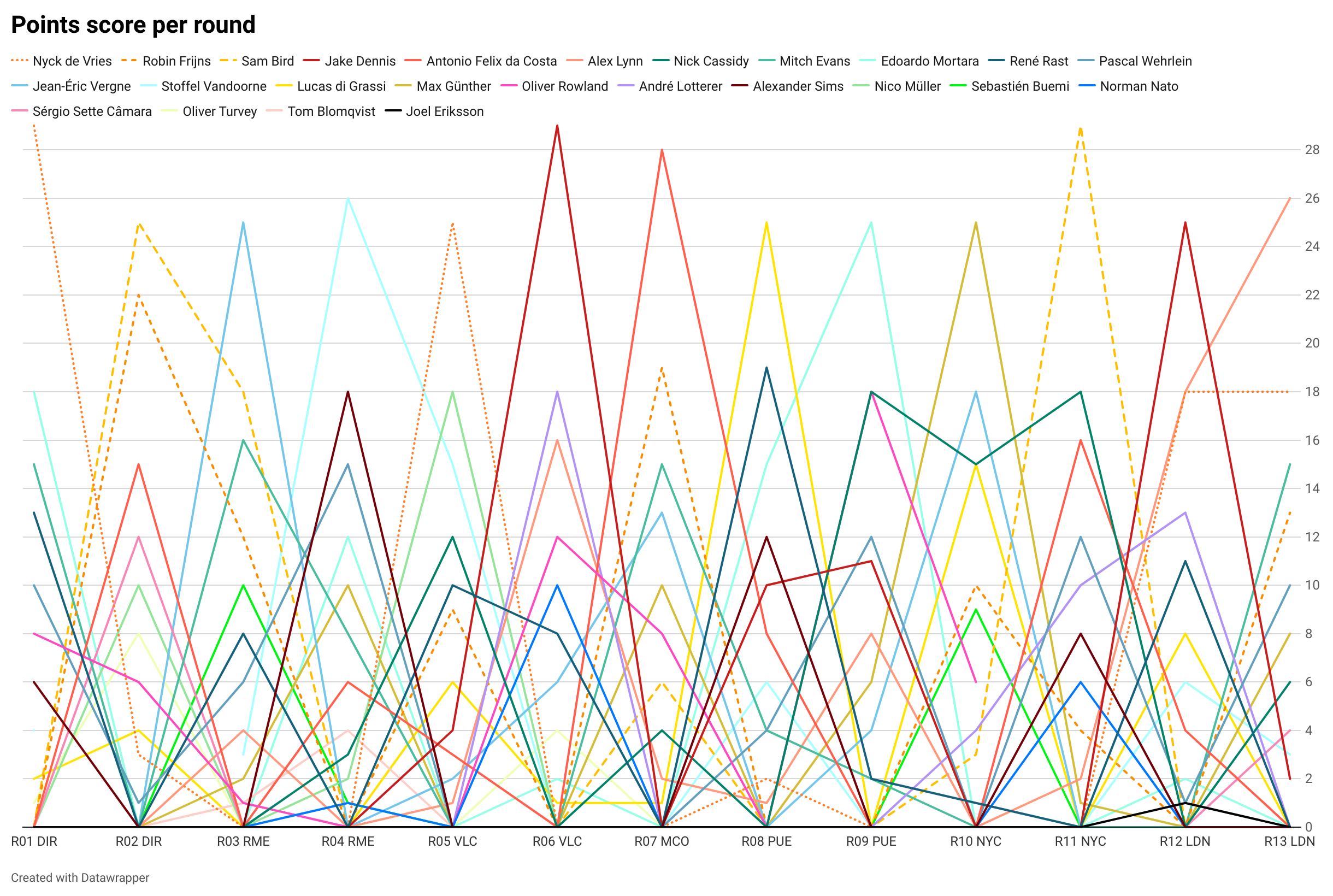 Points totals per round

Actually, saying it’s been a normal season isn’t quite right. As you can see from the labels across the bottom of the chart, there’s a lot of repeat rounds. Every race except FE’s triumphant bang around Monte Carlo, the highlight of the season, has been a doubleheader weekend.

That means cramming two rounds into 48—or sometimes substantially fewer—hours. Because of the way Formula E’s rules work, you have to pick your setup and programming for a weekend beforehand in order to homologate it, and if you get it wrong then you’re now suddenly stuck for two rounds. Or if you wreck the car a bit then it’s kinda just like that for both rounds. Or if the team’s having operational problems then, again, you’ll find you’re not able to correct it with a reset in less than 12 hours turnaround between the checkered flag and the next practice session.

Although group qualifying gets blamed for the chaos in terms of starting positions, that’s not been changed from previous years. The only time we’ve seen swings like this before was at that weird, weird Berlin finale I mentioned before.

In six races over nine days at the same track, all formed into double-header rounds of back-to-back race days, the points suddenly got away from people. Drivers who’d come in with a good chance were looking completely smoked by the end of the first two Berlin races and would only slide further, miserably backward. That’s the same swinging we’ve seen in the points this year, except because we’ve moved around just enough, it hasn’t been the same immense, pendulous swipe through everyone else’s title hopes Da Costa pulled off last season.

So now we only have Berlin to go. Two rounds, 60 points on the table for whoever can grab as many of them as they can. From first-placed De Vries on 95 points to 18th-placed Alexander Sims on 44, it’s anyone’s shot to lay their hands on Formula E’s first world drivers’ championship.