Rules are rules, says the FIA.

FIA stewards today rejected an appeal by Aston Martin on behalf of four-time Formula 1 champion Sebastian Vettel regarding Vettel’s disqualification at the F1 Hungarian Grand Prix. The Aston Martin team was unable, after the race, to produce 1.0 liter of fuel from the car as per FIA rule. The team was only able to extract 300 ml (about one third of the amount of fuel required) from Vettel’s AMR21.

The rule is in place to help ensure teams are running the fuel that they have registered with the FIA, and one liter is required in order to carry out the relevant checks in post-race inspections. In effect, it is one of many mechanisms Formula 1’s governing body, the FIA, has in place to make sure no one is tampering with fuel. 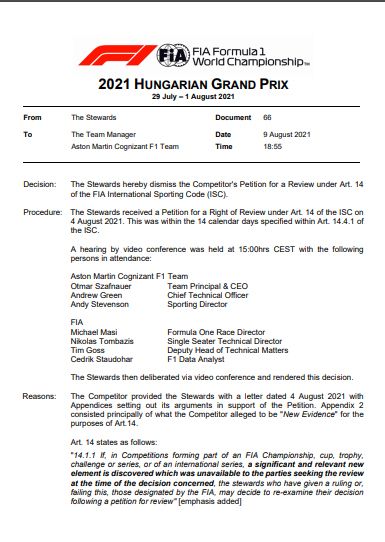 In its appeal, Aston Martin claimed that its own “analysis of more than 100 channels of fuel system-related data” determined that there was a fuel system failure in Vettel’s car. “As a result of the loss of fuel cell pressure, the air pump in the fuel cell activated a maximum output. By pumping air through the fuel cell, a significant amount of fuel was inadvertently discharged from the fuel cell of the car.

“As a result of that, it was only possible to obtain a 0.3 liter sample of fuel, significantly less than the volume that was expected to have remained. Failure of the Fuel Cell Pressure relief valve to seal is the prime suspect but any leak path from the fuel cell would have caused the loss of fuel pressure and resulted in the loss of fuel.”

In fact, Aston Martin’s own data suggested that there was as much as 1.74 liters of fuel left in the fuel cell at the end of the race.

The FIA stewards, in their decision on Monday, stuck to the letter of the rule. Why Aston Martin crew members were unable to extract the necessary amount of fuel was not a factor in the penalty.

The penalty, while it took Vettel from a podium finish, was a benefit to the cars that finished behind Vettel. That included Lewis Hamilton, who moved up from third to second, and Max Verstappen, who moved up for 10th to ninth. Hamilton gained two points in the championship in relationship to his No. 1 rival Verstappen in the exchange and now leads by eight points in the championship instead of six.

“For the assessment of whether or not the 1-liter requirement was broken, it does not make a difference why there was less than 1 liter,” the FIA wrote in its decision. “There may be a couple of explanations why at the end of a race the remaining amount is insufficient. In any case, it remains the sole responsibility of the competitor to ensure that the car is in conformity with the regulations all times.

Aston Martin team principal Otmar Szafnauer was disappointed in the ruling and is considering further action.

“Sebastian drove brilliantly in Hungary and we are pleased to have been given the opportunity to show significant new evidence that we discovered since the race,” Szafnauer said. “We felt that the evidence we presented was relevant and demonstrated to the FIA that he should have been reinstated following his disqualification.

“Unfortunately, the FIA took a different view and, despite the fact that that the accuracy of our new evidence was not contested, Sebastian’s disqualification has been upheld on the basis that the new evidence was not deemed ‘relevant’. That is disappointing, and we will now consider our position in respect of the full appeal process.”