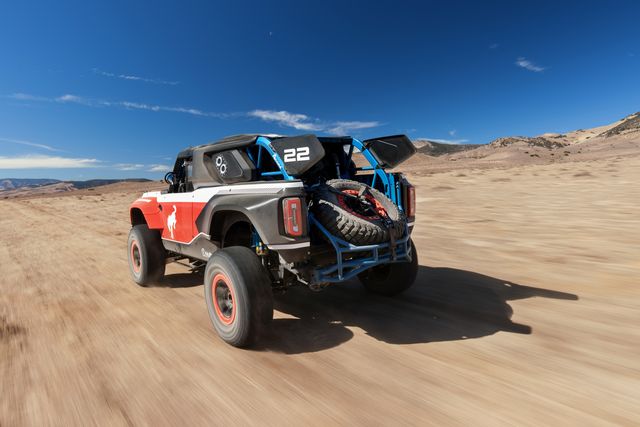 Right about 50 years after Larry Minor/Rod Hall and Parnelli Jones/Bill Stroppe won the Baja 1000 in Ford Broncos, Ford pulled the dust cover off the all-new, race-ready Bronco DR. The DR stands for “Desert Racer,” naturally, and that is precisely what you’ll get in this consummate cactus crusher.

Officially a “race concept vehicle,” the two-door race truck is based on a four-door frame, with massive modifications from Ford Performance and a suspension from Multimatic. Under the hood is a third-gen 5.0-liter Coyote V8 that Ford hopes to get up to 400 hp, a modest goal considering it gets more than that with Coyote V8 in the Mustang.

Ford says 50 examples of the off-road-only Bronco DR will be available for purchase in late 2022 and that it plans to race one in the Baja 1000 in November of that same year. It will race in SCORE’s “Heavy Metal” class for unlimited four-wheel vehicles with production-appearing trucks or SUVs with V8 engines. 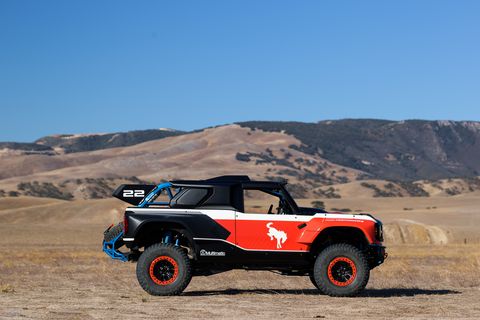 How much will this return to glory cost potential racers? Sticker price will be “in the mid-$200,000 range,” according to the Blue Oval. A first look at the DR in the mountains outside Las Vegas the day before the SEMA show opened showed a thoroughly well-designed truck that certainly looked like it could “beat the Baja,” as ABC’s Wide World of Sports’ Jim McKay once described racing on that rugged Mexican peninsula.

“The Ford Performance team designed and engineered every facet of the Bronco DR to help endure multiple days of torture over grueling terrain in the high temperatures of the SCORE Baja 1000 in Baja California, Mexico,” Ford said.

Perhaps the biggest advantage to the new Bronco DR is that you don’t have to do the development work yourself—Ford and Multimatic have already done it. You just get in and drive it. And maybe win, who knows?

“Bronco DR exists to give hardcore off-road enthusiasts a Built wild, turnkey 4×4 to compete in desert racing events, including the unforgiving Baja 1000,” said Mark Rushbrook, Ford Performance Motorsports global director. “It started with the Bronco four-door—the platform and chassis are production true, and then we modified and optimized every aspect and built the vehicle hardcore off-road enthusiasts want.”

It sure looks the part. The fiberglass body panels retain the production Bronco’s look and hide the two-seat-only interior.

“It’s not just a Bronco with some stripes on it,” said Paul Wraith, Bronco chief designer. “We were inspired by extreme rally cars, and then went all in. For this skunk works project, the Bronco team quickly found a theme and developed CAD (computer-aided design) with heavy use of virtual tools. This is an off-road racing vehicle built out of a production vehicle. We’re so happy to have been involved.”

“This is a ground-up build, which is a bit unique in itself,” said Rushbrook. “At the heart of what we did here was capture the enthusiasm surrounding Bronco, and then build on it by creating a desert racer that is competition-ready coming out of the factory—something Ford has never done before.”

Share your thoughts on desert racing, Ford’s Baja-racing heritage, and the Bronco’s off-road creds in the comments below.