Nikita Mazepin arrived in Formula 1 under a cloud entirely of his own making. And he’s not redeemed himself since.

The son of a billionaire oligarch, Mazepin signed with Haas for the 2021 season and promptly disgraced himself and the sport by filming himself groping a woman’s breasts just before the Abu Dhabi Grand Prix. Spending the first week of a new job by being first condemned as “abhorrent” by your own team and then indicted by both F1 and the FIA before you’ve even turned the wheel of a car is quite a start. 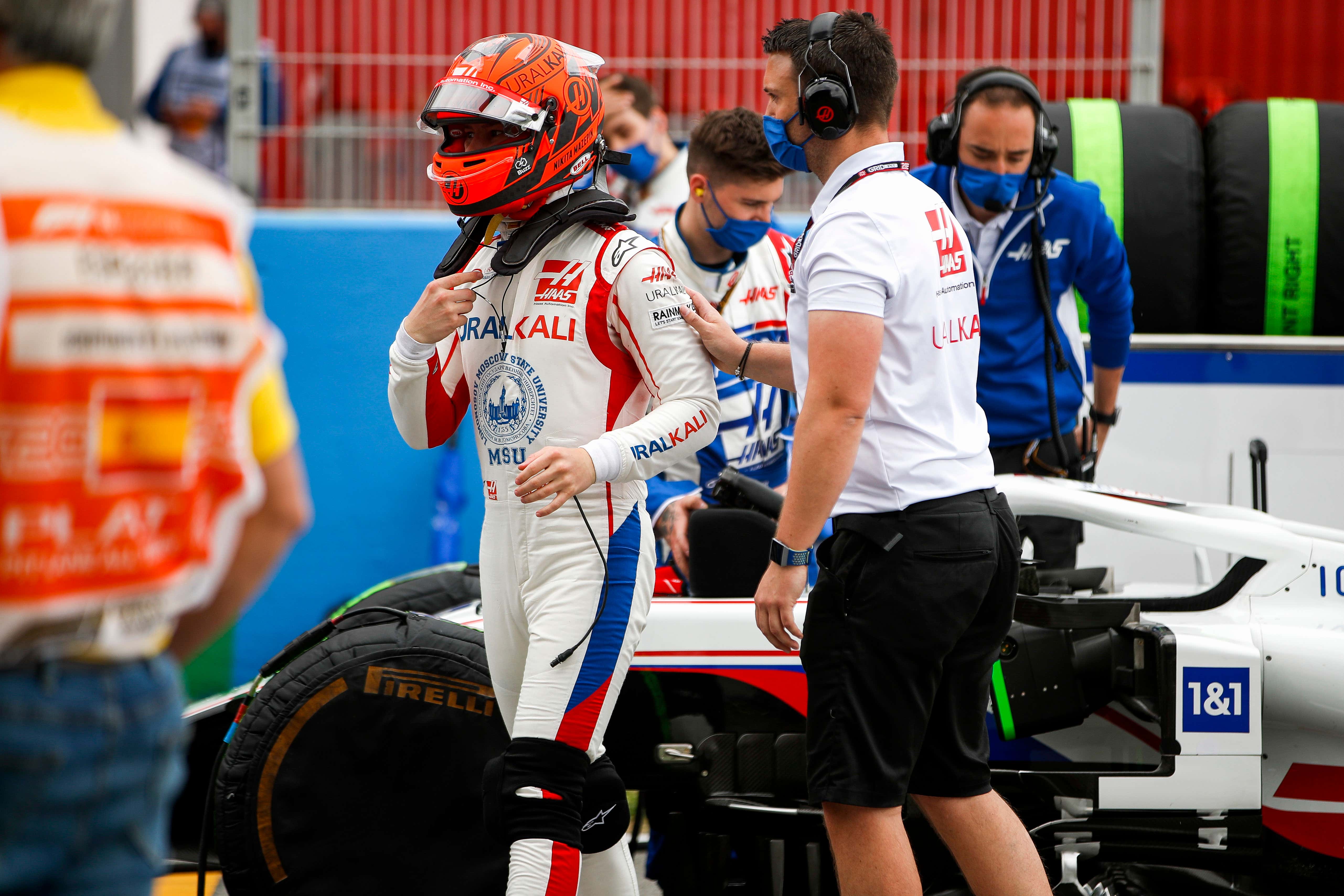 Not that this was Mazepin’s first—for legal reasons I have to call—”controversy.” While he was racing in junior series Formula 3 he physically assaulted rival Callum Ilott so badly Ilott sustained cuts to his face and a swollen jaw. Mazepin received a race ban as punishment. Mazepin also finished the 2019 Formula 2 season with so many penalties that he nearly missed the final race, which would have been a problem given he needed to place high enough to earn a Super License. And away from the track, he was seen partying during the funeral for miners killed in operations owned by his father.

The hashtag #WeSayNoToMazepin has been trending on and off ever since the groping incident. Pre-season, Mazepin gave the regrettably quotable statement that he wanted his “racing to do the talking.” All very well, unless you spin out of your first F1 race after just a few corners of Bahrain.

In all fairness, the Haas car this year is a completely undrivable dog of a vehicle that seems particularly prone to going haywire when subjected to anything you could classify as “weather,” so it’s not an easy situation for a rookie in F1. Still, Mazepin didn’t help the situation with further spins at Imola and by being penalized for an incident under blue flags, where he was told to let Sergio Perez lap him. It was an incident race control was clear was brought to their attention because of a near-collision caused by—you guessed it—Mazepin.

For a sport with athletes that tend not to lay into each other with the casual enthusiasm for drama like some other series might, it takes a lot for a driver to earn a reputation as a mobile chicane in F1 these days. But from breaking a “gentleman’s agreement” about jumping the order of cars during an out-lap in qualifying at Bahrain to blocking Lando Norris during the same session at the Spanish Grand Prix, it would be fair to say that Mazepin is not making friends and influencing people among his fellow drivers.

Ferrari driver Charles Leclerc was so frustrated by being blocked during Friday’s free practice that he said, “Mazepin will never change,” on the radio, prompting his team to report the incident to race control.

Esteban Ocon said, “When we cross paths on the track, I act 200 percent more attentively with him than with any other driver.” Which, given they only cross paths during free practice or while Ocon’s Alpine car is lapping the Haas, is quite a statement.

During the Spanish Grand Prix, broadcasters had access to the radio direct between team pit walls and race control for the first time. Everyone heard the message from Toto Wolff asking race control to get Mazepin to move over. This, as F1’s race director Michael Masi said, was a rare communication from Mercedes. And even Mazepin’s own teammate, Mick Schumacher—one of the most rigidly diplomatic drivers ever—admitted he first heard of Mazepin when he was warned about Mazepin’s aggressive driving in karts.

Mazepin has very few defenders. When Lance Stroll struggled at the back of the grid a few years ago, Lewis Hamilton defended him and said it was too easy to criticize a rookie when F1 is an extremely difficult step to take for a driver. There hasn’t been a rush of anyone sympathizing with Mazepin, whose charm offensive has most recently included making sure everyone knew he wasn’t kneeling to protest racism during the anti-racism demonstration before Sunday’s race.

It seems unlikely there has ever been a driver so universally and vocally disliked by his peers after just four races. And there’s a fair amount of precedent for drivers sticking together even when things go to hell. After Bertrand Gachot was convicted of actual bodily harm for attacking a London cab driver, grand prix drivers wore t-shirts with messages of solidarity at the race he couldn’t attend because he was, umm, in jail.

Prior to the season, public fury riled against Mazepin over failure to address the groping video. But he brings money to F1—to the point where the Haas team has now officially rebadged as Uralkali Haas—after Mazepin’s father’s chemical and mining empire. Money gets you a long way in a sport that burns through cash like brake discs.

This is a problem. If four races in, drivers are already nervous about even passively sharing the track with Mazepin (none of the incidents he’s been involved in have been for actual overtaking or fighting for position) then it feels like he isn’t up to the right standard. Although Mazepin is new to driving the Haas car, he’s gone through an extensive private testing and coaching program with Mercedes in 2019 and has probably had more hours in a (relatively) modern F1 car than any rookie making their debut since F1 restricted private tests.

Haas team boss Steiner theorized that might have actually set Mazepin back a bit, as the Haas car doesn’t drive like a Mercedes car, but the reality is that Mazepin’s teammate Schumacher had been testing in a Ferrari pre-season and doesn’t seem to be having the same difficulties.

So what should F1 do? Mazepin feels like a concentration of its other issues. From having an extremely divided initiative called We Race As One that highlights exactly how little 20 drivers can agree about protesting racism, to the push-pull problem of it wanting to call itself the highest level of motorsport in the world but being so financially pressed that it needs billionaire kids paying for a seat.

F1 is more complex than ever and having, to the slight surprise of a lot of fans, one of the best years it’s had for ages. Lewis Hamilton’s achievements on and off-track have brought the sport to light in mainstream spaces it never would’ve been considered, and things like Netflix’s Drive To Survive have brought in more new fans than ever.

But it sits in a contradiction: the greatest, most elite sporting spectacle in the motor racing world (or so the PR goes) is held ransom to a below-par driver, whose off-track actions have been rightly condemned and whose on-track record is getting him a level of peer respect best described as subterranean, all because, otherwise, one team can’t afford to go racing. Even with Mazepin’s money, it can’t afford to be competitive; Haas has yet to score a point and is very unlikely to, this season.

Backmarkers rarely draw any attention in F1 unless it’s for their epic failures, which you could say is at least rewarding Dmitry Mazepin’s investment with sponsor airtime. Fans vocally expressed their fury about Mazepin joining the series before he even did and it was largely stonewalled. Haas said it dealt with the groping video incident privately but never issued a statement. It also never stated where it stands on harassment, or what further consequences a repeat would result in.

Now that fellow drivers and teams are laying into his on-track behavior, the FIA can react to incidents by issuing penalty points and ultimately give Mazepin a race ban if he racks up enough. But if the team is still held over the money pit that made them sign him (over, ironically, Callum Ilott) then even that might not really have a consequence.

F1 started as a rich boy’s paradise for driving fast cars and taking enormous risks. But 70 years on, that’s not the massive engineering research arms race it’s turned into, and the unfairness of Mazepin’s presence in it grinds like a badly-calibrated gearbox that’s not up to 2021’s demands.