An “angry” Pol Espargaro wants MotoGP to address “dangerous” situations created by the presence of replacement riders, after he was baulked by Sylvain Guintoli in Friday practice at Silverstone.

Suzuki test rider Guintoli has made two prior appearances as a wildcard rider this year and is standing in for the injured Joan Mir in the works team’s main roster at the British Grand Prix.

KTM rider Espargaro came up on Guintoli in the final sector of his fastest FP2 lap, with the Frenchman rolling out wide at Brooklands to allow Maverick Vinales, Karel Abraham and Aleix Espargaro through before returning to the racing line entering the Luffield right-hander.

This disrupted the other Espargaro, and the Spaniard was only 13th-fastest in the end, meaning he now needs to improve in FP3 if he is to earn direct progression to Q2.

“I was coming really fast, I think I would be fifth in the classification, with [1m]59.9[s],” Espargaro said, having dropped almost three tenths relative to his previous best in the final sector.

“I find Guintoli in the last corner in the completely middle, he checked behind but he crossed completely the [racing] line. I can more or less understand because they are not used to racing with us, so they are missing this speed, but it’s rule of MotoGP that says that the bike cannot be stopped [parked for the weekend], so you need to put a guy on the bike that is not used to racing with us.

“So these things can happen – which is very dangerous for us. So for sure I’m going to talk in the Safety Commission [Friday meeting], because I’m angry, because you risk so much in that lap, and then you risk again in this kind of action.”

MotoGP’s regulations mandate that teams “make every reasonable effort to provide a qualified substitute rider” in case they have advanced warning that they will not be able to field their regular rider.

Mir did not race at the Red Bull Ring after he was injured in a Brno testing crash, and the Spaniard did not recover in time for Silverstone, leading to Guintoli’s call-up.

“For sure, we need to talk about that – because on the one hand this is not fair for us, and on the other hand, yeah, the bike cannot be stopped on the pitbox because otherwise the grid is going to be with not so many riders on,” Espargaro continued.

“But it’s dangerous for the guys who are riding fast, and at least they [replacement riders] need to be careful. Because they are not playing for nothing [in the standings], but I’m playing for a good position in the championship. And this can make me go into Q2 and then have a good race on Sunday.

“I mean, for sure, that lap is not going to fuck up all my weekend, but… it can. So we really need to take care [in] these situations.”

Espargaro wants MotoGP to tell replacement riders to “pay double attention”, especially in the closing minutes of FP3, when the automatic Q2 spots are normally decided. 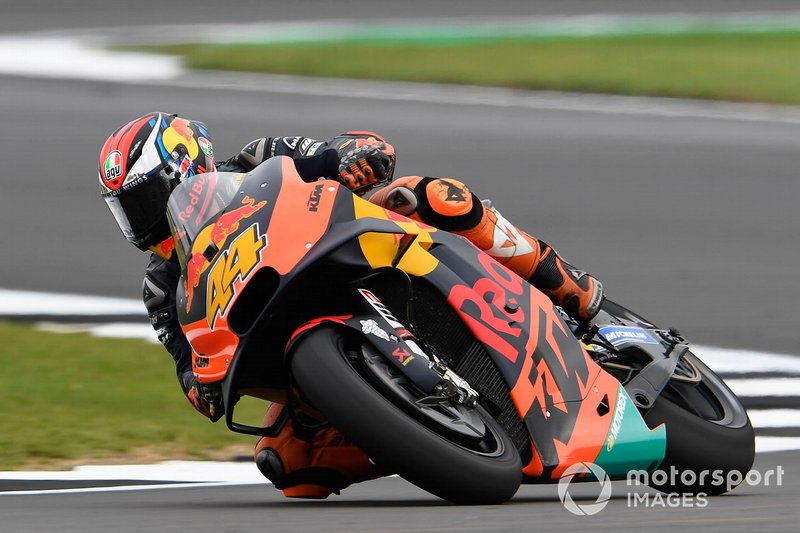