After a quarter of a century, the oldest pavement in NASCAR is due for a repave and Atlanta Motor Speedway will receive an entire reconfiguration alongside it.

The D-shaped mile and a half in Hampton, Georgia will become the highest-banked intermediate track in NASCAR next season after increasing its banking from 24 degrees to 28 degrees while narrowing its racing surface from 55’ to 40’. The straights will remain at 5 degrees. 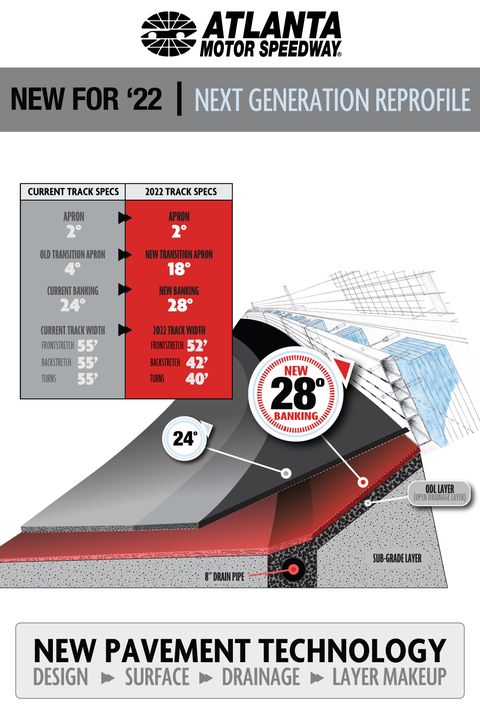 For the sake of comparison, Daytona International Speedway features 31-degree banking and Talladega is 33 degrees, but both tracks are a little larger than 2.5-miles.

The entire racing surface will also receive a new layer of asphalt to replace the bit laid down in 1996, but the track will retain most of its current shape. The repaving process will begin next week after Sunday’s Quaker State 400 Cup Series race.

Speedway Motorsports Inc., which owns the track, used iRacing to simulate the upcoming Next-Gen Cup Series cars on the intended racing layout and hopes to optimize the racing platform for this configuration.

At first glance, and the simulation data supports it, the direction seemingly intends to produce racing closer the product witnessed at Daytona and Talladega.

Here’s a taste of the next generation of Atlanta Motor Speedway! 🤩

Recently promoted to Atlanta Motor Speedway general manager and vice president with the retirement of Ed Clark, Brandon Hutchison says everyone in the industry knew a repave or reconfiguration of the property would soon be necessary.

The company is also working to restore Nashville Fairgrounds Speedway for a future Cup Series weekend.

“We looked at the Atlanta project as a chance to bring another first to our company and to our sport,” Hutchinson said. “This is a chance to recreate what racing could look like on an intermediate track. Steve Swift and his team of engineers and iRacing have been working on this project for about a year. I know Steve has thought about it for many years. … This will produce a show like no one has ever seen on an intermediate track before.”

Steve Swift is the vice president of operations development at SMI and spearheaded this project under the guidance of president and chief operating officer Marcus Smith.

“You’ll see in the renders and simulation that cars are grouped together and that creates better entertainment and better competition for the sport, and definitely for this type of track,” Swift said. “This will be a first for an intermediate to have this kind of banking. It will be the first time an intermediate has been banked over 24 degrees. With all that, the thing our company and Marcus pushes us is to be the first, innovative, and this is definitely that.”

Prior to the 1996 reconfiguration into a Tri-oval, Atlanta Motor Speedway was a quad oval best compared to the current Homestead Miami Speedway layout. The current Atlanta has been widely praised by both fans and drivers alike, with the latter staving off SMI repaving efforts over the past half-decade.

In intending to create something never before seen on an intermediate, Swift says SMI didn’t want to go back to any other previous formula for the speedway.

As for driver feedback, Swift said drivers were not consulted for this project as SMI believes that would have led them down a wrong path for fans.

“We tried to do what’s good for the sport, and Marcus does talk to the drivers to guage feedback on what works well for them and he feeds us that information, and I say this with jest a little,” Swift said, “but when a driver is happy the fans aren’t.

“When fans are happy, drivers aren’t. When you talk to drivers, you get driver’s tracks and we’re making a fan’s track. We’re taking elements of feedback, but we’re ultimately giving the fans what they want to see.”

And combined with a new car that will generate less horsepower and featuring numerous aero ducts designed to create a slipstream, SMI and NASCAR believes fans want to see more pack racing similar to Daytona and Talladega.