Richard Childress eventually gets around to the answer.

He goes hither and yon for a while, sidestepping the issue, bobbing and weaving, ducking to avoid what everyone knows is coming. He seems determined to make sure the —only answer—doesn’t overshadow other great moments in his company’s 52-year history.

But, of course, it will. How can it not?

So here it is: the most important of the 109 NASCAR Cup Series victories for Richard Childress Racing came on February 15, 1998 … that glorious, saints-be-praised, hallelujah Sunday afternoon when Dale Earnhardt won the Daytona 500 in his 23rd try, his 20th with RCR. There are backyards across this land where people of a certain age consider that date a national holiday calling for beer and barbecue.

We had won a bunch of Daytona 499s,” Childress recalls during a recent visit to his sprawling campus in Welcome, North Carolina. “For example, leading on the last lap in 1990 and cutting a tire in Turn 3. (Winner Derrike Cope led five laps; Earnhardt led 155.) We had a heckuva chance in 1993, when we finished second to Dale Jarrett. (An aside: Remember the understandably biased “it’s the Dale and Dale show and you know who I’m pulling for” commentary from CBS-TV broadcaster Ned Jarrett?)

“The year after we won, we finished second to (Jeff) Gordon. Man, we finished second a bunch of times. Still, it never crossed my mind that we’d never win the 500. When Dale Earnhardt crawled into your car at Daytona, you just knew you were going to win. There were so many times when it was just circumstances that beat us. I can’t remember ever putting him in a car at any track where I didn’t think we were going to win. We’d won everything else down there, so I never thought we wouldn’t win the 500.”

Earnhardt’s record at Daytona International Speedway was astonishing. He ran 23 Daytona 500s, three with Rod Osterlund, two with Bud Moore, the last 18 with Childress. In addition to his cherished 1998 victory, the seven-time series champion was runner-up five times, including a spell of three of four in the early 1990s. He was top-5 in six other 500s and sixth-to-10th four other times. It’s ironic that his lone 500 stands in sharp contrast to 33 other victories at the self-titled “World Center of Racing.” His overall record there: 12 victories in 125-mile Duels, seven in Xfinity, six in Busch Clash/Budweiser Shootouts, six in IROC, and two in the summertime Coke 400.

But February ’98 is the victory most fans remember.

Earnhardt started fourth that day, behind the front row of Bobby and Terry Labonte and beside No. 3 qualifier Sterling Marlin. After Bobby Labonte and Marlin led early, Earnhardt proceeded to dominate as he had so many times before. He led laps 17-36, 45-58, 123-126, 131-139, and then to the finish, from lap 140 to 200. It was ho-hum business as usual: the Intimidator was once again kicking sand on ‘em at The Beach.

But there was brief suspense late, when Lake Speed and John Andretti spun on the backstretch at lap 198. By rule then (no longer), drivers raced back to the start/finish line for yellow flags. Earnhardt easily beat Bobby Labonte from Turn 3 to the yellow and white flags, virtually assuring victory. All that remained was to follow the pace car to the yellow and checkered flags, a formality one TV commentator called, “the most anticipated moment in racing.”

“Dale was leading with two or three to go when I leaned over to (crew chief) Larry McReynolds and said, ‘Hey, we’ve been here before. Let’s make it happen this time,’ ” Childress tells his guest. “I knew that when the caution came out, he’d just have to get back to the line first and we’d win the race. It was an unbelievable moment, just an unbelievable memory.”

Earnhardt took the yellow and checkered at maybe 85-90 miles per hour, his left arm waving exuberantly out the window opening. As he reached pit road after his cooldown lap, he found virtually every crewman from every team in an impromptu receiving line waiting to offer congratulations. (They may not necessarily have liked him, but they certainly respected him). Midway during the ritual Earnhardt cut right and did a series of smokeless donuts in the trioval grass. When he got to Victory Lane, he found grown men rough, tough, grizzled old men—hugging each other and weeping unashamedly.

He stood on the roof of his No. 3 Goodwrench Chevrolet and thrust both arms skyward, like Rocky on the steps of the Philadelphia Museum of Art. He hopped to the ground, pounded the car’s roof several times with each fist, and uttered the nine most famous words in Daytona 500 lore: “We won it! We won it! We won it!”

When that story ended – clearly No. 1 in his all-time “Best Moments” memory bank – Childress insisted on sharing some “honorable mentions” in his company’s history:

• Grandson Austin Dillon got his first Cup victory by leading only the last two laps of the 2017 Coca-Cola 600 at Charlotte Motor Speedway. It was especially emotional for Childress since it was the No. 3 car’s first victory since Earnhardt’s fatal 2001 accident. Dillon won the 2018 Daytona 500 by leading only the last lap and won in 2020 at Fort Worth, where he led 22 laps. “Daytona was a big deal because of the history of Daytona and the 3 car,” Childress said. “Nothing is thicker than blood. Whenever your grandsons win, it means more to you.”

• Earnhardt’s victory in the second running of the Brickyard 400 in 1995 was privately very satisfying. Young rival Jeff Gordon had won the 1994 race and Earnhardt wanted to show the kid who was still the boss of NASCAR. He led the last 28 laps, his only time in front all day.

• Several weeks after Earnhardt’s death RCR “project driver” Kevin Harvick won near Atlanta by 0.006 seconds over Gordon. Much like Earnhardt’s 1998 Daytona 500, Harvick’s victory brought people to tears during his “Polish victory lap” while holding three fingers out the window in tribute.

• Younger grandson Ty Dillon was the 2012 Camping World Truck Series Rookie of the Year and its 2013 Most Popular Driver. Now a Cup regular for JTG Daugherty Racing, he has three Truck victories and won the 2014 Xfinity race at Indianapolis. In 2011 he won seven poles and seven races en route to the ARCA championship. 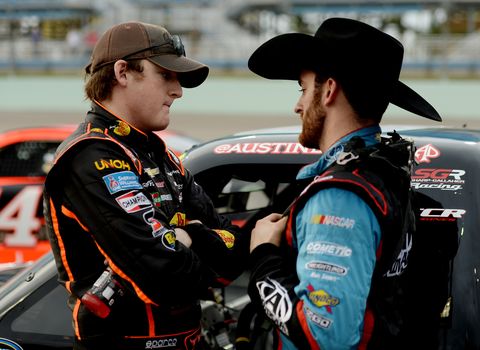 • Not surprisingly, Earnhardt gave Childress 67 of those 109 victories, their last together at Talladega in October of 2000. Harvick contributed 23 victories, Clint Bowyer five, Jeff Burton four, Robby Gordon and Austin Dillon three each, Ricky Rudd two (the company’s first two in 1983), and one each from Paul Menard and Ryan Newman.

• All told, RCR has 13 NASCAR championships: six with Earnhardt in Cup, five with Tyler Reddick, Austin Dillon, Bowyer, and Harvick (twice) in Xfinity, and two in Camping World with Austin Dillon and Mike Skinner, the first Camping World champion in 1995.

• And then there’s this: when asked early-on to select his company’s most important victory, Childress said July 5, 2015 at Daytona Beach, Florida. That’s when 25-year-old Austin Dillon walked away from one of the most spectacular and frightening accidents in the speedway’s history. It’s still difficult six years later to fathom how he survived as a dozen cars crashed around him at the finish of the Coke Zero 400.

Dillon was uninjured in the barrel rolling, fence-destroying, multi-car crash that began at the start/finish line. After contact from at least one car in the jammed-up pack, his No. 3 Chevrolet did a complete barrel roll and elevated bottom-first into the frontstretch safety fencing. The car ripped down a huge section of posts and wiring before landing back on the trioval on its roof. Parts and pieces flew everywhere, injuring several fans seated nearby.

Seconds later, the skidding car of Brad Keselowski plowed into Dillon’s hulk, spinning it like a top. The engine was separated from the chassis, a wheel assembly was missing, and much of the sheet metal was gone. The only things recognizable were the roll cage, a few random pieces of running gear, some sheet metal, and the car’s underside. No worse for wear, Dillon was helped out by crewmen and rescue workers. He gave the crowd a two-handed wave over his head and walked to a nearby ambulance for the mandatory care center checkup. Six days later he raced another 400 miles in Kentucky.

But that’s not a race victory, Childress is reminded. “No … but that was still our greatest victory of all time,” he says emotionally. “That was a victory for life.”