To many NASCAR fans, the 2001 spring race at Atlanta Motor Speedway remains among the most unforgettable moments of their lives. Some still tear up when the 20-year-old memory comes to mind.

It was March 11 when Kevin Harvick, a young, relatively-unknown newlywed from Bakersfield, California won the Cracker Barrel 500 at AMS. Along pit road, crewmen from Richard Childress Racing were embracing anyone in sight, weeping unashamedly, and pointing skyward with thanks to God.

Three weeks earlier, at Daytona International Speedway, those same crewmen had hugged and cried again … this time after Dale Earnhardt had died in the Daytona 500. If the 1959 plane crash that took Buddy Holly, the Big Bopper, and Richie Valens was called “the day the music died,” then February 18, 2001 was seen by many as the day NASCAR died.

Harvick’s photo-finish victory over Jeff Gordon—the first of his career—may have brought it back to life. 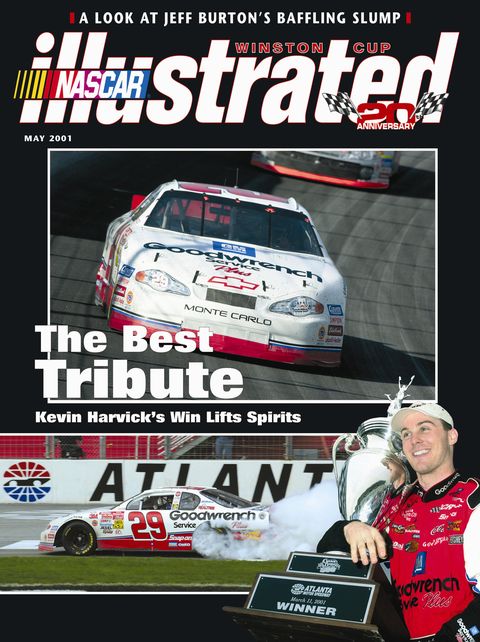 “Winning that race did as much for the whole sport as for anything else,” team owner Richard Childress said of that bright, sunny Sunday afternoon. “To see us go out and win in Dale’s car (renumbered from 3 to 29) was emotional for all of us, but it was good. It was just what all of us needed. There have been moments in the sport that have given everybody a better feeling about what was going on.

“Kevin winning at Atlanta was one of them. It showed that Richard Childress Racing was still out here, still racing hard, and still winning. I think that was important for the whole sport. Then, Dale Jr. coming back to win (in Daytona Beach) in July was another of those moments. And when he came back in February of the next year to win the Xfinity race in the 3 car was another one. They were all big moments for the sport, not just for our team.”

Few would have picked Harvick—just 24 at the time—to help stock car racing heal from one of its deepest wounds. He’d endured a short-and-undistinguished Camping World Truck Series career between 1995-2000, driving for his family’s team, then for owners Wayne Spears and Jim Herrick. He was recruited by Childress in 2000 as a “project driver,” beginning in the Xfinity Series and working toward a Cup Series teammate with Earnhardt. Based on three victories and third in points, he was the 2000 Xfinity Rookie of the Year. He was scheduled to return to Xfinity in 2001 before going full-time Cup racing in 2002.

But everything changed when Earnhardt died. 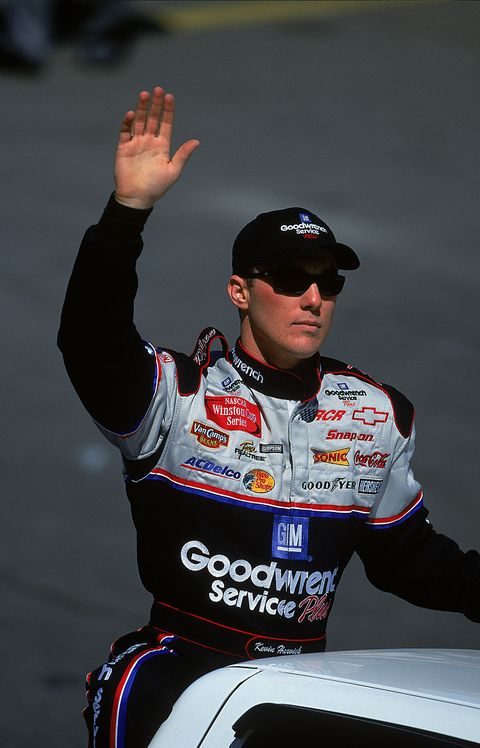 Suddenly, instead of running the full 2001 Xfinity schedule with an occasional Cup race thrown in, Harvick was slotted for the full Xfinity schedule and the remaining 35 Cup races in 2001. Other drivers had run both series at the same time in the past, but nobody had ever replaced an iconic seven-time champion in the process. Three weekends into that cobbled-together plan, Harvick breathed new life into a still-grieving NASCAR community.

He started fifth behind Dale Jarrett, Gordon, Todd Bodine, and Mark Martin in the 325-lap, 500-mile race. With Kevin Hamlin as crew chief, Harvick led 12 laps early, then led the last six as Gordon made a late-race, low-side charge in the waning laps. The MOV was 0.006 seconds, almost too close to call from pit road, but indisputable upon further review. After an impressive and well-received frontstretch burnout, Harvick did his backward victory laps with his left hand out the window, waving three fingers.

Tears all around, from pit road to the NASCAR suites above the grandstands? Are you kidding me?

At the time, he didn’t recognize what his victory meant to racing in general and to NASCAR fans in particular. “I think it gave Dale’s fans a reason to smile again,” Childress said many years later. “I know it lifted up everybody who worked at RCR. It was one of the greatest days in our company’s history.” 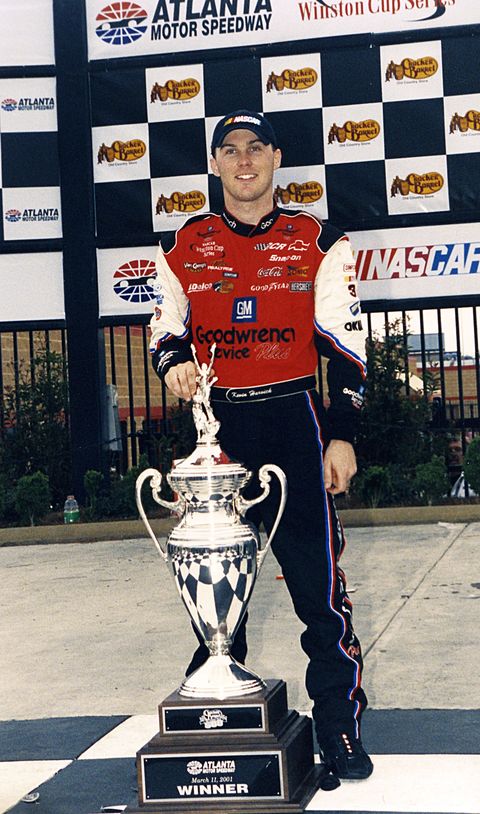 Harvick recently recalled that victory and admitted that it didn’t sink in for quite a while. “It took a couple of years because of everything going on at the time,” he said recently. “It took time to understand the situation (being in Cup quicker than expected) and the magnitude of the situation with me replacing Dale. That was a very confusing moment; it was hard to wrap my arms around the magnitude of that win.”

Even with victories in most of NASCAR’s most prestigious races, Harvick says nothing will ever overshadow the first of his 58 (and counting) victories. “There won’t be a moment that matches that one in my career,” he said. “It took time to appreciate how important that win was to the company, how important it was to keeping RCR going. It wasn’t important just for RCR, but for the sport in general.”

He stayed with the No. 29 Chevrolet team from 2000-2013, winning 23 Cup races, 40 Xfinity races, two Xfinity titles, and finishing top-10 in Cup points nine times. He moved to Stewart-Haas Racing in 2014 and immediately won the Cup title in a Chevrolet. Approaching the twilight of the 2021 season, he’s won an additional 35 Cup races and had seven more top-10 points seasons at S-HR. With 119 victories and three titles over three series – and despite his oft-time boorish behavior – he’s a virtual cinch to eventually reach the Hall of Fame.

• Harvick’s first Cup career victory came in only his third start. Two drivers won quicker: Jamie McMurray in 2002 at Charlotte and Trevor Bayne at Daytona Beach in 2011, both in his second career start.

• Harvick is among nine drivers with championships in two of NASCAR’s three major series: Harvick, Bobby Labonte, Chase Elliott, Kyle Busch, Martin Truex Jr., and Brad Keselowski in Cup and Xfinity; and Greg Biffle, Austin Dillon, and Johnny Benson in Xfinity and Camping World. All told, 36 drivers have at least one victory in all three series. Nobody has won championships in every series.

• The Chevrolet that Harvick drove to victory at Atlanta in 2001 was the same car—renumbered from 3 to 29 and repainted from its traditional black to white with red accent trim—that Earnhardt had driven to victory the previous season at AMS.