Before Hall’s revolutionary discoveries and innovations in the world of racing downforce, cars found themselves like Bambi on ice on certain racetracks. Sports cars either tiptoed through a corner or risked taking on air to the point of lifting down the highest of high-speed straights.

Hall discovered ways to make those racing machines stick to the track. His Chaparrals of the 1960s boasted exaggerated rear wings that made the cars instant fan favorites and the nemesis of just about any other competitor on the track. Sanctioning bodies sometimes didn’t know what to do with Hall’s creations so they just made them illegal.

Hall, 86, lives in Midland, Texas, where he still has a race shop. Many of his race cars are in Midland, and they even hit the track a couple times a year. A local museum curator houses many of Hall’s creations and makes sure they’re in working order.

Hall, a true racing legend in every sense, admits that he came along at the perfect time in racing history. It was a time when innovators were allowed to do their thing. Hall is not so sure there’s a place for real out-of-the-box innovators in racing today or that he would have been able to make his mark like he did in the 1960s and 1970s.

“I’ve thought about that a lot,” Hall told Autoweek in a Zoom interview. “I happened along in a time when there was a lot of latitude to improve the cars. I guess as anything becomes standardized, everybody focuses on the best equipment so they all kind of go the same direction until somebody comes up with a new idea.

“I guess a lot of the ideas that were easily accomplished have been thought of already, so we have cars that are very finely focused around a fine set of specs. I don’t think it’s as interesting.”

Hall is being honored with the inaugural American Speed Festival’s Master of Motorsports award at M1 Concourse in Pontiac, Michigan, this week. In addition, four of Hall’s race cars are expected to hit the track at M1 and will be driven by Hall’s son and grandson. Unfortunately, COVID-19 concerns are keeping Hall at home in Texas.

One of the cars expected on track is his famous Chaparral 2E. Hall calls that his favorite car of the ones he designed. Of course, answering that question is a little like picking your favorite kid. Hall had plenty of winning cars and winning innovations over the years, and he’s proud of them all. 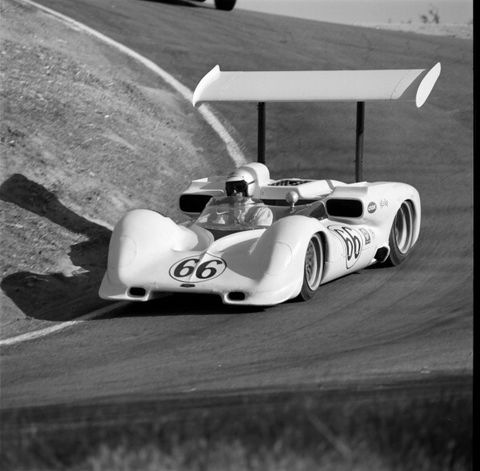 “We started with a brand-new sheet of paper and we decided to put in everything we knew about aerodynamics at that time into that car,” Hall said of the 2E. “It was a major change in how the aerodynamics was handled on race cars, and I think it showed everybody that was a major factor in car design at this point.”

There were some, at least early on, who didn’t buy into Hall’s thoughts on aerodynamics.

“I think after they saw that car, they realized that was a very important feature. A lot of aerodynamic work was done before (the 2E), but generally it was stability and drag. Nobody really focused on download.

“So, I think that was my major discovery during my life …”

“When I realized the affect of download on a car—in like 1963—I realized what a huge benefit it would be to control the download, and monitor it, and make it work for you, instead of having it work against you.

“So, I think that was my major discovery during my life, and if you have one of those you’re pretty fortunate.”

Hall said he was surprised to see some of the greatest racing innovations of his Chaparrals banned—some after less than one season.

“It took us a little by surprise,” he said about the times certain versions of his Chaparral were ruled too far out of the box. “I felt like those cars were really quite nice cars to work on and drive because there were so many good adjustments you could make easily. You could tune the car for almost any racetrack very simply and make it feel good for the driver. I’ve always thought that was an important feature.

“If you’ve got the confidence in where that car is going when you turn the steering wheel, then that makes you fast. And it should be not too hard physically and also give you the confidence of where the car was going to be on the racetrack.”

His wildest car might be the 2J Chaparral that featured—for lack of a better term—a vacuum-cleaner component consisting of two 17-inch fans at the rear of the car that helped to literally suck the car to the track. Makes sense then that Hall calls it his “suction car.” It ran the fastest lap at Watkins Glen and won the pole every time out in 1970 before the FIA stepped in and declared that the car violated a “movable aerodynamic device” ban.

“I was not surprised (at the ban) on the suction car, but I thought at least they’d give me a year,” Hall said. “I thought if you spend all this time and effort and if you bring something exciting to the racetrack, people want to see it run, we wanted to run it and make it successful.

“We never did make that car successful, either, but it was so fast that it scared everybody. And it probably had to be regulated in some way or it would have made the tracks not be able to handle the cars at that speed. But I thought maybe they’d give me another year to run the thing.” 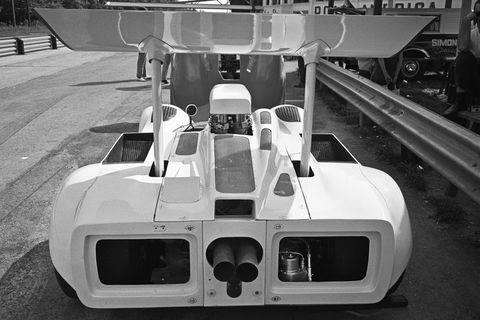 “I always wanted to know how everything worked,” Hall said. “That was a real challenge to me, to find out why does that do that. I think my curiosity about the physical world around me is what probably made me a little different. And I think I had the advantage of sitting in the seat and feeling the changes and then going back and writing the equations for them.

“I just happened to come around at the right time with the right education.”

Hall’s Formula 1 career gave him a chance to shine on the international stage, but he is the first to tell anyone who asks that F1 was a lot different during his time in the series in the early ’60s.

“When I was in Formula 1, it was probably like how smaller club racing is today,” Hall said. “Our team had two mechanics. We had two drivers. Two mechanics and two helpers. That’s kind of the way it worked.

“I was hired by BRP (British Racing Partnership) to run in 1963, and we did rely on the engine supplier to overhaul the engines and send them back. The teams didn’t do that, but they maintained the cars, and whatever development we had during the season was quite small.”

The size of the operation wasn’t the only difference from modern F1. 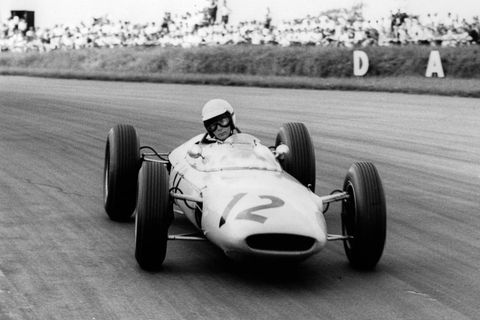 “One of the most exciting races for me to go to was Monte Carlo,” Hall said. “When we went there, we got to practice between 4:30 and 5 in the morning—maybe it was 4 to 5:30—and then they cleared the streets for traffic. So our practice sessions were a little different than the way they do it today.”

These days, Hall doesn’t watch much racing. He says he’d rather get out of the house and play golf. He does, however, relish the role of a racing elder statesmen talking about the good old days.

Hall says he still gets plenty of fan mail, a surprising amount of which comes from young people in Europe.

“Look, I know studying math isn’t any fun, but boy, there’s some stuff you can do with it and with physics that you can really enjoy,” Hall said. “I know I sure did. I think that’s what my real happy moments in life are now—when I hear from some young fella who enjoyed finding out about our cars.”