Cheryl Linn Glass remains an oddly unknown name in motorsport. Unfortunately, across the history of car racing, there have been so few women among the competitors that it’s pretty easy to list most of them by memory, but Glass often gets overlooked, despite her successes. Maybe because her life ended tragically early. Maybe simply because people don’t know about her. But she blazed a trail that wider motorsport is still only just catching up to, from excelling on track to helping Black students get into STEM fields.

Here’s what you should know about Glass: She was one of the very, very few Black women to compete in professional motorsports, something that has unfortunately changed very little since her time. As Road & Track reported a few years ago, she dreamed of racing in the Indy 500 and made courageous inroads into higher levels of motorsport like Indy Lights while running her own small business and mentoring young Black students. But she often struggled to compete outside of the oval tracks and never quite made it to racing’s top levels.

Then in 1991, her home was burglarized while she was sleeping and Nazi symbols were drawn on walls with her own lipstick. She accused two of the burglars of rape, but no charges were filed. Her life went into something of a downward spiral after that, tragically culminating in her death by suicide in 1997 at just 35.

She’d retired from racing in the prior years and her death gets posed as a mystery too often, given it directly involved aggressive racism on a social and structural level. She should, by all rights, still be alive—the end of her life was senseless, premature and cruel. 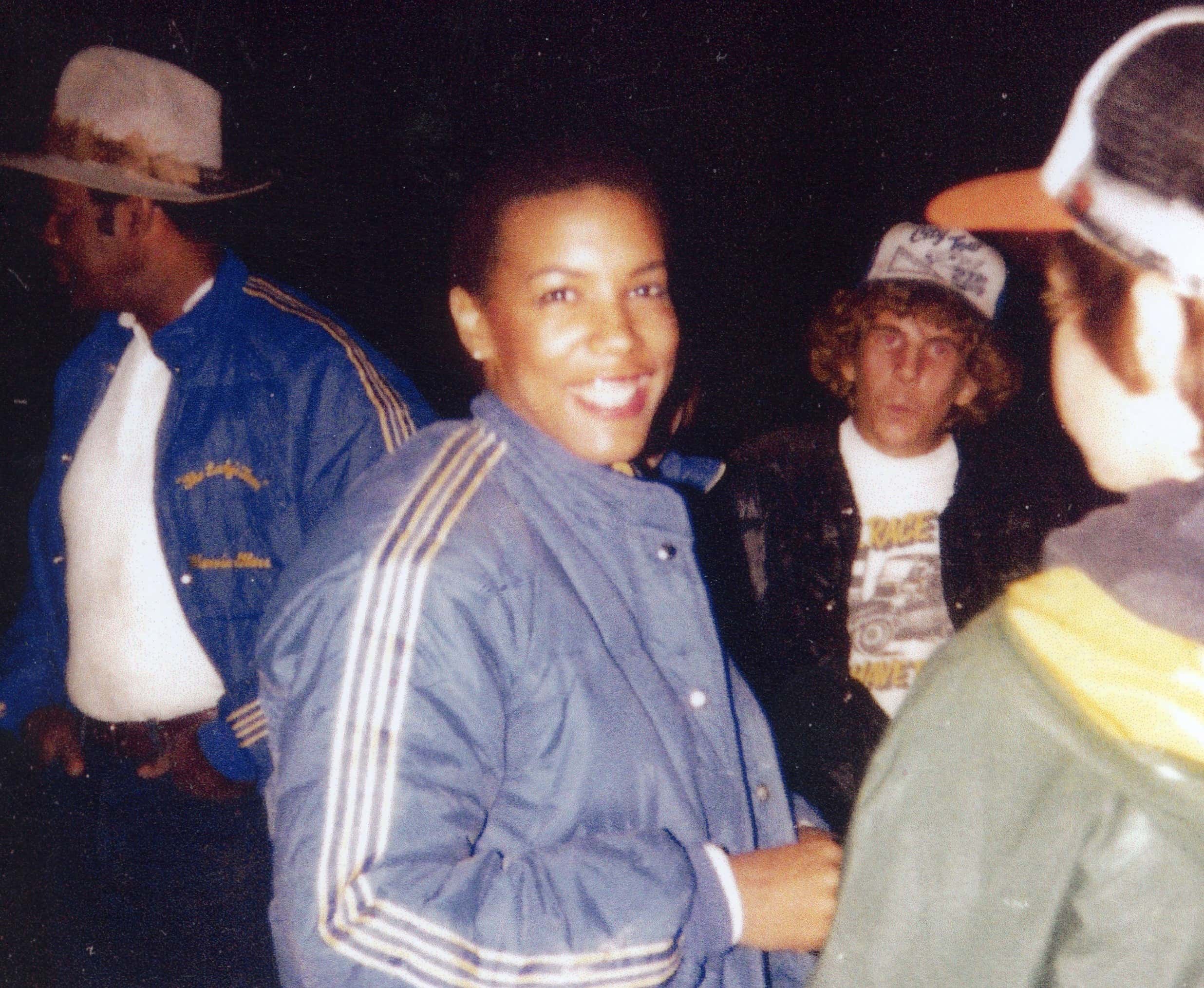 A January 1980 edition of Ebony still provides one of the most thorough looks at Glass as an entrepreneur, model, and successful racing driver when she was still alive. She was only 18 when it was written—barely at the start of her career.

Born in the San Francisco Bay Area and raised in the Pacific Northwest, she got into short-oval sprint car racing as a teenager and quickly established herself as an extremely formidable contender. By 1980, she’d been racing for nine years, having funded an entry to quarter-midgets (the entry-level of sprint cars) with her own business earnings from making high-end ceramic dolls. She’d won rookie of the year, the first woman ever to do so, and just started racing sprint cars, a sort of halfway between sports cars and more formula-style vehicles. She’d paid her own way through racing with her own money as a teenager, and would later run her own custom wedding dress business in Seattle.

One of the important things about Glass is that she wasn’t just a woman who raced—which would have been notable enough, especially because she was also Black—but someone who was incredibly successful. She won trophy after trophy in her progression through the junior ranks and didn’t stop when she started sprint racing. At first.

Glass was successful in racing around Skagit Speedway in Washington, a short oval, when she first entered the top sprint category. She carried on beating her (white, male) peers as she had in the junior competitions. However, she didn’t come from a racing background and she struggled to get any chance to progress, the all-important who-you-know as big a factor then as it still is today.

Her first experience racing sprint cars outside the tracks familiar to her was a borderline-disastrous appearance at the Hoosier Hundred, where Glass was running largely unprepared for the event and hoping to get through it on talent alone. Unfortunately, motorsport is too complex for that—any professional driver can tell you that once you’re out of karts you can’t go in with the hope-knowledge differential too frontloaded, or you’re doomed to fail. Racers like Glass don’t like failure and her dissatisfaction was seen by her then-team boss as she struggled to qualify for the race.

Glass never really got an opportunity again. She made herself one, in the late 1980s, buying her own Indy Lights entry as Cheryl Glass Racing and competing a few times but finding herself frustratingly off-pace and ultimately suffering a serious crash. She never made it to the Indy 500, the goal she set back in her teens, but she did run in some CART races in 1990.

It’s strange just how much of Glass’ history is lost or hard to track down given she was a celebrity in her own right during her racing career. Prentice-Hall published a book about her for children called Off to the Races because her track record was so impressive. It’s depressingly difficult to imagine the same book being published about a Black, female racer today but easy to imagine critics writing it off as unrealistic or too “woke.” But real Glass was, as were her accomplishments. 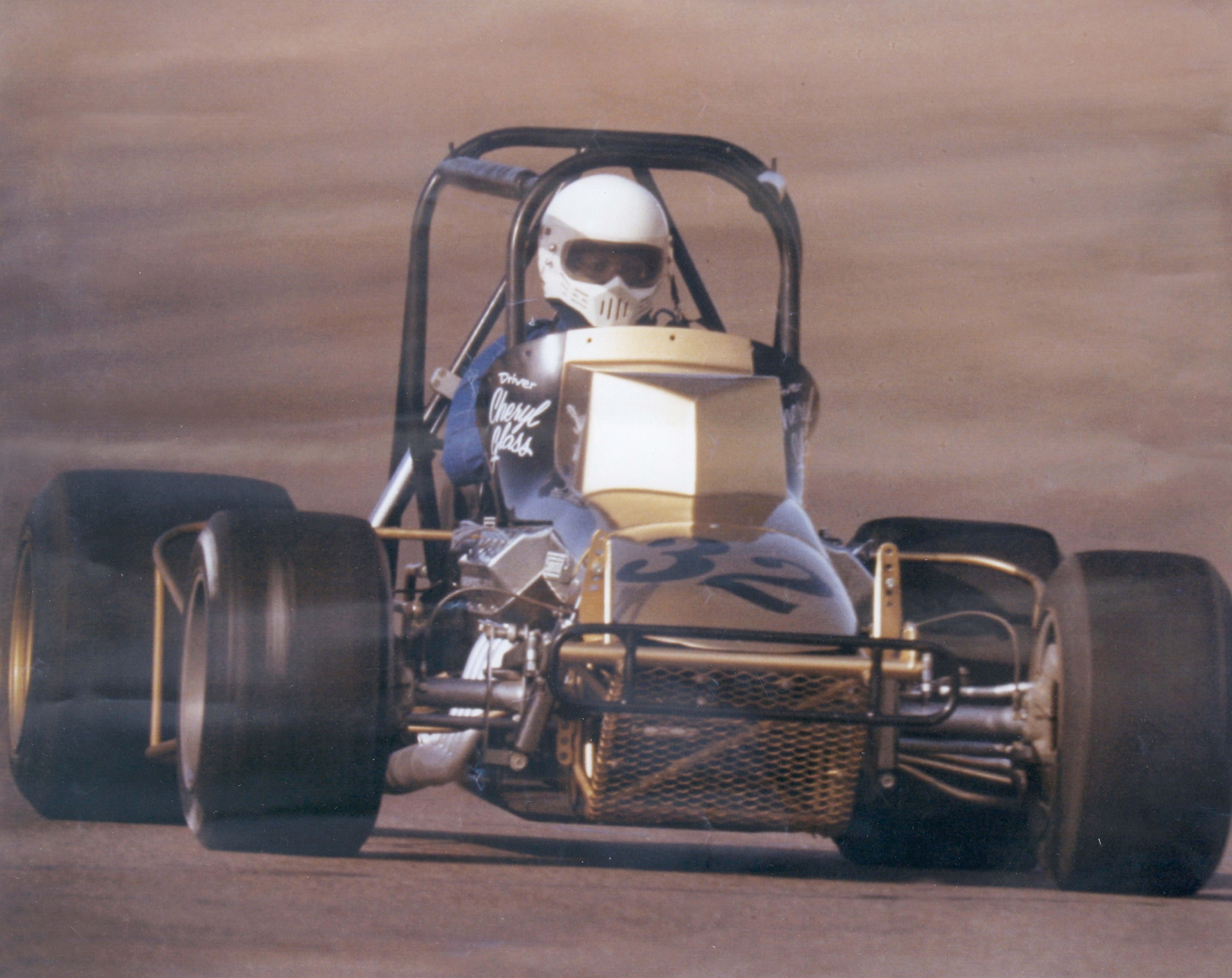 It’s hard not to dwell on the fact Glass is dead. Her story has two sections in most of the ways it’s written out: success and fame on and off track, a life lived on the limit and with great enthusiasm. When she designed her own wedding dress, aged 20 in 1982, she said, “Most of my life I’ve wanted to go for broke, to put all my effort into something and have it be the best there is.”

Glass’ death was the polar opposite. She died of an apparent suicide; her body was found in Lake Union, off the Aurora Bridge in Seattle, Washington, but with no note left to indicate her intent. Her official cause of death was drowning.

The final six years of Glass’ life had not been like the prior 29. Her house was burgled in 1991 and racist slogans were scrawled on the walls. She tried to press rape charges against the intruders but was turned away by the police, R&T reported. Her situation got worse, with police harassing her and more violent incidents happening, like her mailbox being blown up. Glass’ life couldn’t continue the same as it had and after more than half a decade of enduring it, she died.

She shouldn’t have. There’s a bit of an earnest tendency to try and rationalize it but she just shouldn’t have, none of that should have happened in a just world. 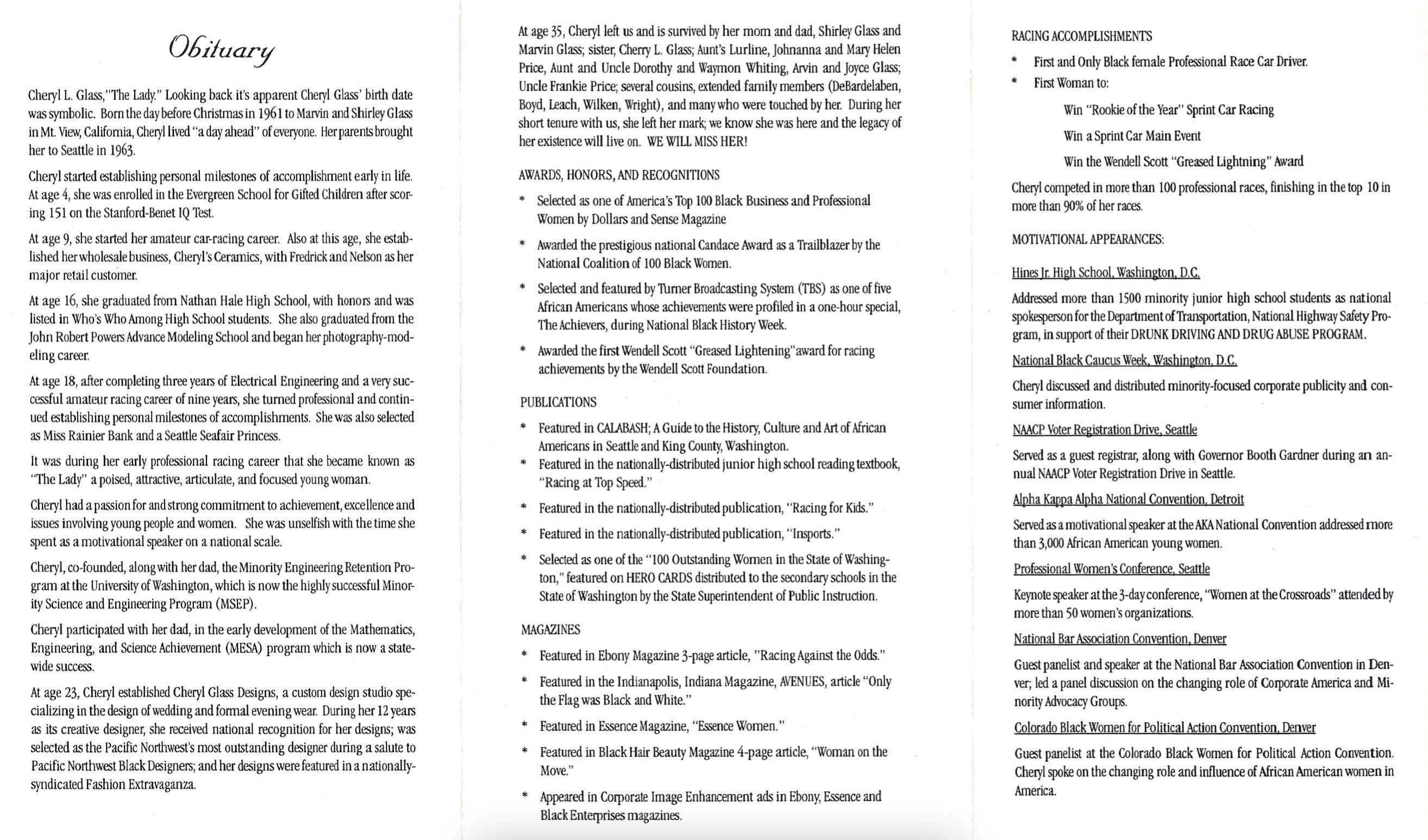 Glass’ obituary from her funeral in 1997.

One of the reasons Glass comes up again and again, I think, is because there’s a mystery to her life more than there is her death: Why didn’t she make it? Glass had exactly the track record a driver needed to accelerate through the ranks of racing. She was extraordinarily marketable, she was smart, and could play the PR game.

There’s this line that, when someone comes along with the results from any underrepresented group in racing (which is to say, someone who’s not a white, straight-presenting, cisgender man), then they’ll immediately be snapped up to higher levels of fortune and fame. It’s not true. Anyone who knows racing can see that even if you do tick all those boxes and have the results and even have financial backing, sometimes it just goes nowhere for whatever reason. Junior careers pulling into the pits and never seeming to get literally back on track, a DNF on the pathway started in karting.

So maybe it just was what it was, to borrow a popular racing phrase for when things don’t work out. But there’s something strange in the way someone so successful never moved past her home turf. You could say she didn’t really have the talent (unlikely) or that the step up to larger cars was too hard (possible, she likely needed training) but there are details that don’t make it that simple.

When Glass entered the Hoosier Hundred, it was her most high-profile event. It was also the most high-profile event on the sprint car calendar at the time, like deciding to make your debut at the Indy 500. It’s too much to say Glass was set up to fail but she definitely wasn’t in the best position to succeed. 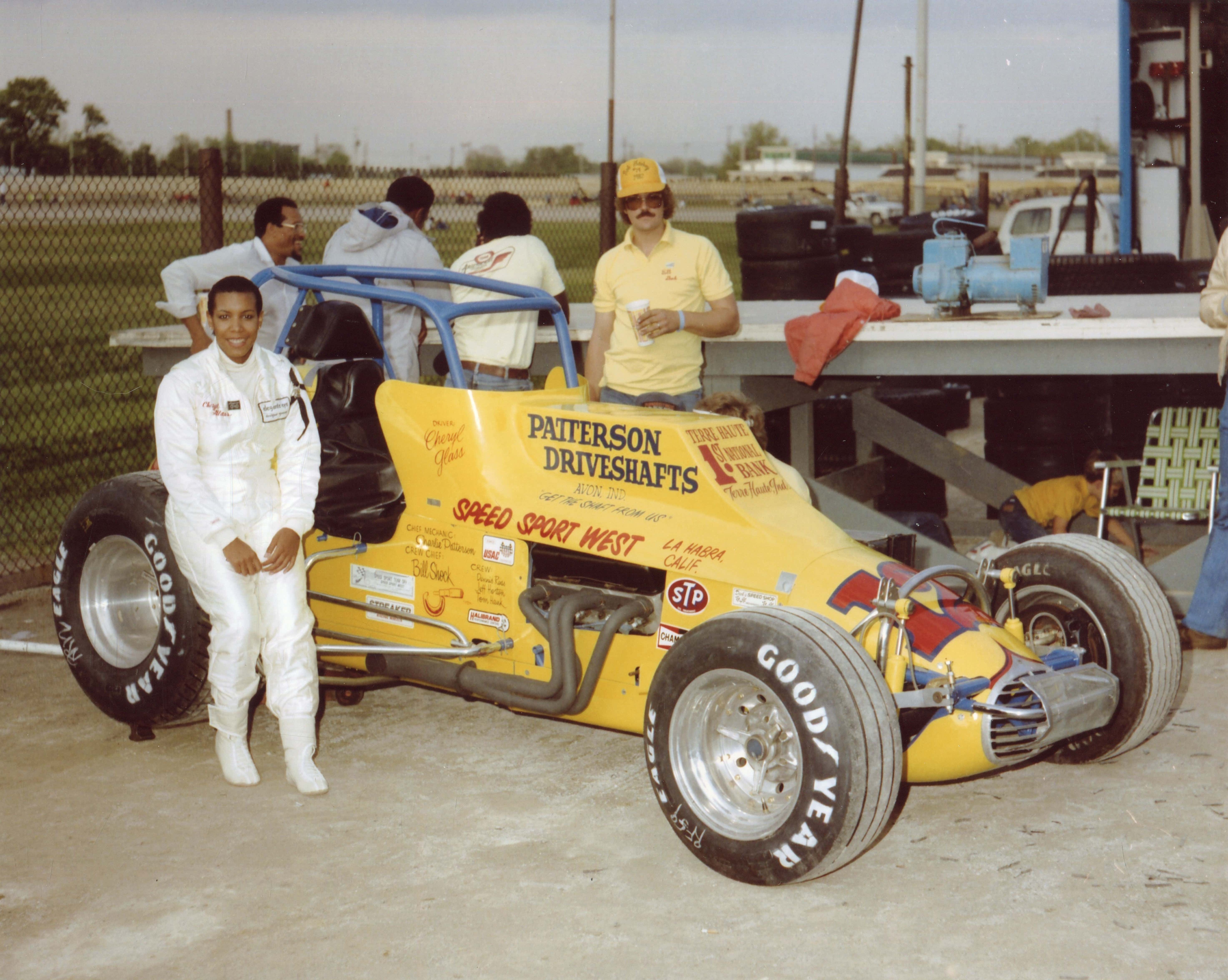 Inevitably, in society and in racing, Glass faced prejudice. She got asked whether she’d faced prejudice for her sex or race when she was contesting the Silver Crown at Indianapolis and said, “Both.”

“Women aren’t supposed to be sprint drivers and most men [in prior racing] really haven’t liked me,” she continued. “Their attitudes have made it very difficult for me to race. But I’ve been accepted around the professional drivers. I was brought up to be very open-minded and never looked at it as ‘I was Black and couldn’t do it.’ I’m determined to prove I can handle it.”

Glass didn’t stop at herself. She worked to actively promote and encourage Black students. Her obituary (above) details multiple speaking gigs, including voter registration drives and direct activism. Glass didn’t just succeed for herself, she turned her mind to confront the structural issues she was acutely aware of—things that still come up today, even for the arguably greatest racing driver in the world.

Cheryl Linn Glass has been dead for 25 years.

Reading Glass’ obituary, the hairs stood up on the back of my neck. Part of it’s having just turned 35 myself, so I know it’s no age for a person’s story to end. And also that Glass’ death was so unjust it seems to stop her from being remembered for anything else. It’s like her death is awkward, an inconvenience to the narrative that she had overcome so much prejudice with such great success only for the cruelty of racist, sexualized violence to end her life. People do not want a narrative where the odds aren’t overcome, to be reminded that it is simply unfair and there is no way to be so brilliant you can outpace a field so stacked against you.

Being extraordinary is complicated for anyone. And if Glass can’t be here today, then the least the rest of us can do is remember who she was and honor her legacy today.

Do you remember Cheryl Linn Glass? Drop memories in the comments or mail me at [email protected]