Shayna Texter-Bauman stands five feet tall and she’s fearless on a motorcycle; currently the winningest Progressive American Flat Track racer in the singles (single-cylinder) division, she was first female to win a flat track race, and later she beat her now-husband Briar Bauman, who is the current back-to-back champion in the Mission SuperTwins segment.

Texter-Bauman told me she didn’t start racing until “later in life” when she was 10 or 11; her brother Cory Texter started riding before she did and her competitive instincts kicked in. Their father Randy was a flat track racer and owned Lancaster Harley-Davidson in Pennsylvania, where they grew up. 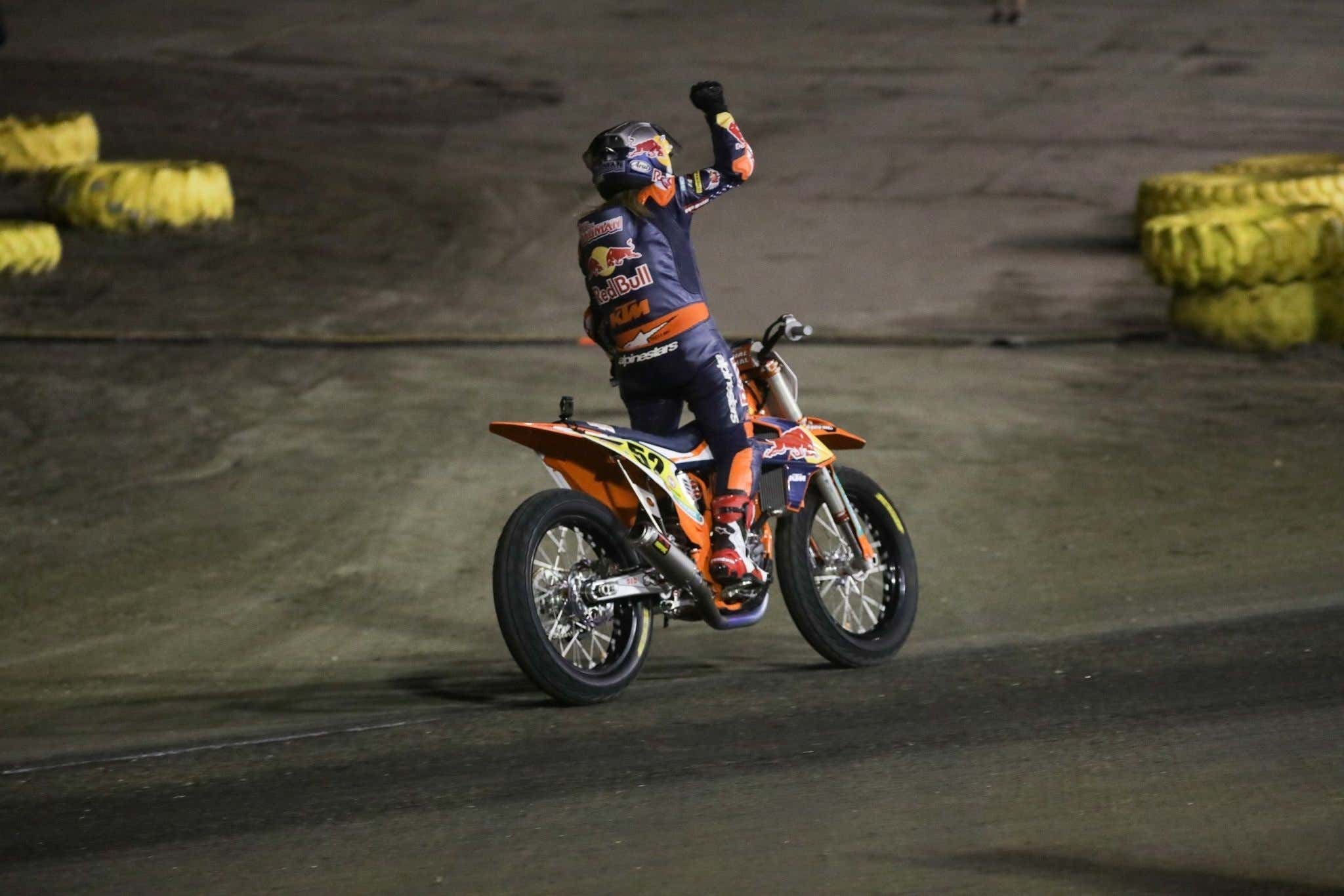 “I was born into racing,” Texter-Bauman says.

It’s true that she has a bona fide moto pedigree: she started riding motorcycles when she was three and her dad was a pro flat track and road racer. Texter-Bauman’s grandfather (her dad’s father) was involved in motorcycles and racing and started the Harley dealership that her dad later owned.

Before she turned pro, the flat track racer was very much into soccer. She wanted to be the next Mia Hamm and play in college; racing took a back seat. Then her motorcycle career took off, and initially, Texter-Bauman’s mom wasn’t at all excited about it. When Texter-Bauman’s father passed away in 2010, the Texter siblings lost not only their dad but his support; they had to learn to grow up fast, figure out how to continue on their professional racing paths, and make solid career choices without him. Their mom rose to the challenge, despite her dislike of the sport.

“I’m not going to lie: she hated it at first,” Texter-Bauman told me. “She put everything into my soccer career and wanted me to go into college with that. But once my dad passed away, my mom stepped up big time and she is my number one fan. She never misses a race and she’s one hundred percent in.”

It’s easy for her to remember her first race: she won on 9/10/11 in Knoxville, Iowa, where her maternal grandfather Glenn Fitzcharles is in the Sprint Car Hall of Fame. Texter-Bauman says racing flat tracks is a lot like the full-contact sport of sprint car racing, but without the roll cages. 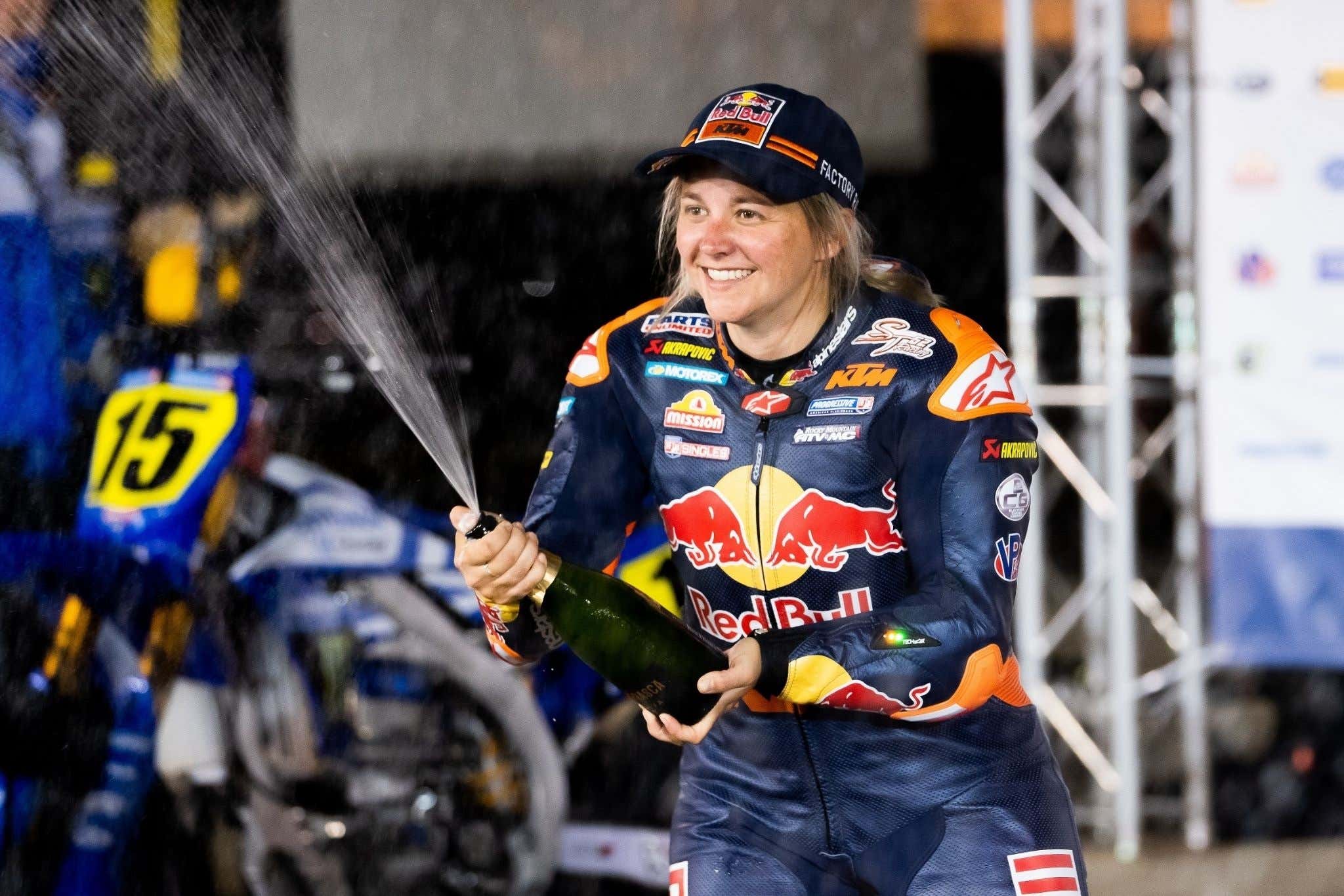 After her freshman year in high school, Texter-Bauman took up online school, getting her diploma and moving on to get her bachelor’s degree in sports management through California University of Pennsylvania. She made a lot of sacrifices, she says, missing prom and graduation in favor of racing; she definitely didn’t have typical teenage experiences.

“Getting my degree was a backup plan, in a sense,” she says. “You never know what’s going to happen, and I want to stay involved in the sport and maybe eventually run my own team. I want to pass on some of what I’ve learned to the younger generation.”

Texter-Bauman is remaining on the racing circuit for now, but when she’s ready to retire she wants to take young riders under her wing.

“I want to help kids transition from competitive teen to professional young adult with a spotlight on them,” she says. “You don’t necessarily learn that from school and if you don’t have someone to help guide you, you don’t know how to handle it.”

Here in Texas, Texter-Bauman and her brother Cory Texter became the first siblings to win Progressive AFT main events on the same day in 2019. Originally scheduled for this weekend, the Texas half-mile competition was rained out so they’ll have to wait until next year to go head to head at the Texas Motor Speedway again. If you’ve never seen a flat track race, you’ll find it’s super intense and it’s undeniably dangerous. Competitors ride in close proximity and knock into each other; while she’s the only woman on the track Texter-Bauman says that when she puts on her helmet, she sees herself as a racer first and a female second.

“The guys bump into me and I bump into them, and we’re all trying to win,” she says. “I think at times I’ve had to work a little differently than the males to prove I’m not just a female rider; I’m a competitor. I’ve had to prove I can win races, and I want to pave the way for more women to enter the sport.”

She has set the example and proven to be a champion over and over again. And there are more victories to come.