Most of the (dedicated) dirt ovals that dot America are small, podunk places measuring a quarter- to a half-mile in length—your classic short track. For a time, though, NASCAR’s Cup series-preceding Grand National division raced on one of their ilk built at colossal scale, 1.5 miles in length, which in its day, would’ve qualified it as a superspeedway. Like other early speedways, Memphis-Arkansas Speedway struggled with fast-track teething issues, but unlike Darlington or Talladega, it didn’t pull through them to become a staple of America’s stock car scene. Instead, the lifeline of American infrastructure reached it too slowly, and Memphis-Arkansas Speedway went belly-up before fading into obscurity.

Memphis-Arkansas Speedway was constructed in 1954 in Arkansas farm country, a short drive west from Memphis, Tennessee. According to books cited by NA Motorsports, the Speedway was a 1.5-mile oval with lengthy 2,500-foot straights joined by corners with approximately 550-foot radii, per Mac’s Motor City Garage. Richard “The King” Petty told Encyclopedia of Arkansas he remembers these turns being steeply banked, though their exact inclination appears to have been lost to time. 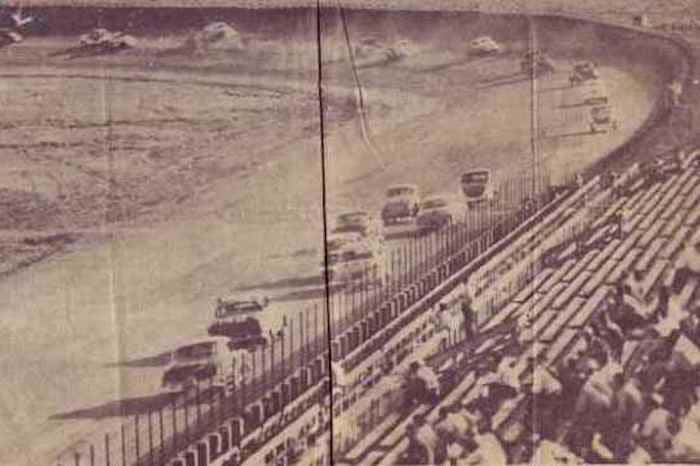 The track’s proprietors allegedly aimed to pave the circuit, but didn’t have the $100,000 (almost $1 million today) it was said to cost, so when Memphis-Arkansas Speedway opened its doors on Oct. 7, 1954, it did so as a dirt track. When it hosted NASCAR’s Grand National series on the 10th for the 1954 Mid-South 250, the 1.5-mile Memphis-Arkansas became the third-longest track on the ’54 GN calendar, and the longest fully dirt track in top-level NASCAR history—a distinction it holds to this day. 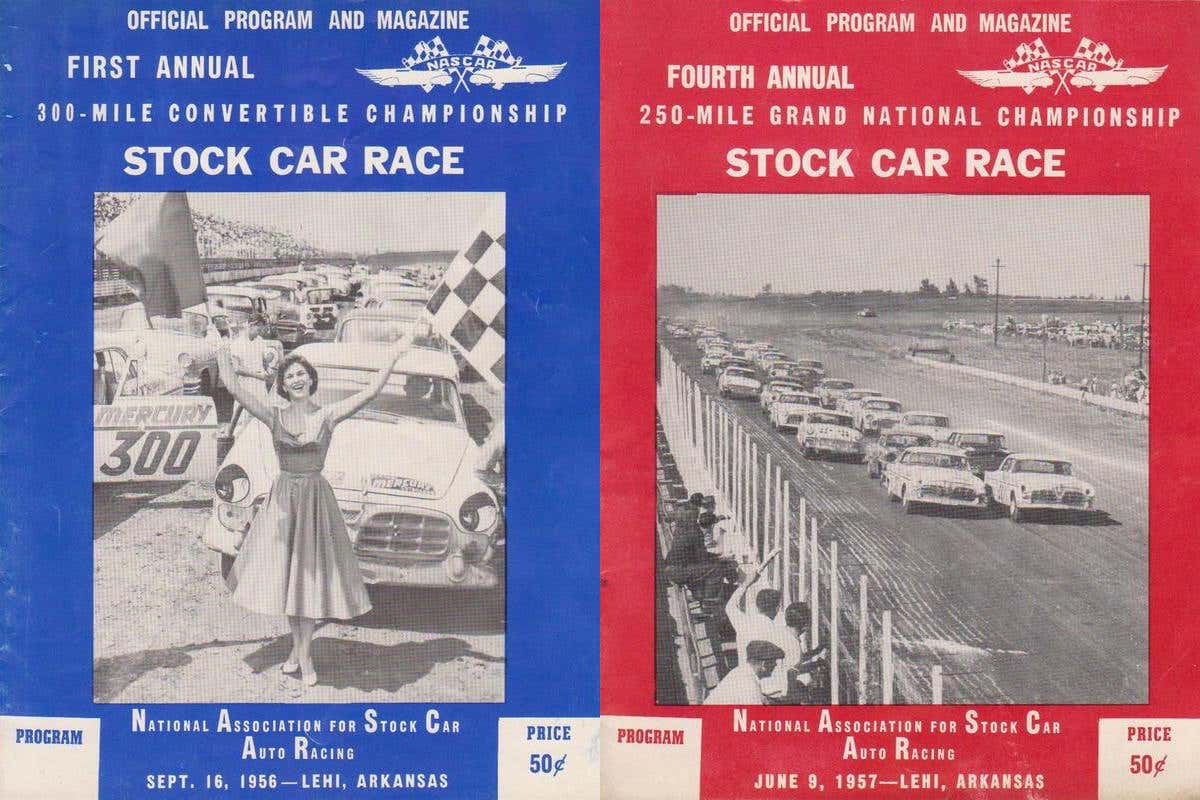 Memphis-Arkansas’s length accorded it some of the fastest lap speeds in the country, with pole laps often hovering around 100 mph according to Racing Reference, and race laps averaging about 90 mph. These speeds and an apparently “unmanageable” racing surface contributed to a pair of deaths at the track, both of them occurring during the 1956 Mid-South 250 race weekend. 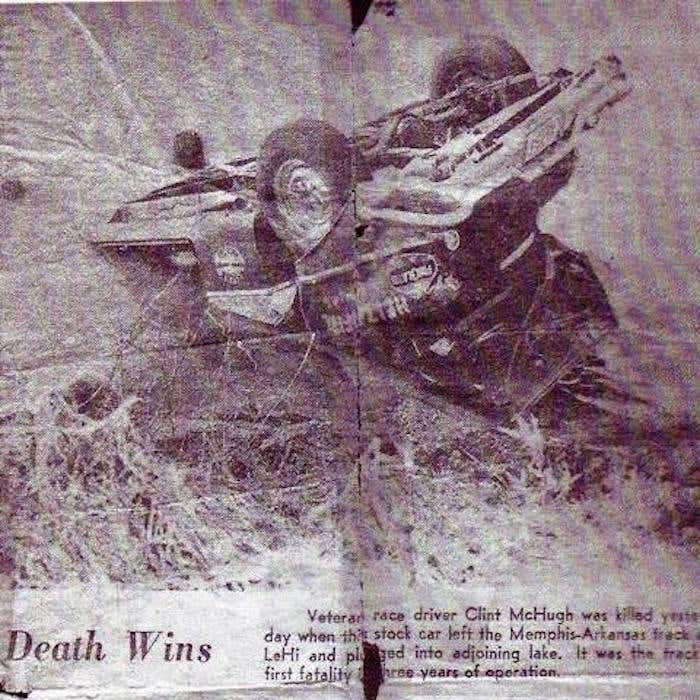 During qualifying, Clint McHugh was reportedly doing about 90 when he flipped his Oldsmobile over a “flimsy” three-foot guardrail outside turn three, tumbling 50 feet down the embankment and into an adjacent lake. On race day, Thomas “Cotton” Priddy’s Chevrolet is said to have lost a wheel and dug into the dirt, flipping end-over-end and ejecting its driver. That crash might be the one depicted in BBC archival footage embedded below, though the footage is too fuzzy to pick out a car number.

Priddy’s death wouldn’t be the last time Memphis-Arkansas’s soft surface ruined a race, either. At the following year’s Mid-South 250, drivers and spectators reportedly waited nearly an hour for a dust cloud kicked up by the cars to clear, and the prolonged race caution with it. This event proved to be Memphis-Arkansas’s last hurrah, as according to an archived blog post, the track’s owners ran out of money thereafter, later selling the facility to a local farmer in 1958.

“We raised catfish in the infield area of the track for a couple of years,” commented landowner Parker Eubanks. “Then we leveled out the grade and bedded rice and grew soybeans in it.”

The track’s finances might have been brought down in part by unexceptional attendance at its last race, which Racing Reference registers at just 9,500 of the bleachers’ reported 15,000 capacity. Though close to Memphis, the track wouldn’t have been as accessible back in the day, as circa 1957, Interstate 40 apparently hadn’t yet reached Lehi, Arkansas, where the track was located. 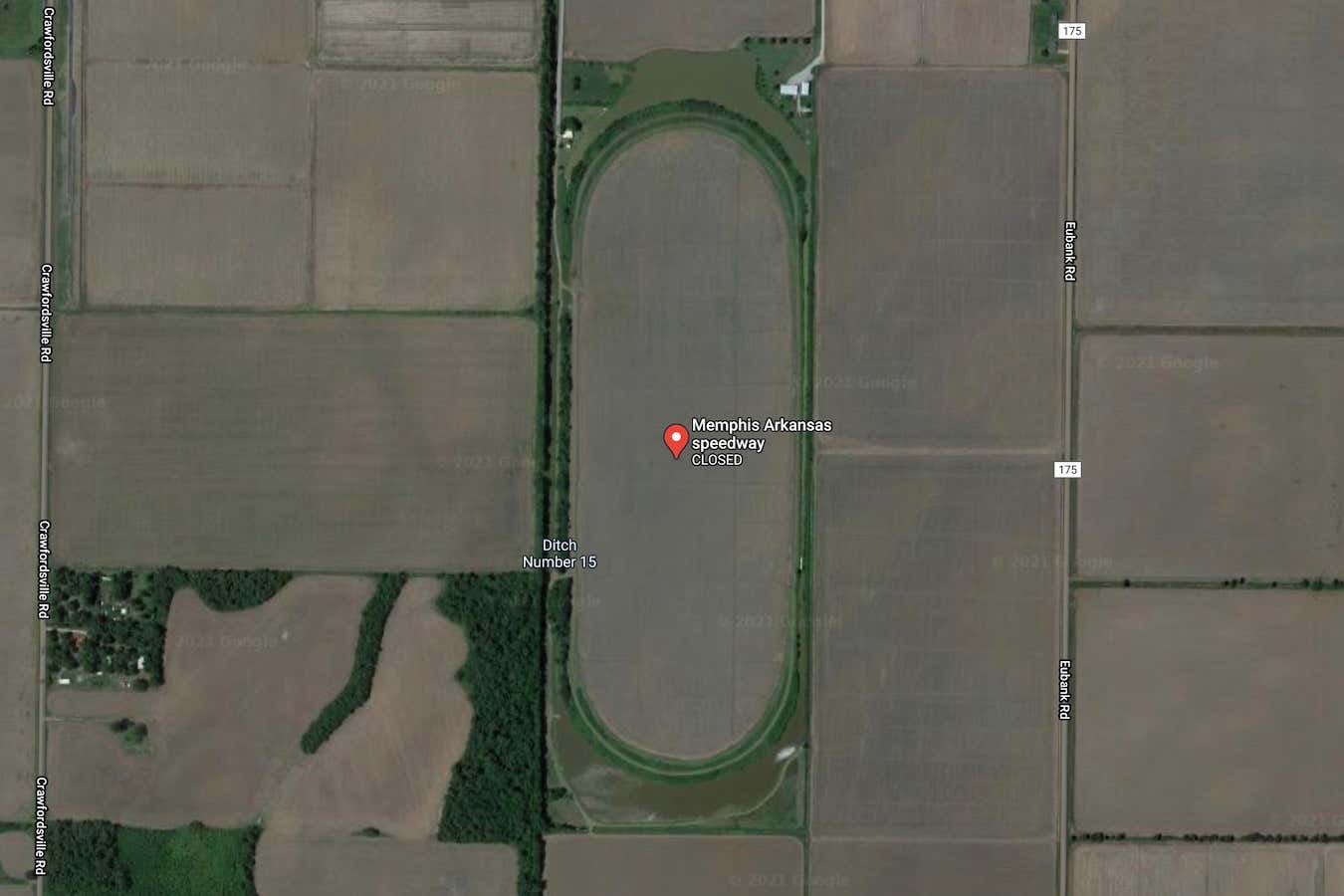 Memphis-Arkansas Speedway’s remains from above, circa 2021

As for those remains, they can still be seen from Google Maps, where the unmistakable shape of an oval can be seen carved into the landscape. Though the closest street-level view of the track was snapped a quarter-mile away, we can get some idea of what facilities survive in a brief clip of the track captured in 2016 (embedded below).

Unsurprisingly, there’s not much left aside from some of the racing surface, though given it had already been some six decades since anyone last gave a damn what shape it was in, that former racetrack was still recognizable as one is a miracle in itself.