After spending much of the summer being the poster child for booming new electric vehicle startups, and then inking a multibillion-dollar production deal with General Motors, would-be EV truck company Nikola found itself on the defensive following bombshell accusations of fraud and technological incompetence. These claims were leveled by Hindenburg Research, a self-described “forensic financial research” firm that’s also taken a short position against Nikola’s now publicly-traded stock. On Monday, Nikola executive chairman and founder Trevor Milton issued a rebuttal of the explosive claims, but it’s raising even more questions about what’s going on behind the scenes.

Not all of the allegations from Hindenburg are even addressed, but there’s at least one instance of Nikola admitting that Hindenburg was right on a major charge: it really did roll a non-running truck down a hill for the misleading “in motion” video released in 2018.

Nikola’s statement said the Hindenburg report “was designed to provide a false impression to investors and to negatively manipulate the market in order to financially benefit short-sellers, including Hindenburg itself.” It has also referred the case to the U.S. Securities and Exchange Commission. The company maintains it is on track to make battery-electric semi-trucks available to customers by the fourth quarter of 2021. Last week Milton also lashed out against the firm on Twitter, drawing parallels to Tesla’s Elon Musk, another EV charismatic startup executive unafraid of lobbing bombs on social media, often to his own detriment.

But today, Hindenburg Research released its own response to Milton’s response, putting the two entities in a war of words that may end up getting settled in a courtroom. Let’s run down the highlight reel of allegations.

Nikola Rolled a Truck Down a Hill for a Promo Video

Using Google Maps data, Hindenburg Research managed to track down the location for the Nikola One’s splashy promo video and discovered that it was filmed on a long, shallow downhill stretch of road in Utah. A test performed with a rental car in neutral showed it was possible to roll from a dead stop and get up to 56 mph over the 2-mile stretch, making it a pretty open-and-shut case that Nikola sent a nonfunctional roller coasting down the hill and pretended like it was driving.

But now Nikola has acknowledged that’s true—sort of. The “feature-complete”-sounding response admits that a nonfunctional prototype truck was rolled down the hill, though it farms out responsibility for the decision to an unnamed “third party” production team. But in a bit of wordplay, it claims the company never actually said the truck was driving, pointing to the specific use of the phrase “in Motion” in the title.

“Nikola described this third-party video on the Company’s social media as ‘In Motion.’ It was never described as ‘under its own propulsion’ or ‘powertrain driven.’ Nikola investors who invested during this period, in which the Company was privately held, knew the technical capability of the Nikola One at the time of their investment. This three-year-old video of a Nikola prototype is irrelevant except for the fact that the short seller is trying to use it for its main thesis. The fact is, Nikola has real working hydrogen fuel-cell powered semi-trucks.”

Show Truck Was Also a Roller

The Nikola One show truck at the company’s December 2016 unveiling was also non-functional. But the company claims that it’s all a semantic debate because Nikola One powertrain components had been bench tested before the decision was made to redirect resources away from making it move under its own power, so the prototype was “designed to work,” which is not the same thing as actually working.

This was first reported by Bloomberg earlier this summer, leading to legal threats from Nikola against the news service.

Hindenburg also claims dummy animations were loaded onto the screen, and hydrogen decals were applied to the truck despite it being designed to run on natural gas. So not only was the vehicle mechanically non-functional, much of the technology inside was not complete either. But speaking of hydrogen…

The Hindenburg report also accused the company of nepotism, saying that executive Trevor Milton hired his brother, Travis Milton, to be in charge of building out the company’s hydrogen infrastructure. It claims the latter Milton is unqualified for this, saying he has little relevant experience having only worked as a self-employed building contractor in Hawaii prior to joining Nikola as its Director of Hydrogen Production/Infrastructure.

In response, Nikola says “Travis Milton previously owned and operated his own construction company preparing him for hydrogen station infrastructure and buildouts.” Not much of a rebuttal there considering the complicated logistics involved with the safe dispensation of hydrogen gas.

And as far as claims that the company isn’t producing any hydrogen right now, they seem to be true with caveats. Nikola has a deal with Nel ASA—a well-known manufacturer of hydrogen-producing equipment—to build a facility at its headquarters capable of producing 40,000 kilograms of hydrogen per day. As of now, however, the company only has storage for hydrogen (and just 1,000 kg of capacity.)

Prior to the GM deal, which will see Nikola’s trucks use the General’s new Ultium battery packs, Nikola had been teasing breakthrough battery tech to deliver on its impressive-sounding range and power promises. This technology, which didn’t exist yet in the marketplace, would come from a U.K. supplier called ZapGo. Nikola paid ZapGo $2 million before it was revealed that ZapGo’s products were vaporware and the British company was in hot water over apparent tax fraud. According to court docs obtained by Hindenburg, Nikola found out about ZapGo’s deceit as early as December 2019, though Milton continued to talk about the promised magic battery for several more months.

Nikola’s side of the story is that Milton’s public statements regarding its battery tech in the first months of 2020 weren’t related to ZapGo. Instead, Nikola says Milton was referring to the upcoming fruits of a partnership with a “leading academic institution.” It did not offer a name of said institution.

It would be fair to suspect that as soon as Nikola posted this rebuttal on Monday—and Hindenburg Research finished reading it—it began to write up a refutation for Nikola’s response. At 5,300 words, it has certainly been busy since Nikola made its comments.

Titled “We View Nikola’s Response As a Tacit Admission of Securities Fraud,” it refutes many of the points that Nikola makes in its rebuttal, claiming that the language was sculpted carefully by lawyers, and that—just as we have said—many of the points Nikola makes are more or less admissions or non-answers. It also lists every point that Nikola chose not to respond to. In total, Hindenburg says 43 out of its 53 points were unaddressed.

“Despite claiming to have found ‘dozens’ of inaccuracies with our report, Nikola’s response essentially validated all of the issues we raised,” the latest Hindenburg reply said. The rest of it goes like this: 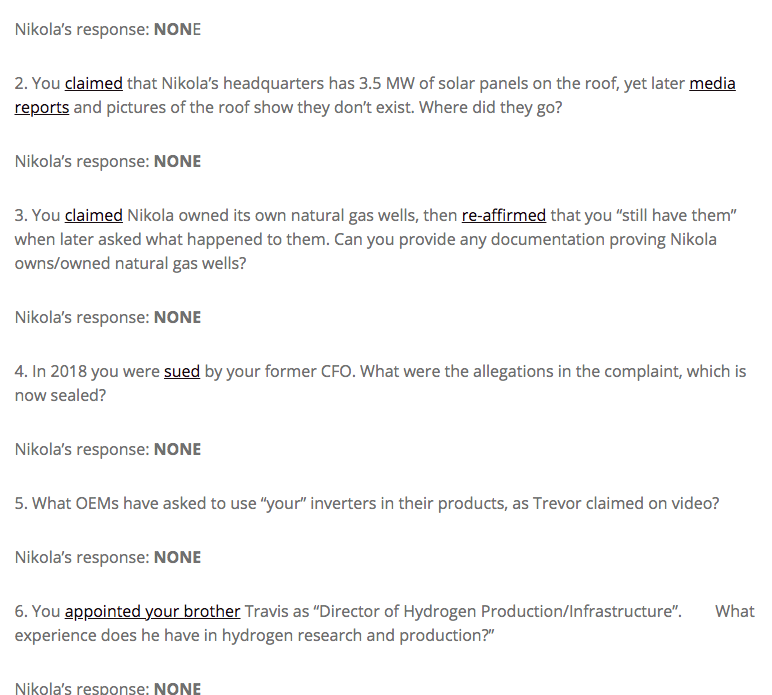 In other words, if Nikola thought its latest statements would settle this debate for good, it was quite mistaken.

As ever, it’s worth noting these allegations were made by an entity with a vested interest in Nikola’s stock price going down. But if Nikola thought its latest statements would iron everything out, it was wrong.

GM’s CEO Mary Barra says that their deal was done with just as much scrutiny as any other agreement at this level. And she defended the deal as helping GM achieve scale with EV production.

“We will still compete fiercely as it relates to go-to-market with our strong brands like we do today,” Barra told CNBC. “This is just a more efficient way to do it. It gets us scale faster, so it’s good for the customer but also is good for the General Motors shareholder cause our technology is being used more broadly.”

However, GM’s stock price, and that of Nikola, took a hit since these allegations were made. I would certainly like to hear more details from a source other than a short-seller who would seek to gain from Nikola’s failure, or Nikola itself, to say the least.

If you know anything about it, you can contact The Drive here, or via our secure ProtonMail account.